A number of today’s best performing, PCIe Gen 4 solid state drives are built around Phison’s E18 controller. If you remember, way back when the AMD Ryzen 3000 series debuted, a number of SSD providers also launched Phison PS5016-E16 based drives alongside the processors to highlight some of the benefits of the platform's PCI Express Gen 4 bandwidth. Those early drives paired the Phison E16 with some of Toshiba’s BiCS4 NAND flash memory and SK Hynix DRAM to produce some fast SSDs at the time, but the E16 wasn’t actually a native PCIe 4 solution. Soon thereafter, Phison began talking about its follow-on E18 controller, which would offer a number of significant benefits. The E18 would be native PCIe 4, produced on a more advanced 12nm process node, with additional processing resources, support for 1,600MT/s NAND, and it would comply with a newer NVMe spec.

Phison E18-based drives are already shipping from a number or partners, like Corsair and Sabrent, for example. However, the drives currently on the market feature Micron B27B 96-Layer 3D TLC NAND flash memory operating at up to 1200 MT/s. The Phison E18 can support even faster NAND though, which brings us to the development vehicle we’ll be showing here. The next wave of Phison E18 based drives will feature Micron’s latest B47R 176-Layer 3D TLC NAND operating at speeds up to 1600 MT/s. Micron’s B47R features the company’s second-generation Floating Gate technology, and offers up to 35% faster read and write latency in comparison to its older high-volume, floating-gate 96-layer NAND. And versus 128-layer replacement-gate NAND, read and write latency are improved by over 25%.

Phison set us up with an E18 development drive, packing 2TB of Micron’s B47R NAND Flash, to give you all a glimpse at what some next-gen solid state drives will be able to do. So, without further delay, let’s get right to it...


Find Phison E18 Solid State Drives @ Amazon
The Phison E18’s main specifications and features are listed above. Its native PCIe Gen 4, 8-channel controller is manufactured on TSMC’s 12nm node and features a trio of Arm Cortex R5 processors in conjunction with a pair of proprietary Phison CoXProcessors, for five total cores. It supports capacities up to 8TB and End-to-end Data Path Protection, Smart ECC with Phison’s 4th Generation LDPC Engine, and Hardware AES (AES 128/256 bit), SHA (160/256/512), and RSA 4096 with full support for TCG Opal 2.0 and Pyrite encryption. Peak transfer rates are expected to be in the 7.4GB/s range -- give or take. 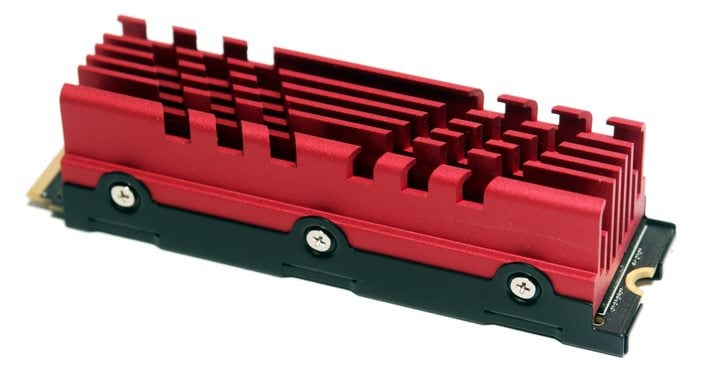 The physical drive we received uses the common M.2 2280 form factor and was adorned with a large heatsink. Reps from Phison note, however, that the heatsink is not an absolute necessity. Throughout testing, it did get warm to the touch but we never saw internal temperatures (as reported by CrystalDiskInfo) exceed 65°C.

The thermal pads on the heatsink did a number on the markings on the various chips populating the PCB. If things were easier to read, what you’d see are eight pieces of Micron B47R 176-Layer 3D TLC NAND operating at 1600 MT/s (this is a 2TB drive), along with the Phison E18 controller and a couple of pieces of SK Hynix DDR4 RAM. This type of configuration is what we’re likely to see on next-gen, high-end, enthusiast-class SSDs. The B47R media on this drive will be available in two grades: media grade and Fortis. This drives uses Fortis grade media, which is the higher performing of the two and most likely to be used on premium E18 SSDs moving forward.

Before we get to any benchmarks, we should note that this drive features pre-production firmware and may not be indicative of retail-ready product. That said, this is one of the first, fully-working / bootable firmware revisions, and Phison expects performance to improve when drives hit retail.

Under each test condition, the SSDs showcased here were installed as secondary volumes in our testbed, with a separate drive used for the OS and benchmark installations. Our testbed's motherboard was updated with the latest BIOS available at the time of publication and Windows was fully updated. Windows firewall, automatic updates, and screen savers were all disabled before testing and Windows 10 Quiet Hours / Focus Assist was enabled to prevent any interuptions. 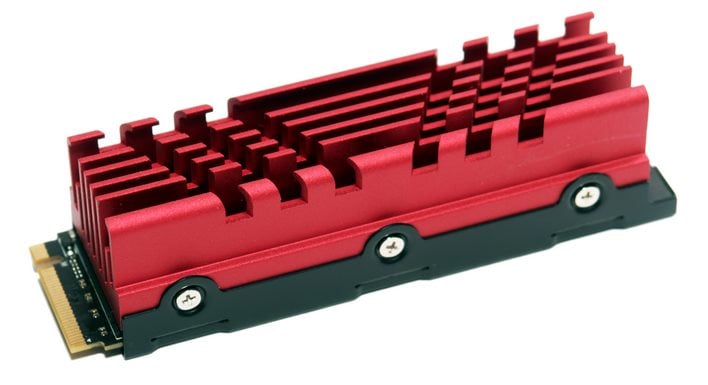 In all test runs, we rebooted the system, ensured all temp and prefetch data was purged, waited several minutes for drive activity to settle and for the system to reach an idle state before invoking a test. Also note, we completely revamped our test bed recently, so the numbers shown in this evaluation aren’t comparable to some previous articles. All of the drives here have also been updated to their latest firmware and where applicable.

Though IOMeter is a well-respected industry standard benchmark, the fact of the matter is, though our results with IOMeter scale, it is debatable as to whether or not certain access patterns actually provide a valid example of real-world performance. The access patterns we tested may not reflect your particular workload, for example. That said, we do think IOMeter is a reliable gauge for relative throughput, latency, and bandwidth with a given storage solution. In addition, there are certain highly-strenuous workloads you can place on a drive with IOMeter, that you can't with most other storage benchmark tools. 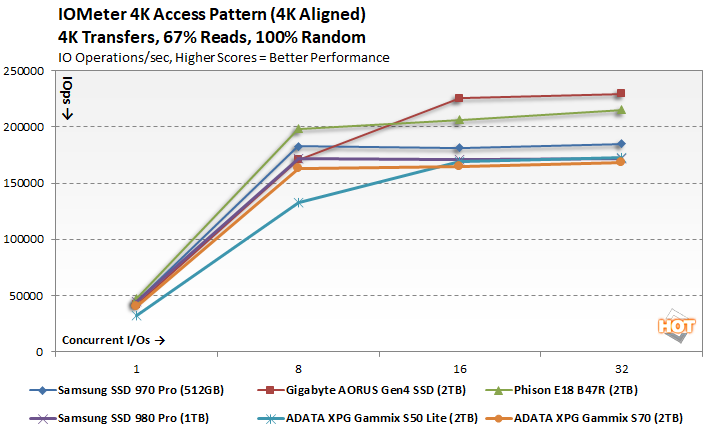 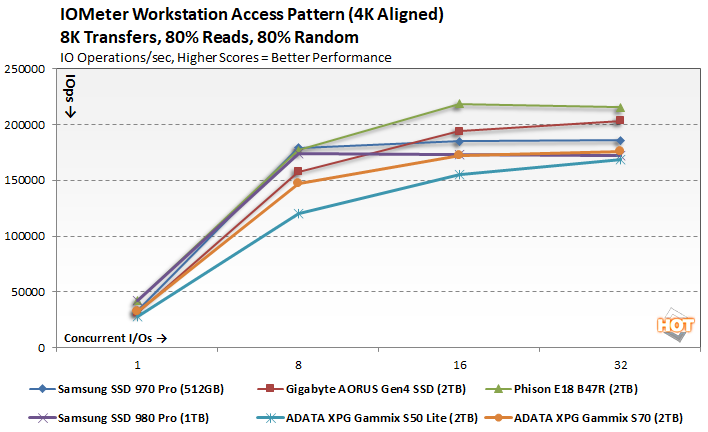 With the fully random 4K access pattern, the Phison E18-based drive led the pack up to QD8, at which point the E16-based Gigabyte drive slipped into the pole position. With the 8K access pattern, which works on sequentials into the mix, the E18 effectively led the pack -- thing were tight at QD1 and QD8, but the E18 pulled ahead at the highest queue depths.

The actual bandwidth results show the Phison E18 development drive clearly leading the pack. The results shown here are the average bandwidth for the drives, across all of the queue depths we tested. Whether the access pattern was fully random or has some sequential transfers in the mix, the Phison E18 with Micron B47R came out on top. 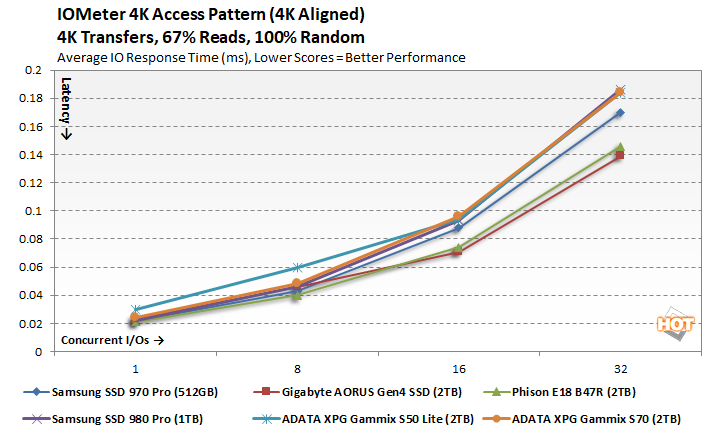 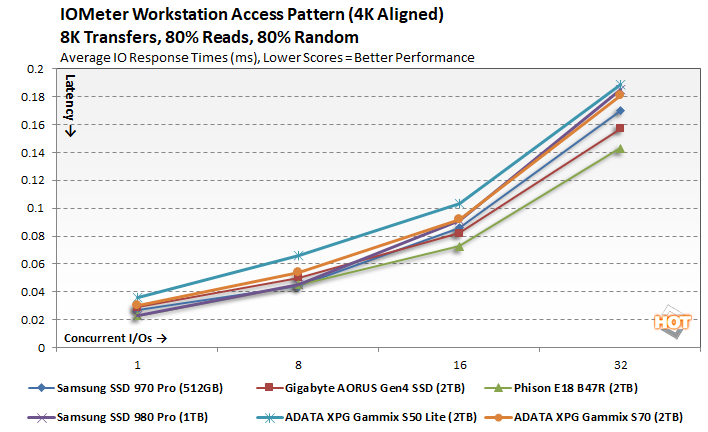 The Phison E18 with Micron B47R also offered excellent latency characteristics. At the lower queue depths with the 4K access pattern (which are the most important for consumer workloads), the E18 had the lowest latency. And with the 8K access pattern, the E18 with B47R led across the board. 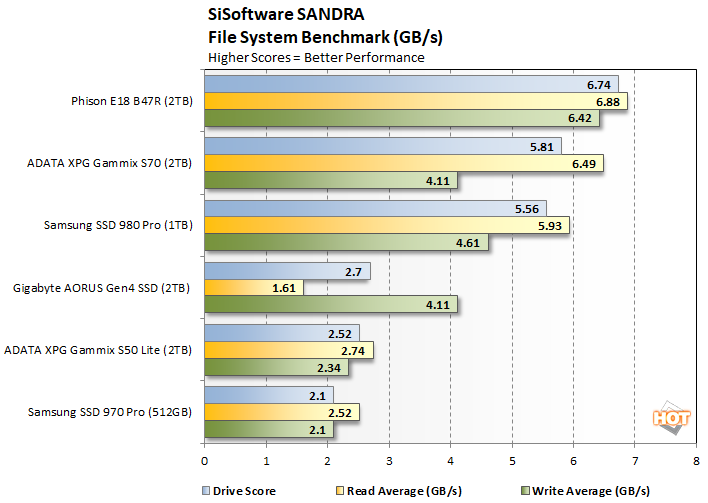 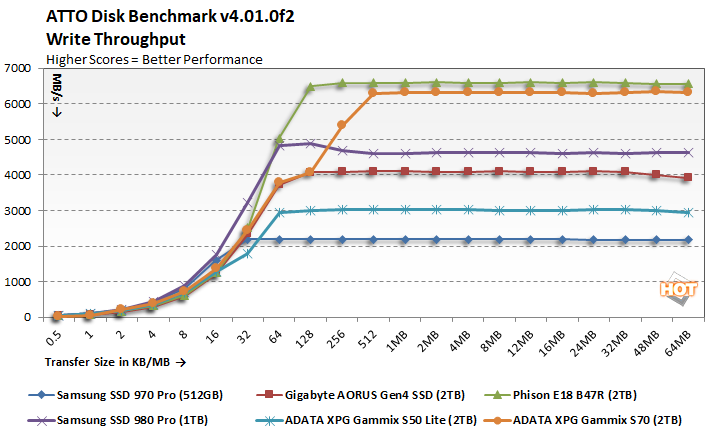 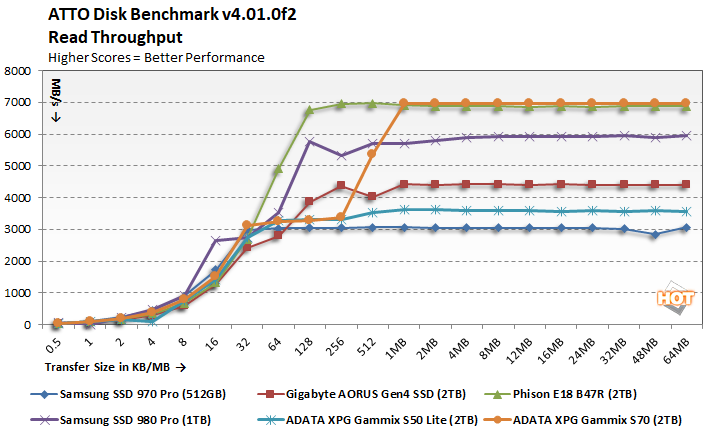 The ADATA XPG GAMMIX S70, which is built around the 8-channel InnoGrit IG5236 controller and 96-layer Micron NAND, offered ever so slightly better reads with the largest transfer sizes in ATTO, but other than that section, the Phison E18 with Micron B47R outpaced all of the other drives with the larger transfer sizes. With the smallest transfers, all of the drives are tightly grouped until about the 32K mark, where Phison begins to pull away. 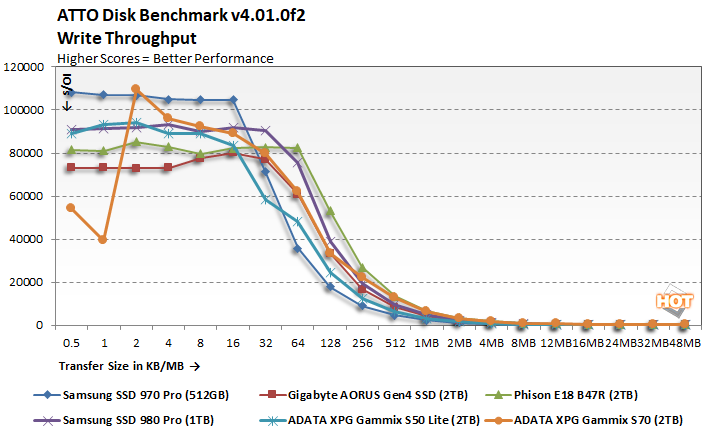 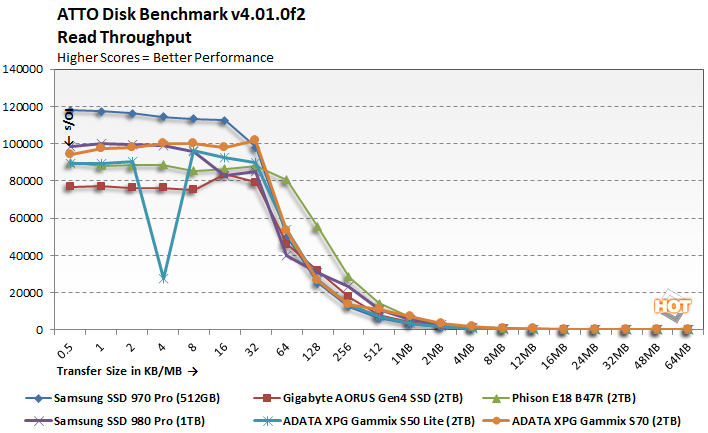 IO performance according to ATTO had the Phison E18 with Micron B47R finishing about in the middle of the pack, save for a stretch between 32K and 1MB where it led the pack. 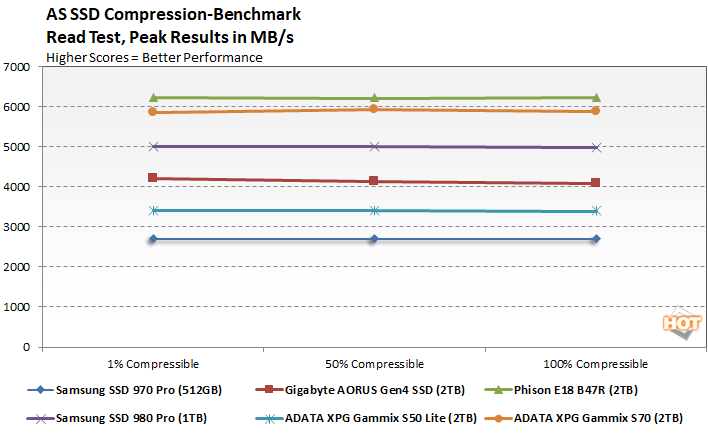 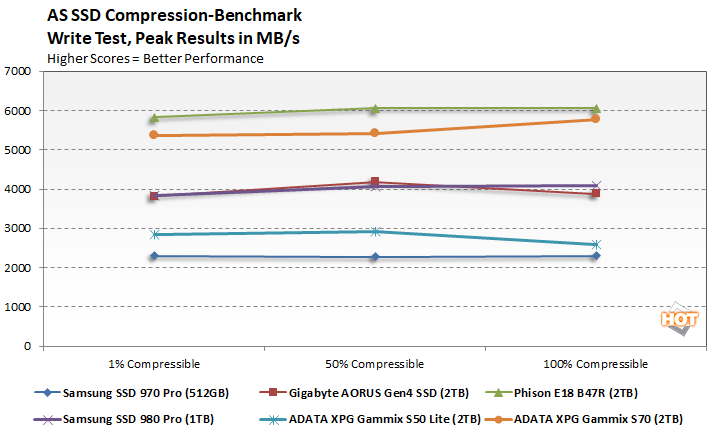 The compressibility of the data being transferred across the drives we tested had little to no impact on overall performance. And once again, we see the Phison E18 with Micron B47R leading the pack in terms of read and write throughput.