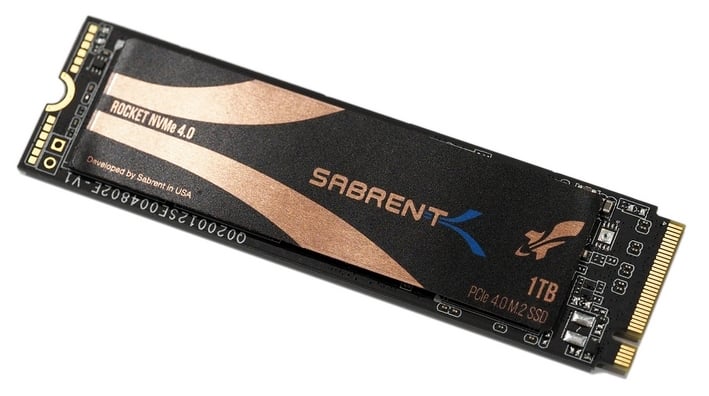 It's been nine months since AMD unleashed its Zen 2 processors and, more importantly as it related to this article, the X570 chipset with its PCI Express 4 connectivity, into the world. In the time since then, there hasn't been a torrent of extra-fast flash released by all that many storage vendors; even at launch, we only had Gigabyte's Aorus PCIe 4 SSD on hand to test. Considering that Gigabyte's drive could far outstrip the bandwidth available in PCI Express 3.0 x4 drives, while putting up some solid IOPs figures, it seems that those who feel a need for speed would want these drives, assuming they had a motherboard with a processor and chipset capable of pushing it to the limit.

That seeming dearth of products flooding the market stands in stark contrast to Ryzen's continued dominance in the world of DIY PCs. This seems like a market just ripe for the picking. The good news is that Sabrent has seen that opening and has attempted to fill that void with its Rocket NVMe 4.0 line of M.2 SSDs. Today we're going to take a look at the 1 TB variant of that drive, which is built on Phison's PS5016-E16 controller. That's the same controller as Gigabyte's PCIe 4.0 SSD, and one of the the only SSD controllers that's widely available at the moment, that can handle fourth-generation connectivity.

Because of its beefy specs and relative lack of competition—Gigabyte's Aorus PCIe 4 SSD and Corsair's MP600 appear to be the only other widely available PCIe 4.0 SSDs for now—Sabrent has priced this drive into premium territory. The 1 TB drive we're looking at today rings up at $199 on Amazon while the smaller 500 GB drive lists for $119. On the other end of the spectrum, Sabrent's largest model at 2 TB will cost an eye-popping $399. Still, at the time it was released back in July, it was the most budget-friendly PCIe 4.0 SSD around. That still rings true today.

Sabrent released two mostly-identical versions of the Rocket NVMe 4.0: a plain gumstick and a drive bundled with a large and rather extravagant-looking heat sink, complete with a trio of copper heat pipes. All three capacities are available with or without the cooler, and the extra accessory seems to add around $20 to the retail price. The model we received for review does not have the heat sink bundled, so bear that in mind when perusing our test results. The Rocket's manual says a heat sink is required for PCIe 4.0 use, but many motherboards these days come with integrated cooling, so even the version without the heat sink included should be up to the task.

Perhaps owing to its premium pricing, Sabrent ships the Rocket NVMe 4.0 in a pretty spectacular package. Beneath the dark, minimal cardstock is a coppery rose gold aluminum shell sealed by a sticker which bears the drive's capacity and serial number. This case, which is a bit smaller than a box of curiously strong Altoids, holds a shock-absorbing foam padded interior and, finally, the Rocket NVMe 4.0 itself. The drive has a black and copper label that probably doesn't do much for heat dissipation. We'll see how the drive fares under sustained loads later on. For now, let's dive into the Sabrent Rocket NVMe 4.0's specs. 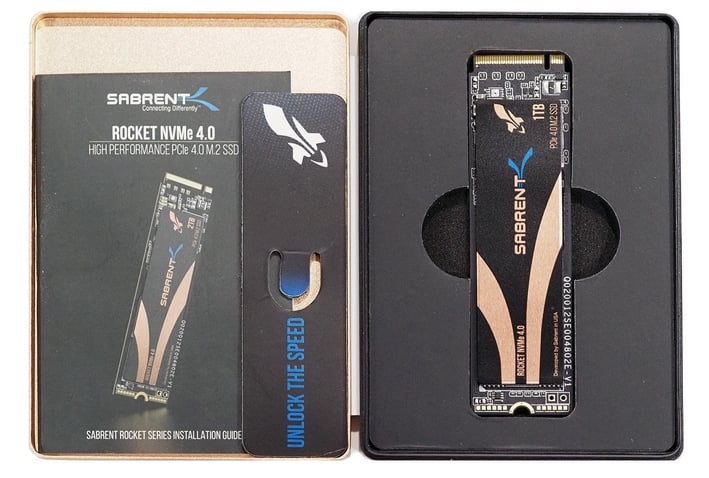 We see a lot of what we'd expect out of a high end, premium-priced solid state drive listed in the Rocket NVMe 4.0's specs. Four lanes of PCI Express 4.0 connectivity is about as good as it gets for consumer SSDs these days. The drive makes use of Toshiba's 96-layer BiCS TLC NAND, which has always been pretty fast, and a 512 MB DDR4 cache made by SK Hynix to act as a buffer. Sabrent hasn't specified whether the Rocket uses part of the drive as a SLC write cache, but to get write speeds that high for very long, it almost certainly has to. 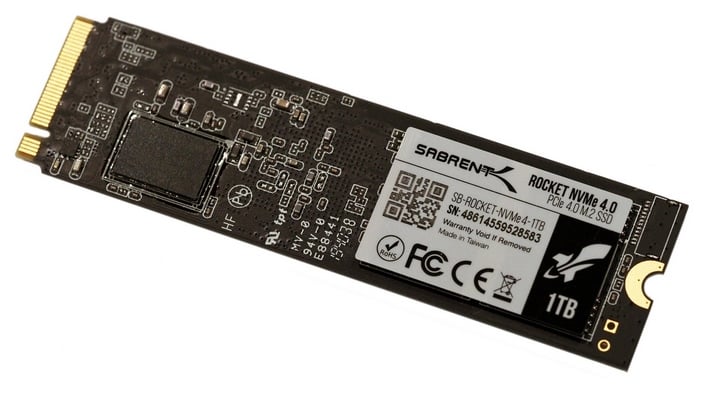 Unfortunately, Sabrent doesn't specify 4K read speeds, but does provide IOPs numbers for the Rocket NVMe 4.0. Interestingly, the reads and writes at a queue depth of 32 are rated much higher on an Intel PCIe 3.0 platform than they are on AMD's X570 chipset. We're testing both later on, so we'll see if there's really any difference in practice.

Last, but certainly not least, is the Rocket NVMe 4.0's durability rating. Sabrent claims it'll last upwards of 1.7 million hours by its mean time between failures spec. Our 1 TB test unit should withstand up to 1.8 petabytes of writes in its lifetime. That figure drops to 850 terabytes for the 500 GB drive and rises to 3.6 petabytes for the 2 TB version. Sabrent backs all three capacities with a five-year warranty, with the caveat that the drive needs to be registered to get coverage. That's a small inconvenience, but the duration of the warranty—which matches manufacturers with bigger names, like Samsung—makes up for it.

Normally, we test all of our SSDs in a Z390 motherboard with a Core i9-9900K with a separate, dedicated boot drive. That's still true for now, but this time out we also tested with one of AMD's Zen 2 Ryzen 9-3950 CPUs in a separate X570 motherboard, so we could also see how the drive performs with all of that PCI Express 4.0 bandwidth at its golden fingertips. As always, our testbed's motherboard was updated with the latest BIOS available at the time of publication and AHCI mode was enabled for the host drive. The SSDs were secure erased prior to testing (when applicable), and left blank without partitions for some tests, while others required them to be partitioned and formatted, as is the case with the ATTO, PCMark, and CrystalDiskMark tests. Windows firewall, automatic updates, and screen savers were all disabled before testing and Windows 10 Quiet Hours / Focus Assist was enabled.

In all test runs, we rebooted the system, ensured all temp and prefetch data was purged, waited several minutes for drive activity to settle, and for the system to reach an idle state before invoking a test. All of the drives featured here were tested with their own NVMe drivers installed where possible / available, but the default Windows 10 NVMe driver was used when a proprietary driver was unavailable. All of the drives here have also been updated to their latest firmware and where applicable.

Now that all of the product specs and other formalities are on the table, it's time to plug this drive in and see how it performs...

Although IOMeter is a well-respected industry standard drive benchmark, we're not totally comfortable with it for consumer testing SSDs. Though our results with IOMeter scale, it is debatable whether or not certain access patterns, as they are presented to and measured on an SSD, actually provide a valid example of real-world performance. The access patterns we tested may not reflect your particular workload, for example. That said, we do think IOMeter is a reliable gauge for relative available throughput with a given storage solution. In addition, there are certain higher-end workloads you can place on a drive with IOMeter, that you can't with most other storage benchmark tools available currently.

In the following tables, we're showing two sets of access patterns; a custom Workstation pattern, with an 8K transfer size, consisting of 80% reads (20% writes) and 80% random (20% sequential) access and a 4K access pattern with a 4K transfer size, comprised of 67% reads (33% writes) and 100% random access. Queue depths from 1 to 32 were tested, though keep in mind, most consumer workloads usually reside at low queue depths. 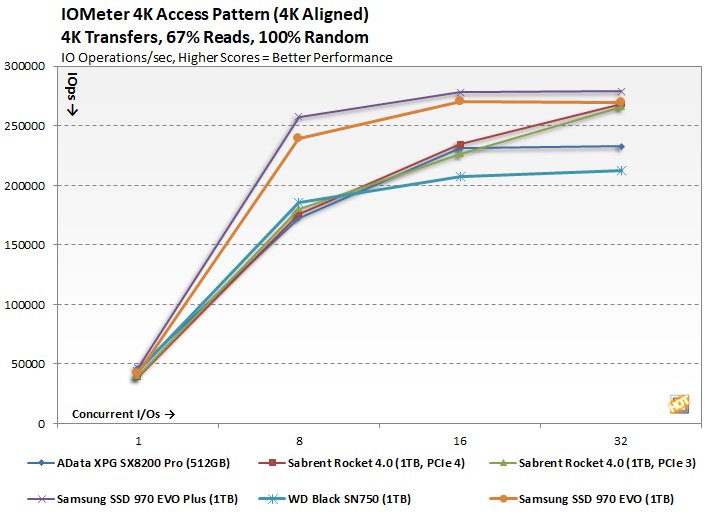 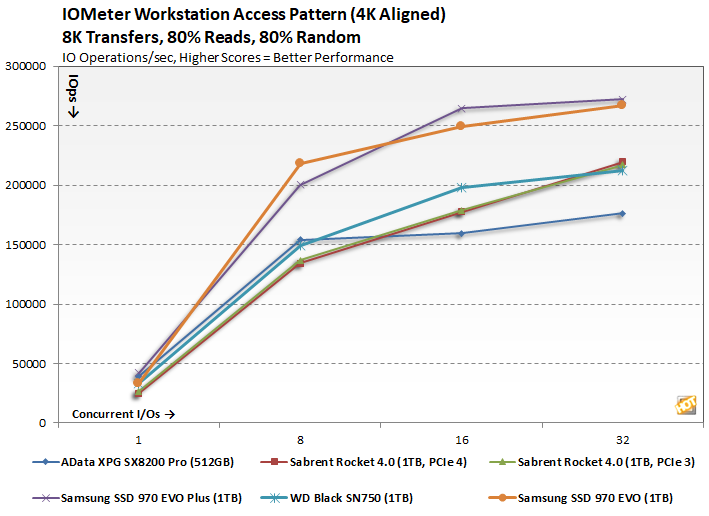 In IOMeter, the Sabrent drive doesn't perform like a rocket. At a low queue depth, all of the drives in our test bunch up with pretty low IO per second rates somewhere below 50,000. Over the course of the run, all of the drives scale up to perform better, but the Sabrent drive can never quite do better than third place on our tests. PCIe 4.0's transactions per second always just barely trail PCIe 3.0, but there are so many variables when you switch platforms like we've been forced to, it's hard to say if it's the added bandwidth or the extra processing horsepower of our Ryzen CPU that makes up the difference. 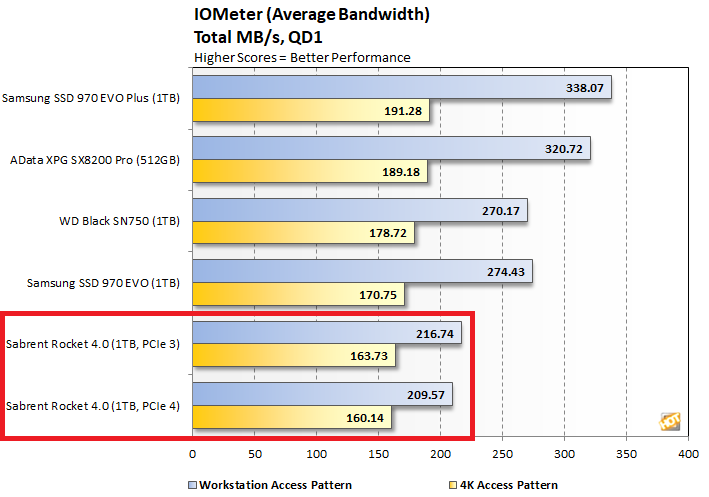 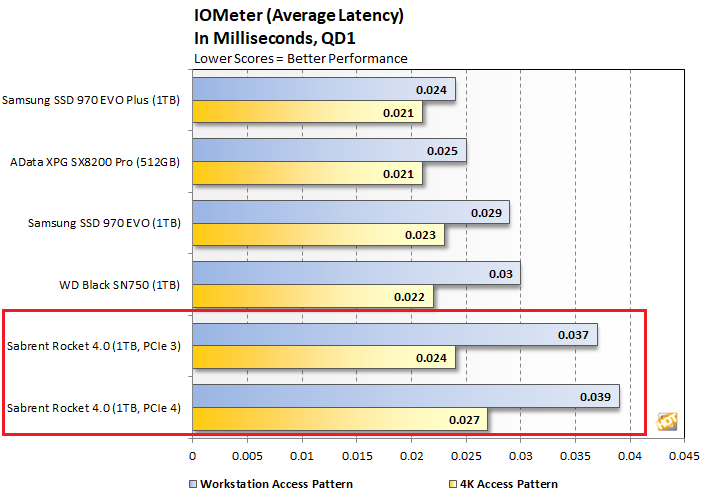 What's unfortunate here is that in every single test, the Rocket NVMe 4.0 finishes behind the rest of the pack. Not only does the switch from PCI Express 3.0 to 4.0 not appreciably help the drive, it actually performs slightly worse. The current state of PCIe 4.0 is that it's only supported on one platform, when all of our other drives were tested on a different one. Throughout our tests, the PCIe 3 results are apples-to-apples comparisons, but it's hard to draw any conclusions about the drive when you have to switch platforms to get PCIe 4.0 performance figures.

When it comes to the bandwidth and latency tests in particular, the drive missed out by nearly around 30% of the next-fastest drive. In the latency tests, the average latency difference is only 0.007 milliseconds off the WD Black SN750, but over the course of hundreds of thousands or millions of transactions, those few thousandths of a millisecond add up into seconds and minutes of added latency. Not off to a great start, but there are plenty of other workloads to test out. 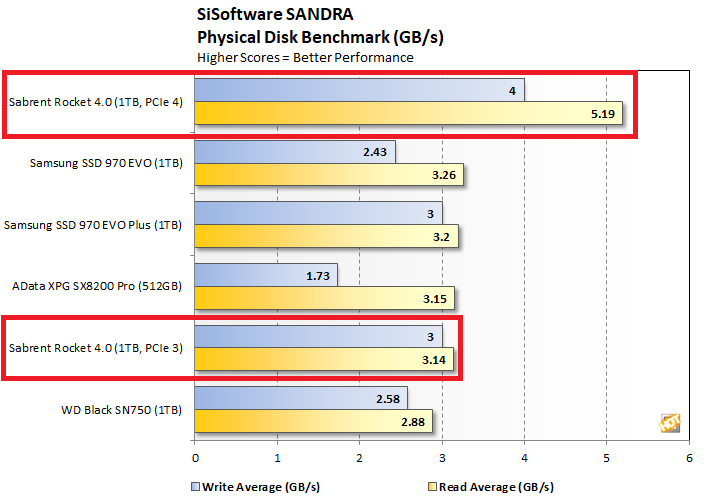 Sandra's tests are extremely sequential in nature, so it makes perfect sense to see the Rocket NVMe 4.0 kind of peak out with the rest of the drives on our test when constrained by PCI Express 3 in that test bed. On the other hand, transfer rates on PCI Express 4.0 can best be summed up as "wowza." It seems the Rocket actually exceeded its theoretical peak sequential read transfer rate, while simultaneously recording a write speed of 4 GB/s. We can sit here and marvel the transfer rates, or we can move on to the next test. Let's move on...
NEXT PAGE