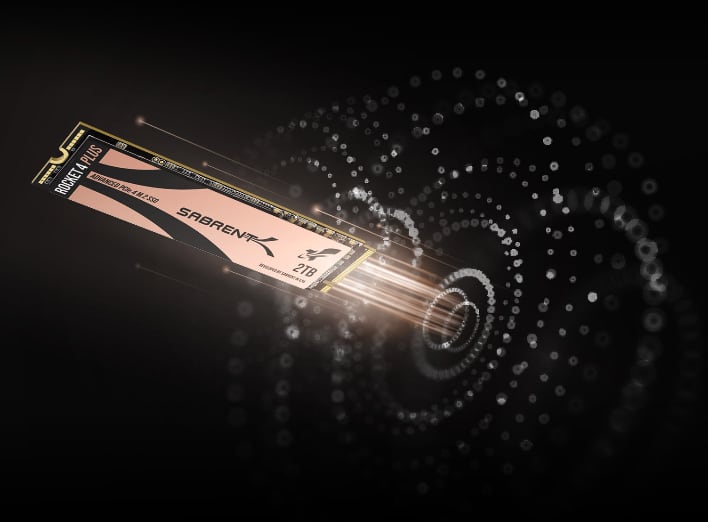 Over the weekend, we were made privy to official specifications for the Samsung 980 Pro PCIe 4.0 SSD, which should be arriving relatively soon on the consumer market. The 980 Pro offers some pretty spectacular performance stats, with maximum sequential reads and writes of 7,000MB/sec and 5,000MB/sec respectively. However, Sabrent is looking to crash Samsung’s brief “hurrah” with the Rocket 4 Plus.

Sabrent’s first PCIe 4.0 SSD, the Rocket, used a Phison E16 controller and provided sequential reads and writes of up to 5,000MB/sec and 4,400MB/sec respectively. However, the new Rocket 4 Plus is off the charts with sequential reads of 7,000MB/sec (matching that of the 980 Pro), and sequential writes that come in at a blistering 6,850MB/sec.

Sabrent is able to pull off this feat thanks to the use of the next-generation Phison E18 controller coupled with TLC NAND. In order to keep the Rocket 4 Plus from overheating when maxing out its performance potential, Sabrent offers a pretty beefy cooling solution with a stacked aluminum tray, aluminum heatsink, copper heat coils and a top heat spreader.

According to the product page for the Rocket 4 Plus, it will be offered in 500GB, 1TB, and 2TB capacities, while the 980 Pro tops out at just 1TB.

At this time, pricing hasn’t been announced for the Rocket 4 Plus family of PCIe 4.0 SSDs, but we can look to the current Rocket family for guidance. The 1TB Rocket is priced at $199.98 at Amazon, while the 2TB Rocket rings in at $399.99.