We used the RedMagic 6R on T-Mobile’s sub-6GHz 5G network and AT&T’s 4G LTE network in San Francisco, Seattle, and Portland, OR, and we didn’t run into any problems with reception, call quality, or data speeds. Then again, this phone only supports 5G on band n41 (2.5GHz), which means it only works on 5G in some of T-Mobile markets. As such, you’ll be stuck on 4G LTE if you’re an AT&T or Verizon customer. 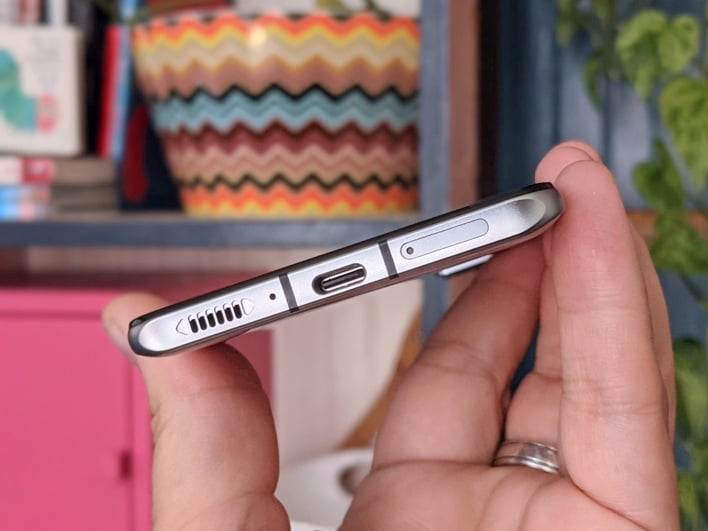 Audio isn’t one of the RedMagic 6R’s strengths. It lacks stereo speakers and a headphone jack -- two features that matter to gamers -- and while the mono speaker is loud, it sounds a bit thin, and is easy to block when holding the handset horizontally and using the capacitive trigger buttons. On the plus side, it supports wired analog or digital audio devices over USB Type-C, plus LDAC and aptX HD for high-quality wireless audio over Bluetooth.

At $499, the RedMagic 6R is currently the most affordable Snapdragon 888-equipped phone available in the US, and one of the cheapest in the world (alongside the $440 Realme GT 5G) which sports that processor. While Qualcomm’s flagship SoC is a powerhouse, it also requires adequate cooling when under heavy sustained workloads, so proper thermal management is critical. Building a Snapdragon 888-equipped handset is one thing, but keeping it cool over the long-haul is another matter.

We’re happy to report that despite its low cost and lack of a built-in fan, the RedMagic 6R handles the heat like a champ. As you can see in our benchmarks below, RedMagic’s gaming heritage pays off. This phone not only feels delightfully quick during everyday use, but actually delivers outstanding sustained performance. It ran everything without skipping a beat -- from our usual productivity apps to demanding 144Hz games like Dead Trigger 2 and Real Racing 3.

Still, the RedMagic 6R can get fairly hot to the touch, almost unbearably so at certain points. It reached temperatures of 140ºF (60ºC) during 3DMark’s Wild Life stress test. To help mitigate this, there’s a Charge Separation option in the Game Space settings, which trickle-charges the battery when playing games while plugged in, thus minimizing heat generation. Obviously, this isn’t going to be an issue most of the time, but it’s something worth mentioning. 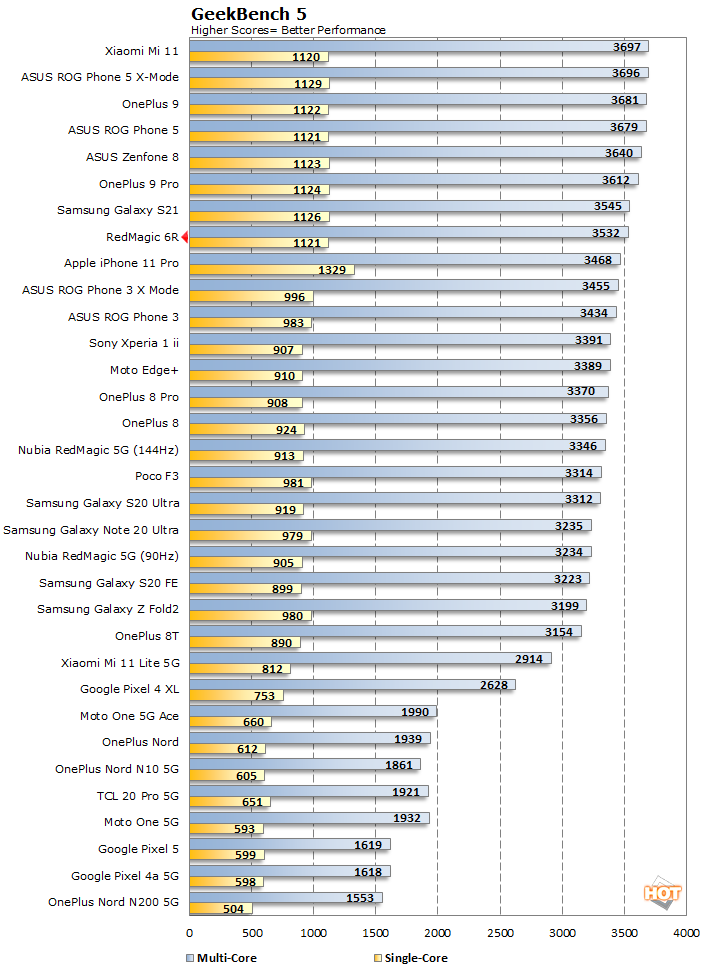 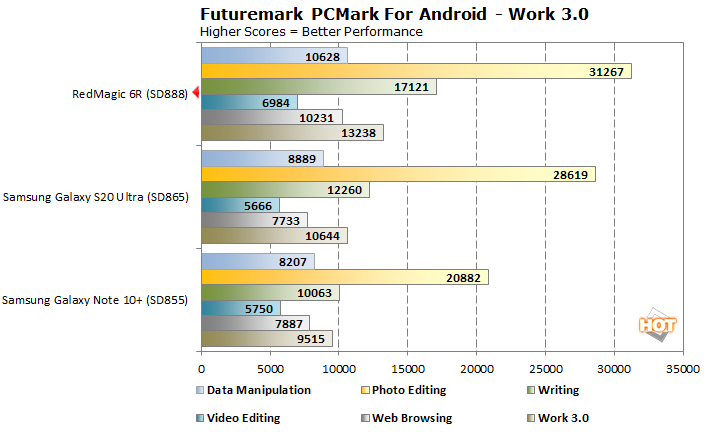 Now that PCMark Work 2.0 is deprecated, we're switching to PCMark Work 3.0. Here the RedMagic 6R beats previous generation flagships, as expected. We're in the process or running this benchmark on other devices, so stay tuned for a broader set of scores in future reviews.
AnTuTu’s latest benchmark returns a number of metrics ranked with somewhat nebulous scores, rather than frame rates or time to complete. Here we're running the latest version of AnTuTu across multiple Android devices. AnTuTu returns four top level performance results which are all included here: CPU, RAM, 3D, UX (or User Experience), along with a total score... 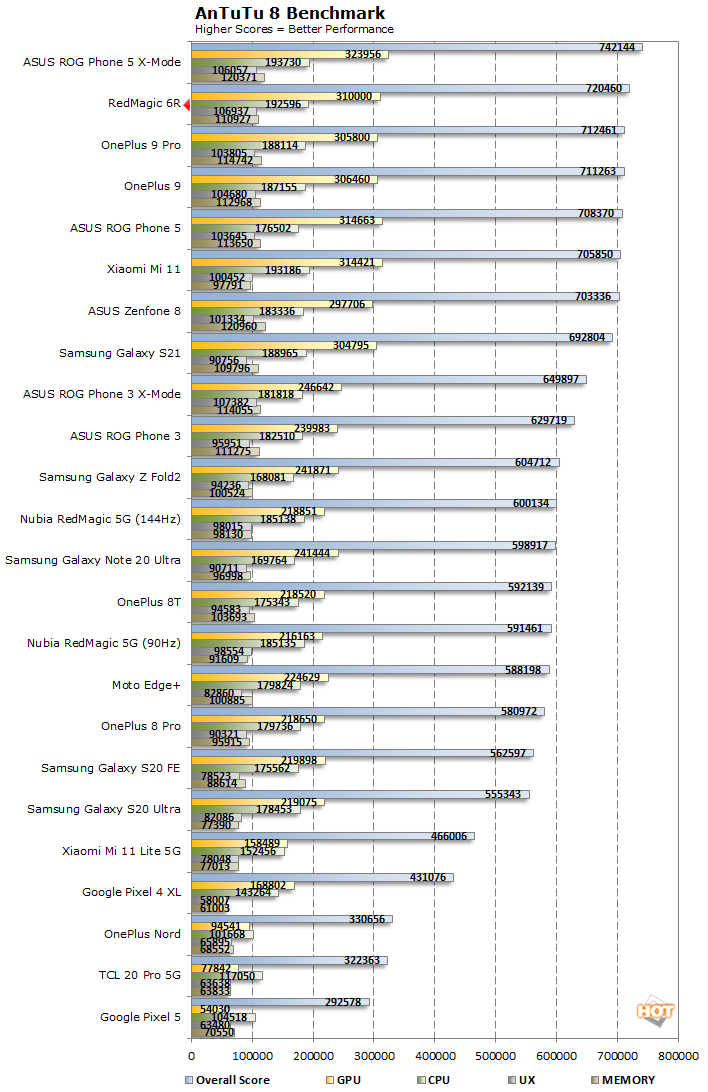 According to AnTuTu, the RedMagic 6R offers a significantly more substantial increase in performance vs. previous generation Android handsets, beating all other Snapdragon 888-equipped phones other than the ROG Phone 5. 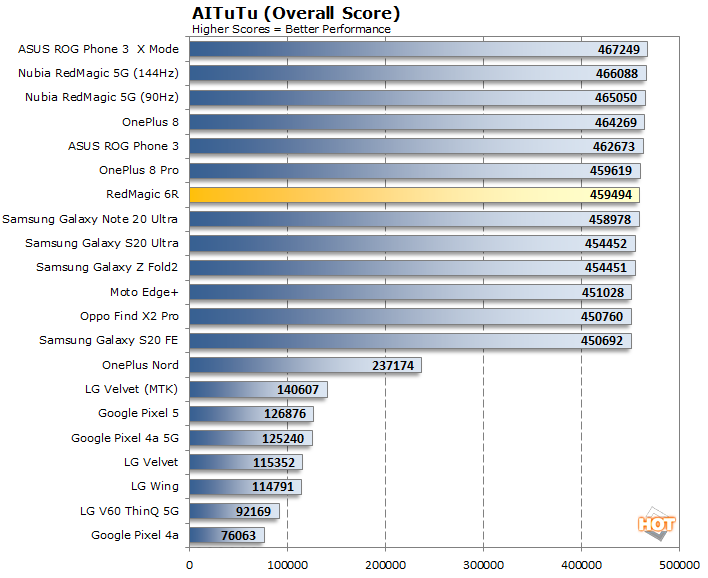 We also ran AITuTu to get gauge artificial intelligence and machine learning performance and found that the RedMagic 6R performed right on-par with with other Snapdragon equipped flagships. 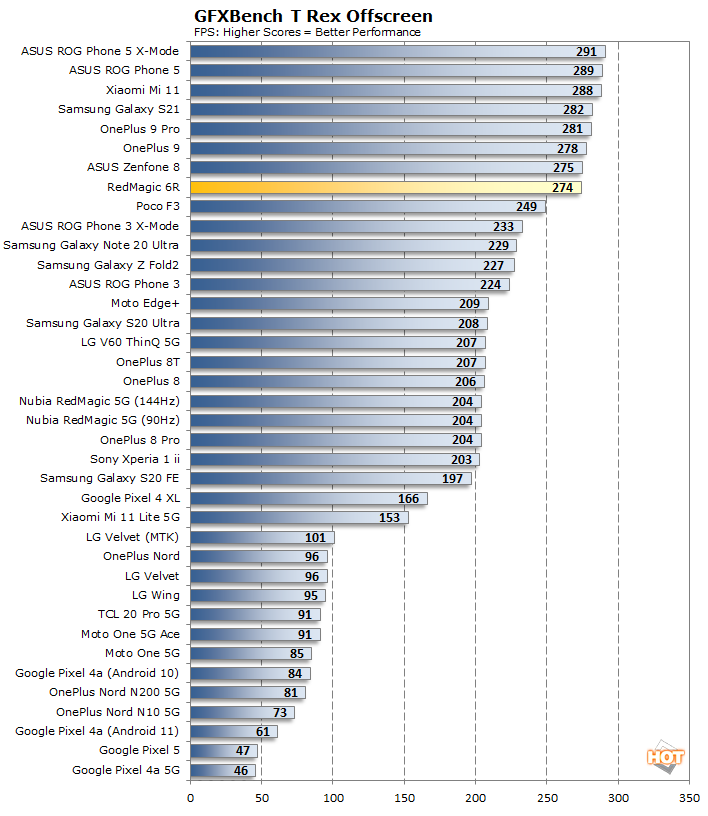 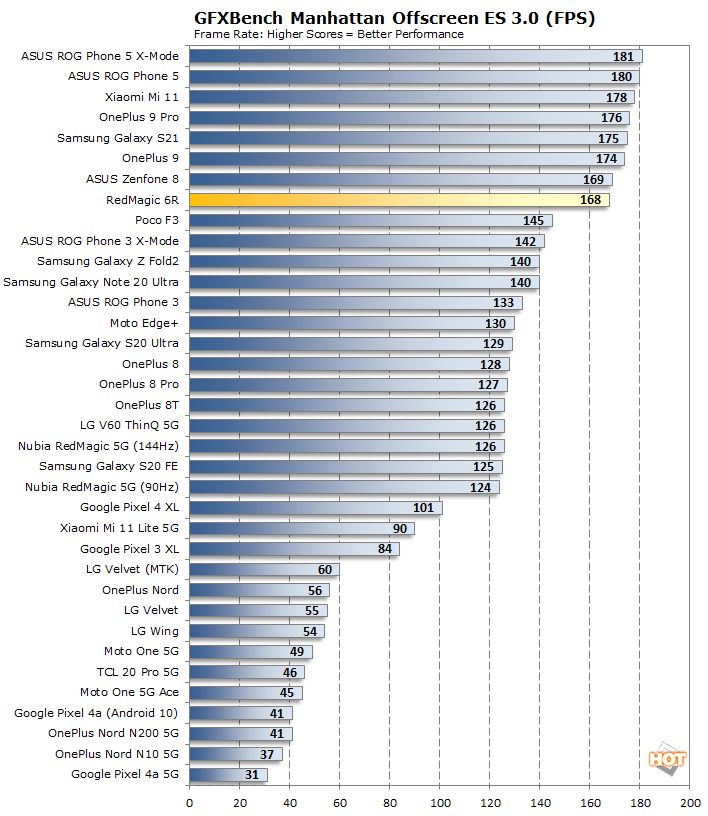 Now we're seeing the kind of performance improvement we expected. The RedMagic 6R clearly beats Snapdragon 865-powered devices, but only lands at the bottom of the Snapdragon 888 pack. 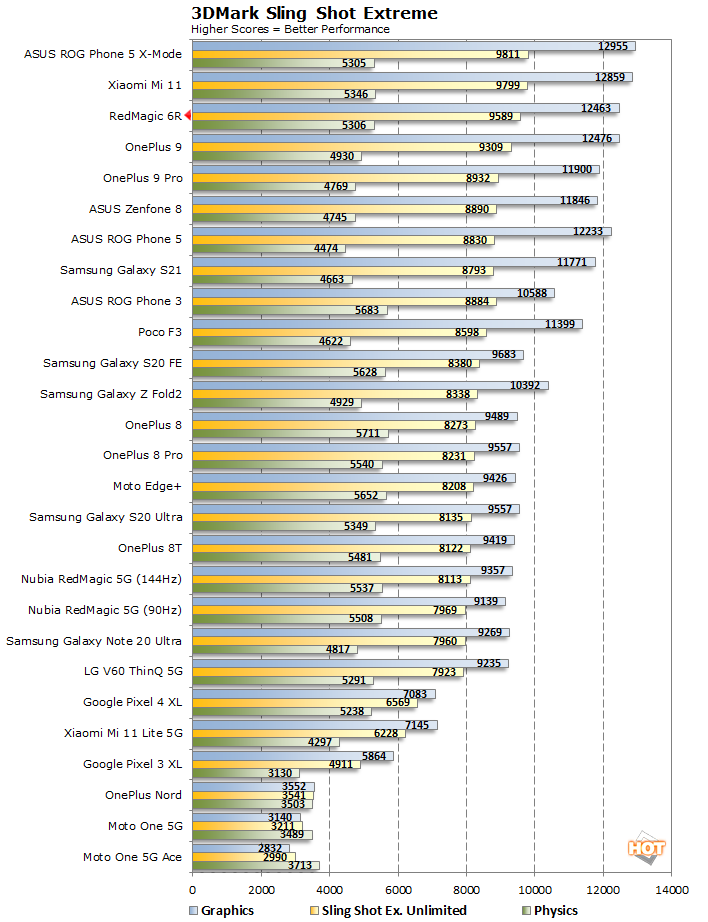 Again here we see an improvement to the graphics score over Snapdragon 865-equipped flagships. The RedMagic 6R performs extremely well in this test, coming close to matching the ROG Phone 5 in X-Mode.


3DMark Wild Life is the latest cross-platform test from UL. UL explains that WildLife is primarily tasked with measuring GPU performance across platforms, and two distinct tests are available. The standard WildLife test is designed to give feedback on how a game performs over a short period of time. With mobile games, people typically play in brief spurts when they find some free time; be it on the bus, on the subway, or a quick battle royale session on your lunch break. The 3DMark WildLife Stress Test, on the other hand, shows how a device performs over a longer stretch of time, and takes note of performance degradation that can crop up due to increased heat levels and throttling (which we'll get to a bit later). 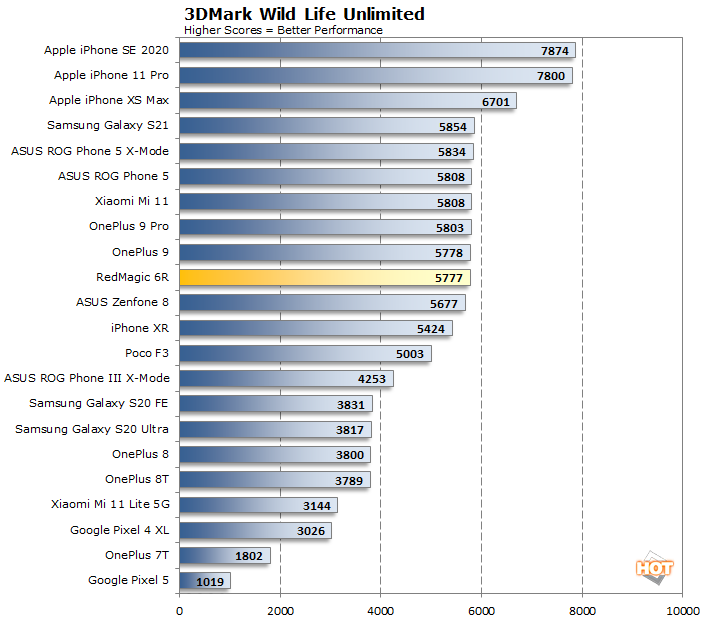 3DMark Wild Life is a significantly more taxing graphics benchmark that employs cutting-edge mobile game engine technologies to deliver impressive visuals -- as you can see in the screen shot above. Here the Snapdragon 888-powered RedMagic 6R delivers a massive improvement in performance versus some of the fastest Snapdragon 865-equipped devices (Samsung Galaxy S20 Ultra and S20 FE). Still, it only lands towards the bottom of the Snapdragon 888 group.

The good news is that RedMagic 6R doesn't exhibit the excessive throttling we experienced with the Galaxy S21 an OnePlus 9-series, managing a stability score of 91.3%, and beating the Xiaomi Mi 11. As such, it's an ideal smartphone for hard-core gamers.

You’ll also find the usual collection of sensors onboard (accelerometer, compass, gyroscope, ambient light, and proximity), plus an optical in-display fingerprint sensor that’s fast and reliable. Face unlock is also on the menu, and works as advertised. Haptics are a major letdown, though. The RedMagic 6R’s vibration motor feels tremendously cheap, unlike the RedMagic 6’s superb (and flagship-worthy) linear motor. 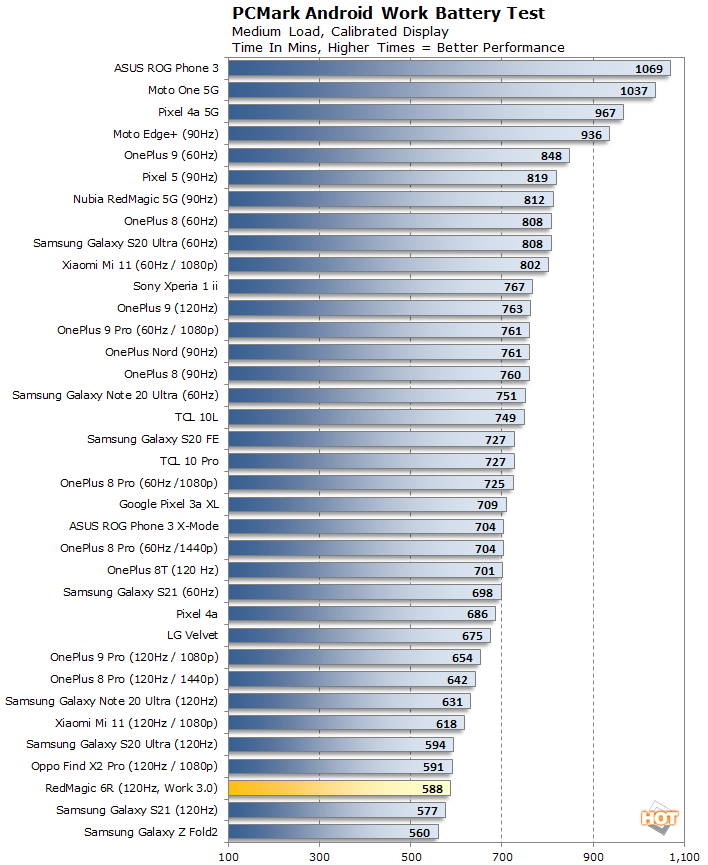 Battery life isn’t terrible, but isn’t stellar either. The RedMagic 6R only features a 4200mAh cell, and if that seems low for a Snapdragon 888-equipped phone with gaming aspirations, that’s because it is. Our PCMark battery test lasted 9 hours and 38 minutes at 120Hz, which isn’t going to break any records. That being said, a full charge should last an entire day under normal conditions for most folks.

When it’s time for a refill, the RedMagic 6R supports 30W fast charging (compatible with both Power Delivery 3.0 and Quick Charge 4) and comes with a 30W fast charger in the box. There’s no wireless charging here, which isn’t really surprising at this price point.