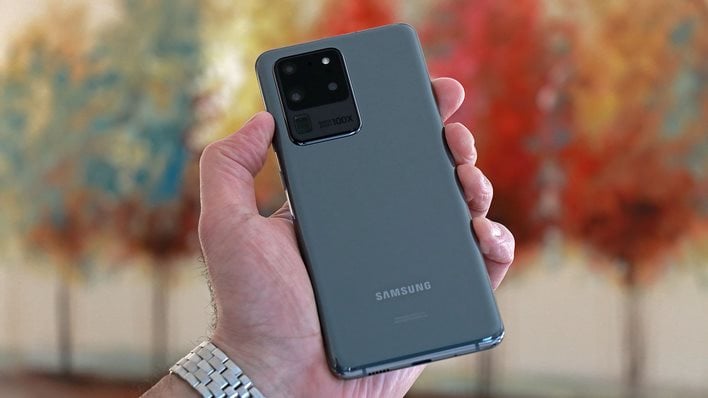 Samsung's Galaxy S line is the company's premier family of flagship Android phones. Over the years it has been underpinned by a recurring theme of bigger, faster, and prettier, with a ever-growing list of features. This year's Galaxy S20 family is no exception, starting out at a bold 6.2-inch format for the smallest Galaxy S20 5G device, 6.7-inches for the Galaxy S20+ 5G, and topping-out at the bodacious 6.9-inch Galaxy S20 Ultra 5G. We have the Galaxy S20 Ultra on tap for review here and it's Samsung's full boat, no compromises offering in the Galaxy S20 line-up.

As its name suggests, the Galaxy S20 Ultra 5G is a 5G-ready phone powered by Qualcomm's most powerful Snapdragon 865 Mobile Platform, along with Qualcomm's Snapdragon X55 5G modem chipset that's compatible with both Sub-6 and mmWave (Millimeter Wave) 5G connectivity. This means the device will connect to any available 5G network coverage, from Verizon and AT&T to T-Mobile and Sprint. Our device was sent with a T-Mobile SIM in it, so we'll be working with T-Mo's Sub-6 enabled 5G network, which generally speaking means a broader 5G coverage area versus mmWave, but at slower speeds. It's still true 5G, though. More on this later.
Breaking down the basics, color options for the Galaxy S20 family are not common across all of the devices, so take note. Our Galaxy S20 Ultra is a Cosmic Gray variant, though in this model you also can op for Cosmic Black. For the Galaxy S20+ the color options are Cosmic Gray, Cosmic Black or Cloud Blue. And finally standard Galaxy S20 devices can be had in Cosmic Gray, Cloud Blue or Cloud Pink (represented in the trio shot above).

The specs rundown for the Galaxy S20 Ultra 5G reads like a check list of the latest and greatest features for next generation Android phones, but beyond its Snapdragon 865 5G mobile processing platform there are a few stand-outs -- its display, its massive 5000 mAh battery, and completely amped-up camera array to name a few. That large battery is the result of a having a roomier shell to build it into, but also out of necessity as lighting all of the pixels of its nearly 7-inch display, and at higher refresh rates (up to 120Hz) upon request, requires more power to spare to be sure.

Regardless, let's have Marco take you on a quick guided tour of the new Galaxy S20 family and then we'll dig into our Ultra 5G in more detail and take it around the test track...

The first thought that may come to mind is that, if you're the type that likes a more compact handset, the Galaxy S20 series might not be your cup of tea, but that may be somewhat misguided. Samsung manages to squeeze a very generous amount of screen real estate into its Infinite-O display technology, with only the thinnest of bezels and a bullet hole punch-out for the front-facing camera. 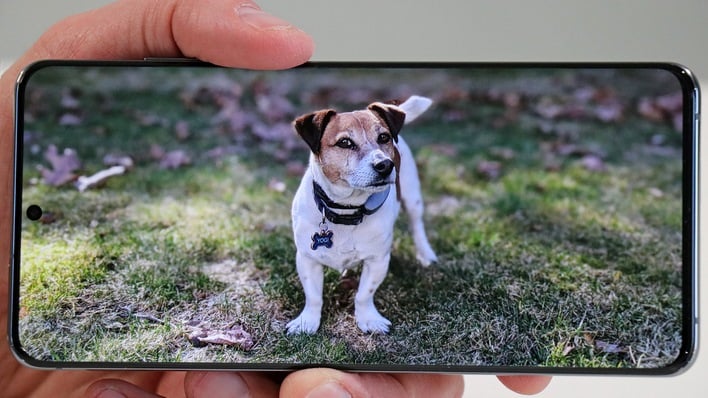 As you can see, Yogi mostly approves of this small disruption for the Galaxy S20 Ultra's 40MP selfie cam and indeed it's far less obtrusive in most use cases than traditional notch implementations. However, what's really standout about the Galaxy S20 Ultra's display (other than its expansive size) would be Samsung's award-winning Dynamic OLED display technology. It's simply the best in the business with great saturation and OLED pop, along with HDR10+ certification and serious brightness for excellent viewability in sunny daylight conditions. You'll have to go easy on the brightness slider of course, for optimal battery life, but when you need, it's there and this display's color fidelity is exceptional. Finally, for less eye strain and more fluid graphics and gaming animation, there's now a 120Hz refresh option for the Galaxy S20 Ultra's display (default is 60Hz), which also at the expense of some battery life. However, again, it's an option you can easily toggle and with a 5000 mAh battery on board the S20 Ultra, you may not care. More on this shortly as well.

When it comes to industrial design, Samsung's chops are second to none. If you're looking for an ultra-premium experience, Samsung's Galaxy S20 family delivers best-in-class hardware throughout. Similar to the Galaxy S10 before it, but perhaps more subtle, the Galaxy S20 Ultra has slight curved front and rear side edges that allow it to feel comfortable in the hand when reaching across for single-handed navigation. That said, make no mistake, this is a large format phone. If you like a big, bright display, the S20 Ultra is all you. If you want something more manageable quickly out of the pocket with one hand, think about a Galaxy S20 or S20+ instead. Regardless, when you compare the Galaxy S20 Ultra to the heavy chin inefficiencies of say the Google Pixel 4XL, you get an appreciation for how much screen real estate Samsung packs into available pocket space. 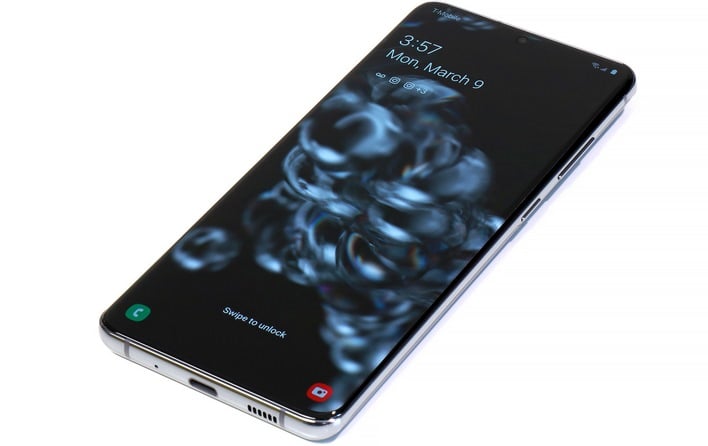 Strapped with polished steel edges and Gorilla Glass 6 on its front and back, the Galaxy S20 Ultra may be one of the most robust in Samsung's family of Galaxy devices to date. Frankly, we've found previous generation Galaxy S phones (think vintage 9 and earlier) to be less than resistant to micro-scratches, especially on the backside of the devices. However, so far, under normal use for the past 2+ weeks, the Galaxy S20 Ultra looks as fresh as it did when we freed it from its box. Samsung also includes a pre-applied clear plastic oleophobic screen protector on the front of the device now, which is a nice touch and one less thing for prospective customers to worry about.

Return Of The Ultrasonic Fingerprint Sensor

Another nice feature of the Galaxy S20 Ultra 5G's display is its integrated Qualcomm 3D Sonic Fingerprint sensor that's built into the glass. This sensor works better than ever with good on-device security and anti-spoofing technology built-in, and faster recognition time than previous versions. And it works better now if your fingers happen to be wet as well. We do wish the sensor array was a little larger, so finger placement didn't have to be quite as precise. Alas this is the same senors as previous generation Galaxy S10 and Note 10 series devices, but with now more mature firmware. Hopefully Samsung will move to Qualcomm's larger 3D Sonic Max sensors in future generation devices.

Beyond that, in terms of buttons and IO, you get the standard Samsung setup of a volume rocker and screenlock/Bixby button on the right side edge, with a combo SIM tray and microSD card slot on the top. On bottom you'll find USB-C connectivity and a downward-firing speaker port, but no 3.5mm headphone jack unfortunately, so it's dongle or wireless whether you'll like it (or not). You also get dual mics (top and bottom) as well as another earpiece speaker up top for stereo sound that actually puts out excellent volume, but as always, is a little thin on low-end bass response. In terms of volume, we'd say the Galaxy S20 Ultra is more than capable of kicking out the jams, but you'll want to enable its Dolby Atmos setting and maybe trim back the highs a touch, while pushing up the lows, to achieve a richer sound. All told, acoustically, we have no complaints here, but we still miss the analog headphone jack to keep our options open. 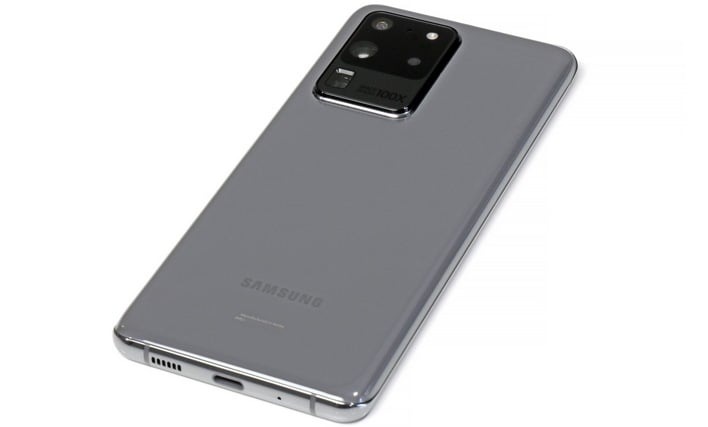 These days, the back-sides of smartphones are getting much more complex with ever-more sophisticated camera systems. Qualcomm's Snapdragon 865 affords higher camera resolution processing up to 108 Megapixel resolution and up to 8K video recording, so Samsung took the opportunity to equip its top-end model in the Galaxy S20 line-up with a 108MP ISOCELL Bright HM1 sensor and a 100X periscope, prism of sorts, zoom lens. This configuration allows the phone to achieve a hybrid 10X optical zoom, along with 100X digital zoom for what the company has now branded as Space Zoom. 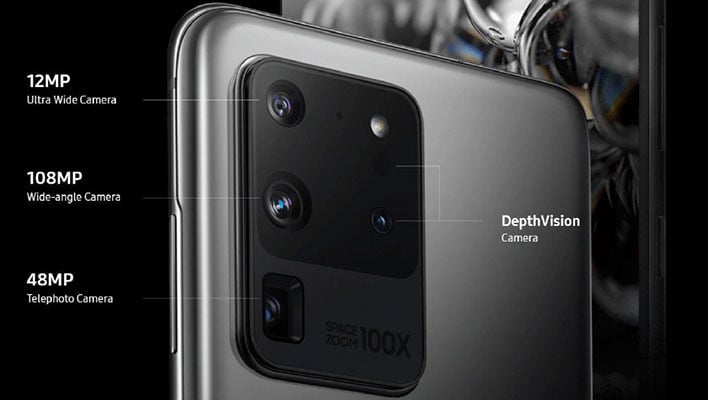 But that's just the primary camera with its f/1.8 aperture 79-degree wide angle lens. Also on board are a 12MP f/2.2 120-degree ultra-wide angle camera, a 48MP f/3.5 telephoto zoom lens, and a ToF sensor (DepthVision) array and LED flash. The result is an unmistakable, large rectangular bump-out on the back that offers a lot of versatility to capture an array of shot compositions and effects. We'll step through many of those in our camera test results shortly as well. 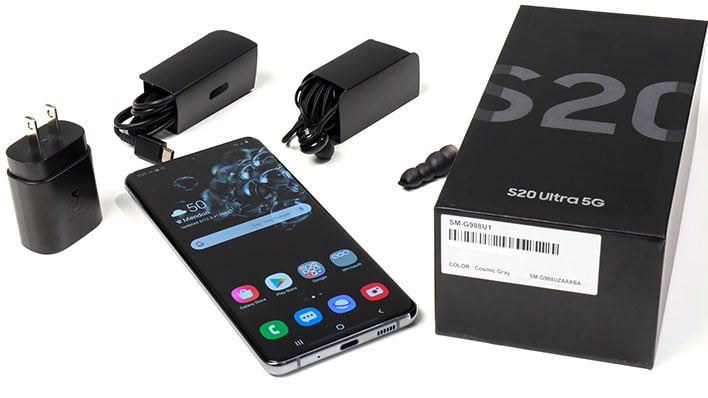 Big, premium phone, big beautiful display, big battery, powerful guts, and expansive camera features -- check. What else do you get? You're looking at it above. Along with the Galaxy S20 Ultra, Samsung drops in a standard 25 Watt Super Fast Charger that does an excellent job of topping off the phone very quickly (more in our battery test results to come). However, the phone also supports optional 45 Watt charging with a compatible charger for ridiculously fast recharges as well. Along with the 25 Watt USB-C charger you Samsung's standard bundle of AKC wired USB-C earbuds and some soft rubber replacement tips, as well as a fairly long but a little thin USB-C cable. We're happy to see those USB-C earbuds in there, though your old wired buds are a no-go without a compatible converter dongle.

So that's the Galaxy S20 Ultra's hardware, let's look at some software and its camera magic in action...