Do you think that your flagship phone with a 120Hz display is hot stuff? Well, guess again. Today, Tencent Games and Red Magic announced the introduction of the Red Magic 6 and Red Magic 6 Pro, which are taking the gaming phone paradigm and shifting it into overdrive with a scintillating 165Hz display.

The 165Hz display leaps over the previous 144Hz high-water mark set last year with gaming phones. In this case, both smartphones use a 6.8-inch FHD+ OLED (2400x1080) display that can adaptively select between 60Hz, 90Hz, 120Hz, and 165Hz refresh rates. At the same time, they support an industry-leading 500Hz touch sampling rate (single finger) or up to 360Hz for multi-touch. Finally, response times ping in at a low 8ms.

As you might expect from a gaming phone launching in 2021, the Red Magic 6 and Red Magic 6 Pro are powered by Qualcomm's new flagship Snapdragon 888 SoC. In the former's case, it's paired with 8GB of LPDDR5 RAM and 128GB of UFS 3.1 storage. The Red Magic 6 Pro, on the other hand, ups the stakes with a base configuration of 12GB of LPDDR5 RAM and 128GB of storage. However, there will be configurations available with up to a staggering 18GB of RAM and 512GB of internal storage.

The smartphones also differ in their power sources. The Red Magic 6 comes with a 5,050 mAh battery that can be topped up with a 66W charging system in just 38 minutes. The Red Magic 6 Pro, on the other hand, has a smaller 4,500 battery that supports lightning-fast 120W charging. That will take the battery from empty to a 100 percent charge in 17 minutes.

Since these phones are aimed at gamers who want uncompromising performance, Red Magic has outfitted them with a built-in centrifugal fan that can spin at up to 20,000 rpm to dissipate heat. You'll also find copper foil lining the battery along with a vapor chamber to wick heat away from the motherboard. Cooling fans aren't usually something that we think of with everyday smartphones, but they're becoming more common, either standard or as an optional accessory in the gaming phone segment. A Dual-core Ice Dock with two fans can be added to keep the phones even cooler and has its own RGB design flourishes. 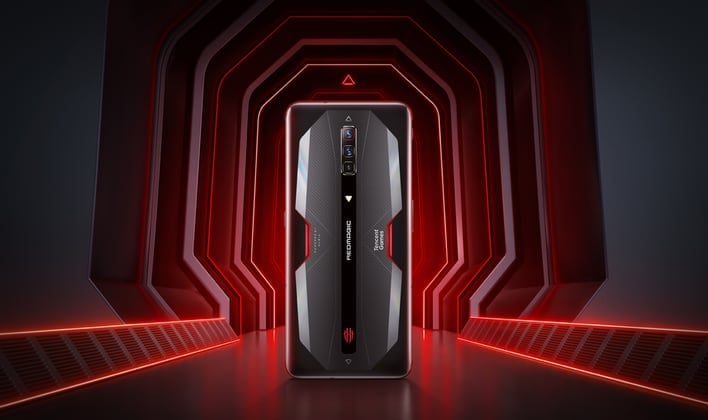 Other niceties included with the Red Magic 6 Series include 400Hz dual shoulder capacitive triggers, an 8MP selfie camera, triple rear cameras (64+8+2MP), a configurable RGB light strip on the back, and yes, a 3.5mm headphone jack.