How We Configured Our Test Systems: We tested the graphics cards featured in this article on an ASUS Prime X299 Deluxe motherboard powered by a Core i9-10980XE 18-core / 36-thread processor and 32GB of HyperX DDR4 RAM clocked at 2,933MHz. The first thing we did when configuring the test system was enter the UEFI and set all values to their "high performance" defaults, then we disabled any integrated peripherals that wouldn't be put to use. The memory's clock was dialed in to its optimal performance settings using its XMP profile and the solid state drive was then formatted and Windows 10 Professional x64 was installed and fully updated. When the Windows installation was complete, we installed all of the drivers, games, applications and benchmark tools necessary to complete our tests.

Superposition is a handy benchmark tool from Unigine, powered by the UNIGINE 2 Engine. It offers an array of modes, targeting gaming workloads as well as VR, with both DirectX and OpenGL code paths. There is an extreme hardware stability test built-in as well. Unigine Superposition uses the developer’s unique SSRTGI (Screen-Space Ray-Traced Global Illumination) dynamic lighting technology, along with high quality textures and models, to produce some stunning visuals. We ran Superposition in two modes using the DirectX code path – 1080p Extreme and VR Future -- to compare the performance of all of the graphics cards featured here. 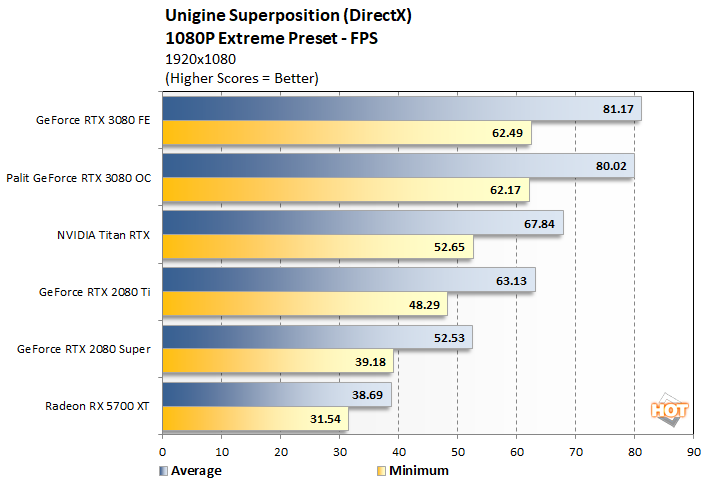 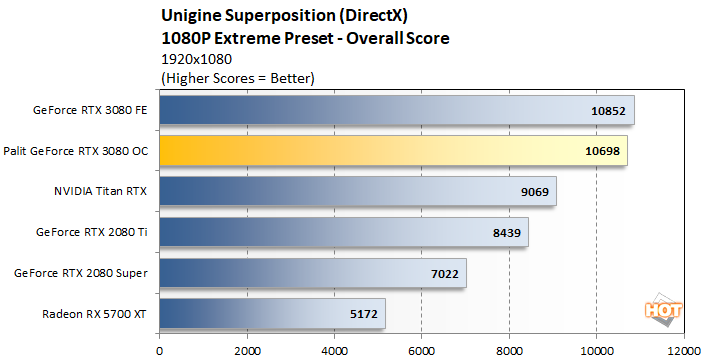 Although it technically has a higher, peak boost clock, the Palit GeForce RTX 3080 GamingPro OC came in just a notch behind the NVIDIA Founder's Edition in Unigine Superposition's 1080P Extreme test. Both RTX 3080's, however, blew past all of the other cards to finish at the top of the charts. 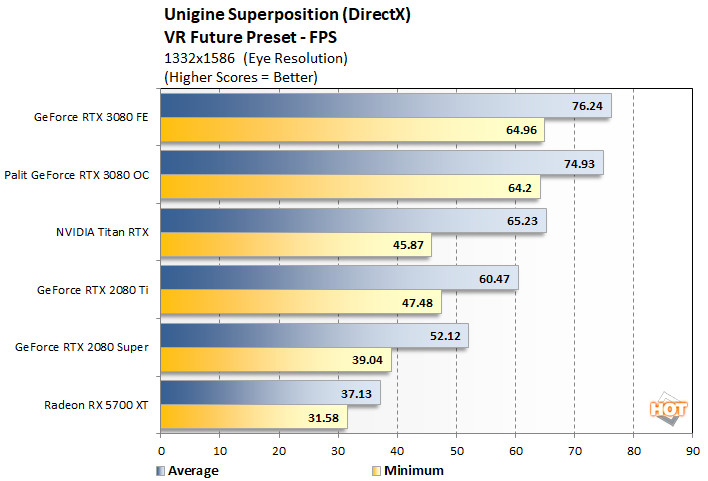 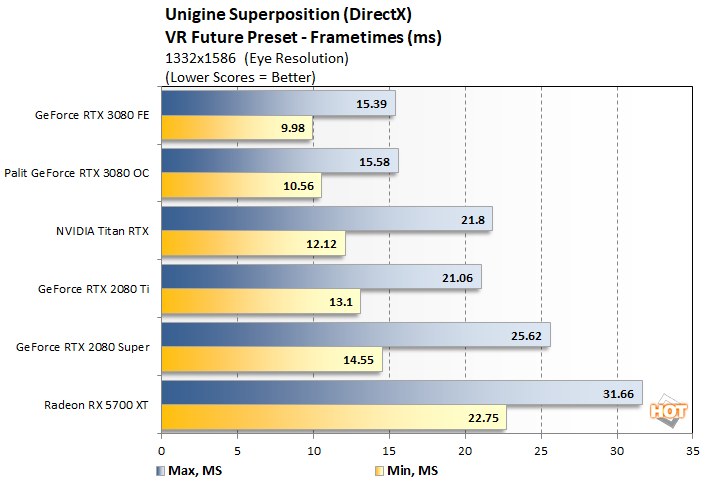 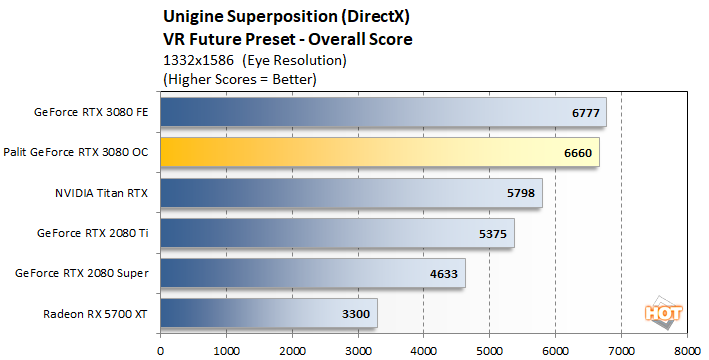 Superposition's VR Future test followed a similar performance trend, with the Palit GeForce RTX 3080 GamingPro OC finishing just a notch behind NVIDIA's Founder's Edition card, but well out in front of everything else we tested. 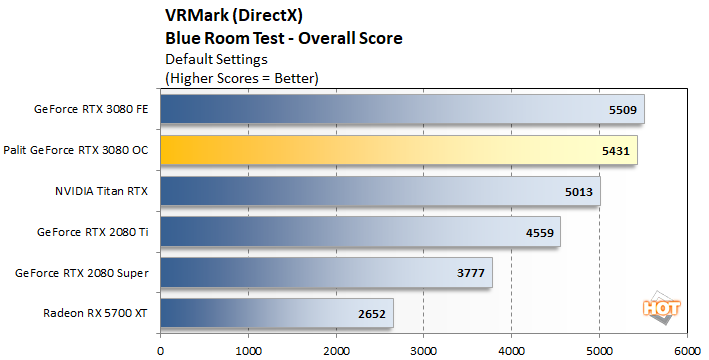 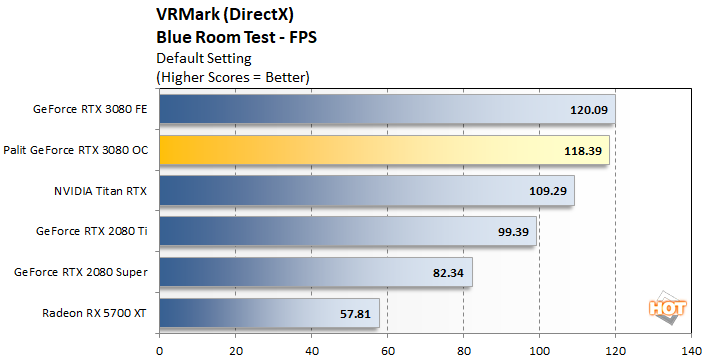 In VR Mark, the Palit GeForce RTX 3080 GamingPro OC once again just missed the mark set by the GeForce RTX 3080 Founder's Edition. The delta separating the cards is tiny though, and would be imperceptible in real-world use. 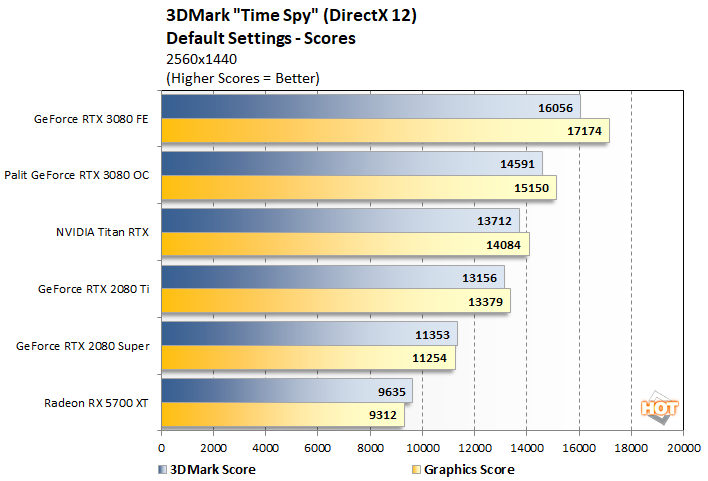 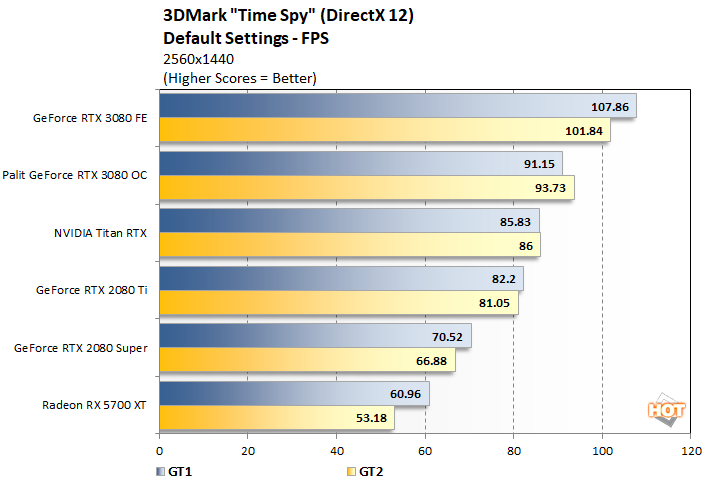 The Palit GeForce RTX 3080 GamingPro OC behaved curiously in the DX12-based 3DMark Tme Spy benchmark. No matter how many times we re-ran this test, the card always finished a few percentage points behind the NVIDIA Founder's Edition. It was still very fast -- faster than an Titan RTX, as you can see -- but the delta here was larger than what we saw in the previous couple of tests. We suspect this particular workload was causing lower then expected sustained clocks than the Founder's Edition card but haven't capture that data to analyze just yet. 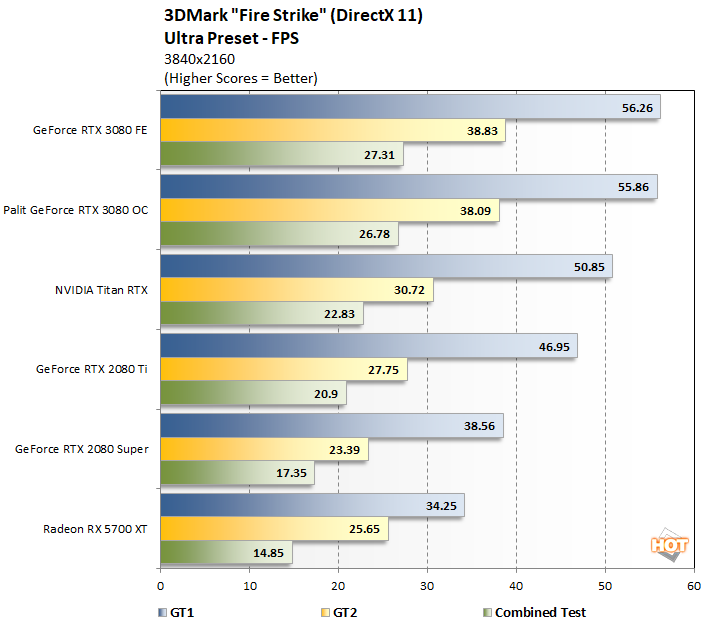 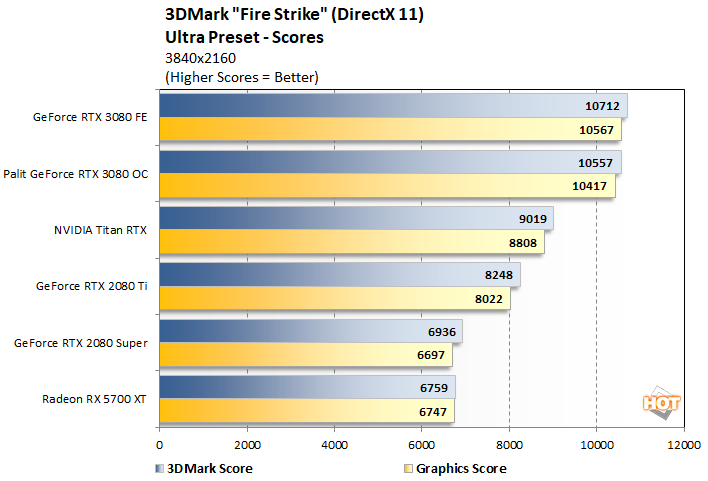 Our results in the DX11-based Fire Strike benchmark once again have the Palit GeForce RTX 3080 GamingPro OC and NVIDIA Founder's Edition card finishing right on top of each other, well ahead of all of the other cards we tested.

The same held true in the Port Royal test. The Palit GeForce RTX 3080 GamingPro OC couldn't quite catch the FE, but it left everything else in its wake.
PREV PAGE NEXT PAGE