We also spent a little time overclocking the Palit GeForce RTX 3080 GamingPro OC to see what kind of additional performance it had left in the tank...

Ampere-based GeForce RTX 30-series cards like the Palit GeForce RTX 3080 GamingPro OC, feature GPU Boost just like previous-gen GeForces. GPU Boost scales frequencies and voltages up and down based on the GPU's workload at the time, within predetermined power and thermal limits. Should a temperature or power limit be reached, GPU Boost will drop down to the previous boost frequency/voltage stepping, in an attempt to bring power and temperatures down gradually and not cause and significant performance swings. That maxumum boost clock can be tweaked and tuned to wring more performance from most GeForces, however. 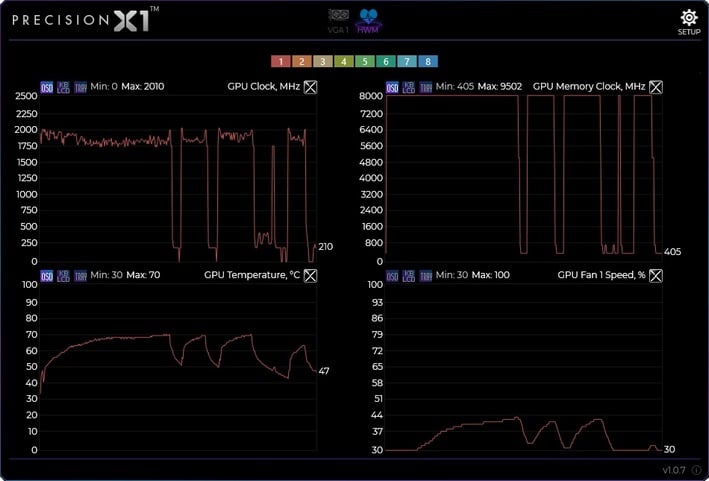 As we've mentioned in some of our previous coverage, NVIDIA has segmented the core and memory power rails and optimized interfaces on RTX 30-series cards to preserve signal integrity and ensure smooth power delivery, which are two things that should help with overclocking. That said, like previous-gen Turing-based cards, the Ampere-based GeForce RTX 30-series is still power limited to prevent damage and ensure longevity -- which will be the effective limit of any overclocking efforts.

With the Palit GeForce RTX 3080 GamingPro OC, however, the power target can be increased by up to 9%, the max temperature target from 83°C to 91°C, and the GPU voltage can be raised by up to .1v as well. 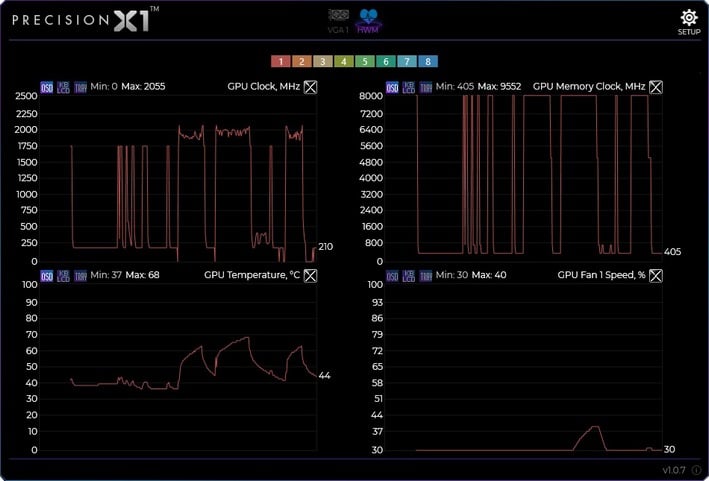 We kept things simple while overclocking the Palit GeForce RTX 3080 GamingPro OC. We used the frequency and voltage offsets, and the power and temperature target sliders available in the latest version of Precision X1, to manually push the card beyond its stock configuration. First, we turned up the temperature and power targets, and voltage, then we bumped up the GPU and memory clock offsets until the test system was no longer stable, showed on-screen artifacts, or performance peaked due to hitting the power limit. 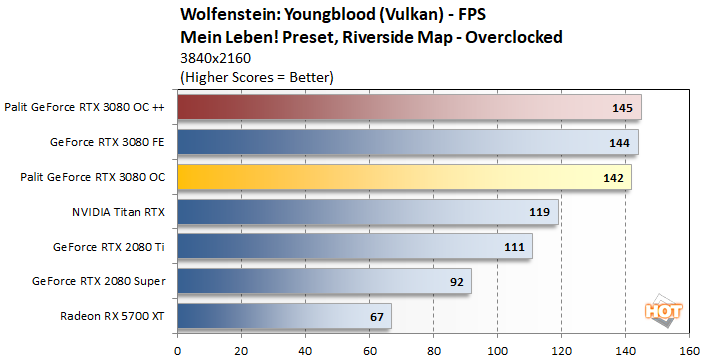 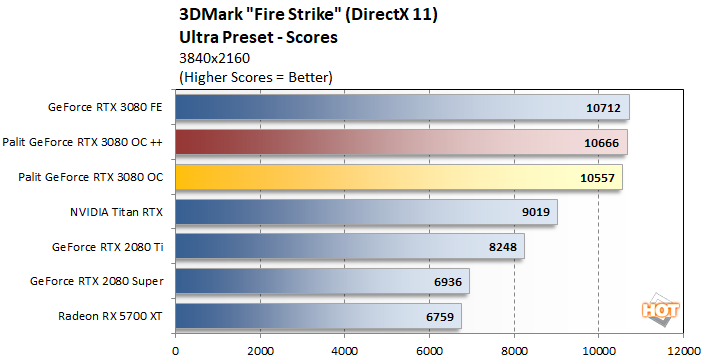 In the end, we were able to take the Palit card's GPU up to almost 2.1GHz (2,055MHz) and memory to an effective data rate of 19.1Gpbs. While overclocked, we saw some clear performance improvements in Wolfenstein and 3DMark, but the increases were modest overall.


Before bringing this article to a close, we'll cover a couple of final data points regarding power consumption and acoustics. Throughout all of our benchmarking and testing, we monitored noise output and tracked how much power the GPU's were consuming using NVIDIA's PCAT device. Our goal was to give you an idea as to how much power each GPU used while idle and also while under a heavy workload. These power numbers were captured over the duration of an entire 3DMark Fire Strike run, including the full demo, and are indicative of the GPU alone -- not the entire system... 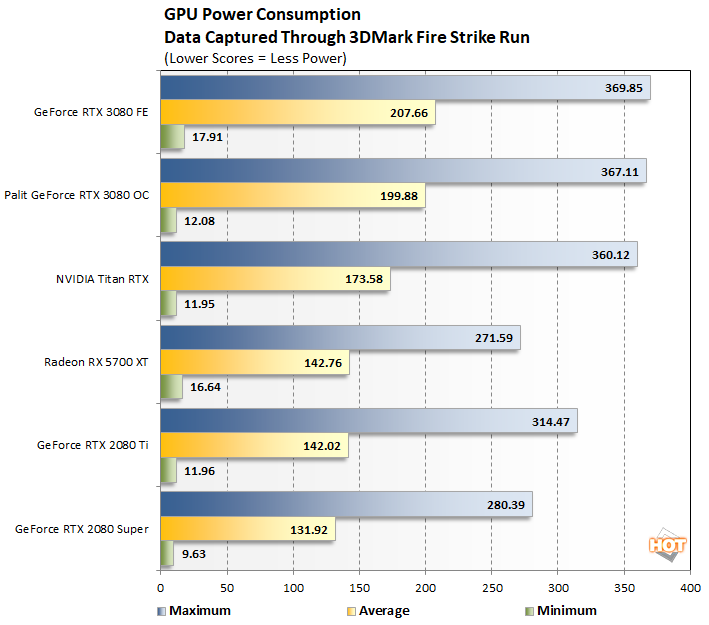 The Palit GeForce RTX 3080 GamingPro OC consumed slightly less power than NVIDIA's Founder's Edition card. Both GeForce RTX 3080s, however, use more power than any of the previous-gen cards. Considering their monumental performance improvements though, we don't think many gamers are going to mind.


The Ampere-based GeForce RTX 3080's absolute power consumption may be higher than its predecessors, but even with its more demanding power requirements, heat and noise will likely be non-issues for most users. 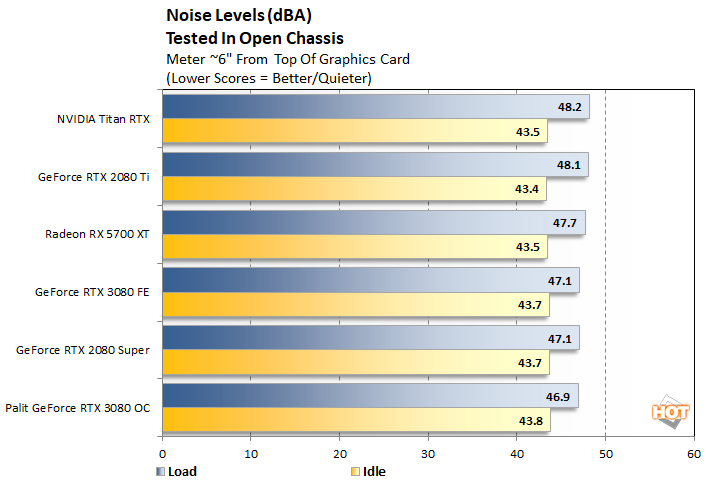 We measured the sound pressure from about 6" away from the top of the GPUs, with the side-panel remove from our chassis. The test system has 3 additional fans -- 1 x 120mm exhaust fan, 1 x 120mm fan on the CPU heatsink, and another 140mm fan in the PSU. Overall, the test system is what we would consider relatively quiet, though its fans do drown out most GPUs, at least until they are placed under a sustained load for an extended period. Anyway, the Palit GeForce RTX 3080 GamingPro OC ended up being the quietest of the bunch. Remember, it generates no noise at idle because its fans spin down completely when the GPU is not under load and operating below 60°C. 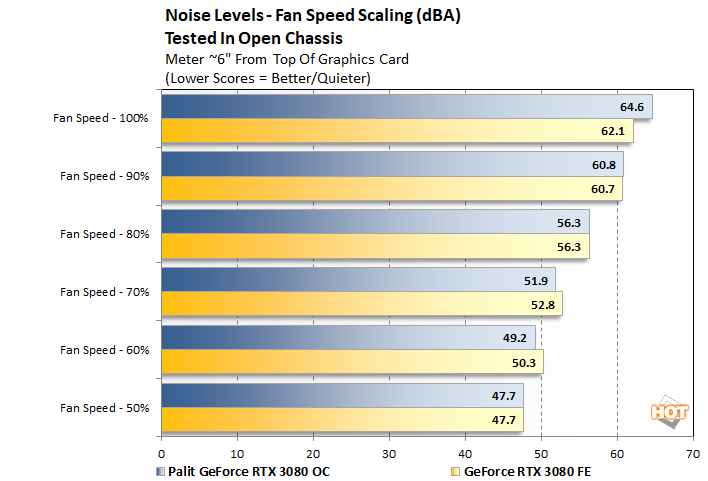 By default, the Palit GeForce RTX 3080 GamingPro OC's cooling fans will spin up to about 40% of their maximum capacity in real-world use when temperatures rise and the card is under load, which was barely audible over our test systems case / CPU fans. We did, however, manually crank up the fan speed on the card to see how loud it could theoretically get if temperatures got out of hand. At maximum speed (for all three fans), our sound meter measured a peak of 64.6dBa, which is louder than the dual-fan NVIDIA Founder's Edition card. We should point out though, that even while overclocked, the Palit GeForce RTX 3080 GamingPro OC's GPU temp never exceeded 70°C and the fan speed maxed at only 40%. If your system is adequately cooled -- temperatures aren't going to be an issue with this card.

The Palit GeForce RTX 3080 GamingPro OC is a different animal than NVIDIA's GeForce RTX 3080 Founder's Edition. The Palit card is bigger, has much more aggressive styling, doesn't feature the new, mini-12-pin power connector, and it has a different frequency / voltage curve. They are obviously cut from the same cloth though, and the cards performed similarly. Technically, the FE card finished out in front more often than not, but we're talking about minor differences and ultimately they both crushed all of the competition. 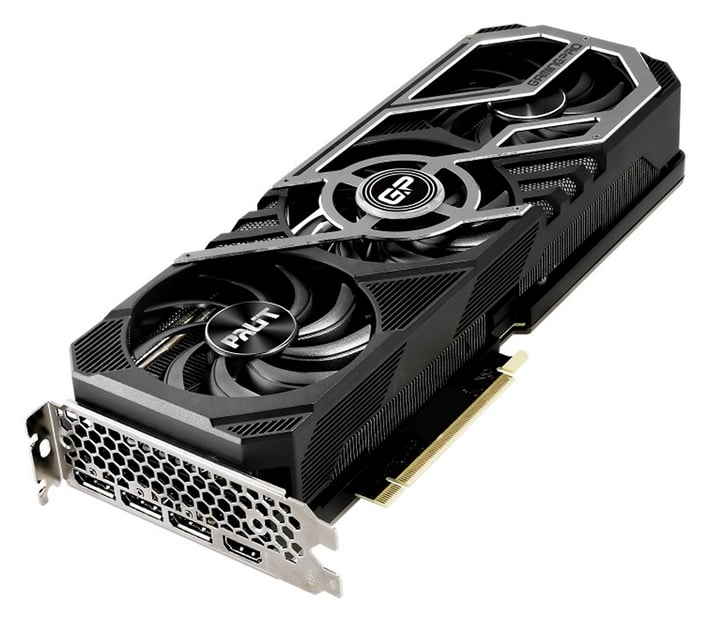 GeForce RTX 3080 cards should be available today. If you're itching to score one of these bad-boys, we wholeheartedly recommend them. At lower resolutions, you'll likely run into some CPU limits at this time, but high-framerate / high-refresh junkies or 4K (or above), there is nothing that can touch the GeForce RTX 3080 at this time in the $700-ish price range. Street pricing for the Palit GeForce RTX 3080 GamingPro OC wasn't available just yet, but we expect this card to be priced competitively with similar, custom RTX 3080's. If you dig the styling and triple-slot design, the Palit GeForce RTX 3080 GamingPro OC is a strong performer, that's well behaved in terms of its temperatures and acoustics.