We used the OnePlus Nord primarily on AT&T’s 4G LTE network in San Francisco, and on T-Mobile’s sub-6GHz 5G network in Portland, OR. Support for 5G on T-Mobile was unexpected since the Nord isn’t destined for the US -- no compatible 5G bands are listed in the specs, so this might be a fluke. Our AT&T SIM is only provisioned for 4G, so we didn’t get a chance to test 5G on AT&T. The Nord also works fine on Verizon’s 4G LTE network. 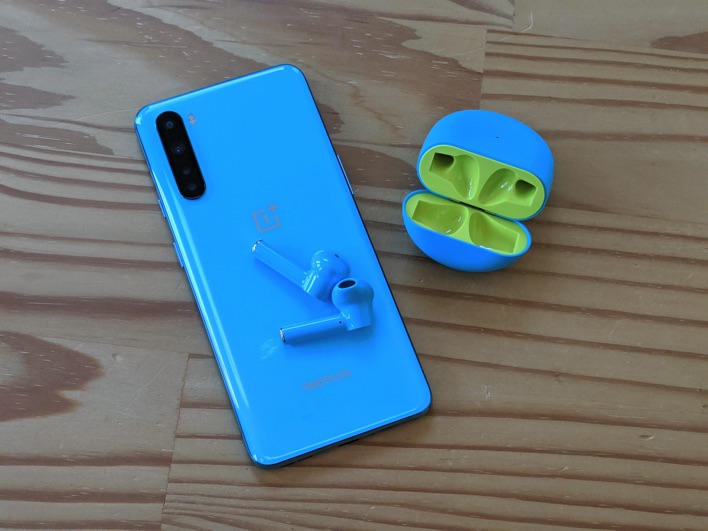 Overall, we didn’t experience any issues with call quality or data speeds. The mono speaker sounds adequate, and while there’s no headphone jack, the Nord supports both analog and digital USB Type-C audio devices. As a bonus, the built-in DAC and amp sound pretty decent with an analog dongle. The Nord also features Dirac audio enhancement for both speakers and headphones, plus aptX HD and LDAC for lossless Bluetooth audio.

When it comes to performance, two things stand out. The benchmarks (see details below), and the way the Nord feels. It’s the first time we’re reviewing a phone equipped with Qualcomm’s Snapdragon 765G and we’re impressed. Still, keep in mind that the engineers at OnePlus are skilled at optimizing Android performance, so the Nord is snappy right out of the box.

Looking at the numbers, it’s clear the SD765G falls halfways between the SD670 and the SD865, slotting somewhere between the SD845 and SD855 in terms of actual performance. That’s not bad, yet the OnePlus Nord feels quicker than that. In day-to-day use, it seems faster than phones like Google's Pixel 4 XL, almost matching the perceived performance of the current crop of flagships. Obviously, the 90Hz refresh rate helps.

As for the user experience, the OnePlus Nord is incredibly responsive. We only noticed a speed difference when we put it side-by-side with the OnePlus 8, or when playing the most graphically demanding games. Mind you, our review unit came with 12GB of LPDDR4X RAM and 256GB of UFS 2.1 storage. Other versions include 8GB / 128GB and 6GB / 64GB (India only). There’s no microSD support. 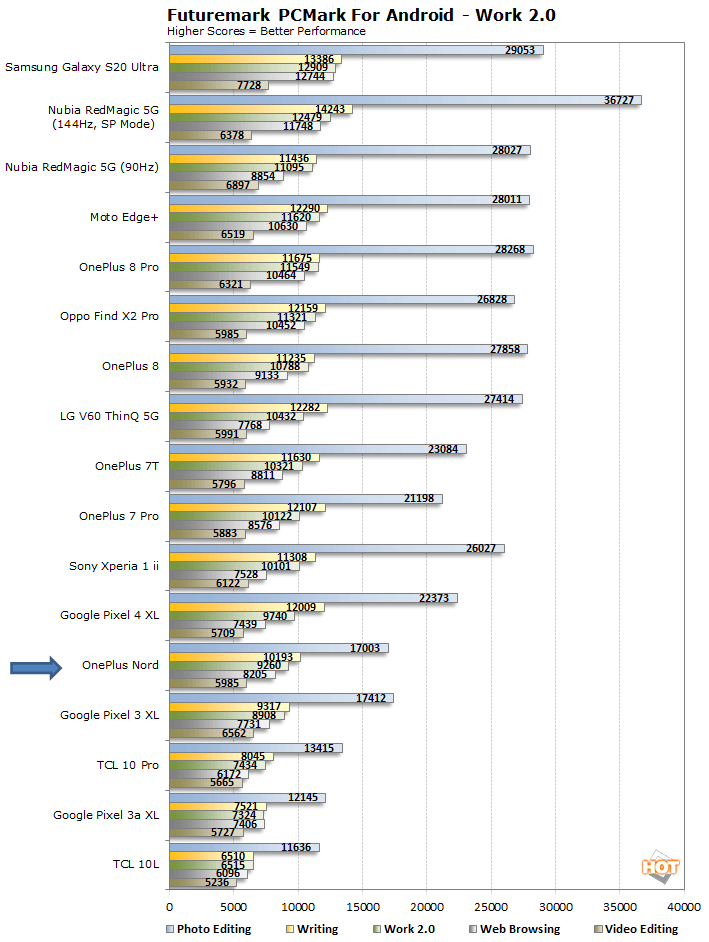 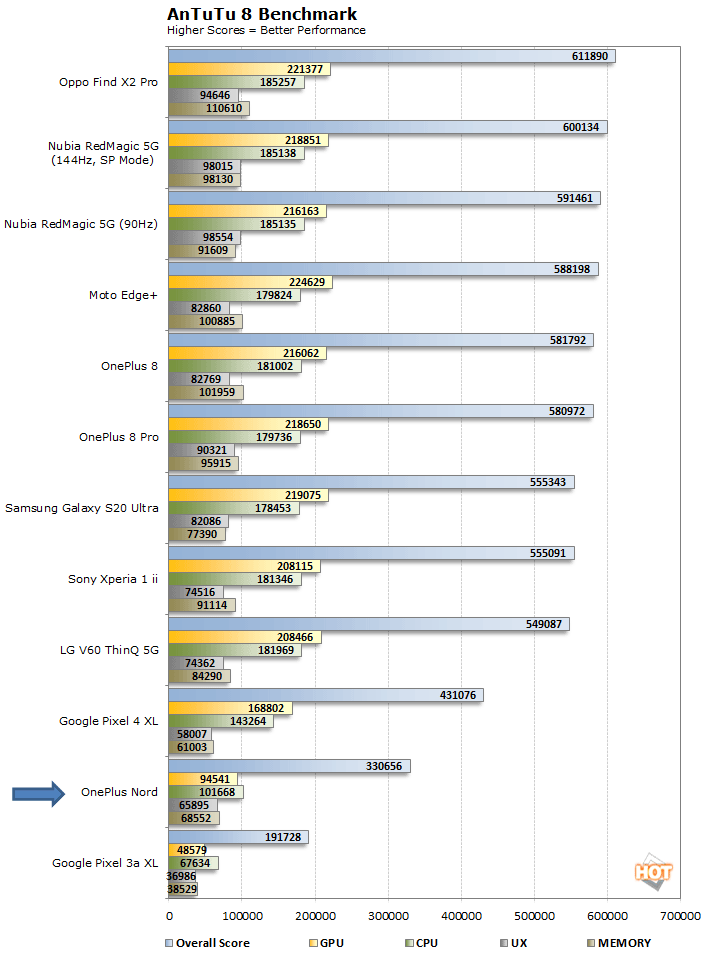 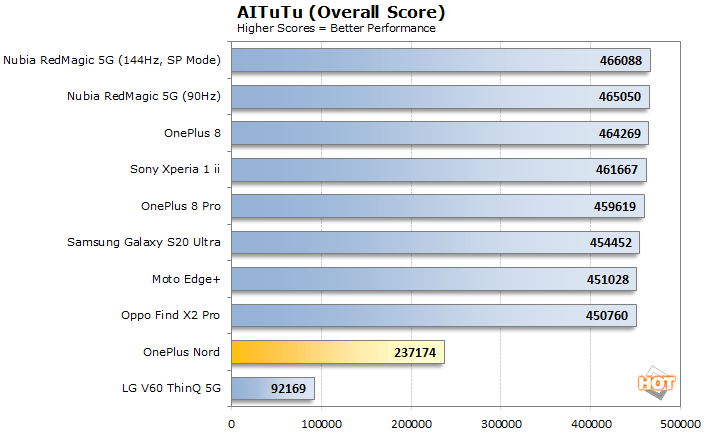 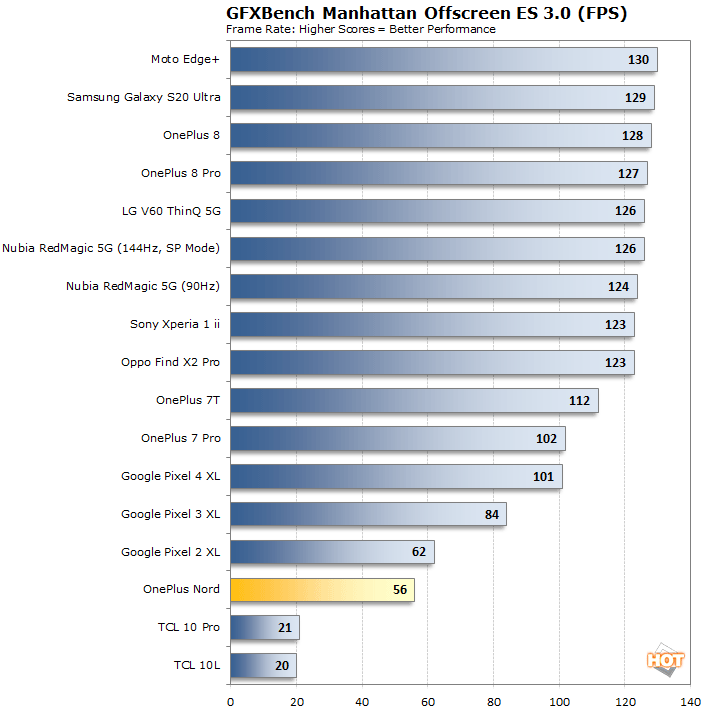 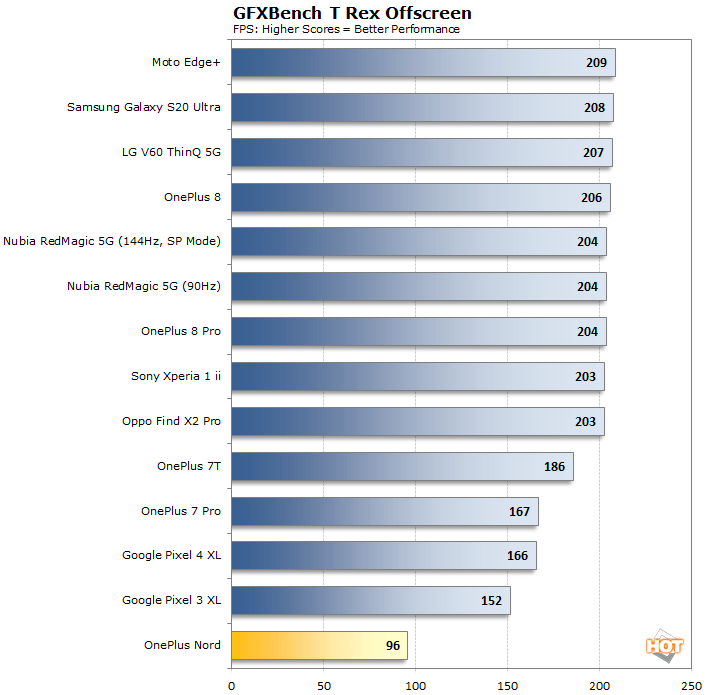 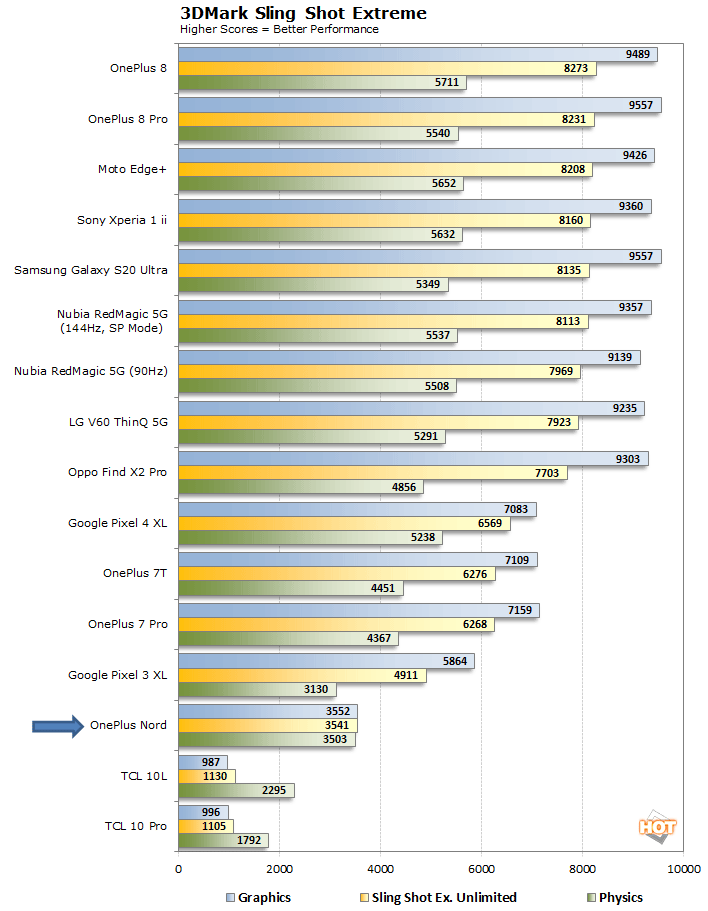 The OnePlus Nord also performed worse than current flagships in these 3DMark tests. It scored about half what the Snapdragon 855-equipped Pixel 4 XL scored, but still 3.5x better than the Snapdragon 665- and 675-equipped TCL 10-series.

The remaining specs are comprehensive, and include WiFi 5 (802.11ac), Bluetooth 5.1 (LE), NFC, A-GPS/ GLONASS / Galileo / BDS / NavIC, plus the usual suite of sensors. Strangely, the Nord lacks WiFi 6 (802.11ax), even though the Snapdragon 765G chipset supports it. OnePlus didn’t skimp on the linear vibration motor, though: it feels really nice. Ditto to the optical in-display fingerprint sensor, which is fast and accurate. 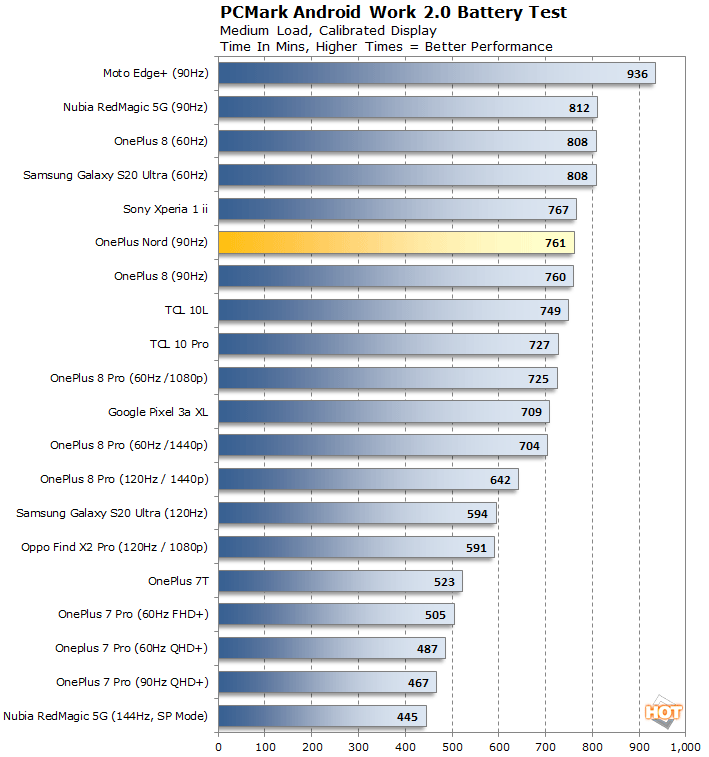 We’re also very satisfied with battery life. Despite the relatively small 4115mAh cell, the Nord lasted 12 hours and 41 minutes in our PCMark battery test (on LTE) -- with the display set to 90Hz, no less. That’s one minute longer than the OnePlus 8 and its 4300mAh cell. Of course, the SD765G is more power friendly than the SD865 since the X52 5G modem is integrated into the SoC. Still, well done OnePlus.

Finally, the OnePlus Nord supports 30W fast charging (Warp Charge 30T), and includes a matching charger in the box. That’s pretty awesome for a mid-range handset -- after all, some flagships only support 18W (cough, Moto Edge+, cough). As we already mentioned, the Nord lacks wireless charging. That’s understandable when you consider that the OnePlus 8 Pro is the first (and so far only) OnePlus phone with wireless charging.