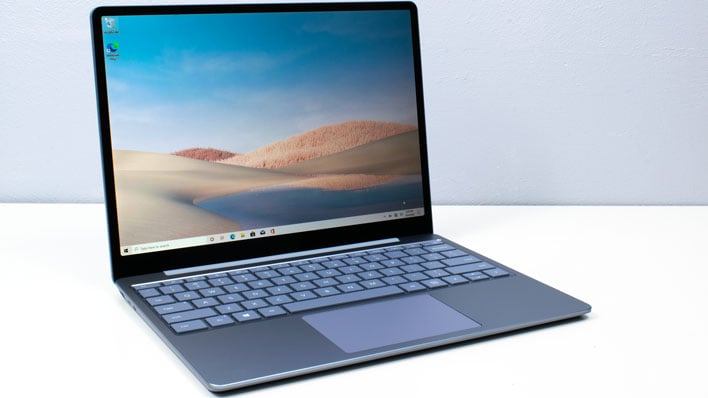 Lots of HotHardware readers love to learn about, look at, and experience high-end portable PCs with their sturdy build quality, luxurious materials, and high-end specs, but not everyone has the budget to buy one for themselves. An interesting subgenre of premium ultra-portable PCs is the upscale Chromebook, like Google's Pixelbook Go or Samsung's Galaxy Chromebook. Those machines have some gorgeous hardware with nice-enough specs, but can't run Windows apps. What if there was a premium middle ground with good performance at an attractive price? That's right where Microsoft has aimed its Surface Laptop Go.

First and foremost, the new Surface Laptop Go is a Windows PC with a variety of performance and price points that should fit many midrange laptop consumer's budgets. The recipe is fairly simple: Intel's 10th Generation Core i5 processors, enough RAM and storage to get the job done, wrapped in a lightweight anodized aluminum enclosure. Sprinkle in a dash of Windows 10, season with enough connectivity to taste, and bake until golden sandstone brown, platinum, or ice blue. Let's meet the new Microsoft Surface Laptop Go...

First thing's first: the Surface Laptop Go starts at a very attractive $549 price point. This actually undercuts the Pixelbook Go's $649 price tag while potentially delivering slightly better performance. The Surface Laptop Go has an Ice Lake-based Core i5-1035G1, which Intel fabss on its 10nm process with four cores, eight hardware threads via Hyper Threading, and 6 MB of L3 cache. The base clock might be a pokey 1GHz, but as long as cooling holds out, it turbos up much faster at 3.6GHz max boost. 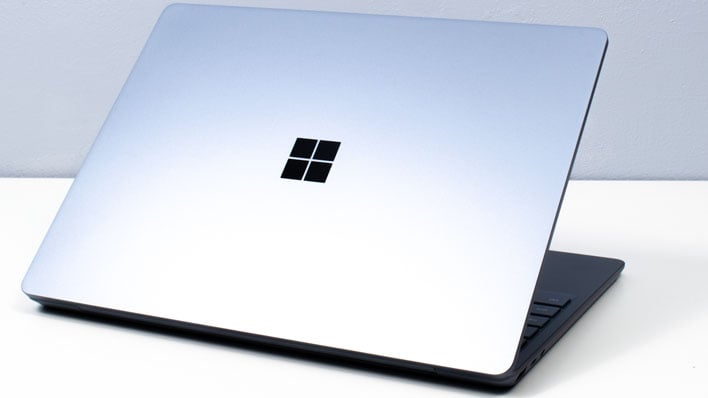 It seems like AMD might have been a good option for a budget notebook like this, but Microsoft disagreed. In a pre-review meeting with the Surface team, we asked if a Ryzen-based version might be in the works. Senior Director of Product Management Jochen Siegl noted that the team focused on an Intel processor because the Core i5-1035G1 "has the right performance" for the product. Even though Renoir processors are speedy, it seems that the company favored single-threaded performance with "good enough" graphics over Renoir's higher core-count/threading advantage and Radeon integrated GPU. Okay then, let's move on.

Storage in the Surface Laptop Go is an interesting compromise. To hit its low $549 price point, the base model has a 64 GB eMMC flash controller and 4 GB of system LPDDR4x RAM. That's adequate for a Chromebook competitor but won't set any land speed records. On the other hand, a mere $150 will double both the base memory and storage, along with upgrade the primary storage interface to an NVMe PCI-Express 3.0 controller. For $699, we think that's a worthwhile upgrade for anybody who wants to store more than few files on the device or dip into light duty content creation work perhaps. At the high end, the extra $200 to upgrade from 128GB to 256GB of storage feels like a lot less value by comparison. That doesn't buy any additional RAM or anything else—just double the storage, a cost per GB not even Apple charges these days.

Once we get past the memory and storage, every version of the Surface Laptop Go has basically the same specs from the Core i5 on down to the aluminum exterior. The system comes built into a really nice-feeling anodized aluminum frame in one of three colors. Our review unit is decked out in Ice Blue, but Sandstone Brown and Platinum are also options. The Surface Laptop Go feels quite small, owing to its 12.3" 3:2 display and miniscule bezels on each side. Thanks to lightweight materials, including a polycarbonate bottom to go with the aluminum lid and keyboard deck, the system weighs in at just 2.45 pounds. 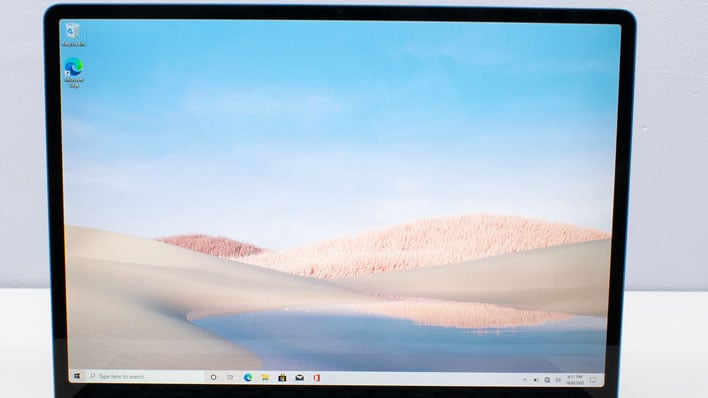 The Surface Laptop Go's display has an unusual 1536x1024 resolution, and despite its 12.3" diagonal measurement, Windows 10 doesn't bother scaling text larger than 100%. That's pretty nice, since there's a large amount of vertical screen real estate compared with many of its contemporaries, despite those machines having higher resolutions, because those machines scale Windows to 125% or bigger. The display works out to have a pixel density of 148 ppi, which feels and looks just about right at the default scaling.

Interestingly, the screen has all four corners rounded off, which gives the Surface Laptop Go a unique look. However, the corner radius isn't so wide that it cuts off much of the image. It's an interesting effect, though. The display itself is fairly bright, but colors appear somewhat washed out at wider viewing angles. As can be seen clearly in our photos, turning the notebook to an angle dims the screen considerably. The system has a touch-enabled display, but no Windows Ink or active stylus support.

Above the display sits a 720p webcam with a relatively wide f/2.0 aperture. It pulls in a good amount of light and as a result, images are better than most. It's still important to have good lighting, but we found it easier to produce a usable video chat setting than on several laptops we reviewed recently. Oddly enough, however, this is a bit of a downgrade from the Surface Go 2 tablet, which has a 5 megapixel front-facing camera with a 1080p video resolution. We can hardly complain, however, since laptops that cost twice as much as our review unit ship with lower quality cameras, and this is still a step above thanks to its wider aperture and ability to pull in more light.

On the security side, the webcam has no infrared sensor. There is a fingerprint sensor built into the power button, though. That sensor was very fast at recognizing our fingerprints. The lack of an infrared sensor doesn't bother us, since those cameras tend to take their sweet time recognizing a face and needs extra training for glasses on and off. The sensor works with Windows Hello as expected, too. 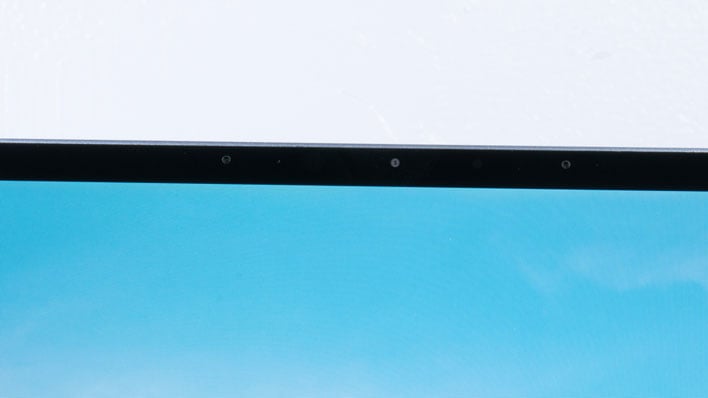 A single, wide hinge holds the display upright. There's enough tension here to keep the display positioned right where we want it, but it's not quite loose enough to open one-handed. Perhaps that's due to a magnetic latch system that pulls the system closed once it's down to about 1/4" from shut. Unfortunately it's not a 360-degree hinge, and doesn't quite open a full 180 degrees, but it's enough to use in just about any clamshell position. Tucked in right in front of the hinge is the only ventilation on the system. Warm air wafts up from the vent when the fan isn't spinning, and we can feel a slight breeze while the fan whirrs away.

The keyboard deck is full aluminum just like the lid. Built into the deck is a chicklet-style keyboard, which basically goes edge to edge. There's about 1/4" of room on either side. Keys have a totally-adequate 1.3 millimeters of travel. While there's a little softness to the keyboard, it stays sturdy and feels supported, and response is good enough that we didn't feel that we were losing key strokes or double-typing letters. We write an awful lot of laptop reviews using nothing but the test subject's keyboard, and in this case, it's perfectly serviceable.

Next to the keyboard is a generous (for the form factor) track pad with integrated buttons. Microsoft told us that the design team could have gone with a slightly larger keyboard, using the remainder of the unit's width, but chose to favor a larger track pad that allowed moving the mouse pointer across the screen without multiple movements and without being overly sensitive. We think the compromise is just right, as the track pad is big enough to use comfortably. We usually favor mice when possible, but with a notebook, having a solid track pad can be the difference between usable and not. 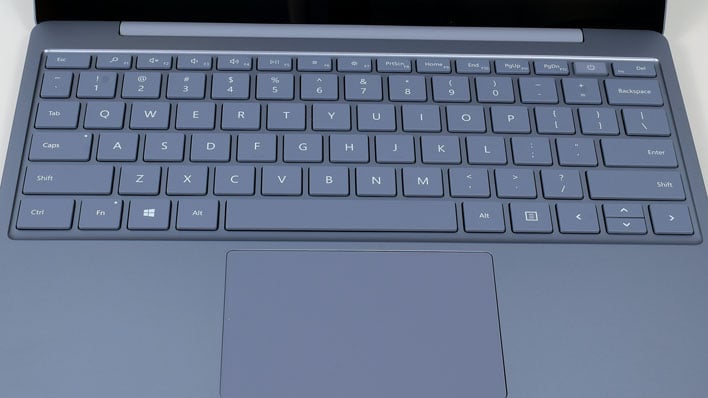 There are no speaker grilles in the Surface Laptop Go. That's not due to the lack of speakers, however, as they're right below the keyboard. Microsoft calls them Omnisonic, and they get plenty loud without distorting. There is, as always, a noted lack of bass, but voices during web conferences and YouTube clips were crisp and clear. For audio input, there's a dual-microphone array on the top of the display flanking the webcam on each side, which did a nice job in audio chats. Callers could hear us without issue. For users who need more from their audio setup, a standard four-pole combination headset jack can accommodate just about any analog headset.

Perhaps owing to its small size and lower price point, there's not a ton of expandability on the Surface Laptop Go, but everything here is essential. On the left side is one each of USB 3.2 Type-A and Type-C port along with that combination headset jack. The USB ports are the nice and speedy USB 3.2 Gen 2 variety that top out at 10Gbps. While the included charger doesn't fit, that Type-C port can also handle USB power delivery, and also outputs DisplayPort or HDMI via DisplayPort Alternate Mode when connected to compatible cables. On the right is Microsoft's proprietary Surface Connect port. The beveled edges of the Surface Laptop Go's underbelly make it kind of challenging to get the magnetically-attracted charger's connector to fit in the slot, but once it's there it stays pretty solid.

One final note on the Surface Laptop Go's body is that it's completely sealed. As we mentioned before, there are no speaker grilles, and the bottom doesn't seem to have so much as a vent, let alone screws or a way to pull it apart. We were a little faint of heart for the possibility of getting into a lot of glue, so we did not attempt to separate the soft-touch polycarbonate bottom from its aluminum body. As a result, we can't get a good gander at the cooling system, battery, or SSD to figure out what might user-serviceable in here. 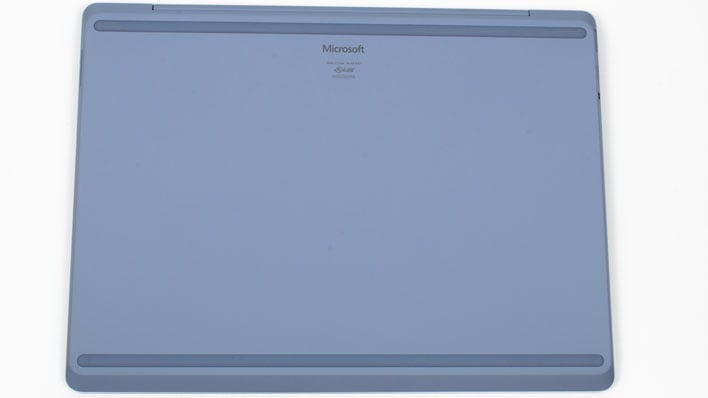 We did spy a screw in each corner underneath the padded foot bars, but removing those didn't yield any sort of other entry point. Since opening Surface laptops has traditionally been difficult (even the most-repairable Surface ever, the Surface Laptop 3, only scored a 5 for repairability (according to iFixit, which actually isn't half bad), we figure users won't be able to upgrade the machine easily. We're also pretty sure that the RAM is soldered, since LPDDR4x doesn't come in SO-DIMMs currently. The SSD might be upgradeable, but it's only upgradeable in theory if we can safely get inside.

On the software side of things, the Surface Laptop Go came to us running Windows 10's 2004 Spring 2020 update. Because it's a Microsoft product, it's pretty free of third-party bloatware. Office and OneDrive are installed out of the box, but otherwise the only extra software was related to system drivers. We always like testing our laptops without a bunch of extra software potentially bogging the system down and robbing performance, and it's nice that Microsoft stayed true to its loadout here.

Now that we've taken a tour, let's see how Microsoft's budget notebook fares in our battery of benchmarks.
NEXT PAGE