You’d think the OnePlus Nord might fall short in the camera department, but that’s not the case. In fact, it packs two more shooters than the OnePlus 8 (2 in front and 4 in back vs. one in front and 3 in back). Obviously, camera count isn’t a litmus test for imaging performance. What matters more is that the Nord inherits the OnePlus 8’s 48MP 0.8-micron main shooter, including the f/1.75 lens, and more significantly, OIS. That’s a pretty big deal. 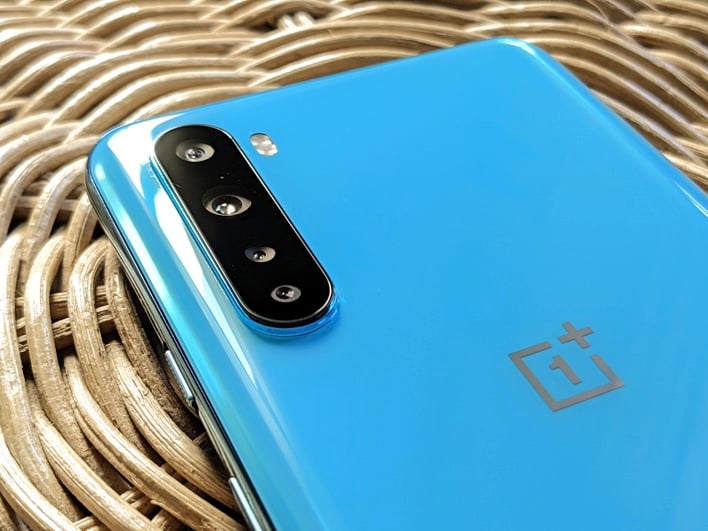 For the main camera, it’s using Sony’s popular IMX 586 Quad-Bayer sensor, which “bins” (combines) sets of 4 pixels into 1.6-micron superpixels for a 12MP effective resolution and improved low-light performance. The lackluster 2MP f/2.4 macro carries over as well, with the same compromises (lack of AF) as the original. Strangely, the Nord gains a 5MP f/2.4 depth sensor -- presumably to help with portraits -- but it’s not user-accessible.

What’s got us more excited, though, is that the selfie camera supports up to 4K/1080p 60fps video recording (stabilized). The rear shooter maxes out at 4K30fps or 1080p 60fps (stabilized). It also supports 4K/1080p 30fps time lapses, plus 1080p 240fps slow motion. You also benefit from OnePlus’ night mode (called Nightscape) on the 48MP main camera and 8MP ultrawide, along with all the usual shooting modes (Portrait, Pro, Panorama).

Like the OnePlus 8, the Nord lacks a dedicated telephoto lens, and relies on digital zoom, which crops the 48MP main sensor. But thanks to OIS and computational photography, the results are fine up to about 2-3x magnification. We just don’t recommend going much beyond that. In all, this is a surprisingly well-rounded setup for a sub-$500 handset. Other than the lower-res Ultrawide lens, the Nord’s camera specs actually beat the OnePlus 8’s.

So what do the resulting photos and video look like? Pretty nice, actually. Obviously, the Nord takes very similar pictures to the OnePlus 8, especially with the main shooter. Daytime images are good, with accurate colors and exposure. Low-light performance is less consistent. Night shots are a bit soft in Auto mode, and a lot better in night mode. Still, the Nord struggles with white balance in artificial light, especially indoors.

The selfie cameras perform well, but there’s massive shutter lag when shooting in low light. We think this might be a bug, since the images are OK. Video recording is decent, too. Audio is captured in stereo, and OnePlus’ optional Super Stable mode on the main shooter (4K/1080p 30fps) keeps things extra steady. Overall, we’re happy with the Nord’s cameras, and we think most folks will be too.

[Some of our sample photos were taken while traveling. While we realize this isn’t ideal right now, it was unavoidable. Know that we always take precautions like wearing masks and doing social distancing when testing phones - Ed.]