OnePlus 8T Review: A Great 5G Phone In Search Of A Discount

We tested the OnePlus 8T primarily on AT&T and T-Mobile’s networks in San Francisco, and didn’t experience any problems. Calls were loud and clear, and data speeds matched other devices on these networks. Despite the specs listing sub-6GHz 5G bands n5 (850MHz) for AT&T, plus n71 (600MHz) and n41 (2.5GHz) for T-Mobile, the 8T only supports 5G on T-Mobile. AT&T and Verizon compatibility is limited to 4G LTE. 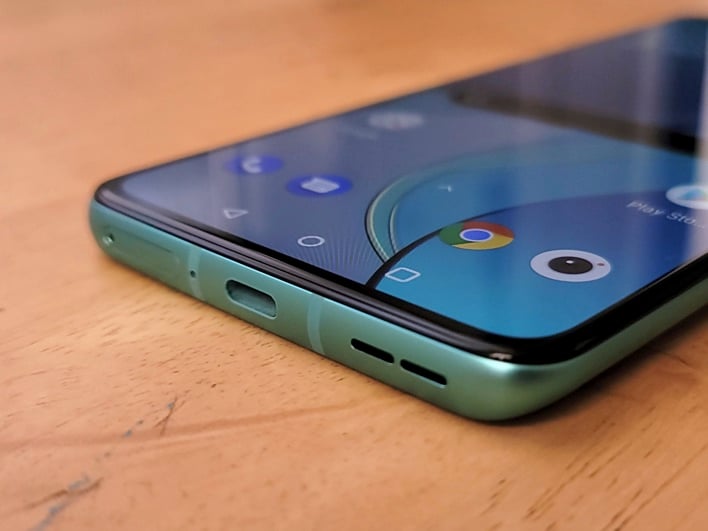 Obviously, there’s no provision for mmWave 5G. Audio performance is excellent, thanks to stereo speakers (earpiece and bottom edge driver) that sound rich and full. We’ve heard better, but we’re satisfied with this setup, and we think you will be too. Sadly, this phone lacks a headphone jack, but it works with both analog and digital USB Type-C devices and supports aptX HD and LDAC lossless audio over Bluetooth.

As you’d expect, the OnePlus 8T is a performance beast. But unlike last year’s OnePlus 7T, which received the faster (at the time) Snapdragon 855+, the 8T didn’t get a spec bump to the Snapdragon 865+. While this is slightly unexpected, it’s not a deal breaker. This means the 8T packs the same Snapdragon 865 as the OnePlus 8, along with Qualcomm’s X55 5G modem, 12GB of LPDDR4X RAM, and 256GB of UFS 3.1 storage.

OnePlus also offers an 8/128GB version outside the US, but there’s no microSD support, regardless of model. Between the flagship SoC, smooth 120Hz display, gobs of RAM, fast storage, and slick new build of Android 11 (OxygenOS 11), the 8T feels delightfully quick no matter what you’re doing. It handled everything we threw at it without skipping a beat. Our benchmarks confirm this, despite Android 11’s notable performance drop. 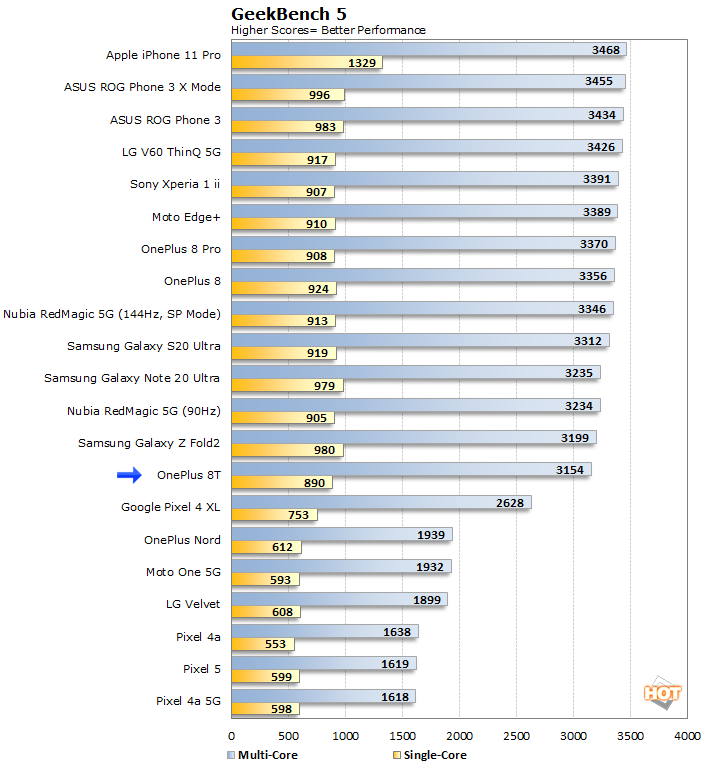 In these Geekbench 5 tests, the OnePlus 8T finishes in the middle of the pack. The iPhone 11 Pro still has the strongest single-core performance overall, but the 8T lags behind other Snapdragon 865-equipped Android 10 devices. You can get a good feel for the Android 11 performance drop by comparing the 8T results with the OnePlus 8 scores. 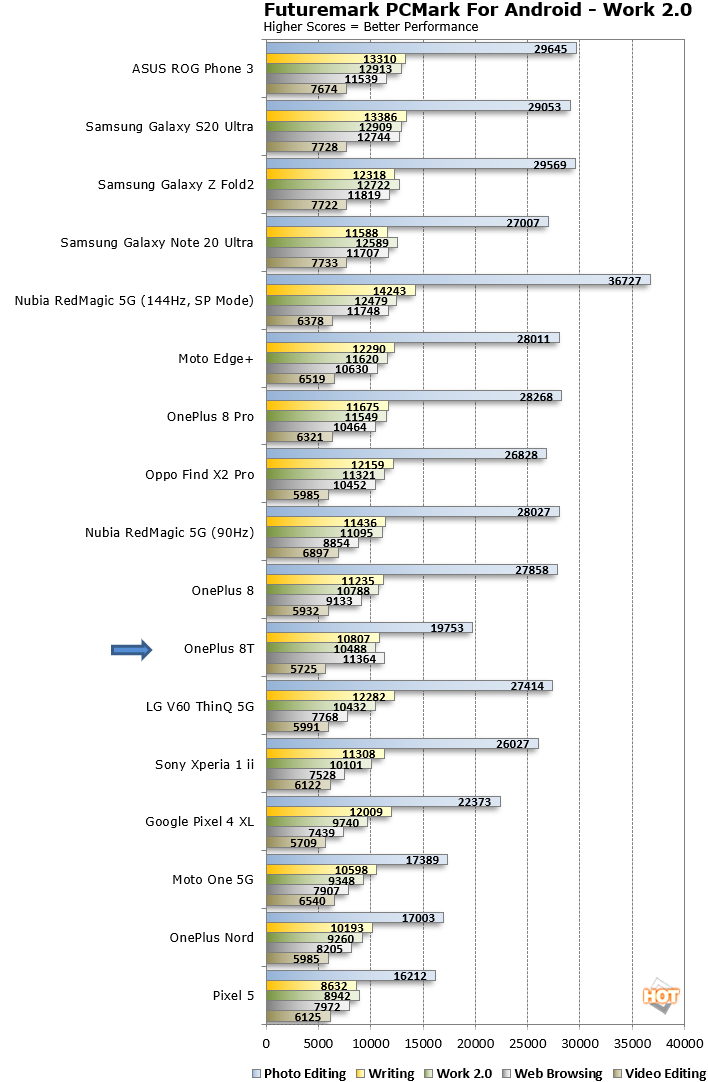 The OnePlus 8T scores between the LG V60 ThinQ 5G and the OnePlus 8. While the Snapdragon 865 powering this device offers strong all-around performance for the workloads used in PCMark for Android, there's room for improvement. The Photo Editing score in particular illustrates the Android 11 performance drop. 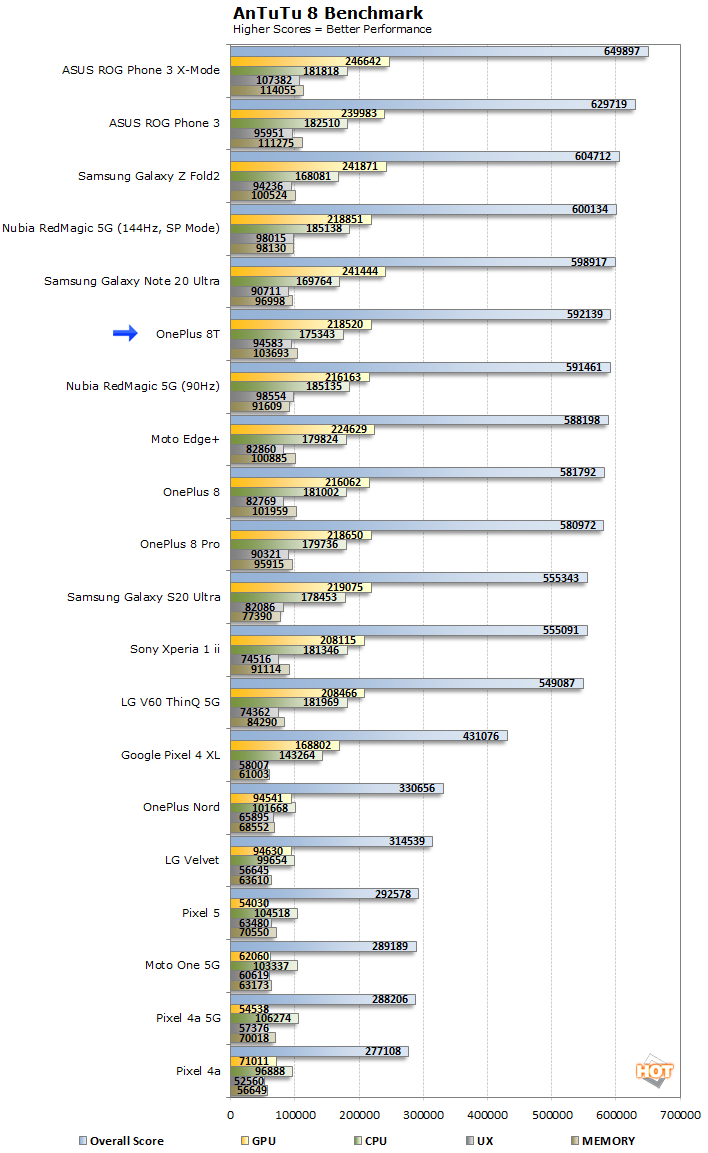 The effects of the Android 11 performance drop is less noticeable in the AnTuTu benchmark. Here, the OnePlus 8T comes in second after Samsung's Galaxy Note 20 Ultra and climbs near the top of the charts -- leaving the OnePlus 8 behind.

Normally we have an AiTuTu result here. AITuTu evaluates the AI performance of a device by leveraging two mainstream neural network models for machine learning and AI -- Inception v3 for Image Classification and MobileNet-SSD for Object Detection. The benchmark determines the device’s accuracy and speed when inferring data from each workload...

Unfortunately, while we were able to start AITuTu on the OnePlus 8T, it just kept hanging while loading just before starting the image classification test. The 8T remained responsive, but AITuTu never completed. We tried both the latest APK from AnTuTu and an older known working APK without luck.

Next we're checking how the OnePlus 8T compares in GFXBench, which has been one of the standard mobile graphics/gaming performance benchmarks for years. To ensure that display refresh (v-sync) and resolution aren't limiting factors, we're comparing off-screen test results here. GFXBench tests OpenGL ES graphics workloads and we're specifically testing OpenGL ES 3.0 and 2.0... 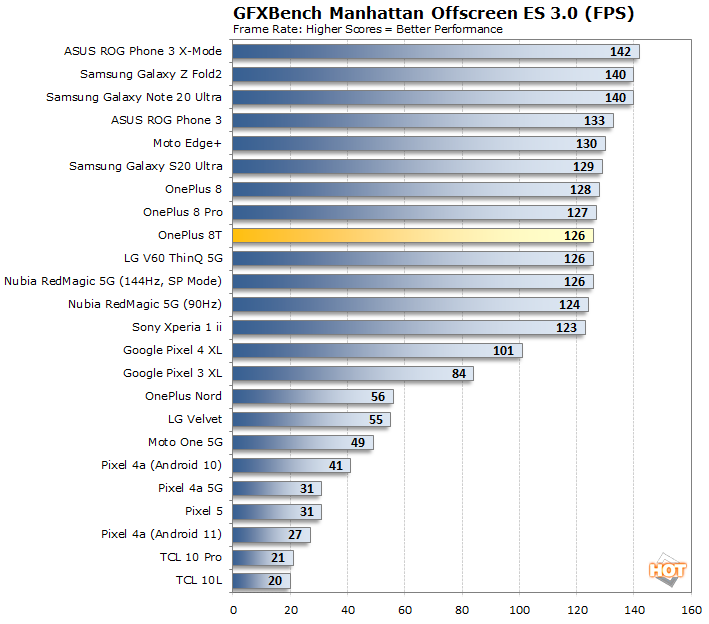 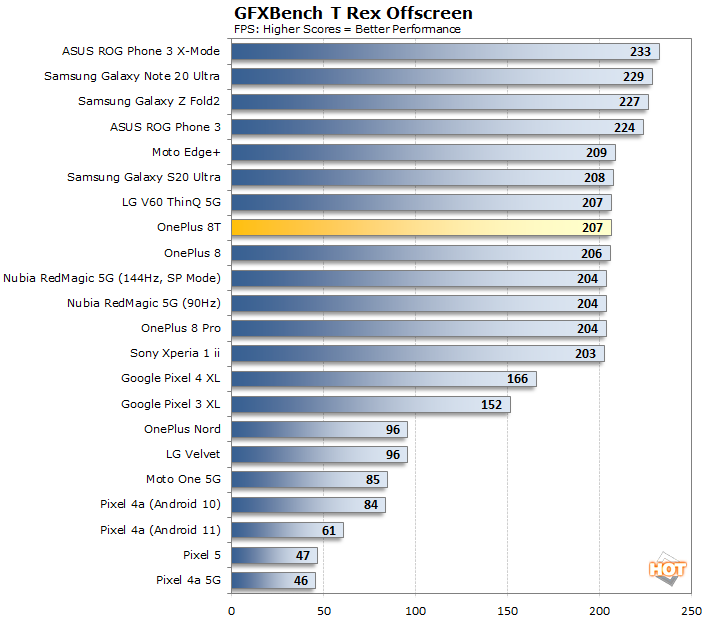 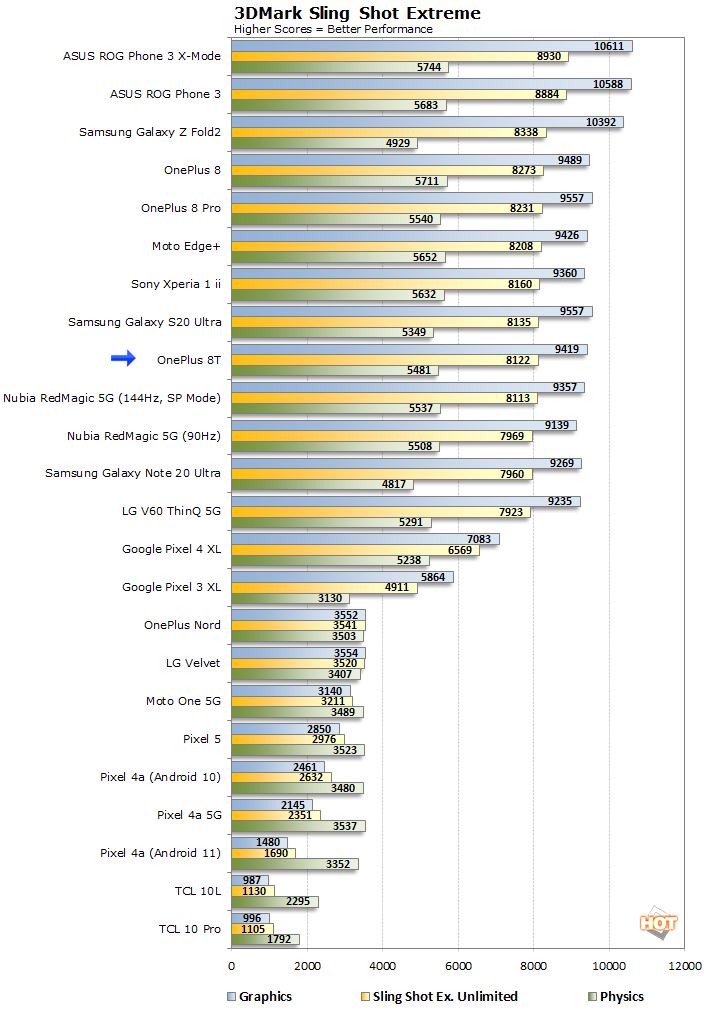 The OnePlust 8T also performed well in these 3DMark tests. There's still a small gap between the 8T and the OnePlus 8 -- likely a result of the Android 11 performance drop.

In terms of specs, the OnePlus 8T matches the OnePlus 8. This includes WiFi 6 (802.11ax), Bluetooth 5.1 (with LE), NFC, and A-GPS / GLONASS / Galileo / Beidou positioning, plus the standard assortment of sensors (accelerometer, compass, gyroscope, ambient light, proximity, and barometer). Haptics are great, thanks to a high-quality linear motor, and the optical in-display fingerprint sensor is one of the quickest and most reliable we’ve used. 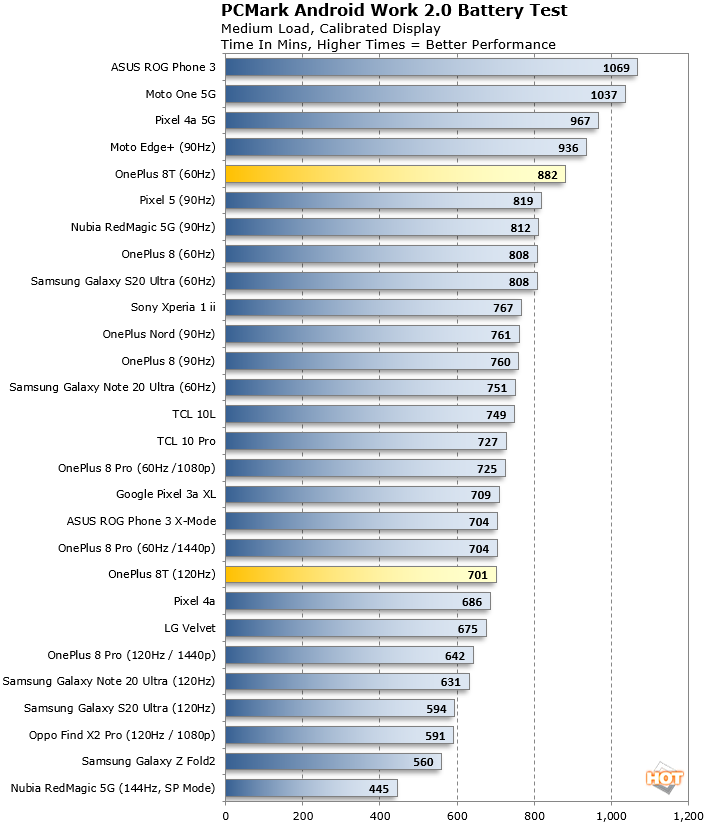 Battery life is pretty solid. In our PCMark test, the 4500mAh battery lasted 11 hours and 41 minutes at 120Hz, so we’re confident most people won’t have any issues using this handset for a full day. Also, dropping refresh rate down will deliver major gains in battery life as well (as you can see in the graph above). The OnePlus 8T supports 65W fast charging (and 27W via USB PD). It achieves this by charging two identical 2250mAh cells in parallel at 10V and 6.5A. As a bonus, the supplied charger also fast charges USB PD devices (up to 45W).