3DMark Time Spy is a synthetic DirectX benchmark test from UL. It features a DirectX 12 engine built from the ground up to support bleeding-edge features like asynchronous compute, explicit multi-adapter, and multi-threading. Time Spy is designed to test the DX12 performance of the latest graphics cards using a variety of techniques and varied visual sequences. This benchmark was developed with input from AMD, Intel, Microsoft, NVIDIA, and the other members of the UL Benchmark Development Program, to showcase the performance and visual potential of graphics cards driven by close-to-the-metal, low-overhead APIs. 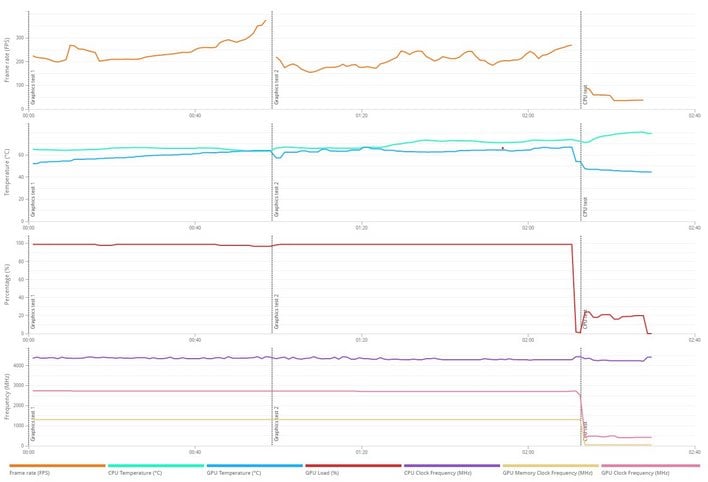 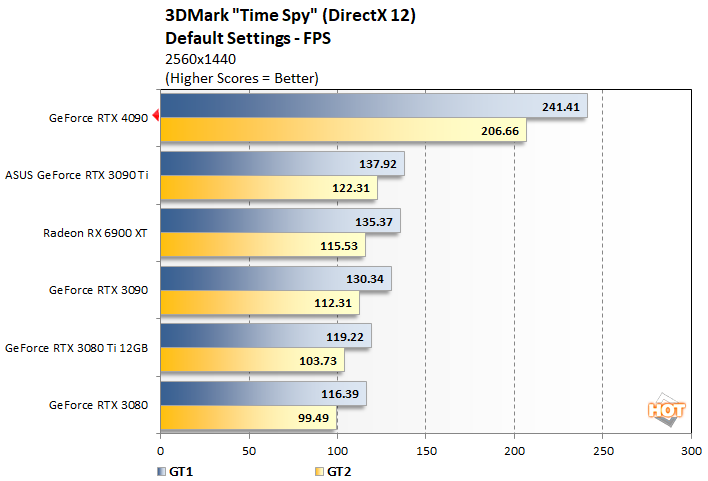 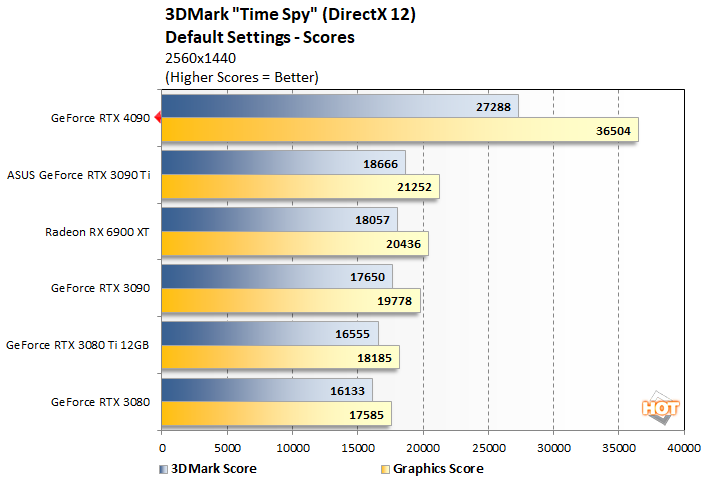 In our first graphics benchmark, the GeForce RTX 4090 continues to dominate, crushing all of the other GPUs we tested by a wide margin and nearly doubling the performance of the popular GeForce RTX 3080. 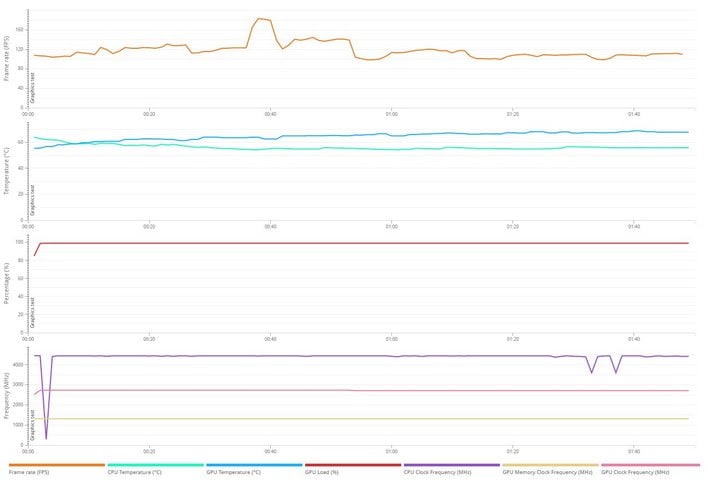 We also tested the cards with UL's DirectX Ray Tracing Feature test. This test is laser-focused on path-tracing performance, and uses few of the card's other resources. 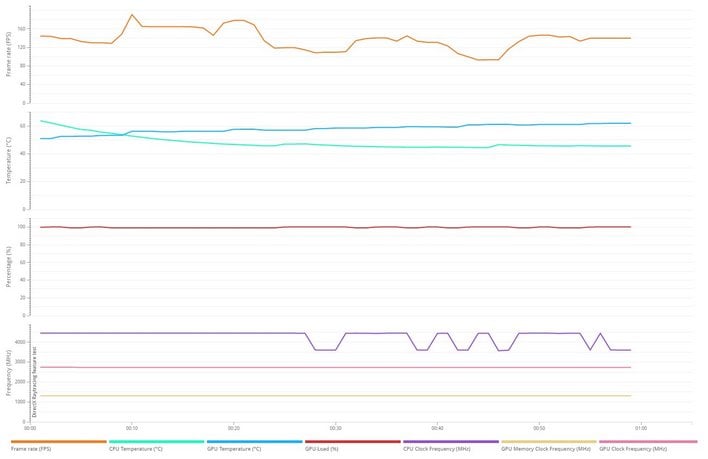 When examined solely under the lens of DXR ray-tracing, the GeForce RTX 4090 looks even more impressive. In this test, NVIDIA's newest flagship more than doubles the performance of the GeForce RTX 3090 Ti and makes everything else look paltry by comparison.

Crytek’s Neon Noir demo was created with an advanced version of CRYENGINE’s Total Illumination technology, which is used in Crysis Remastered to enhance the game’s visuals. Neon Noir was developed on a customized version of CRYENGINE 5.5, and is both API and hardware agnostic. It enables ray tracing to run on virtually any modern GPU, however, future integration of the technology will be optimized for the latest GPUs and APIs like Vulkan and DX12... 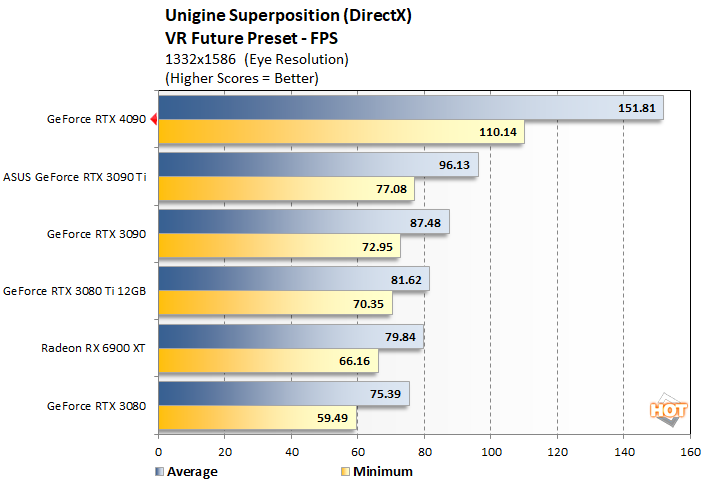 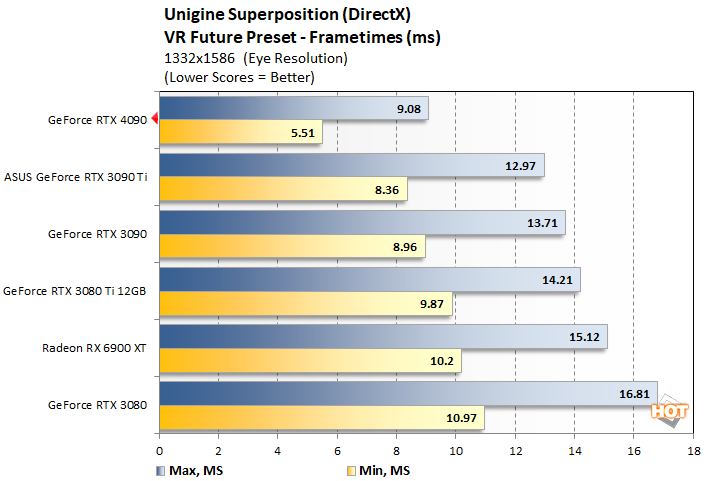 Superposition's VR Future benchmark gets completely maxed out by the GeForce RTX 4090. 10,000 is the top score possible in this benchmark, which makes the overall score seem moderately better than the RTX 3090 Ti. But looking at the individual frame rates and frame times, the GeForce RTX 4090 continues to offer nearly double the performance of some of today's highest-end graphics cards. 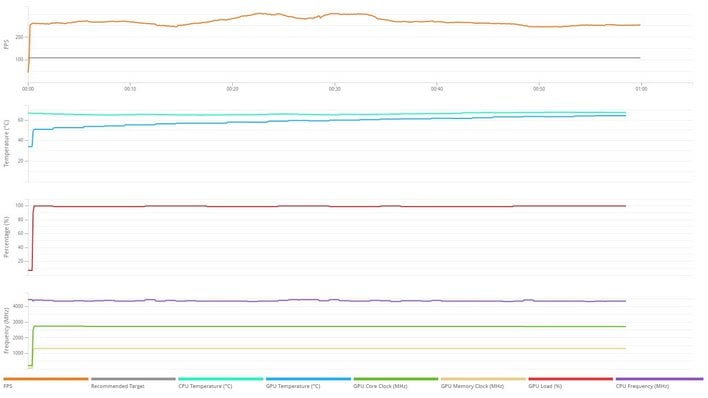 VRMark tells essentially the same story as Unigine's VR test. Here, the GeForce RTX 4090 doubles the performance of the Radeon RX 6900 XT and everything below it, and crushes even the mighty GeForce RTX 3090 Ti.
PREV PAGE NEXT PAGE