Crysis Remastered Has A Punishing 'Can It Run Crysis' Mode, Here's A First Look

Never let it be said that Crytek and its Crysis franchise are not self aware. Proving otherwise, the developers of Crysis Remastered have added a high fidelity setting dubbed "Can It Run Crysis?" to the upcoming PC version of the remake, which promises to tax your system "with unlimited settings." Shown above is a screenie taken with the new setting.
Crytek is playing off the long running joke of asking, 'Yeah, but can it run Crysis?', whenever there is a new hardware announcement. The original Crysis was notoriously punishing on PCs of its era. This time around, the minimum and recommended settings for Crysis Remastered suggest it will be considerably easier to run on modern hardware.
Here is a look at the requirements...
Minimum Requirements
Recommended Requirements

It is not clear what will be required to fully tap the baseline 'Can It Run Crysis?' setting, only that it will be a demanding mode.
"Today's post is dedicated to our PC community! We want to show you, for the very first time, an in-game screenshot using the new 'Can it Run Crysis?' Graphic mode, which is designed to demand every last bit of your hardware with unlimited settings— exclusively on PC!," Crytek stated on Twitter.
The reactions to the screenshot have been mixed. One user (Isaac Clarke) uploaded a photo of the original game with the settings maxed out, for comparison... 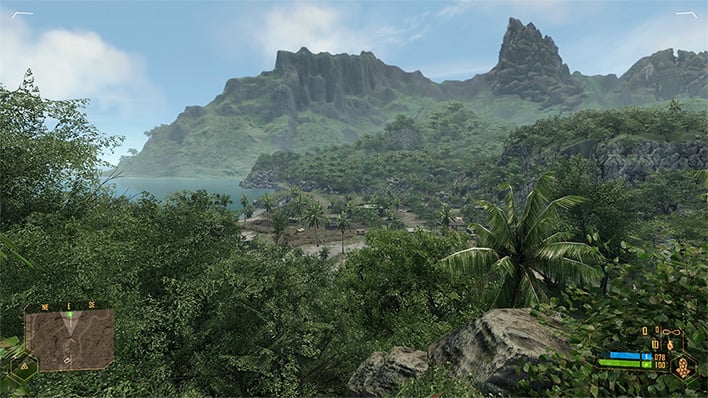 "This 'remaster' looks like a downgrade on many fields. 'Oh wow, more rocks on the mountains!' Uhuh, in the meantime the artistic direction got lost somewhere. WHY DOES IT LOOK LIKE FORTNITE!?!?!?," Clarke commented.
Some others were not as critical. Cubic Ralsei, for example, said they were "extremely impressed by the detail with the trees and cliffs in the distance."

Regardless, it's hard to portray a game in a single screenshot, so we will reserve our judgment until it arrives on PC. Crysis Remaster has already launched for the Nintendo Switch, but will arrive on PC, PlayStation 4, and Xbox One on September 18, 2020. The PC version will be exclusive to the Epic Games Store.