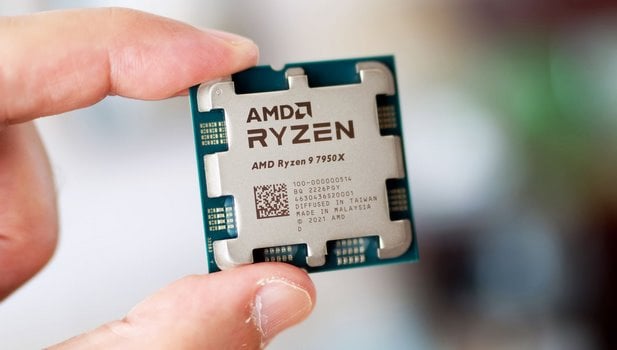 Last month, AMD officially took the wraps off of the Zen 4-based Ryzen 7000 series processors during its “together we advance_PCs” livestream event. During the stream, AMD CEO Dr. Lisa Su and other members of the executive team revealed four new processors in the Ryzen 7000 series, and showed off an array of new motherboards and memory designed for the platform.

At this point, many of you will know that the Ryzen 7000 series signifies a big step forward for AMD. The processors are based on a new microarchitecture and they move away from PGA (pin grid array) package designs in favor of LGA (land grid array). New chipsets also are arriving alongside the Ryzen 7000 series, and the platform also supports PCIe 5.0 and requires the latest DDR5 memory.

AMD has disclosed virtually everything about the Ryzen 7000 series, its supporting chipsets, and the Zen 4 architecture. However, today we get to actually take the processors for a spin on our own and show you how they perform in a variety of workloads and benchmarks. We also have some fresh details to share with you today about Zen 4 and the platform as a whole.

There is a ton to cover, so without further delay, we should probably get right to it... 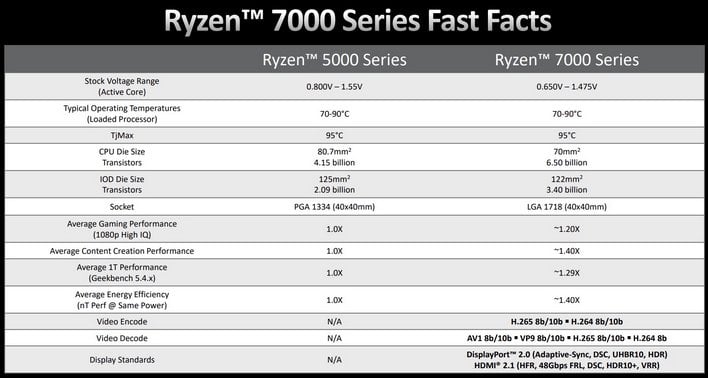 AMD’s goal with the new Ryzen 7000 series was to offer the fastest CPU core for gamers, and the most compute performance in the mainstream desktop CPU segment for creators. Without giving away spoilers too early, AMD appears to have pulled it off—as of today, at least. 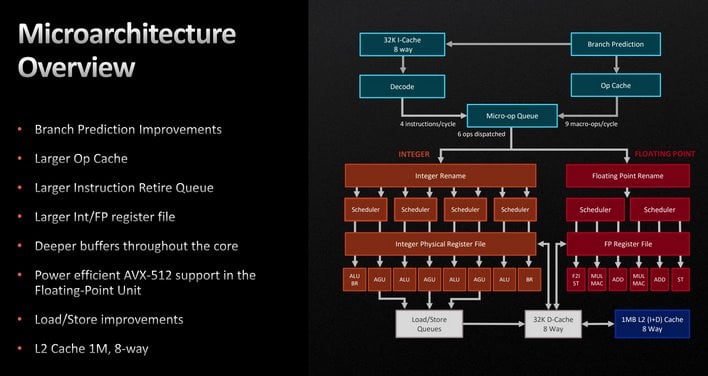 Everything about the Ryzen 7000 processors and the supporting technology contributes in some way to advance the performance and capabilities of the total platform—the Zen 4 architecture, more advanced manufacturing process, new IO die, and new chipsets all add something to the overall equation. 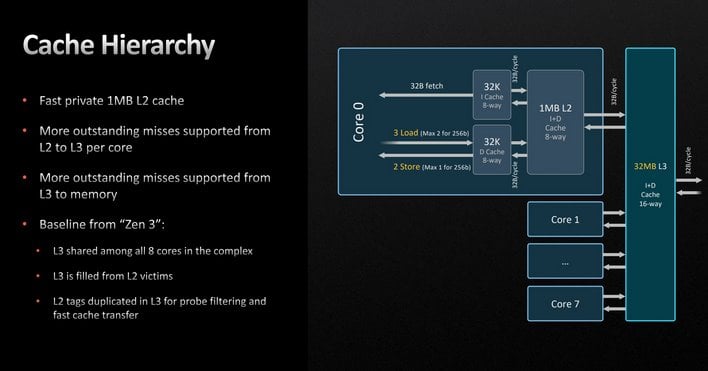 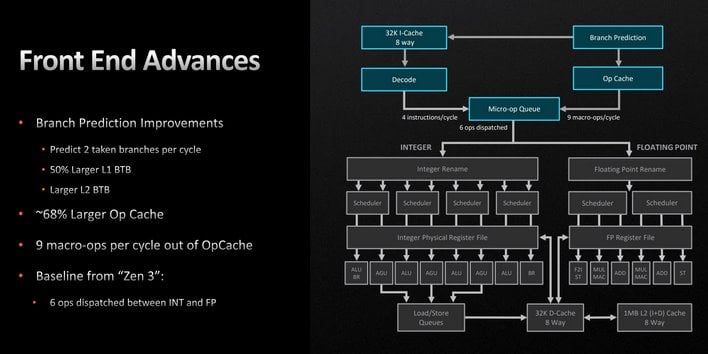 Zen 4 is a power-optimized architecture that AMD designed to improve both single- and multi-threaded performance, while also improving overall efficiency. Single-thread gains will come by way of an approximate 13% IPC uplift, which is achieved through an array of improvements over Zen 3. Zen 4 features improved branch prediction, an approximately 68% larger micro-op cache (in addition to the larger L2), larger L2 translation lookaside buffer (TLB), 25% larger Instruction Retire Queue, deeper Integer and Floating Point registers, and 50% larger L1 and L2 branch target buffers (BTB). As AMD puts it, there are “deeper buffers throughout the core.” 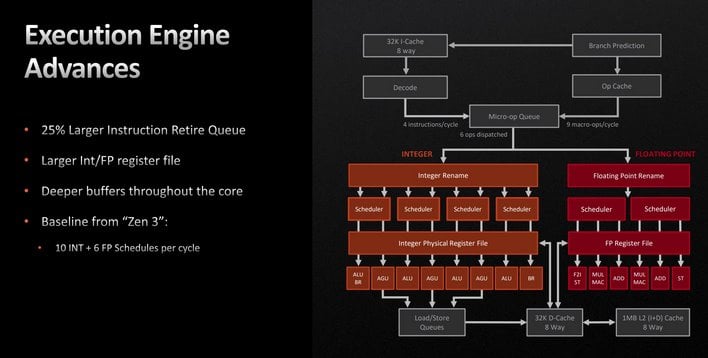 In addition to the IPC enhancements offered by Zen 4, Ryzen 7000 series processors will also boost to higher frequencies, so cumulative single-thread improvements should be in the neighborhood of 29% versus the Ryzen 5000 series. 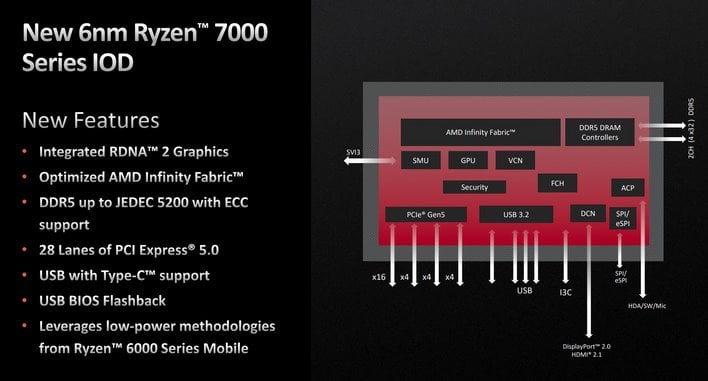 Ryzen 7000 series compute chiplets will be manufactured on a 5nm process node, employing 4th gen FinFET technology and an enhanced 15-layer telescoping metal stack. Due to the more advanced process and design optimizations, die area is reduced approximately 18% over Zen 3. AMD is also claiming an approximate 50% area reduction versus Intel’s 12th Gen Core processors based on Alder Lake; a Zen 4 core and its associated L2 cache require about 3.84mm2 versus 7.46mm2 for Alder Lake. 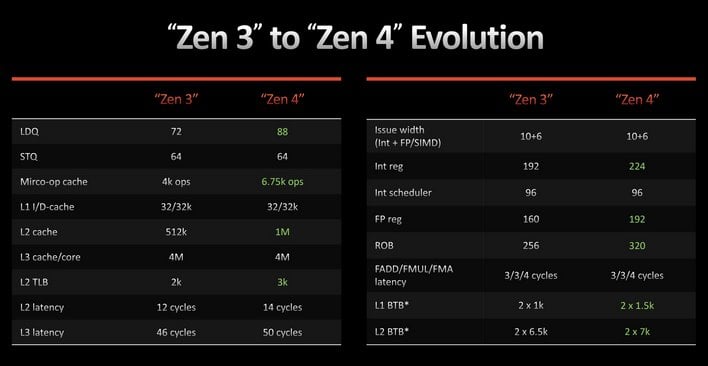 The first batch of Ryzen 7000 series processors going on sale tomorrow will have a TDP of 170 Watts, though socket power increases up to 230 watts to build some future scalability (and overclocking headroom) into the platform. However, the overall power story with Zen 4 is complicated, as a roughly 50% reduction in idle power and the integration of many mobile-first power-savings technologies were incorporated into the architecture and platform, but high-end system configurations actually pull more power from the outlet—more on that a little later. On a related note, despite the smaller dies resulting in higher thermal density and the smaller / lower-mass integrated heat spreader design on Ryzen 7000 series processors versus their predecessors, AMD claims thermals are improved under many circumstances. This too, however, is complicated because the processors are designed to shoot up to a maximum 95°C TJMax to take advantage of any available thermal headroom and maximize performance. 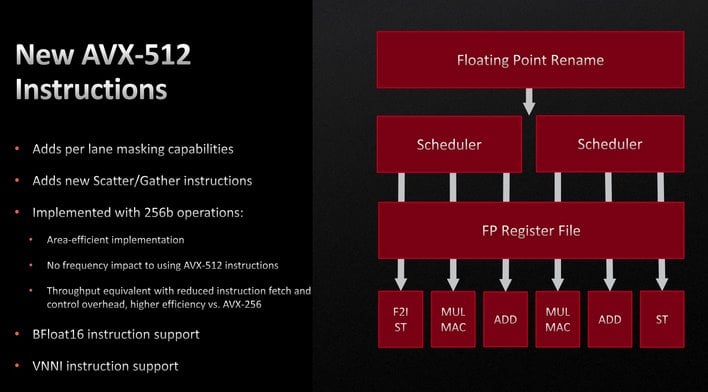 The Zen 4 architecture also incorporates support for AVX-512. In Zen 4, however, AVX-512 is implemented using double-pumped 256-bit data chunks unlike Intel’s latest architectures. This design decision was reportedly made to avoid large frequency fluctuations when executing AVX-512 workloads. In terms of performance, AMD is claiming a 1.3x improvement in FP32 inferencing workloads versus Zen 3, and up to a 2.5X improvements for Int8. 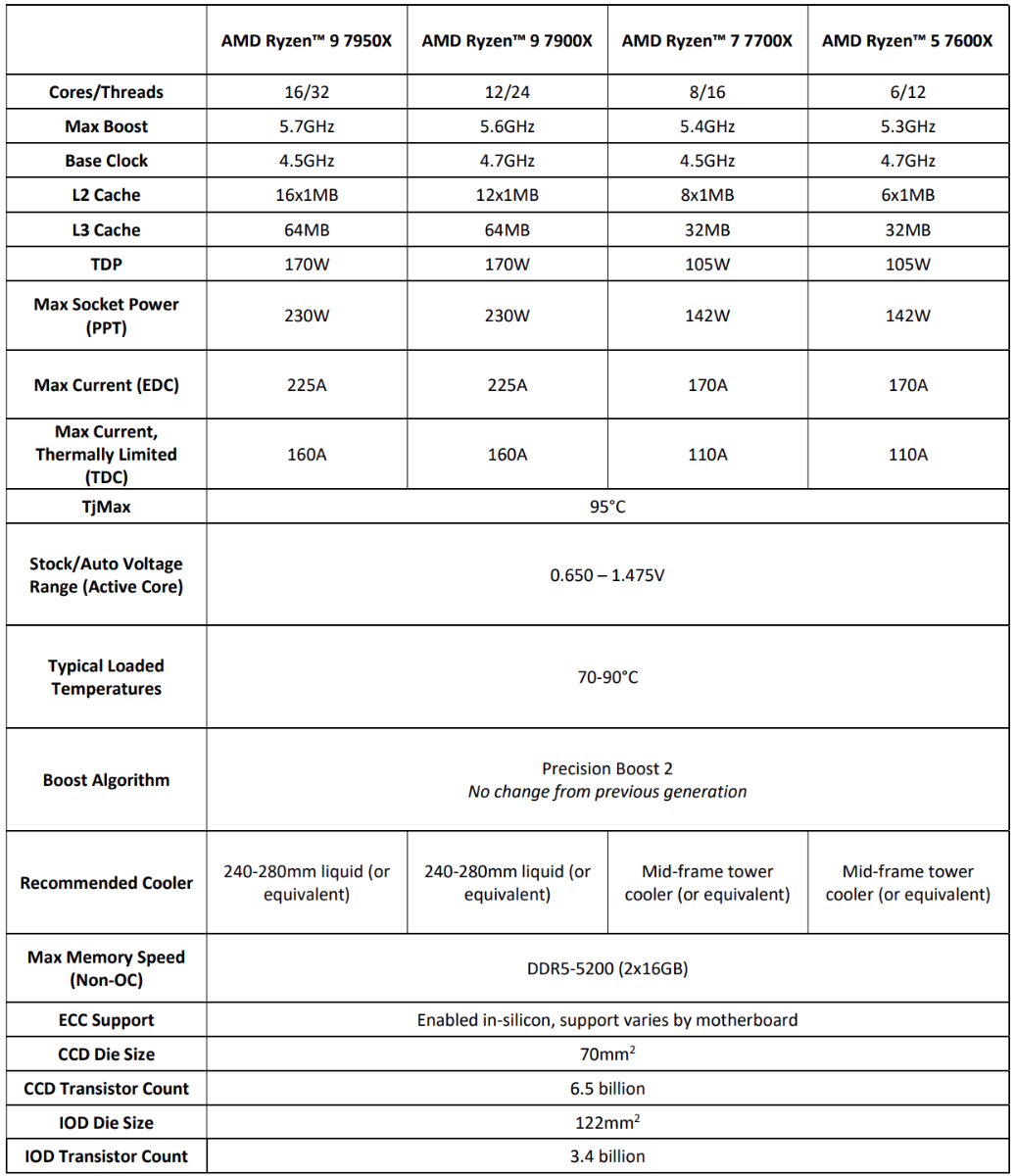 Base and boost clocks also differ between the processors and are increased significantly over the previous-gen Ryzen 5000 series. For example, a Ryzen 9 7950X will offer a 5.7GHz boost clock, which is a full 800MHz higher than any Ryzen 5000 series part. Cache sizes also differ between the various Ryzen 7000 series processors, with the flagship 7950X offering up to 80MB of combined L2+L3 cache, with the mainstream Ryzen 5 7600X clocking in at 38MB. 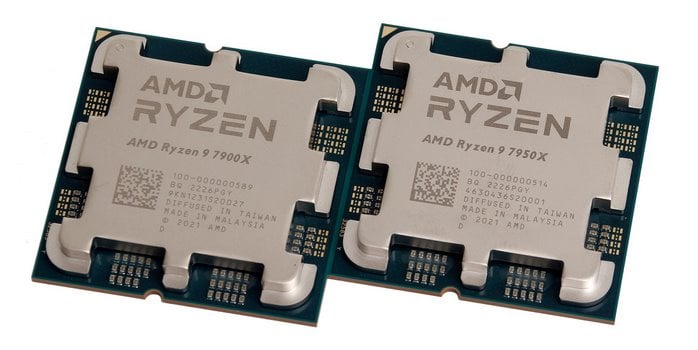 At this point, we're sure most of you have seen the new packaging of AMD's Ryzen 7000 series processors. As mentioned, these new CPUs ditch the 1,334 pins and PGA design of previous-gen Ryzen processors in favor of an LGA design with 1,718 pads. The heat spreader design is also radically different, with cutouts for the surface-mounted components on the top of the processor package, but the overall setup remains compatible with cooling hardware designed for older socket AM4 Ryzen processors. 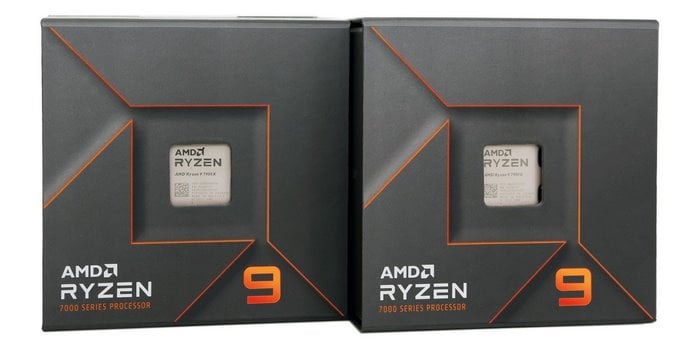 The Ryzen 7000 series retail box has been redesigned as well. AMD's Ryzen 9 processors we'll be looking at here shipped in carboard boxes that are about the same size as the previous-gen Ryzen 5000 series boxes. The boxes for the Ryzen 7 and Ryzen 5, however, are much slimmer—they're about half as thick as these boxes. 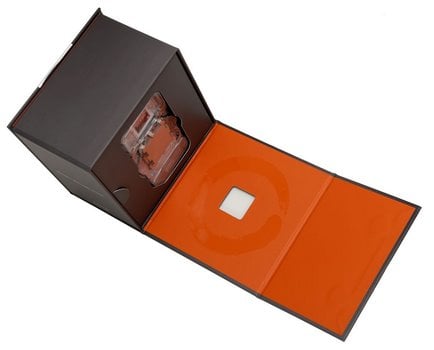 Opening the box is a somewhat new experience as well. Slice through the label at the top, lift up the lid, and the whole front of the box rolls out to reveal the plastic holster which houses the actual processor and all-important Ryzen 9 decal. Inside the box, users will find a small lit pack with warranty and setup information, but no cooler. None of the Ryzen 7000 series processors will include a heatsink in the retail box. 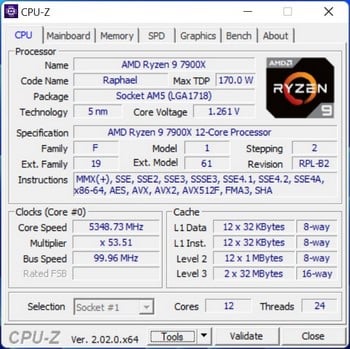 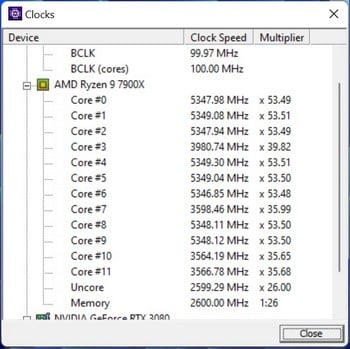 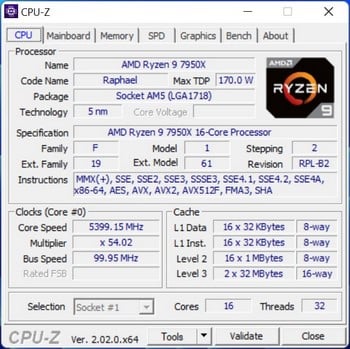 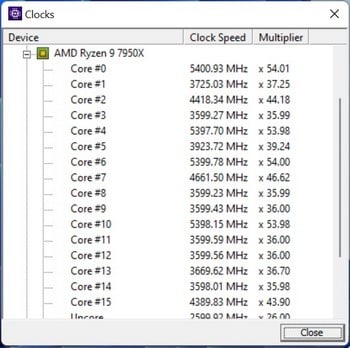