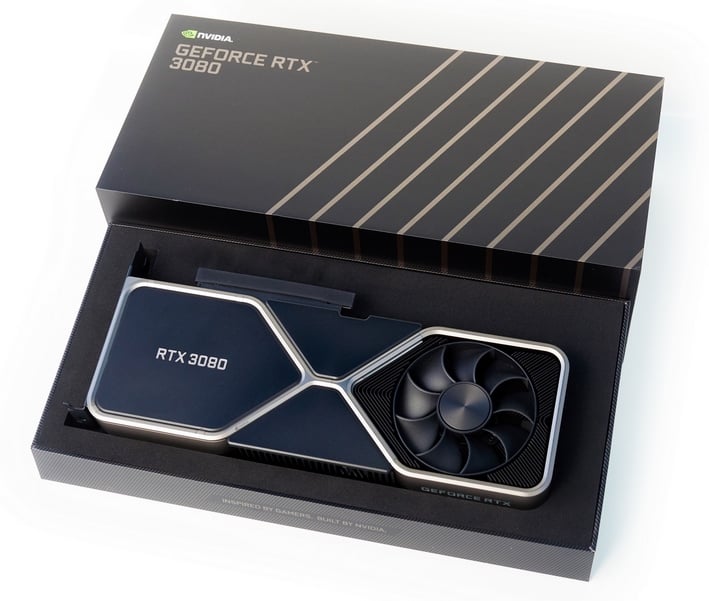 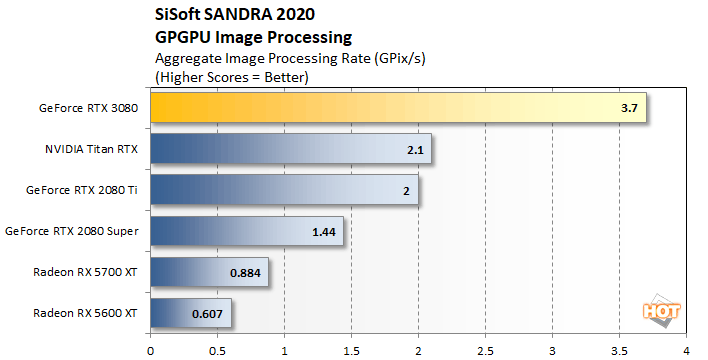 The Ampere-based GeForce RTX 3080 absolutely crushes every other card we tested here. It offers approximately 2.6X the performance of a GeForce RTX 2080 Super and outpaces the mighty Titan RTX by about 76%. 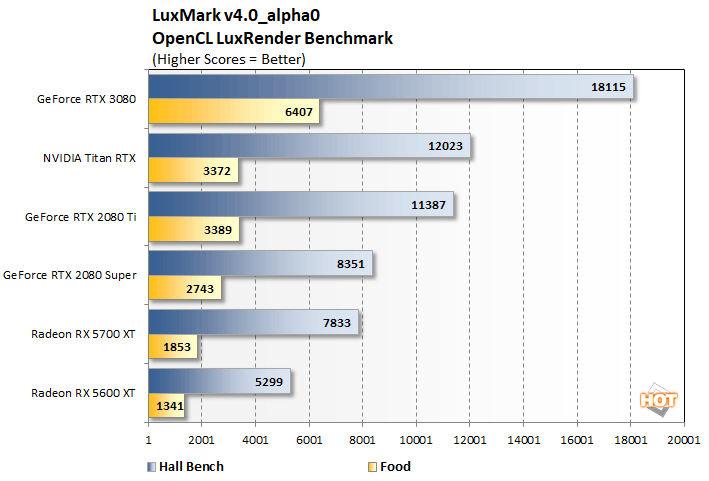 Once again we see the GeForce RTX 3080 significantly outpacing all of the other cards. NVIDIA's GeForce RTX 3080 more than doubles the performance of the RTX 2080 Super and leaves the Titan RTX in its wake. The Radeons finish way behind and land at the bottom of the charts. 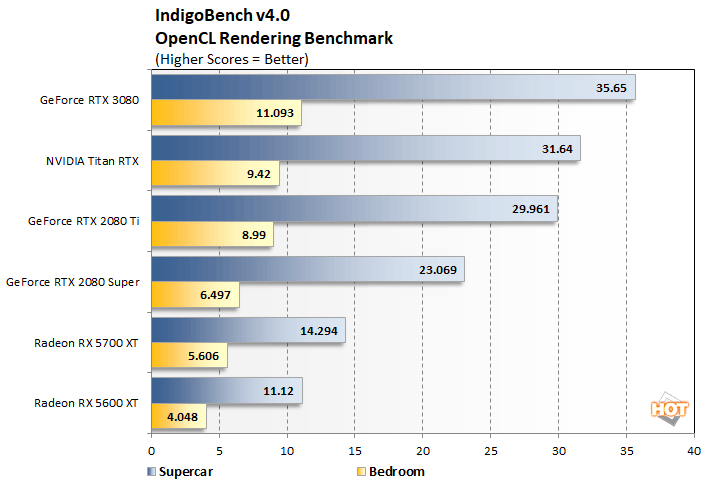 The deltas separating the GeForce RTX 3080 from the other cards are smaller in IndigoBench, but the card still manages to blow past the Titan RTX and more than double the performance of AMD's current flagship Radeon GPU.
Superposition is a relatively new benchmark from Unigine, powered by the UNIGINE 2 Engine. It offers an array of benchmark modes, targeting gaming workloads as well as VR, with both DirectX and OpenGL code paths. There is an extreme hardware stability test built-in as well. Unigine Superposition uses the developer’s unique SSRTGI (Screen-Space Ray-Traced Global Illumination) dynamic lighting technology, along with high quality textures and models, to produce some stunning visuals. We ran Superposition in two modes using the DirectX code path – 1080p Extreme and VR Future -- to compare the performance of all of the graphics cards featured here. 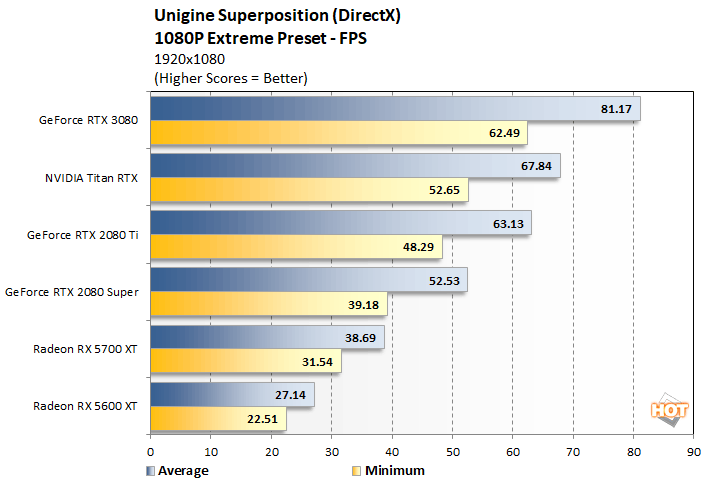 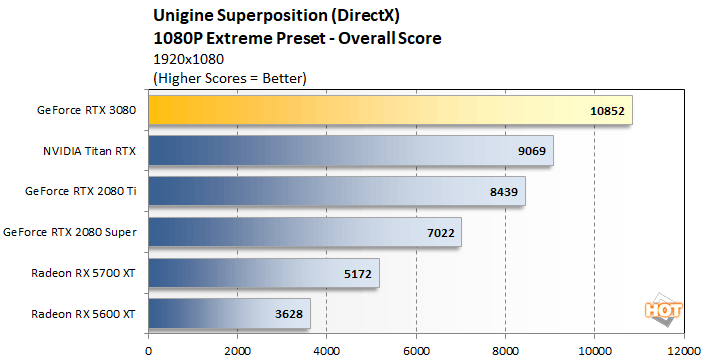 Unigine Superposition's 1080P Extreme test puts the Ampere-based GeForce RTX 3080 more than 54% ahead of the GeForce RTX 2080 Super, and well out in front of the RTX 2080 Ti or Titan RTX. Again, AMD's fastest Radeon offers less than the half the performance here. 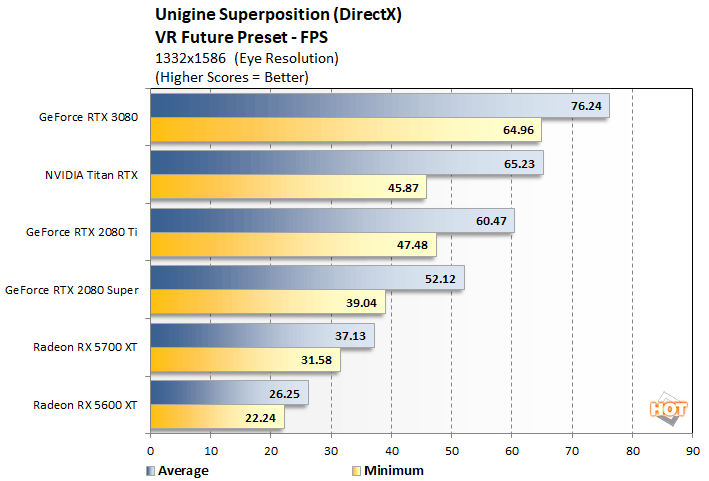 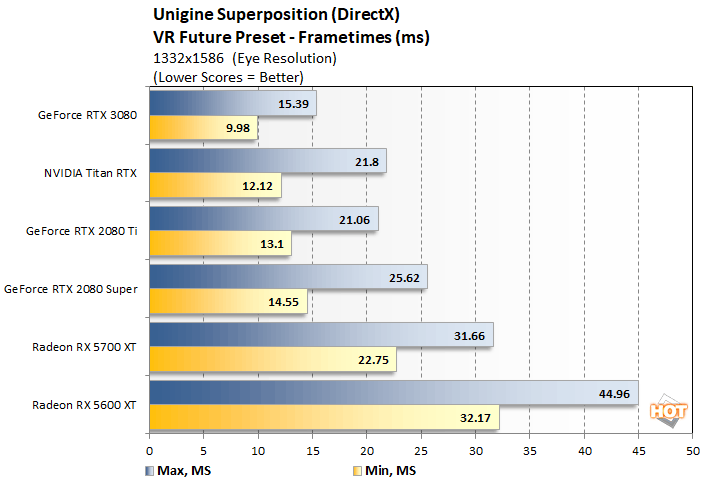 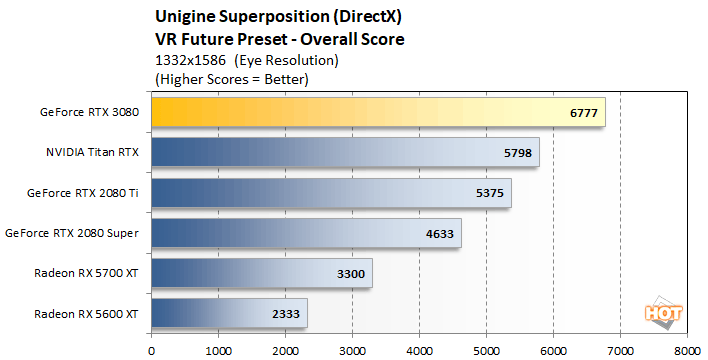 Superposition's VR Future test tells essentially the same story -- the GeForce RTX 3080 can't be touched by any current-generation GPU. Nothing from AMD comes close and the powerful Titan RTX lags behind by nearly 18%.
UL's VRMark is designed to test a PC’s readiness for the HTC Vive and Oculus Rift virtual reality headsets. The benchmark does not, however, require that one of the headsets is attached to the PC to run and it uses an in-house graphics engine and content to ensure comparable results between different platforms. We ran the "Blue Room" VRMark test at defaults settings here, which is currently the most taxing test offered by the tool. 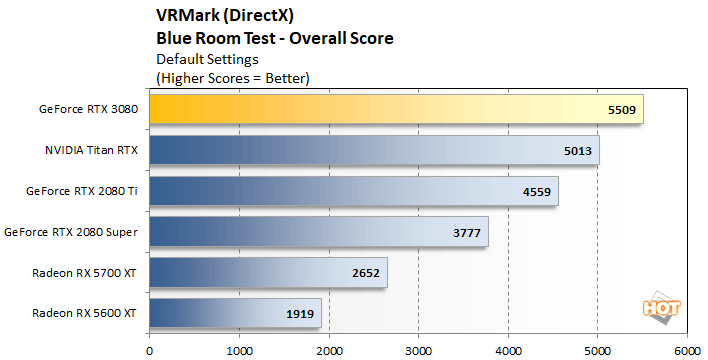 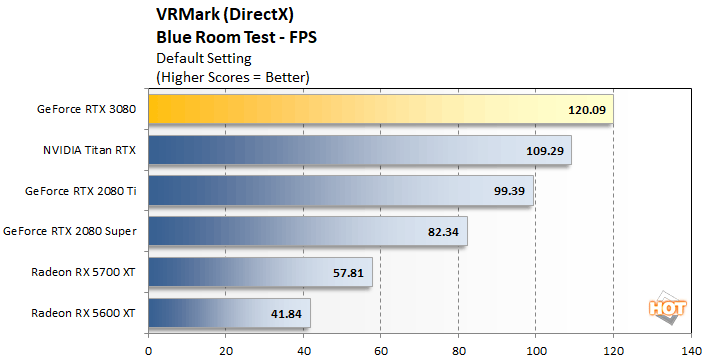 In VR Mark, once again, we find the new GeForce RTX 3080 leading the pack by a significant margin, outrunning the GeForce RTX 2080 Super by approximately 50% and more than doubling the performance of the Navi-based Radeon RX 5700 XT. 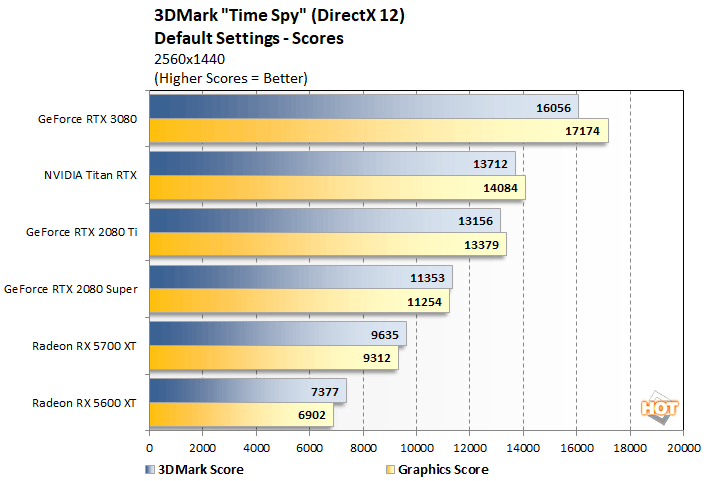 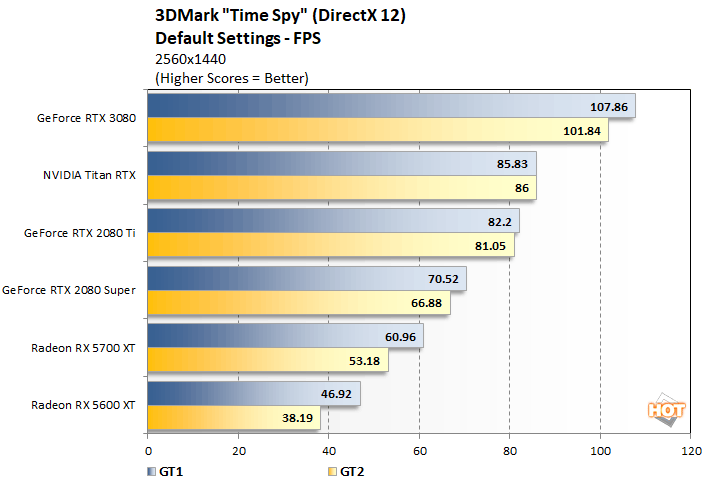 In the DX12-based 3DMark Tme Spy benchmark, the Ampere-powered GeForce RTX 3080 clearly leads the pack once again, blowing past the Titan RTX to finish well out in front of every other card we tested.
3DMark Fire Strike has multiple benchmark modes: Normal mode runs at 1920x1080, Extreme mode targets 2560x1440, and Ultra mode runs at a 4K resolution. GPU target frame buffer utilization for normal mode is 1GB and the benchmark uses tessellation, ambient occlusion, volume illumination, and a medium-quality depth of field filter. The more taxing Extreme mode targets 1.5GB of frame buffer memory and increases detail levels across the board. Ultra mode is explicitly designed for high-end and CrossFire / SLI systems and cranks up the quality even further. GT 1 focuses on geometry and illumination, with over 100 shadow casting spot lights, 140 non-shadow casting point lights, and 3.9 million vertices calculated for tessellation per frame. GT2 emphasizes particles and GPU simulations. 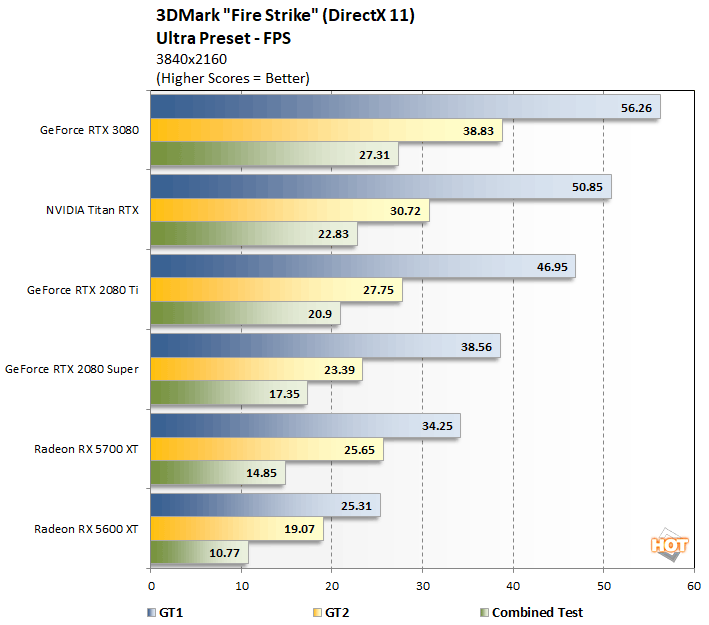 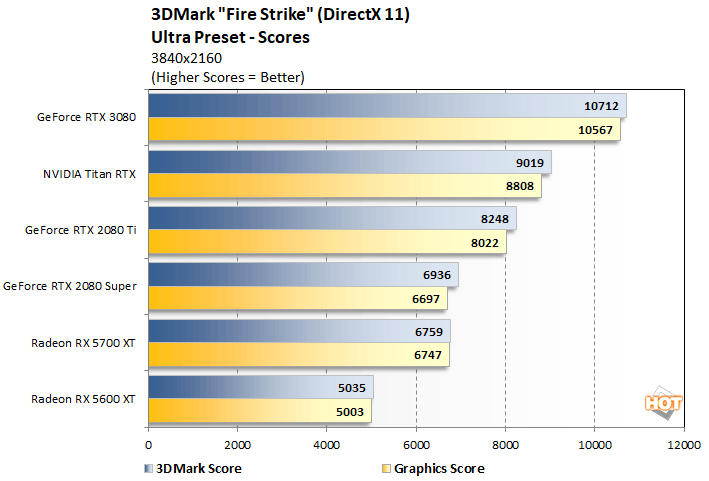 Our results in the DX11-based Fire Strike benchmark mirror what we saw in Time Spy. The GeForce RTX 3080 dominates the rest of the field, besting every other card by a wide margin.

Port Royal was released earlier this year as an update to UL’s popular 3DMark suite. It is designed to test real-time ray tracing performance of graphics cards that support Microsoft DirectX Raytracing, or DXR. Although DXR is technically compatible with all DX12-class GPUs, the graphics card must have drivers that enable DXR, and NVIDIA is the only company to have done so at this point, hence the lack of Radeons in the chart. 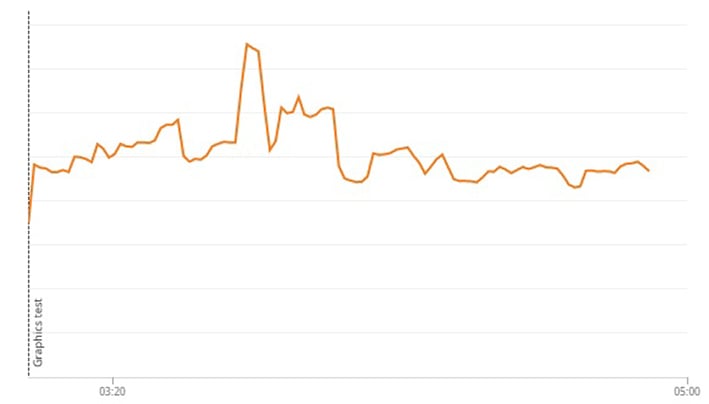