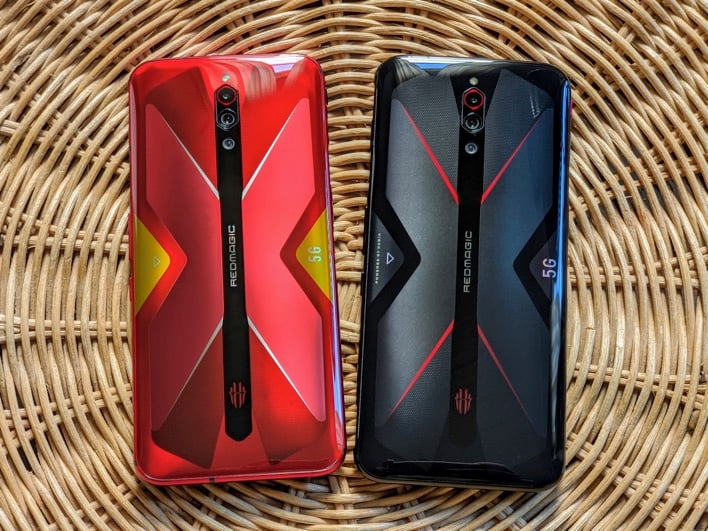 For better or for worse, gaming phones are a thing. What started out as a trickle of pricey, specialized handsets from established gaming brands like Razer and Asus ROG has turned into a steady stream of affordable, tricked out smartphones from Chinese sub-brands like Xiaomi’s Black Shark and Nubia’s RedMagic. Which brings us to today’s review of the Snapdragon 865-equipped RedMagic 5G ($579) -- a 5G handset that undercuts the OnePlus 8 ($699) yet offers similar features and a blazing fast 144Hz AMOLED display.

If you’re not familiar with Nubia, it started out as a sub-brand of Chinese giant ZTE, but became an independent business in 2015. Since then, it’s been making some interesting phones -- like last year’s dual-screen Z20 flagship. But these days, Nubia is best known for its RedMagic gaming handsets, and the RedMagic 5G is the fifth model the company’s launched in just two years. Like its predecessors, it’s officially available in the US and is priced aggressively. And once again, you’re basically getting flagship specs with an over-the-top paint job.

Looking past the questionable gaming aesthetics, it’s clear these devices are legitimately performance focused. While the RedMagic 5G surely packs serious gaming chops, how does it fare as a phone? Have any corners been cut? Are these compromises worth it? More importantly, should you buy this handset? Read on and find out...

Like their gaming laptop brethren, gaming phones are a bit of an acquired taste. A lot of this comes down to design and CMF (color, material, and finish). Gaming laptops are typically big and angular, mostly black with colorful accents, peppered with lights, and made of hard, cold materials. Most of these attributes carry over to gaming phones. Big? Check. Angular? Less so, since that’s not comfortable in pockets. Black with colorful accents? Sometimes it’s the other way around. Blinkenlights? Check. Hard, cold materials? Glass and aluminum fit the bill. 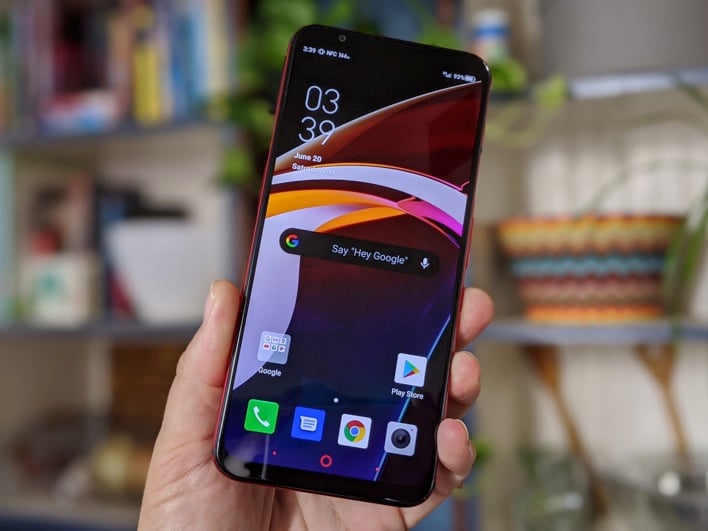 Nubia sent us two RedMagic 5G review units -- an Eclipse Black European pre-production model, and a Hot Rod Red US retail device. There’s also a striking red and blue hue called Pulse. All three are glass and aluminum sandwiches, unlike previous RedMagic models, which were unibody aluminum with a glass front. This means the back panel is less sculpted and more slippery, but also less baroque. Other than a few subtle red accents, the black RedMagic 5G easily passes for a standard modern handset.

The red version is a different story. First, it’s bright red with a black racing stripe along the middle. Second, it boasts large gold triangular accents and a giant letter X outlined in various shades of red. The triangles and letter X are also present on the black model, but hide behind shades of black. Third, the antenna bands and triggers buttons on the red model’s aluminum frame are black and really stand out. In all, the Eclipse Black version blends in, and the Hot Rod Red and Pulse devices scream “we’re gaming phones!”. 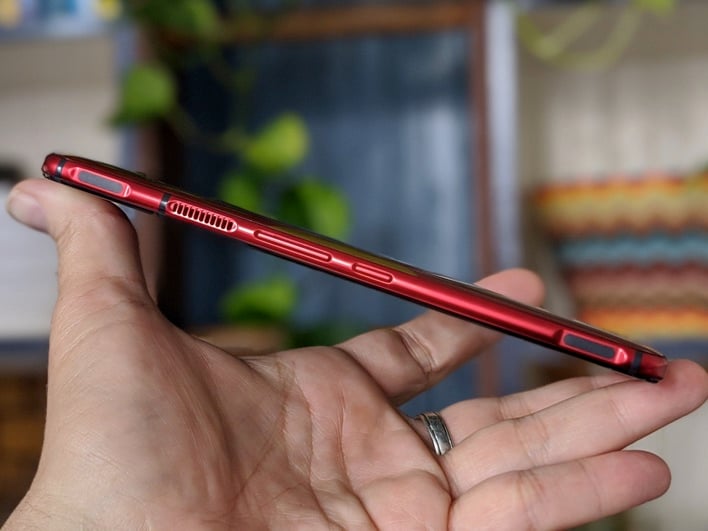 At 168.6 x 78 x 9.8mm and 218g, the RedMagic 5G is a big and heavy phone. It’s slightly larger and about the same weight as Samsung’s Galaxy S20 Ultra (166.9 x 76 x 8.8 m, 222g), despite having a smaller 6.65-inch screen (vs. 6.9-inch). Main reason: the RedMagic 5G has noticeable top and bottom bezels. The top bezel is home to the 8MP selfie camera, the earpiece, and a bonafide notification LED -- something that’s all but gone from most handsets today. As such, the screen has no notch or punch hole to interrupt your gaming pleasure. 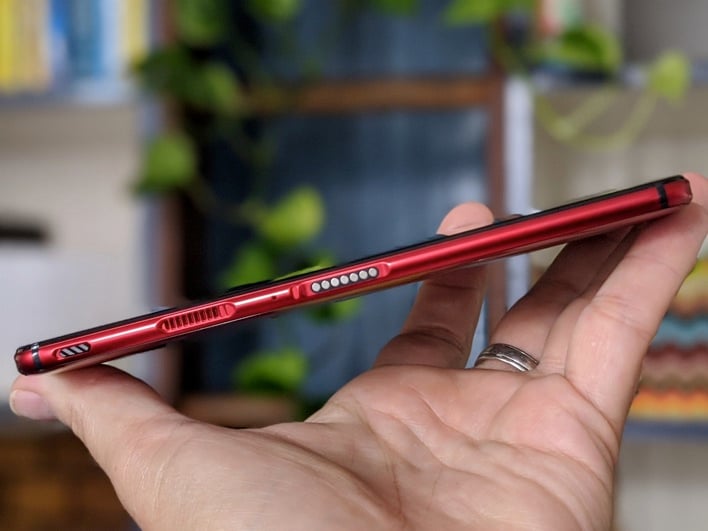 In back, the aforementioned black racing stripe -- which is less obvious on the black model -- is where you’ll find the LED flash, rear shooters (64MP main, 8MP ultrawide, and 2MP macro), RedMagic RGB LED strip, and RedMagic red LED logo. See, we found the gaming lights! Unfortunately, the words “5G” and “Powered by Nubia” are also plastered in silver on the back panel, lest we forget. Under that rear glass lives a 16,000rpm fan (!), a 4500mAh battery, and the NFC antenna (a first for RedMagic), but no wireless charging coil.

Around the edges is where things really deviate from your typical phone. Starting at the top, there’s a 3.5mm headphone jack and the secondary mic. So far so good. On the right side are two capacitive shoulder buttons, the fan exhaust, a volume rocker, and the power/lock key (which is mounted far too low). Along the bottom you’ll find a speaker, the USB Type-C port, the primary mic, and the SIM tray. The left side is home to a custom docking connector, the fan intake, a third mic, and the game mode switch. Phew! 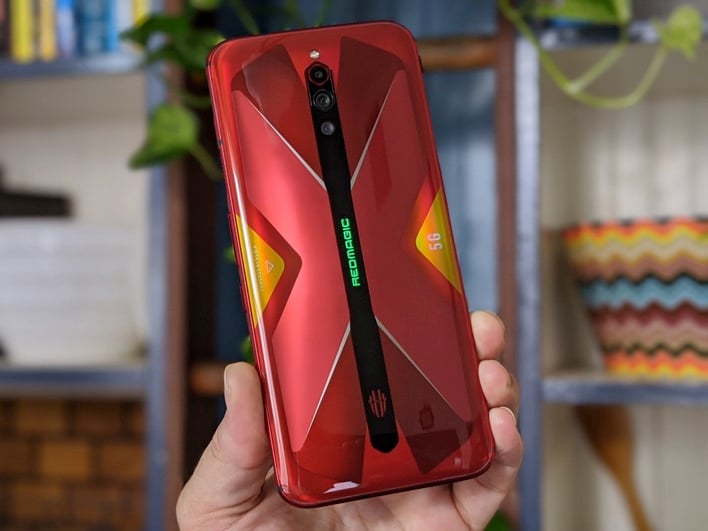 Needless to say, with a fan on board and intake and exhaust grilles along the edges, the RedMagic 5G isn’t water (or even dust) resistant. Don’t take it to the beach like we did, unless you use the old Ziploc bag trick, which we also did. And it survived just fine. [Don’t worry, we visited McLures’ beach on a weekday, wearing masks and doing social distancing. It was almost deserted - Ed.]

Take a quick guided tour here on video and then we'll dig into more specifics of this gaming-focused beast...

You’d expect a gaming phone to have a special display, and the RedMagic 5G delivers. It packs a gorgeous 6.65-inch FHD+ (2340 x 1080 pixels, 388ppi), AMOLED panel with a 144Hz refresh rate, plus 90Hz and 60Hz modes. This is a completely flat screen with a 19.5:9 aspect ratio, a 240Hz touch sampling rate, and an embedded optical fingerprint sensor. Our only nitpick is with the display corners, which have a very large curvature radius and often obstruct some content in games. At least this handset doesn’t have those dreaded curved “waterfall” edges. 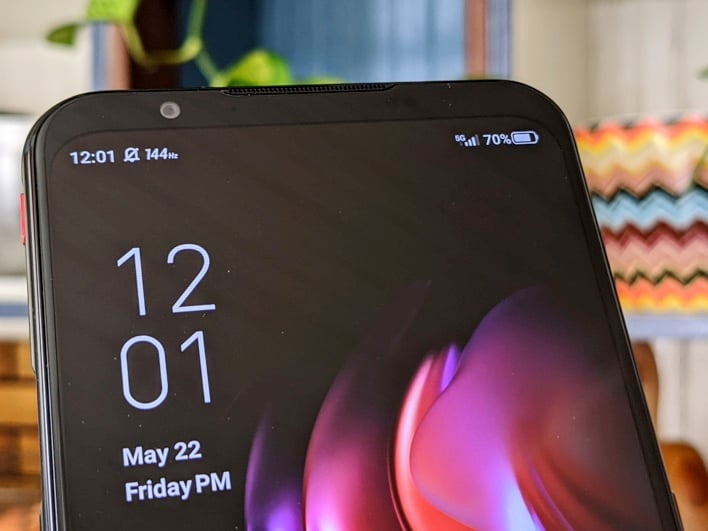 Since this is an AMOLED screen, colors are vibrant and blacks are deep. Viewing angles are excellent too, with very little off-axis color shift. At 600 nits, this isn’t the brightest panel on the block, but we didn’t have any problems using the phone in the bright California sunshine. Obviously, the star of the show here is the ultra smooth refresh rate, but honestly, it’s even harder to tell the difference between 120 and 144Hz than it is between 90 and 120Hz. While 144Hz might make sense for gaming, it’s overkill for anything else.