Back in late April 2019, the Nubia Red Magic 3 gaming smartphone launched with some pretty stout specifications -- for the time -- including a Snapdragon 855 SoC, up to 12GB of RAM, a large 5000 mAh battery and a 90Hz display. Now, ZTE is back with its 2020 edition gaming phone: the Nubia Red Magic 5G.

As you might expect from a flagship smartphone released in 2020, the Red Magic 5G is powered by Qualcomm's Snapdragon 865 SoC, which means that it also features the Snapdragon X55 5G modem (hence the "5G" in its name). There are a number of RAM configurations available including 8GB, 12GB, and a staggering 16GB (a spec that we've seen recently with the Samsung Galaxy S20 Ultra).

To keep the SoC and internal hardware cool during extended gaming sessions, it features a cooling fan that can spin at up to 15,000 RPM. Standard cooling fans aren't something that we're used to on smartphones, but the Red Magic 5G should be less prone to performance throttling with this setup. The Red Magic 5G is available with 128GB or 256GB storage options, while a 4,500 mAh battery is included (which supports 55W fast charging). 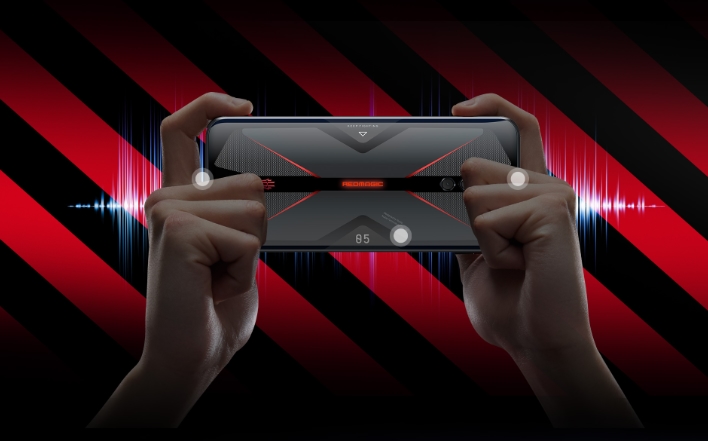 On the display front, the Red Magic 5G has a large 6.65-inch FHD+ AMOLED display (2340x1080) with a super-fast refresh rate of 144Hz. That's a big step up from the 90Hz refresh rate of its predecessor, and a step above the 120Hz panels found on other gaming phones and the Galaxy S20 family.

Other features of note include a 240Hz touch sampling rate, capacitive triggers with a touch sampling rate of 300MHz, and a triple-camera setup on the rear (64MP primary, 8MP ultra-wide, 2MP macro). The front-facing selfie camera uses an 8MP sensor.