The RedMagic 5G is Nubia’s first gaming phone with a trio of cameras in the back. It features a 64MP f/1.8 0.8-micron main shooter (without OIS), an 8MP f/2.2 1.12-micron 120-degree ultrawide, and a 2MP f/2.4 1.75-micron macro (without AF). Yes, it’s the same cheap macro that manufacturers are throwing into every mid-range handset and affordable flagship instead of a telephoto lately, just to retain triple camera bragging rights -- we’re definitely looking at you, OnePlus 8. We’d take OIS on that main shooter over this macro any day. 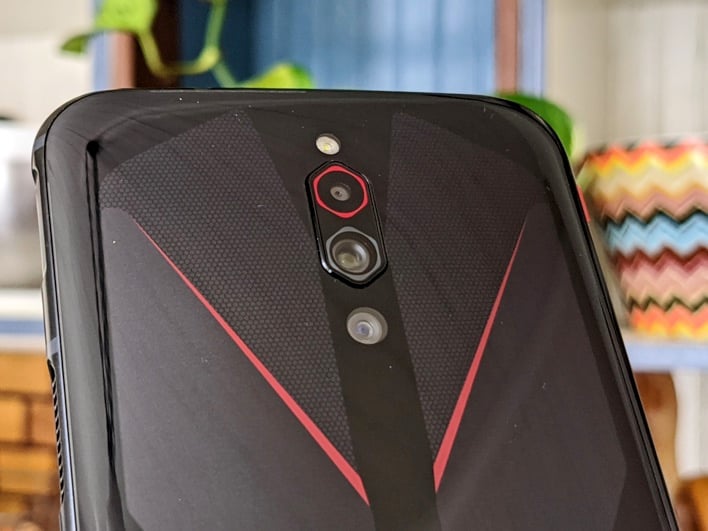 Still, there’s a shining star among those middling camera specs, and that’s Sony’s IMX 686 64MP Quad-Bayer sensor, which “bins” (combines) 4 pixels into one, outputting 16MP with 1.6-micron effective pixels for better low-light performance. Plus, having an ultrawide is always nice. Sadly, the RedMagic 5G’s native camera app and image processing leave a lot to be desired, with results to match. Of course, the workaround (at least partially) is to install one of the many Google Camera APKs available for non-Pixel phones.
In front, selfies are handled with an 8MP f/2.0 1.12-micron shooter. The RedMagic 5G supports video recording up to 8k 30fps (unstabilized) and 4k 60fps (stabilized) using the main shooter, and up 1080p 30fps (unstabilized) with the selfie camera. It also captures slow motion video at up to 960fps (1080p) and -- given enough light -- even 1920fps (720p). As for the audio, it’s mono only, which is disappointing for a handset with flagship specs. We understand this is a gaming phone, but imaging is a critical pillar for any modern handset.

As you can see from our samples, photos taken with the RedMagic 5G -- while not terrible -- are far from spectacular. Most of this comes down to poor image processing. Despite Sony’s very capable IMX 686, the main shooter exhibits exposure and HDR issues, color and white balance problems, excessive sharpening, and a general lack of detail. Ditto the ultrawide and selfie cameras. Zoomed-in shots look like simple 16MP crops, instead of 64MP images processed using sub-pixel interpolation and other “smart” zoom techniques.
The macro is very difficult to use since it lacks AF, and the resulting shots look exactly like what you’d expect from a 2-megapixel fixed-focus camera with a smaller aperture: underwhelming. Video recording is fine, but stabilization isn’t the best. Making matters worse, the RedMagic 5G’s native camera app is disorganized. For example, the ultrawide is only available in pro mode, while the macro is buried in the “Camera Family” menu, alongside panorama, slow motion, and time lapse. Basically, it’s not a pleasant experience.

As we already mentioned, you can fix most of these shortcomings by installing an unofficial Google Camera APK. While it only supports the main shooter and selfie camera, it significantly improves image quality and video stabilization. Still, it’s annoying you have to jump through hoops because Nubia didn’t care about imaging performance, and some things -- like the lack of OIS -- can't be fixed in software.