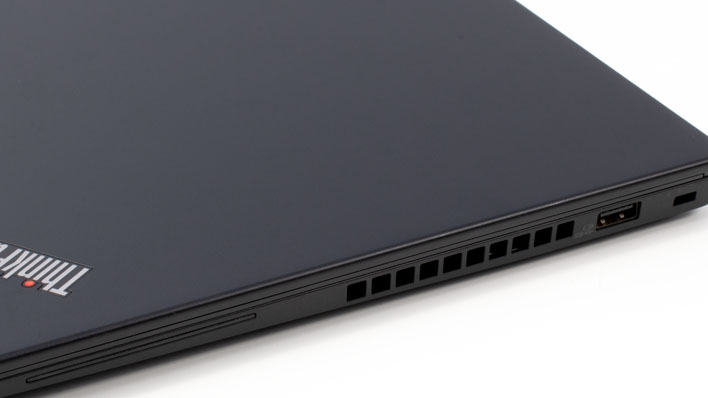 Thanks to the Ryzen 5 PRO 4560U CPU's relatively low 15W TDP, we'll be doing apples-to-apples comparisons against Intel's flagship 10th-generation Core i7 CPUs that have similar thermal constraints and core counts. Whatever we see here, remember that the ThinkPad X13 Gen 1 has a Ryzen 7 PRO 4750U eight-core processor option, too, so we haven't even hit the ceiling of what this system can do for buyers with a higher budget. 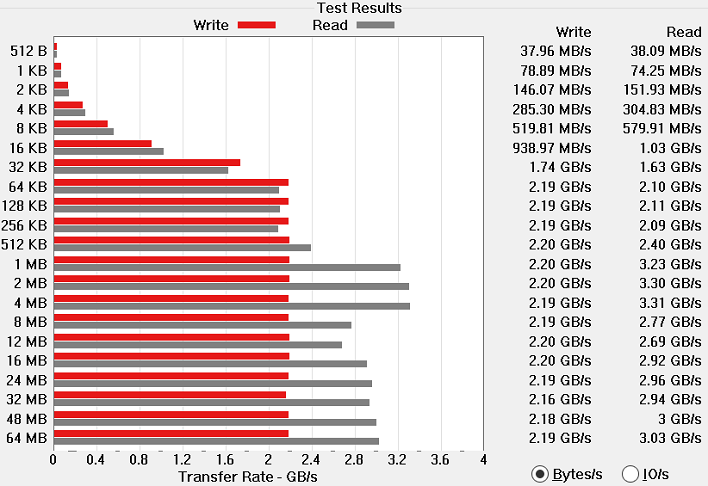 The ThinkPad X13 has a 256 GB Samsung PM981a, which is a PCI Express 3.0 NVMe drive in the typical M.2 2280 form factor. We didn't expect a ton of performance out of a relatively small drive, but the ThinkPad X13 surprised us and we saw read speeds that could reach north of 3 GB per second. Write speeds weren't too far behind, either, and 2 GB per second on large sequential writes is pretty solid.

From an I/O standpoint, the drive performs more than adequately here, hitting right around 80,000 I/O operations per second on small reads and writes. That number drops predictably, since there's more writing or reading to each operation as sizes increase. Overall the storage subsystem is solid, and users will not likely ever be waiting on the SSD to get much done. 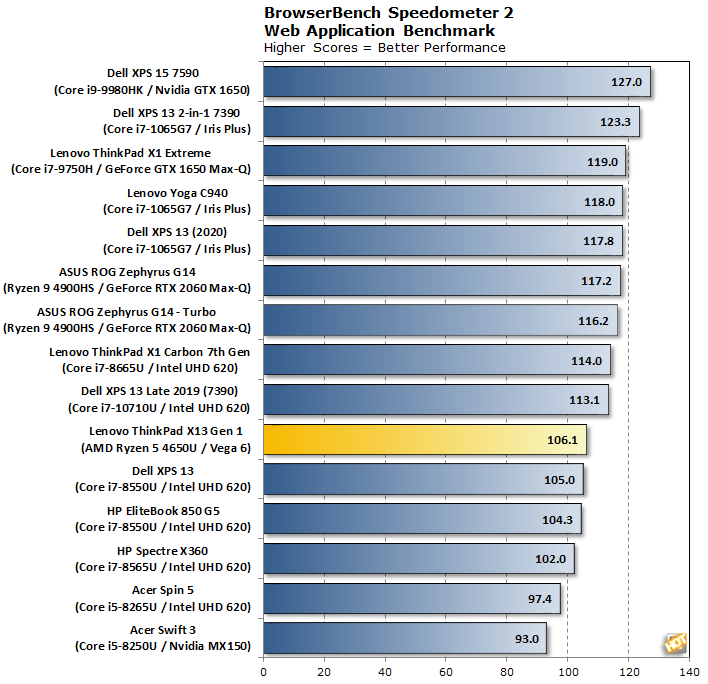 It's easy to look at this as the ThinkPad X13 Gen 1 getting off to a rocky start in our real-world application tests, but the reality is that once you hit 100 runs per minute, we're looking at a pretty solid result. While it's certainly not quite as fast as the newest ultraportable systems in our data set, it only trails Ice Lake-based Dell systems and Lenovo's own Yoga C940 by a small margin. Everything else on this chart is a system with a bigger thermal budget that can push the turbo clocks a bit higher. 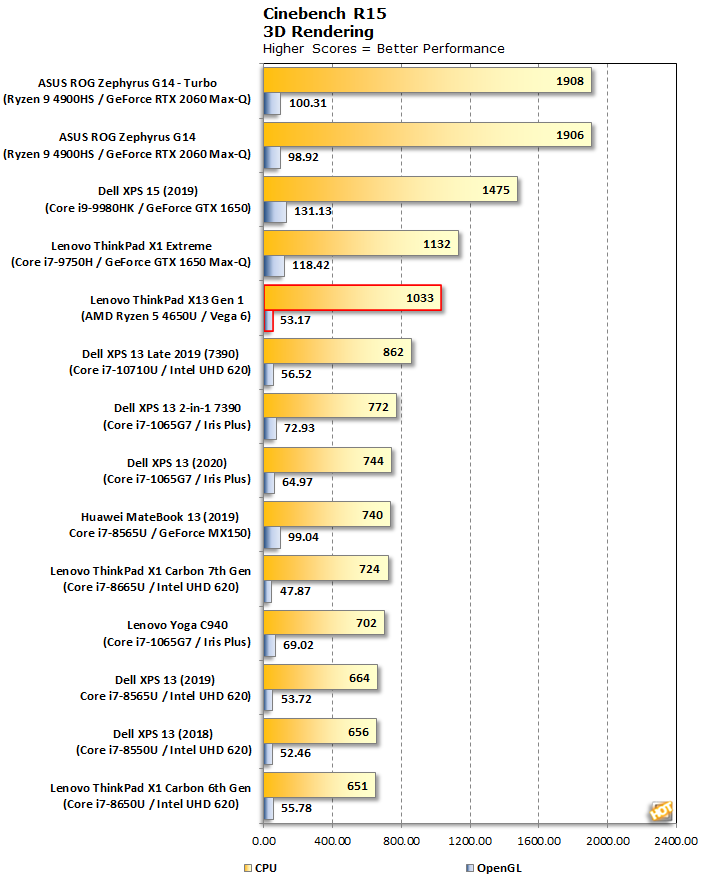 The Ryzen 5 PRO 4650 CPU is faster than a Core i7-10710U in this test. That's all there is to it. As a result, Lenovo's ThinkPad X13 is by far the fastest ultraportable at Cinebench R15 -- the systems above it in the chart are not what we'd consider ultraportables. This isn't exactly the kind of workload we'd expect out of a thin and light notebook, but this does show us that the system has plenty of multi-processing horsepower when it's necessary. In fact, this Lenovo system only trails the larger ThinkPad X1 Extreme by around 9%.

On the OpenGL test, the Radeon scores about like every other integrated option here. That's not really what we expected from the Radeon Vega 6, but at this point Cinebench's OpenGL test is pretty long in the tooth, and it's unlikely that there are many optimizations outside of professional-grade drivers like AMD's WX series. 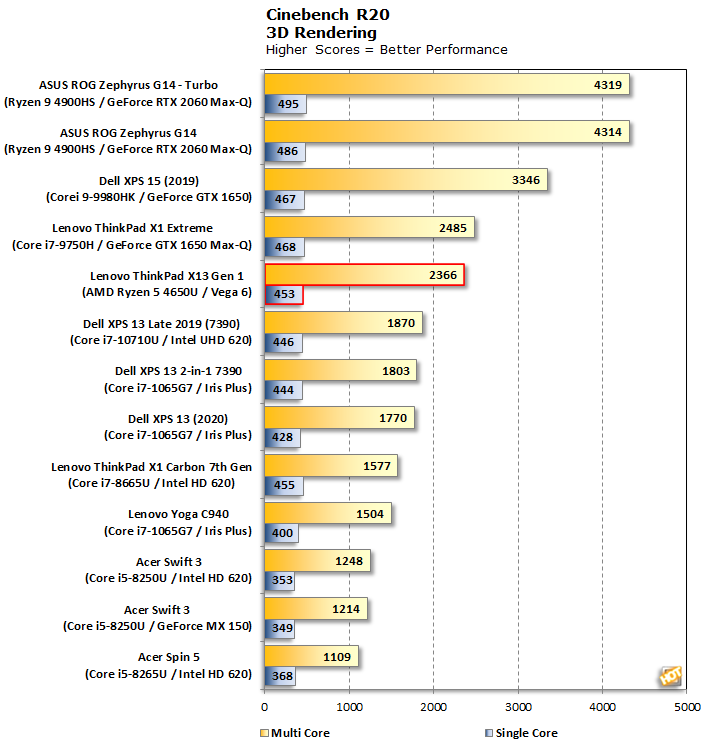 In this CPU-intensive test, the ThinkPad X13 is once again the fastest ultraportable in the list. And because this test takes a while, we think that this will translate to plenty of thermal headroom for the typical kind of burst-focused tasks that users will put these systems through. Once again, it takes a much higher thermal budget for Intel's best to topple AMD's mid-range CPU. 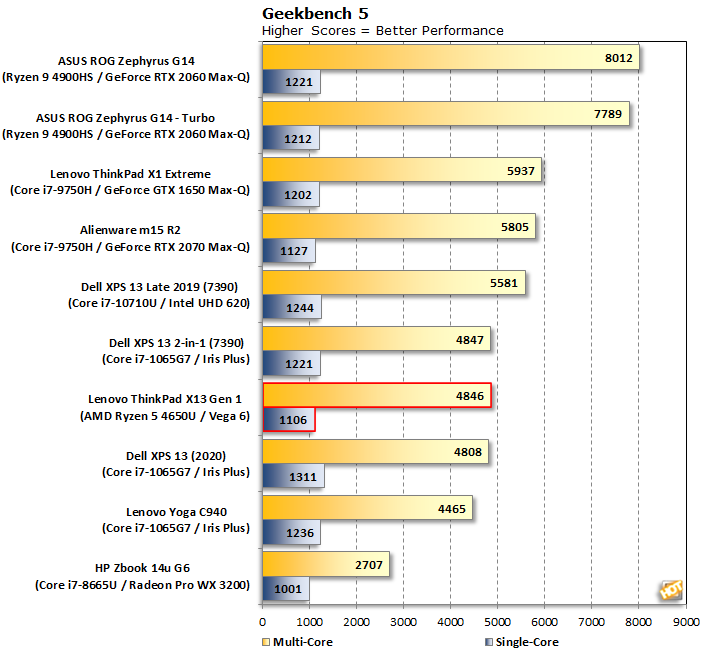 Geekbench is pretty synthetic in nature, but its tests do have real-world applications. Everything from simulated web browsing to music playback and even augmented reality is the focus here. Based on our Cinebench results, we were a little surprised to see the Ryzen 5 PRO 4650U only catch up to the four-core Core i7-1065G7 in Dell's XPS 13. Intel's latest architecture has a significant single-threaded performance advantage, and that translates into the AMD CPU's extra cores playing catch-up in the multi-threaded test. Still, this is pretty impressive: the ThinkPad X13 as configured is quite a bit cheaper than the XPS 13 we're comparing against, and they have similar dimensions and weight. 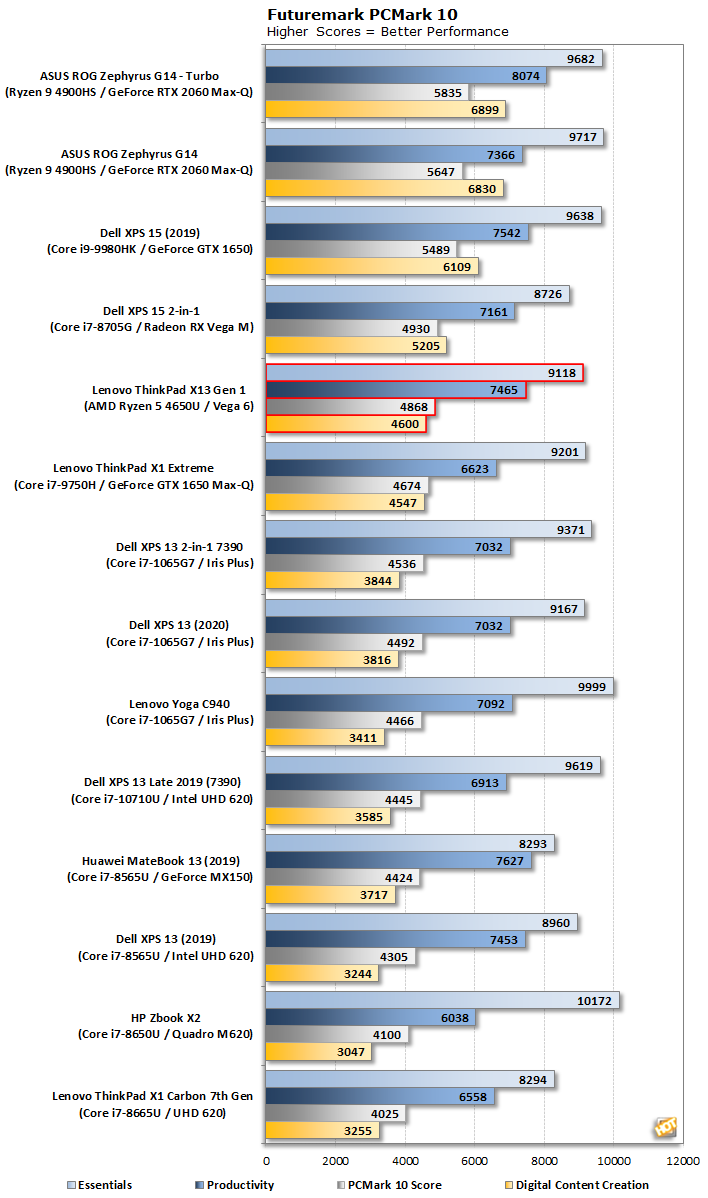 Once again, the ThinkPad X13 is the fastest ultraportable notebook in our group. This system dominates the productivity category in particular, which focuses on office applications like word processing and spreadsheets. It also does a really great job in the Digital Content Creation tests, which included 3D rendering, photo manipulation, and video editing. There's no real stumbling block in any of the tests for the ThinkPad, as the Essentials test result lands in the upper-third of all ultraportable systems on display here. PCMark 10 seems to think that the ThinkPad X13 is a pretty well-rounded system.

While gaming isn't the focus of a thin and light system like this, it's worth looking at how the integrated Radeon GPU performs. After all, road warriors banished to a hotel room probably need something to do in their down time, so if it can handle a bit of light gaming, so much the better. 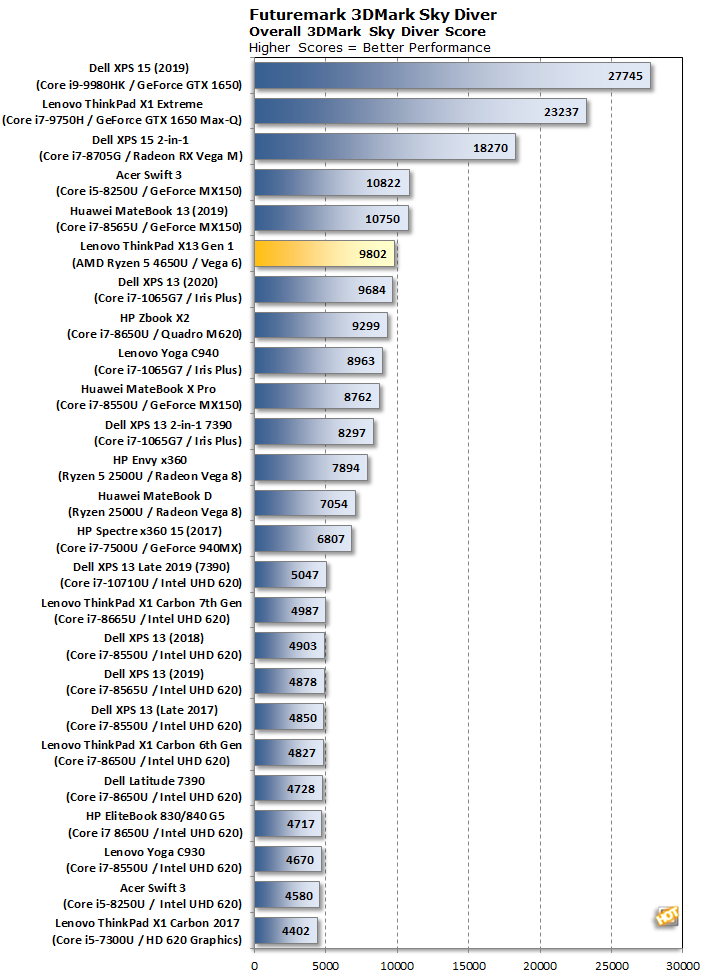 The ThinkPad X13's integrated Radeon GPU absolutely thumps the older UHD 620 GPU found in even the current 10th-gen Core i7-10710U. The only systems that could touch it are the ones with Ice Lake-based Iris Plus graphics. Doubling up the score on the late 2019 XPS 13 is pretty impressive. This should bode well for gamers playing older DX11 titles, since this test isn't using the latest in graphics APIs. 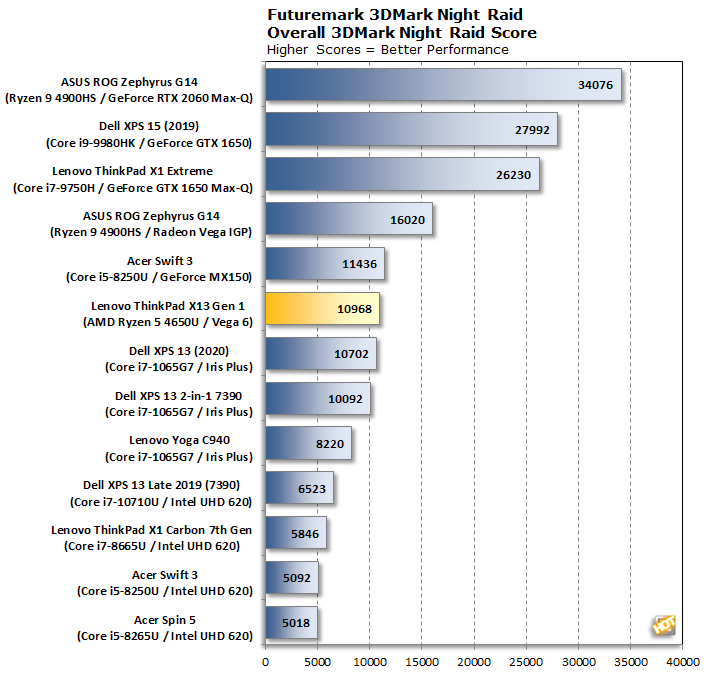 This test is quite a bit newer, so there aren't as many results. There's still the same trend, though: the integrated Radeon graphics in the ThinkPad X13 are much faster than Intel's last-gen GPUs. The current Iris Plus does much better, but still can't quite overtake AMD in this DX12 test. 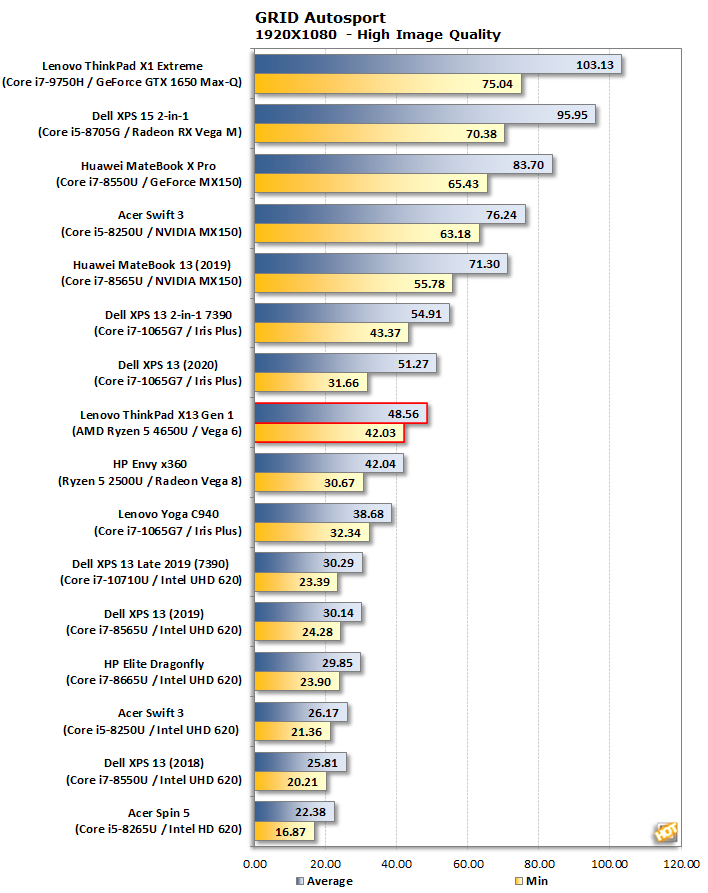 1080p and High details on GRID Autosport is well within the reach of the ThinkPad X13. Here we see some Intel-based systems actually take the lead, if only by a small margin. Nothing from the Intel camp can touch the AMD system's minimum frame rate of 42 fps, though, and that means the AMD system feels a bit smoother than any of the Intel-based options.

We don't have a ton of comparative data in newer games because, honestly, most ultraportable notebooks struggle with GRID Autosport enough that it's not worth bothering. On the other hand, we learned in our recent reviews of the Dell G5 15 SE and Asus TUF Gaming A15 that the integrated GPU might have the chops to play some newer games at lower settings.

To sate our thirst for knowledge, we installed Gears 5 on the ThinkPad X13 and gave it a go on several settings. Finally we settled on 1366x768 and medium details because that gave us playable performance with settings that didn't make our eyes bleed. As it happens, that's the same native resolution as the ThinkPad X13's base model's built-in non-touch display. We'd never recommend such a low resolution on a display as Windows 10's scaling matures, but it was as good a start as any. 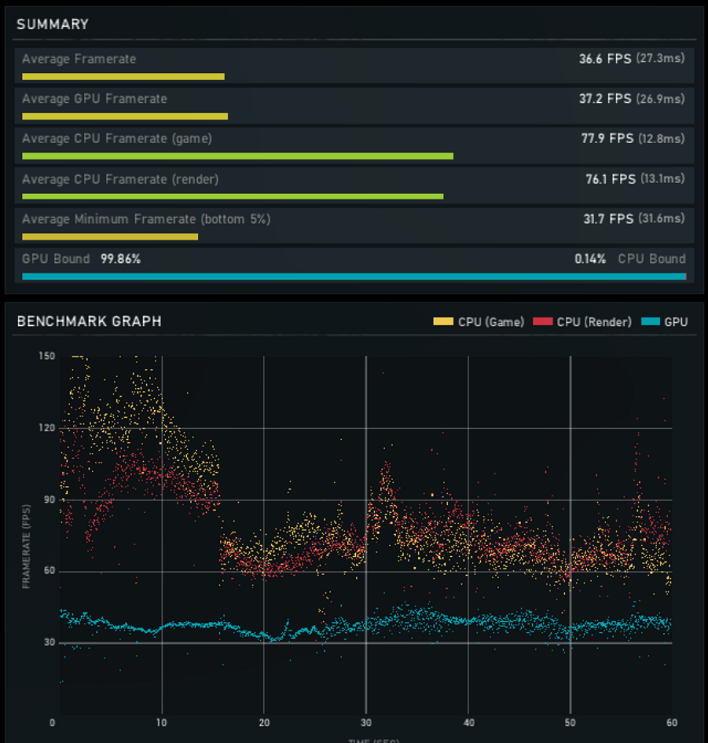 This is the chart produced by Gears 5 at the conclusion of a benchmark run. We can see that the ThinkPad X13 averaged well over 30fps throughout the run, and never dropped below 31 fps at all. That's definitely playable, and the game looked pretty decent, to boot. The blue dots indicate how high a frame rate the Radeon GPU could run the game. The red and yellow dots indicate different aspects of CPU performance, and as one might expect, the CPU was pretty bottlenecked. At least performance was acceptable. The system is definitely not a gaming laptop, but there's no harm in playing a bit if this is all that's on hand, either. On the scatter plot at the bottom we see color-coded frame times.

Next up we'll take a look at thermal and acoustic performance. This notebook has a familiar form factor but an unfamiliar CPU from AMD. Performance is high, but could Lenovo wrangle the CPU's thermal load without making our ears bleed? Let's find out.
PREV PAGE NEXT PAGE