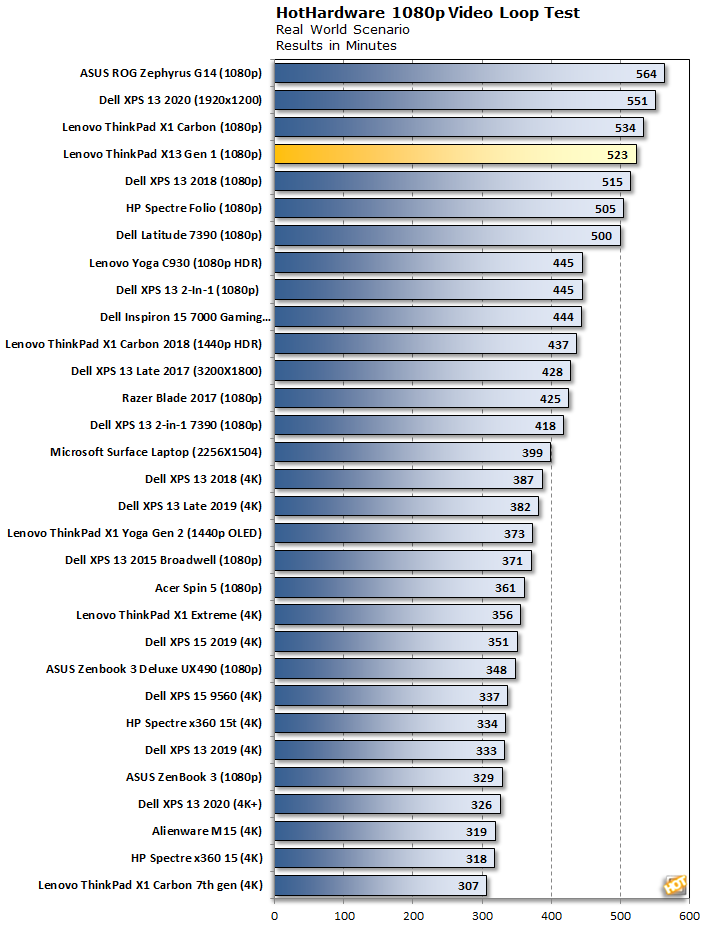 The result is exactly what we'd hoped for. AMD's 15W CPUs can not only hang with Intel's latest in terms of performance, they can also keep up on battery life. While the 48 Wh battery inside the ThinkPad X13 is a hair smaller than the 51 Wh pack in the XPS 13, the difference is small enough that it basically mirrors the time difference. Either way, we got over eight and a half hours of runtime in our battery test.

We've been reporting PCMark video playback results here recent. PCMark seems to have some issues with the latest version of Microsoft's TV and Videos app, though. PCMark can add its built-in video to the app's library, but playback fails and the test returns an error. If we can get that sorted quickly, we'll update this section with more data, but it seems like that's going to take an update from UL to make it happen. Since this app comes from the Windows store, there's no way to revert back to an older build. 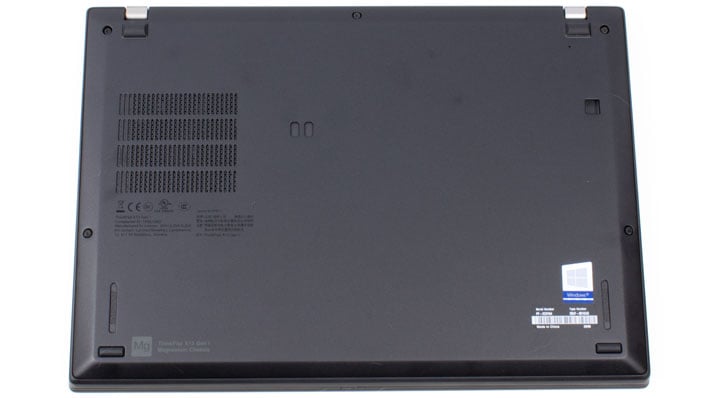 Getting into Lenovo's ThinkPad X13 is very simple. Five captive screws and a bit of light prying is all that separated us from inside the notebook. There's a plastic snap-in latch right in the center that made us think that maybe it hadn't been fully disassembled, but eventually it gave way. Several more latches along the front edge keep that side in place when it's assembled, and the lid pulled right off.

Finally we're into the ThinkPad X13. The cooling system isn't exactly robust, but it doesn't need to be. There's a wide heat pipe that travels from the CPU to a fin array, and a blower-style fan that pushes hot air out the right side of the system. Replacing the cooler means removing the screws that flank the CPU and two others that hold the fins in place and prevent the system from rattling. There's no black plastic sheet or other adhesive to get in the way. 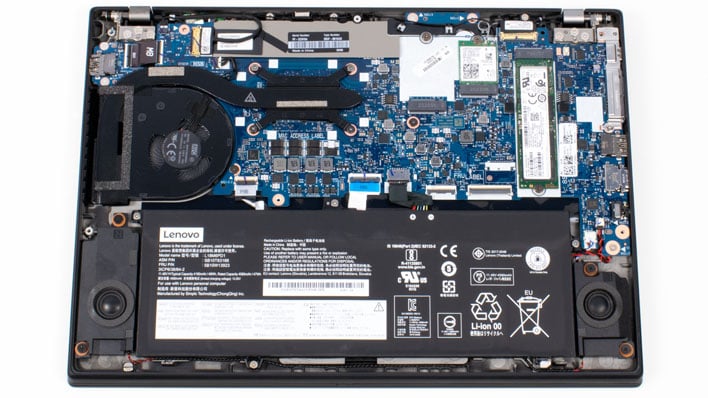 On the motherboard, we see a slew of keyed M.2 slots. The far right has the NVMe SSD screwed in place, and it's a simple user-upgradeable part. Next to that is the Intel Wi-Fi 6 module with integrated Bluetooth 5.1, another easy swap. The empty slot belongs to an optional WAN card. Our review unit has the SIM slot but no WAN card, which is unusual. Normally, these cards are installed in the factory and there's little need for a slot that can't be used. This could just be due to having a review unit and not a retail notebook.

Below the motherboard sits the replaceable 48 Wh battery. Replacing that with a compatible unit is as simple as removing four screws holding it in place and disconnecting the power from the motherboard. On each side of the battery sits the two Dolby-certified speakers, which as we discussed previously, fire into the surface of a desk, table, or your lap. One thing notably absent is any sort of DDR4 DIMM slot, but memory on this system is not user-replaceable. That's typical for such thin notebooks, so users should buy all they need up front. Reassembly is as as simple of sliding the latches at the bottom back onto the front and re-tightening the screws.

The cooler inside the ThinkPad X13 not anything extravagant. However, thanks to the low thermal ceiling of the Ryzen 5 CPU inside of this system, that doesn't necessarily mean the cooling is insufficient. As usual, we enlisted the help of Cinebench R20 to help test that out. Despite the presence of a beefy integrated GPU, we don't have to run a game to hit the thermal limit; the six CPU cores should do that for us all on their own. 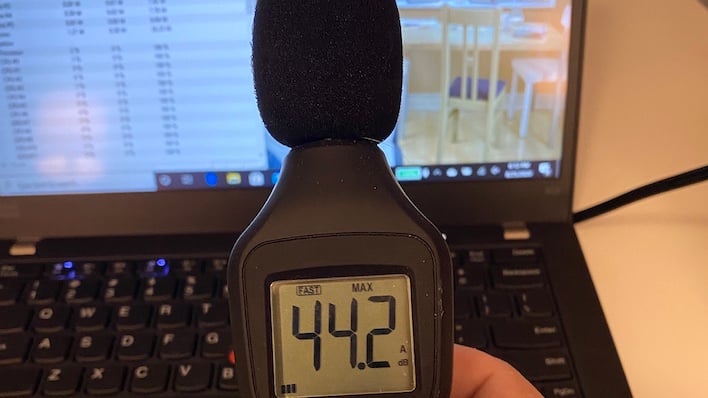 CPU temps weren't something we could track, however. We tried an array of utilities including Open Hardware Monitor, HWMonitor, AIDA64, and Core Temp, but none of them could talk to the Ryzen 5 PRO 4650U. What we can tell you, however, is that the ThinkPad X13 obviously knows the processor temperature, because the fan spins up under a sustained Cinebench R20 load. The first run in our consecutive tests got us a score of 2359, similar to what we reported on the previous page. In subsequent runs of Cinebench, the score dropped a little, but the worst we recorded was 2263. That's less than a 5% difference and came after running Cinebench for nearly an hour straight.

As far as noise goes, the fan isn't all that loud. We measured around 18 inches from the front of the machine and it never exceeded 45 dBA on our monitor. That persisted across all of those multiple runs, too. The system is pretty quiet, but it does put out quite a bit of very warm air out of the right side, which could hit your mousing hand if you're a righty and plan to use an external mouse. The vent placing is unfortunate, especially since so many other notebooks vent out the rear and up in front of the display. Something similar here would have been nice. 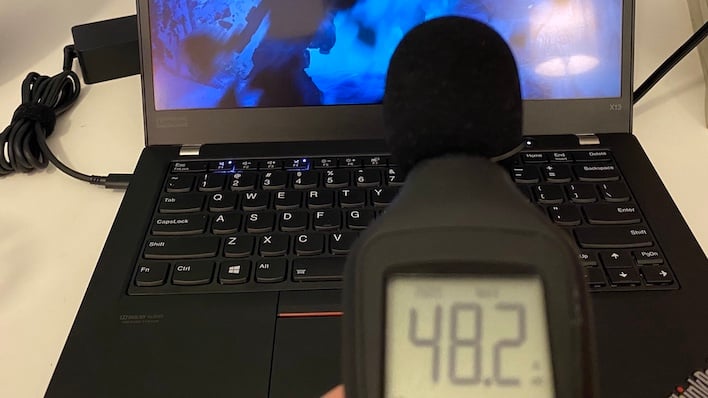 Undeterred by our resilient CPU results, we cranked up Gears 5 for a gaming torture test. The fan got a little bit louder, but still barely exceeded 48 dBA on the meter. Even better, performance was virtually unchanged throughout several runs of the benchmark. Here's where the vent placement really got us, and our hands were pretty uncomfortable after an extended time fragging the Swarm. Under a strenuous real-world workload, the Lenovo ThinkPad X13 passed with flying colors. While it'd be nice to see the actual CPU temps, the end result is pretty convincing. 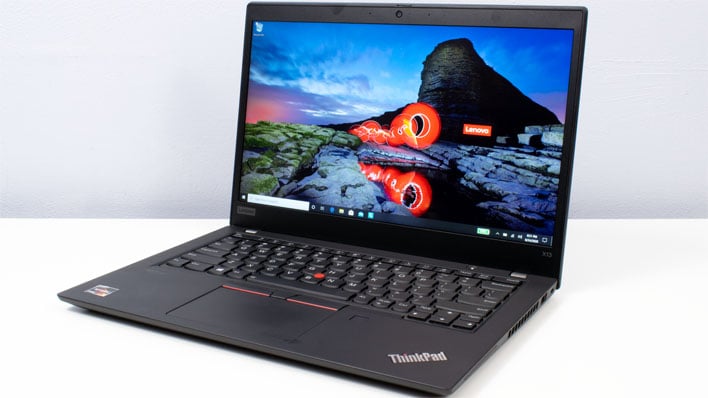 If you skipped to the end of this review, the bottom line is that Lenovo's ThinkPad X13 is a really great ultraportable notebook. AMD's Ryzen 5 PRO 4650U processor delivers outstanding performance in this size class. This system's mid-range CPU traded blows with Intel's latest and greatest mobile Core i7 processors, which is a pretty heady feat. On equal footing, we believe a Ryzen 7 PRO 4750U would have given this Lenovo system a sizable performance advantage nearly across the board. The Radeon integrated GPU is icing on the business-class notebook's cake, too, as even a recent triple-A title Gears 5 was playable at lower settings and resolutions.

The ThinkPad's specs go beyond its AMD processor, too. This system has the total package complete with very fast NVMe SSD storage, the capability to hold a lot of memory, and the latest wireless specs including Wi-Fi 6 and Bluetooth 5.1. While the memory can't be upgraded in an aftermarket setting, the SSD can be replaced with a bigger, faster model by removing a handful of screws. The battery might seem ho-hum at 48 Wh, but the realized battery life was among the best 13" ultraportable notebooks. Eight and a half hours of video playback in our custom test is nothing to scoff at.

Lenovo wrapped all that performance up in a sleek 13.3" form factor. Traditional black ThinkPad styling, a magnesium alloy body, and more input options than you can shake a stick at complete a package that looks as good as it runs. Biometric authentication fans will enjoy the optional fingerprint reader and IR camera. Track Point aficionados get their eraser-style nub, and touch panel enthusiasts can touch and tap their way through Windows if they so choose.

We think most office and web users won't ever need more laptop than this, and in many respects it's kind of overkill. The Ryzen 5 PRO 4650U has a maximum boost clock of 4 GHz, so single threaded performance is very good. In all of our productivity tests, which use a mix of both single and multi-threaded performance, the ThinkPad X13 Gen 1 shined. PCMark and Cinebench in particular were very strong suits. In the places where the system faltered, like our Speedometer web test, it isn't like performance was bad. On the contrary, performance in Speedometer was very good, just not the very best.

Pricing on the ThinkPad X13 seems pretty aggressive compared to premium Intel-based machines. The base model has a modest quad-core Ryzen 3 PRO 4350U processor, 8 GB of DDR4-3200 memory, and a 128 GB NVMe SSD for just $797. Unfortunately, it also has a 13.3" 1366x768 TN display with a maximum brightness of 250 nits, so we can't really recommend that configuration. Fortunately, that display—as well as all the other components—can be upgraded in Lenovo's configuration tool. Our test machine upgraded the CPU to a six-core Ryzen 5 PRO 4650U, a 256 GB SSD, and the 1080p IPS touch display for $1,116. That also includes a fingerprint reader and a backlight on the keyboard. There are more options from there including 32 GB of RAM and a Ryzen 7 CPU, but what we tested has a very reasonable price for the performance on display.

We really dig the Lenovo ThinkPad X13. Very often a notebook can do so much right, but there's a fatal flaw somewhere. Sometimes the cooling isn't up to snuff, or the design language is a little awkward. The ThinkPad X13 does away with all of that, and all we're really left with to complain about is a minor issue with ventilation placement while gaming. Snappy performance, aggressive pricing, excellent battery life, great portability, and solid expansions options add up to a laptop we could see using for years to come. Everyone who needs a great ultraportable should add the ThinkPad X13 to their short list. It is an excellent machine.