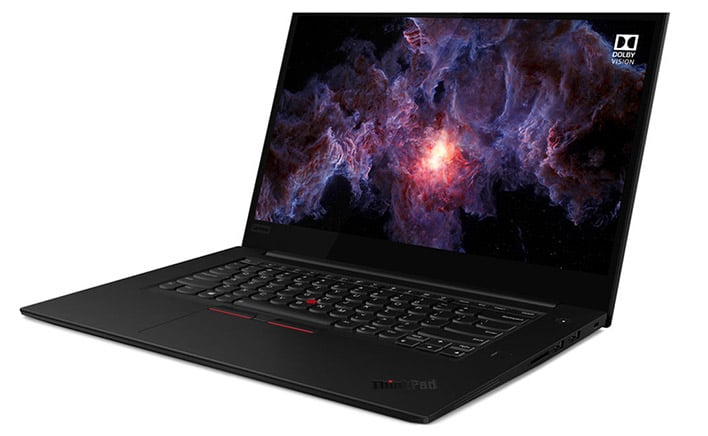 Lenovo's ThinkPad X1 family has long been synonymous with excellent build quality and premium features; Over the summer, we were extremely impressed with the 7th-generation ThinkPad X1 Carbon's build quality, performance, and its bright 4K IPS display. This time around we're looking at the larger ThinkPad X1 Extreme, which shares a design aesthetic with its smaller sibling. However, this model trades the smaller notebook's ultrabook specs for a larger 15.6" chassis and higher-powered components.

Much like the Carbon, the ThinkPad X1 Extreme starts out with a 1080p IPS display and has several panel options that top out with a 3840x2160 UHD unit with a maximum brightness of 500 nits and certification for DolbyVision HDR. The specification similarities end there, though, since the Extreme has a larger chassis suitable for its 15.6" panel. While our review unit has the UHD IPS panel, Lenovo also gave us a heads-up that a 4K OLED version is in development, too.

Thanks to the extra breathing room afforded by its chassis, this system picks up 9th-generation CPUs from Intel starting with the Core i5-9300H and goes up to 6-core processors from there. The ThinkPad Extreme can also support up to 64 GB of memory and a 1TB M.2 NVMe SSD. One of the biggest differentiators, however, is the discrete graphics: an NVIDIA GeForce GTX 1650 with 4 GB of GDDR5 memory. There's a lot more to a ThinkPad, however, so let's take a look at the rest of our system's specs and then dig in a bit deeper... While not completely maxed out, our ThinkPad X1 Extreme looks to be a very potent beast. The Core i7-9750H is a six-core, 12-thread processor with a maximum turbo speed of 4.5 GHz. A healthy 32 GB of DDR4-2666 memory keeps the processor rolling in memory capacity and bandwidth. If that's not enough, though, 64 GB is available as an upgrade. Primary storage comes in the form of a 1 TB Samsung NVMe SSD, so disk speed will be strong as well. Just like all the other configurations, the GeForce GTX 1650 is here, too. For wireless networking, Lenovo includes an Intel 802.11AX Wi-Fi 6 module that also handles Bluetooth 5.0. The first thing that strikes us about this system is the display panel. This 4K UHD panel gets pretty bright at full blast, outputting a maximum of 500 nits. That's plenty bright for just about anything with standard-dynamic range lighting, and even carries HDR 400 compatibility. Windows 10's HDR settings will see this panel is capable of high-dynamic range lighting, too. The panel sits on a 180-degree hinge which lets the display open flat onto a desk or table. Just like every other ThinkPad that Lenovo sells right now, the ThinkPad X1 Extreme boasts an excellent chicklet-style, spill-resistant keyboard with a white backlight. There's plenty of travel in this notebook's keys, which makes for a very pleasant typing experience. This whole article was created using the ThinkPad X1 Extreme's built-in inputs, so we've had ample time getting accustomed to typing on this lightweight laptop.

Also along for the ride is Lenovo's signature red TrackPoint pencil eraser style nubbin, which allowed us to move the mouse pointer on the screen without having to move our hands away. It's not the fastest mousing experience around, but it does nicely. There's also ample room for pointer navigation on the ThinkPad's trackpad below the keyboard, where multi-touch gesture input lets you quickly switch apps, scroll, and manage windows with ease. Three mouse buttons at the top of the pad do left, right, and middle click duties, too.

Lenovo included ample external connectivity options with the ThinkPad X1 Extreme. On the left of the machine, the stars are a pair of Thunderbolt 3 ports. These connectors have USB Type-C connectors and work with USB 3.1 Gen 2, DisplayPort 1.4, and of course Thunderbolt peripherals with the reversible connector style. There's also an HDMI 2.0 port, which drives 4K HDTVs or monitors at 60 Hz.

After that is Lenovo's proprietary Gigabit Ethernet connector, which requires a dongle. Many thin laptops have a standard fold-out RJ-45 Ethernet jacks, and we would have liked to see something similar here. The rightmost connector is a four-pole combination headphone and microphone jack. Lastly, that jack on the far left isn't a USB port—this connection is for the 135-watt AC adapter included with the Extreme. The AC adapter isn't a huge brick, either; it tipped our scales at just 12.3 ounces.

On the right, we've got a pair of USB 3.1 Gen 1 ports with Type A connectors, a full-sized SD card reader, and a Kensington-style lock port. Towards the front of the machine is an optional smart card reader, too. One thing you may have noticed is a total lack of vents so far in our guided tour. We'll see later on during our tear-down where exactly the ThinkPad X1 Extreme vents hot air a little later on.

Next up let's see what other accouterments the ThinkPad X1 Extreme has on offer.
NEXT PAGE