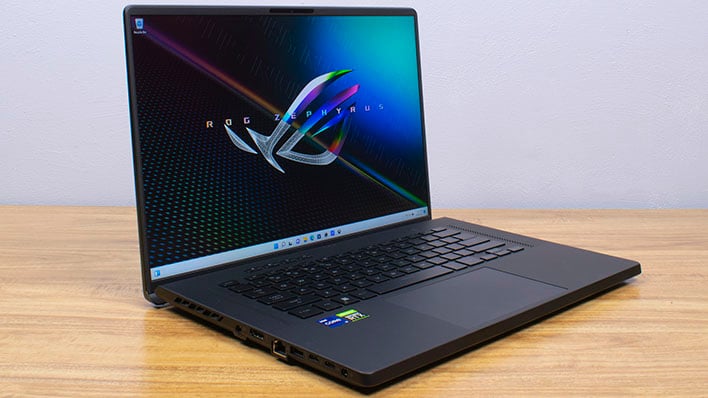 By most accounts, Intel's 12th Gen Core processors based on the hybrid Alder Lake mobile architecture have been a smashing success for gaming laptops. From class-leading desktop performance to outstanding mobile prowess, the blue team's Alder Lake family has shown strong gains in workloads of all kinds. The first notebooks we looked at, an updated MSI GE76 Raider and an Alienware x17 R2, were both suitably impressive, but their large footprints and hefty weights aren't for everybody. Enter an upgraded version of one of last year's slimmer and lighter gaming laptops, the ASUS ROG Zephyrus M16.

Last year's Zephyrus M16 was pretty impressive and delivered good performance for its price point. This year's model, however, is a different beast entirely with double the memory, faster storage, and (impressively) enough thermal budget for a powerful NVIDIA GeForce RTX-30 series GPU.

Let's not get too into the weeds in the lead-in, though; first let's meet the new 2022 ASUS ROG Zephyrus M16 in Dave's quick tour YouTube video review, and then we'll pore through its specs... 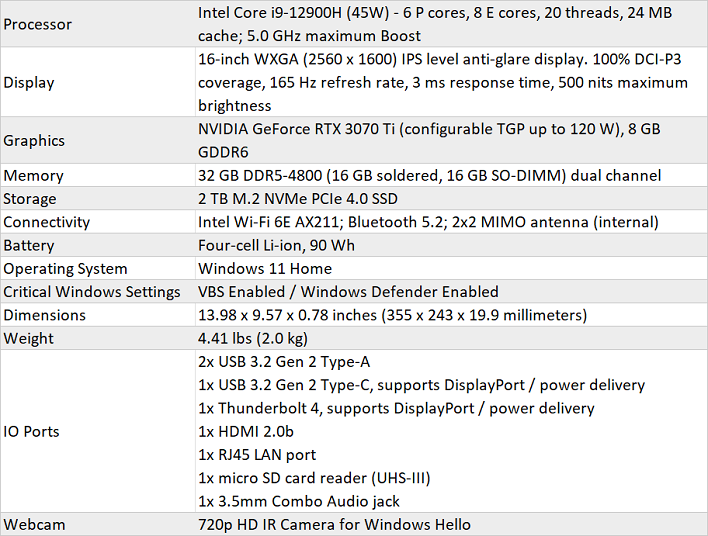 It all starts with one of Intel's latest Alder Lake-H CPUs, the Core i9-12900H. Like other 12th Generation Core processors, this one has a mix of performance and efficiency cores. In this case, it's six P cores with Hyper Threading and eight E cores with no SMT, which adds up to a grand total of 20 threads spread across 14 cores. The only real difference between this CPU and the 12900HK in the updated MSI GE76 Raider is the maximum boost clock, which is still a very high 5GHz here, for a single core. There's 24 MB of L3 cache and a 45W TDP. All told, this thing should rip through any workload with ease.

To back up the cutting edge CPU, ASUS has endowed the ROG Zephyrus M16 with 32 GB of DDR5-4800 memory. Half of that is soldered to the motherboard, but the other half is a standard DDR5 SO-DIMM, which can be upgraded with a 32 GB module for a total of 48 GB. There are 16 GB models of the M16, but note that those come with 8 GB soldered and an 8 GB SO-DIMM. All versions of the M16 include a PCI-Express 4.0 NVMe SSD, and ours has a whopping 2 TB included. Folks with big Steam libraries can rejoice, as you don't have to upgrade storage right out of the box.

Speaking of Steam, gamers will appreciate the NVIDIA GeForce RTX 3070 Ti GPU built into the Zephyrus M16. This Ampere GPU has 5,888 CUDA cores and 8 GB of 12 GT/s GDDR6 memory to chew through gaming workloads. As with all Ampere GPUs, there's support for hardware-accelerated ray tracing and NVIDIA's AI-focused Tensor cores are aboard as well. For whatever reason, NVIDIA doesn't divulge the number of Tensor or RT cores on its specs page, but there's plenty to drive both DLSS and our ray tracing tests. What we do know however, is that the RTX 3070 Ti here has a 120-Watt TGP with Dynamic Boost to pull even more power if the CPU isn't maxed out. If you remember last year's Zephyrus M16, that system only had a 60 Watt GPU, so this is a big step up. The boosted graphics power most likely accounts for the slight increase in weight, something we'll investigate in our teardown.

Along with everything else, the networking features of the ROG Zephyrus M16 are cutting edge. First off, the system's wired Ethernet port has a Realtek 2.5 Gigabit Ethernet controller behind it. Wireless connectivity comes from Intel's AX211 Wi-Fi 6E and Bluetooth 5.2 combo chip. The laptop has a 2x2 MIMO antenna configuration and we had no problem maxing out a 500 Mbps Internet connection downloading our gaming benchmarks to the system via Steam and Ubisoft Connect. Your mileage may vary, of course, but our dual ASUS AX3000 routers were up to the challenge. 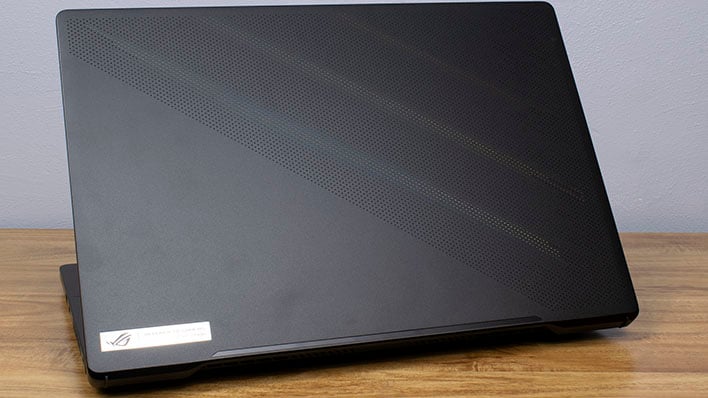 This year's ROG Zephyrus M16 is visually identical to last year's model. If we re-ran the photos from last year's model you'd never know it, other than the Windows 10 GUI. As before, the body is mostly black soft-touch plastic which does a reasonable job of rejecting fingerprints but doesn't feel quite as premium as the all aluminum enclosure on something like a MacBook Pro. There's a little bit of flex in the polycarbonate body, but we really had to jab at the palmrest to feel it; it's pretty sturdy while typing and gaming.

The lid, which is held over from last year's version, is one of the most attractive parts of the ROG Zephyrus M16. Roughly half of it is covered by 8,000 precision-milled holes, backed by a prismatic film that reflects light in the room. It's eye-catching without being gaudy. The ROG Zephyrus G14's LED version from 2020 was creative, but a bit garish for my tastes. Here, however, the reflective nature of the film walks the fine line between attractive and gaudy. The chassis itself is the same sort of off-black color as last year's model, which is somewhere between midnight black and charcoal gray. 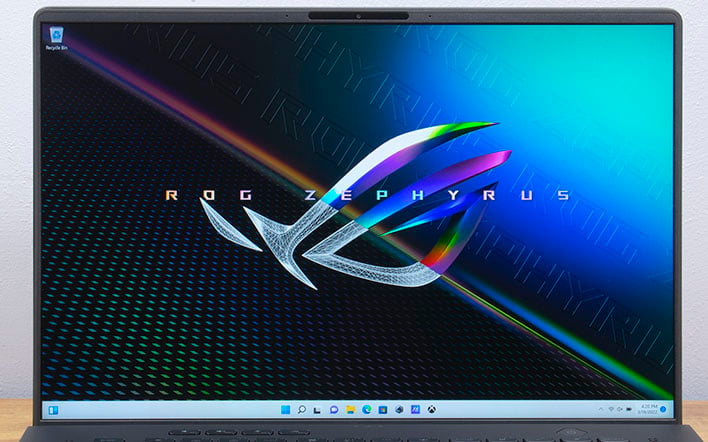 Thankfully the star of last year's show returns: a glorious 16-inch 2,560 x 1,600 IPS-level display with a 165 Hz refresh rate and a response time of just 3ms. For me, this is just the right mix of size, resolution, and refresh rate for gaming on a pretty high-end GPU. Don't get me wrong; 4K is great, and so is the ultra-smooth 360 Hz display on the X17 R2 and GE76 Raider. But the higher resolution over 1080p adds detail without totally tanking performance like 4K can do. The 165 Hz panel is extremely smooth without overpaying for an ultra-high refresh rate like the others, too.

The other side of the display coin is color reproduction, and the ROG Zephyrus M16 excels there, too. The display gets 100% DCI-P3 coverage and is factory calibrated and Pantone-validated out of the box. That means the M16 is a pretty excellent all-round content creation workstation. Photo editors and video producers on the go will have no issues doing their work on this display. The brightness, which we measured right at 400 nits for non-HDR content, is adequate for SDR video. It does carry HDR400 and Dolby Vision certification, but there's no local dimming and it won't burn your retinas, but we did measure closer to the advertised 500 nits with HDR enabled. The lack of local dimming and lower brightness levels are both very common on notebooks, though, so we don't hold this fact against the M16. Of course, the display's 16:10 is the most noble of all aspect ratios, making plenty of room for video controls without covering content while streaming video from Netflix, Disney+, and Apple TV+ and letting everyone see more lines of text in the web browser or editor of choice.

On top of the display sits a 720p webcam with infrared sensor. We do wish manufacturers would get past 720p and start making 1080p webcams the norm. Work-from-home is not going anywhere, and neither are meetings on Microsoft Teams. Especially if your meetings are customer-facing events, you almost have to invest in a better webcam. We're big proponents of facial recognition, though, and the IR sensor and Windows Hello worked quite well together. Also working well together is the pair of noise-canceling microphones that flank the webcam. The speakers carry Dolby Atmos certification, and they're certainly better than average, but as is the case with most laptops, they lack bass. We'd opt for a headset while gaming for an immersive experience, but for watching YouTube videos or other spoken content, they do a fine job. 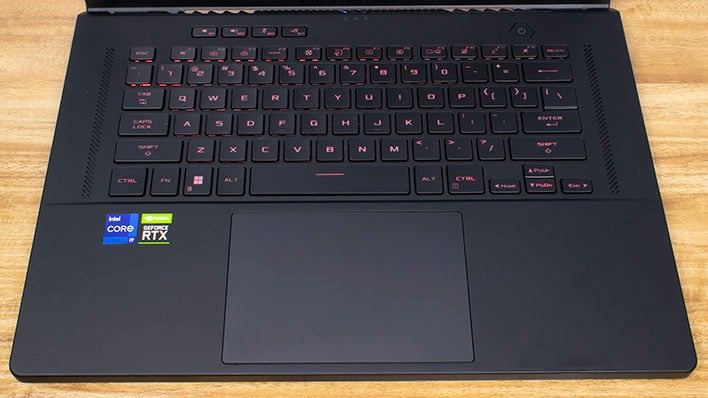 Just like last year's model, below the screen sits ASUS's Stealth Type keyboard. The company says that each key stroke registers at 30 dBA or less, which is relatively quiet, but the keyboard is still audible. At any rate, it's definitely stealthy, and we didn't have any issues with dropped keystrokes or duplicated input. As always, we produced this review using the notebook's keyboard, so we've had quite a bit of experience. The single-zone RGB backlighting can be controlled through ASUS's Armoury Crate software or disabled entirely if it's not to your liking.

While we'd never do much gaming with a touchpad the one ASUS includes in the ROG Zephyrus M16 is pretty nice. First, its a full five inches wide and more than three inches tall, so there's plenty of space to drag around the mouse pointer. The glass surface is smooth to the touch and the built-in buttons are nice and responsive. Windows 11's gesture inputs all work as they should, too.


ASUS has given the ROG Zephyrus M16 plenty of external connectivity. The right side has a micro SD card reader and a single 10 Gbps USB 3.2 Gen 2 Type-A port. The left side has HDMI 2.0, the aforementioned 2.5 Gig Ethernet RJ45 port, Thunderbolt 4, two USB 3.2 Gen 2 ports (one Type-C, the other Type-A), and a combination headset jack. The layout does seem to favor right-handed mousers with all the connectivity on the left side, though, so lefties should be aware of that. Since the lid folds down behind the system, there is no rear connectivity.

Out of the box, the ROG Zephyrus M16 runs Windows 11 Home without much extra software. ASUS does include a McAfee 30-day trial, but that can be easily removed. Otherwise, the only extra software was either a driver control panel related to the hardware or the company's own control panels. The most important piece of ASUS software is Armory Crate, which runs all of the power and fan profiles as well as controls RGB backlighting for the keyboard along with any connected Aura Sync-compatible peripherals. It's also home to diagnostics and system configuration information, a game library manager, and a settings sync service as part of MyAsus. 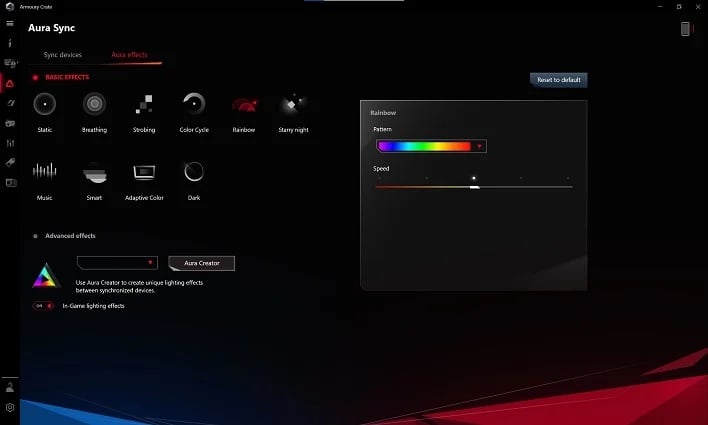 Most important for our testing, there are a total of three power and fan profiles: Performance, Silent, and Turbo. Silent is nice when you need the system to be as quiet as possible; it lowers the maximum power consumption for both the CPU and the GPU. eSports titles that run way faster than the 165 Hz display, for example, can be more enjoyable that way. We still saw well north of 300 fps in Counter Strike: GO on Silent, but more intensive games like Gears 5 saw worse performance.

On the other hand, Turbo turns up the power consumption a bit, allowing the GPU to consume 120 Watts, and maxes out the fans to wring every last drop of performance that it can from the system. The extra power does give a tangible increase to frame rates, as we'll investigate later, although it didn't help in our productivity tests. Both of these are relative to the default Performance mode, which is the default setting with a 100 W limit for the GeForce RTX 3070 Ti, and it's the mode we'll use as our basis of testing.

And that's a great segue. Speaking of performance, stay tuned on the next page for our full run-down on the ASUS ROG Zephyrus M16's full system and gaming benchmarks...
NEXT PAGE