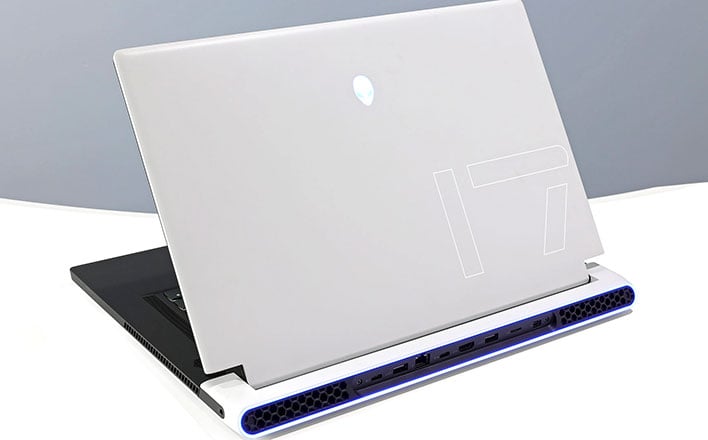 For those of you who find joy in larger gaming laptop form factors, the recently unveiled Alienware x17 R2 is proof that your mobile battle station size preference has not been left behind. Better still, Dell has a found a way to maintain its larger display and keyboard form factor while making this the thinnest 17-inch Alienware laptop yet, and it doesn't come at the expense of CPU and GPU firepower or cutting-edge features. So, when the opportunity came to kick the tires on the new Alienware x17 R2, we pounced. Afterall, now also infused with Intel Alder Lake mobile CPU and beastly GeForce RTX 3080 Ti mobile GPU muscle, this thin but spacious alien craft should chalk up some out-of-this-world benchmark numbers to boot.

We'll get to the numbers in a moment, but first let's examine the physical makeup and what lies under its hood. Dell trotted out the latest iteration of the Alienware x17 at CES 2022, the same event that saw the unveiling of a bevy of Intel 12th Gen Alder Lake-H laptop CPUs promising up to a 28 percent boost for gaming, and a new top-dog mobile GPU from NVIDIA in the GeForce RTX 3080 Ti. As such, Dell wasted no time injecting the x17 R2 with the fastest mobile silicon from both Intel and NVIDIA.
Specifically, the x17 R2 we're testing here rocks an Intel Core i9-12900HK processor, which is a top-of-the-line 14-core/20-thread chip comprised of six (Golden Cove) P-cores supporting Hyper Threading for heavy lifting, and eight E-cores (Gracemont) for less demanding compute tasks. Those P-cores can ramp up to 5GHz, and there's also a chunky allotment of L3 cache (24MB), all wrapped in a 45W (base) power package. But let's pause for a few minutes with all the speeds and feeds, to give you the quick nickel tour hands-on with the new Alienware x17 R2, so you can see it in the real, then we'll come back to the analysis... 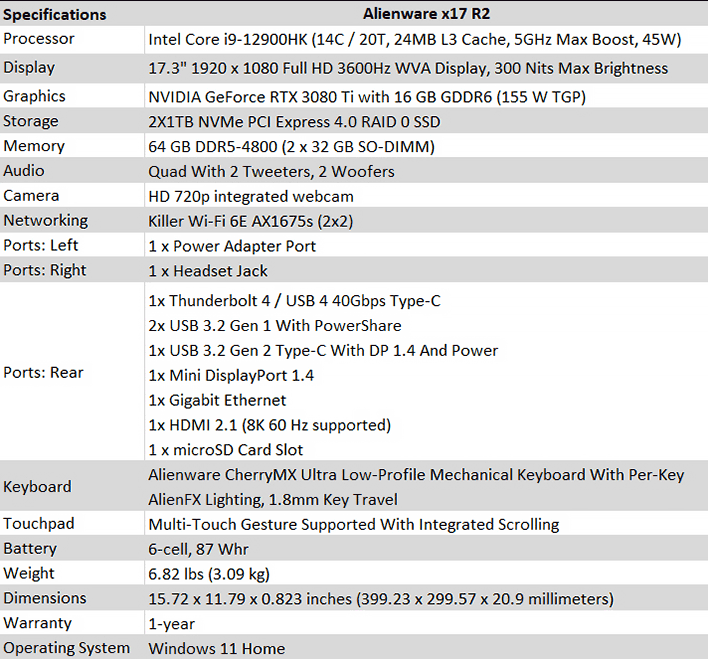 
Perusing further down the specs list, this machine's GeForce RTX 3080 Ti GPU ups the graphics ante with 7,424 CUDA cores (up from 6,144 in the non-Ti variant) and 16GB of GDDR6 memory pushing data through a 256-bit interface. As with every other mobile GeForce RTX 30 series GPU, NVIDIA's partners have free rein to configure its TGP (Total Graphics Power) envelope—in this case from 80W to 175W, with boost clocks ranging from 1,230MHz to 1,590MHz.
Regardless, gamers don't necessarily have to opt this top-end config for either the CPU or GPU. You can alternatively configure the Aliewnare x17 R2 with a Core i7-12700H processor (also a 14-core) and a variety of GPUs, starting with the GeForce RTX 3060.
Likewise, Dell's spec sheet says it offers this laptop with 16GB, 32GB or 64GB of DDR5-4800 memory, and for storage buyers can opt for a single drive setup ranging from 256GB to 2TB, or a dual-drive RAID 0 array in 512GB to 4TB of total capacity, all of which are of the NVMe SSD variety with up to PCIe Gen 4 speeds. Our test machine came strapped with 64GB of DDR5-4800 and dual 2TB PCIe 4 SSDs in RAID 0 for over 13GB/sec of blistering storage bandwidth. And for the GPU, the NVIDIA Control Panel shows a max 175W TGP for the RTX 3080 TI in our system. 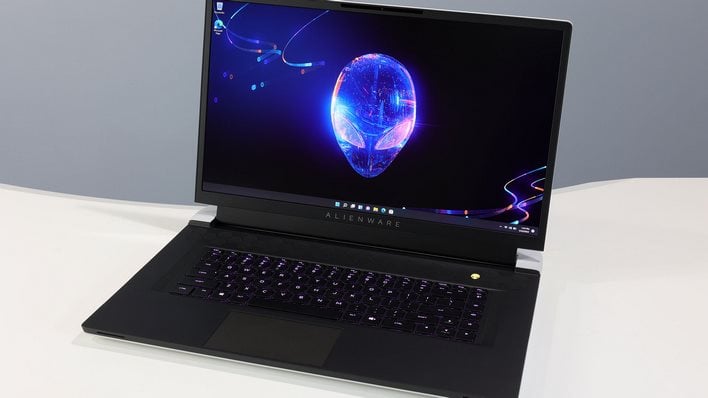 There are different display panel options too: 1080p at 360Hz with a 1ms response time, 1080p at 165Hz with a 3ms response time, and a 4K resolution screen with a 165Hz refresh rate and 4ms response time. All three support NVIDIA's G-Sync and Advanced Optimus technologies, and are Dolby Vision certified. Additionally, both 1080p screens offer 300 nits brightness and 100% coverage of the sRGB color space, while the 4K panel can drive up to 500 nits with 99% coverage of the DCI-P3 color space. The unit we received sports the 360Hz panel option for lighting-fast visuals.
As configured with a Core i9-12900HK, GeForce RTX 3080 Ti, 64GB of DDR5-4800 RAM, 4TB SSD in RAID 0 (2x2TB), a 1080p 360Hz display, and Cherry MX Ultra Low-Profile key switches (more on that in a moment), this gaming powerhouse costs $4,799.99. That's obviously not cheap, though neither is the component load-out here. The base cost of entry is around half that price tag ($2,299.99 before any discounts or coupon codes), which still nets you a strong setup of a Core i7 12th Gen processor, 16GB of RAM, 512GB SSD, 165Hz display and a GeForce RTX 3060. 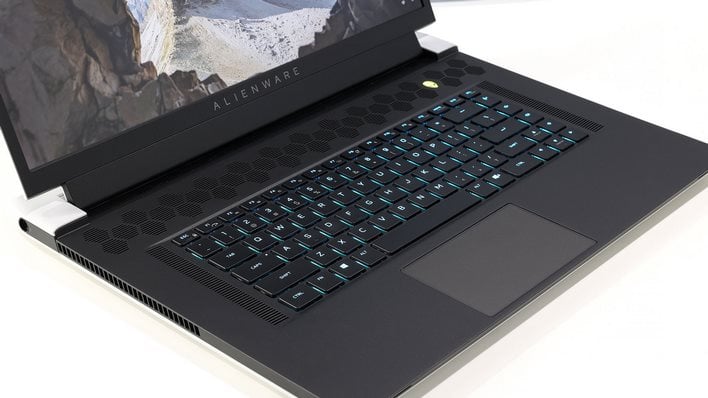 Our x17 R2 model measures 11.79 x 15.72 x 0.823 inches. The other two display options are just a touch thicker at 0.843 inches, which is a really negligible difference (this thing is thin). Depending on the configuration, the weight ranges from 6.54 to 6.82 pounds. That's not bad at all for a 17.3-inch laptop, particularly one as high powered as this setup, and the skinny waistline is certainly impressive. Even more so when you consider that the flagship mobile GPU inside this laptop is dialed up nearly as far as NVIDIA specifies.
This machine's physical design language is based on what Dell dubs Legend 2.0, which brings with it a style and refinements similar to what Dell debuted with its revamped Aliewnare Aurora R13 desktop we reviewed last November. It has a more modern look compared to previous generation laptops, while preserving a distinct styling that is unmistakably Alienware. 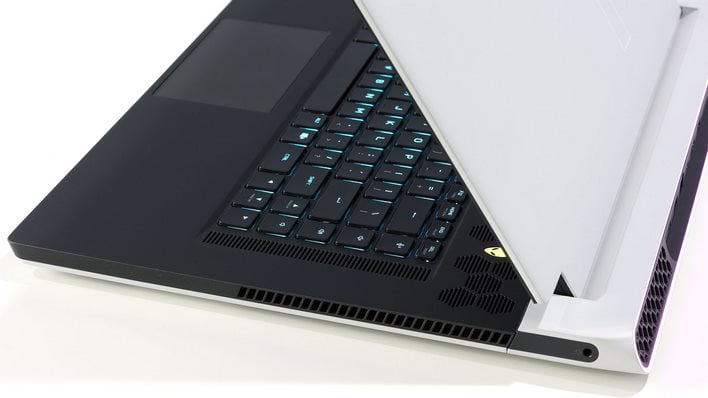 Beauty is in the eye of beholder naturally, and to our eyeballs, this is a slick looking machine. It's also impressively rigid, despite its thin and relatively lightweight profile, the result of using a magnesium alloy and CNC machined aluminum parts. It doesn't feel cheap or chintzy, but instead dense and powerful, weighing in at 6.82 lbs for our review unit. 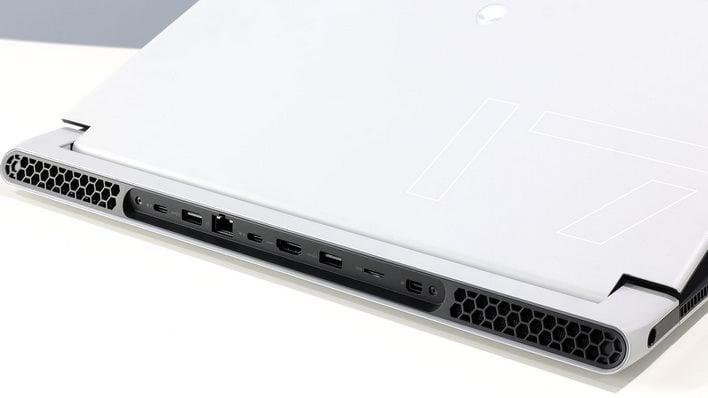 Most of the physical I/O options can be found on the rear of the laptop rather than the sides. Specifically, around back you'll find a USB 3.2 Gen 1 Type-A port with PowerShare, a USB 3.2 Gen 2 Type-C port with PowerShare, a Thunderbolt 4 / USB 3.2 Gen 2 Type-C port with Power Delivery, a microSD card slot, and an HDMI 2.1 output. The power/DC-in port is the only thing you'll find on the left edge of the laptop, while the right side is home to a 3.5mm headphone jack.
Of course, having nearly all your IO connectivity on the back edge isn't the most convenient, as it means having to reach around the system any time you want to plug in a flash drive or other external device. However, the upshot is this decision likely contributed to the overall thinner profile and cable management should be somewhat cleaner for most home office setups. 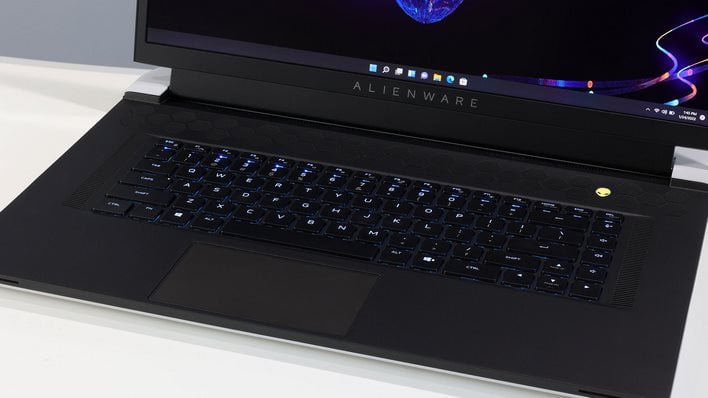 Like Dell's previous generation (Alienware m17 R4), the updated Alienware x17 R2 is kitted with an ultra-low profile keyboard built atop Cherry MX mechanical key switches. These switches were born out of a partnership between Dell and Cherry, with over 160 prototypes leading up to the finalized design.
Key travel on this deck is a nice, deep 1.8mm, which flies in the face of this laptop's thinner profile. In addition, we noticed zero flex on this typing deck and its keys offer up that delightful tactile bump that many mechanical key switches are known for.

In short, the new Alienware x17 R2 is a premium, well-crafted machine with striking good looks and serious firepower on board, but now let's turn our attention to the benchmarks...