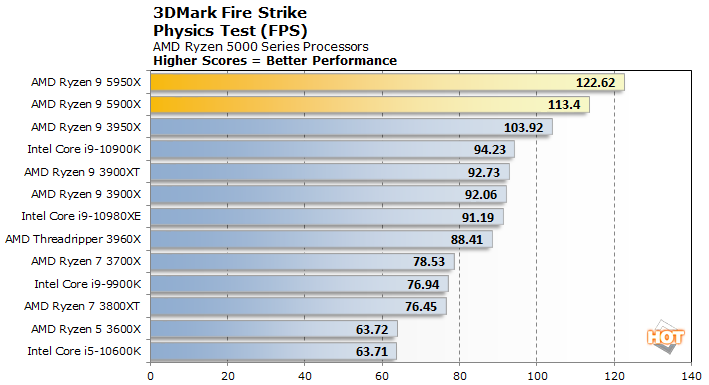 AMD's Ryzen 9 5900X and 5950X finished the multithreaded CPU Physics test well out in front of every other platform, significantly outpacing 10th Gen Core processors and the Ryzen 3000 series. 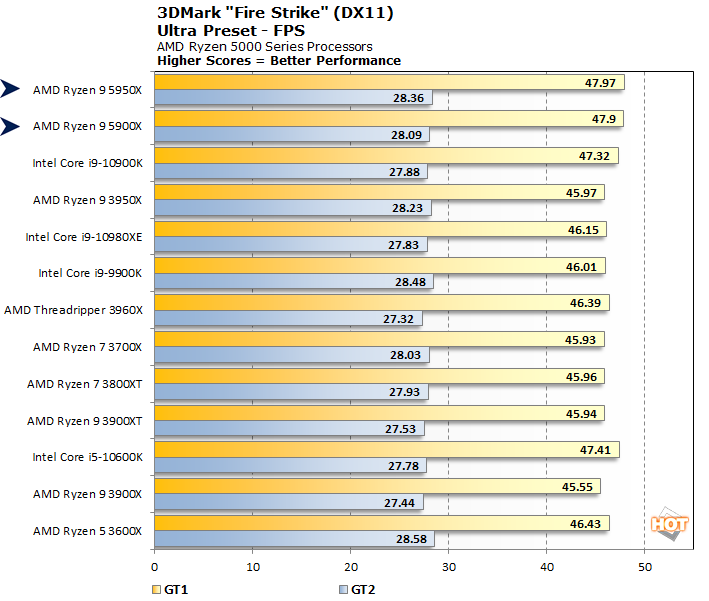 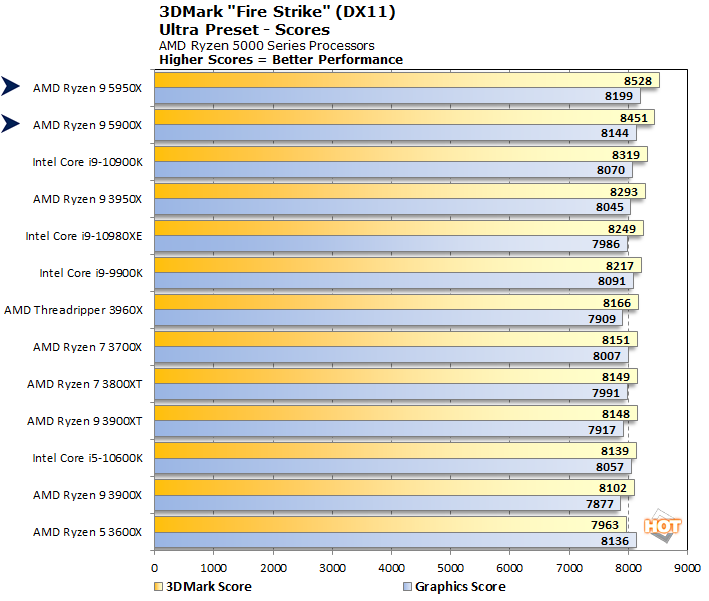 The Ryzen 9 5000 series' strong showing the 3DMark Physics test helps push them into the lead in the GPU-bound 3DMark Fire Strike Ultra benchmark as well. Although the deltas are small here, the Ryzen 9 5900X and 5950X technically pull off another win. 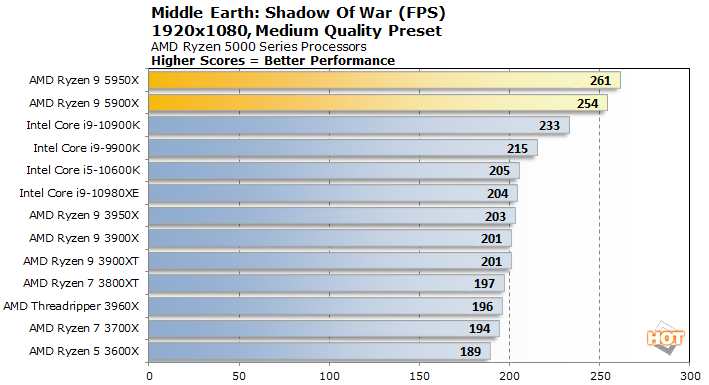 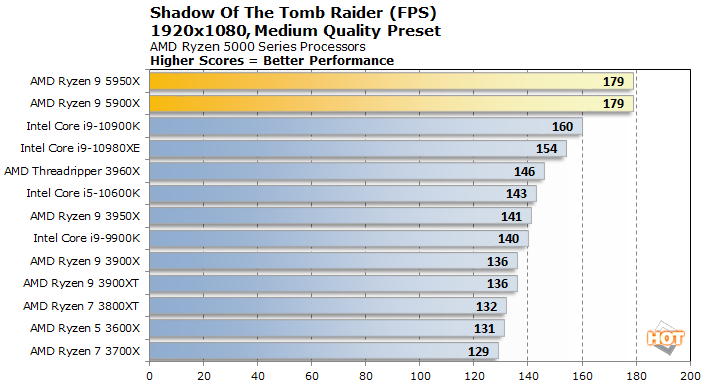 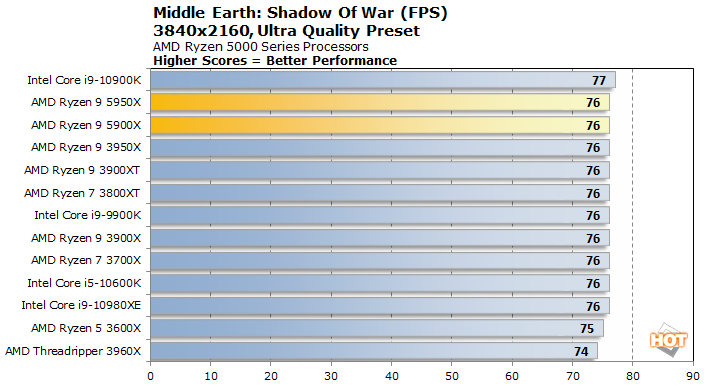 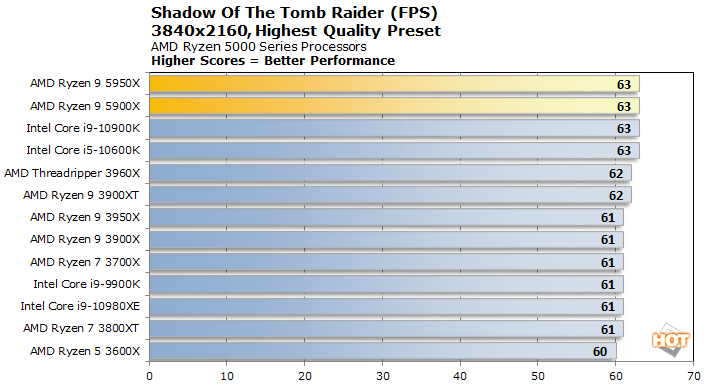 When you crank up the resolution and image quality, however, and shift the performance bottleneck onto the GPU, the playing field levels out and all of the platforms finish in a dead heat. Yes, there are small differences here and the new Ryzen 5000 series processors finish at the top of the charts, but when you're mostly GPU bound, all of the CPUs we tested can be considered perfectly adequate gamers.
We also spent some time overclocking the AMD Ryzen 9 5950X, to see if we could wring any additional performance from the processor. AMD offers an array of tools for overclocking Ryzen 5000 series processors, including "one-click" methods like Precision Boost Overdrive and Auto-Overclocking via Ryzen Master, or manual overclocking via Ryzen Master and/or the BIOS.

Because all Ryzen 5000 series processors are unlocked, manual overclocking is simply a matter of altering a few multipliers, tweaking voltages, and dealing with the additional heat and power requirements. These processors can be overclocked by adjusting base clock frequencies as well, so it's possible to really fine tune the end result if you so choose, but the quickest and easiest gains will be come by tweaking multipliers.

We took a somewhat conservative approach to overclocking the Ryzen 9 5950X to ballpark an approximate “worst case scenario”. Our results should be repeatable, assuming you’ve got similar hardware and everything is working properly. You shouldn’t need exotic cooling to pull off what we did here. We used AMD's Wraith Prism cooler with the motherboard and processor installed in a mainstream NZXT mid-tower. Of course, more exotic cooling and lower temperatures will result in higher overclocks, but hardcore cooling is not a necessity to achieve some significant performance gains with the Ryzen 5000 series. With their default settings, these processors run nice and cool. Both of our chips hovered right around the 80°C mark after 10 consecutive Cinebench runs, using only the the AMD Wraith Prism. 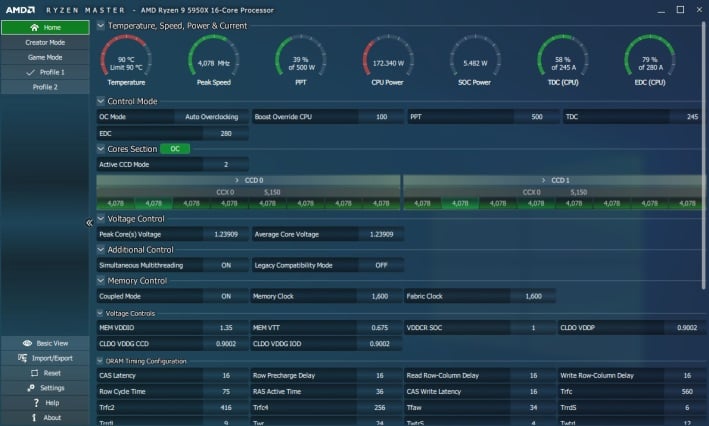 To see what our particular chip could do, we tried all of the overclocking modes available within Ryzen Master -- PBO, AutoOC, and Manual. If you recall, PBO allows the processor to consume more power through the socket, and exploit any additional current headroom available in motherboards with robust VRM configurations that exceed AMD specifications. AutoOC works similarly to PBO, but manual overclocking requires tuning frequencies and voltages on your own, though the processors will still downclock when idle.

Using PBO or AutoOC, we saw all CPU cores boost to just shy of 4.1GHz, with voltages in the 1.2v range (give or take), as shown in the screenshot above.  PBO and AutoOC worked well in our system and seemed to boost performance considerably, while taking advantage of all of the thermal headroom available with our cooler (note that stable 90°C temp above). With a more capable cooler, we're confident we would have seen even better performance, because our motherboard still had some power headroom left. 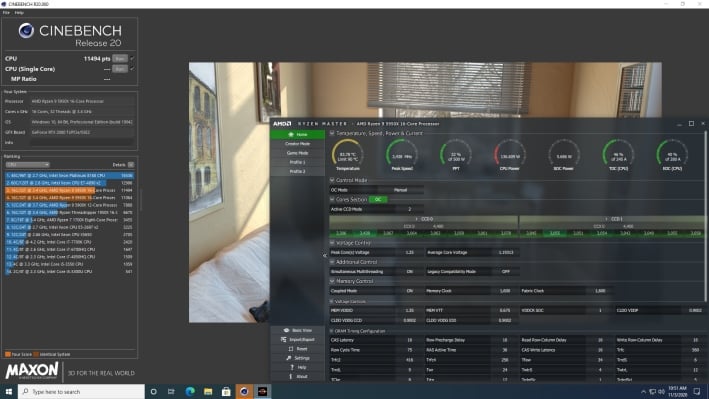 
For our manual overclocking efforts, we were a bit more ambitious out of the gate, but immediately ran into a wall. We initially shot for a lofty 4.5GHz all-core overclock at 1.4v, but we couldn't get the system stable. At this speed, the chip's temp would quickly shoot into the high 90-degree range when under sustained load, and our test rig would throttle and often shut down. So, we backed the voltage and multiplier down incrementally and eventually settled into a 4.35GHz all-core overclock at only 1.25v.  We should note idle temperatures remained relatively cool and stayed in the upper 30°C range, and it was only while under 100% load that the temperature spiked and exceeded the recommended 90°C peak. 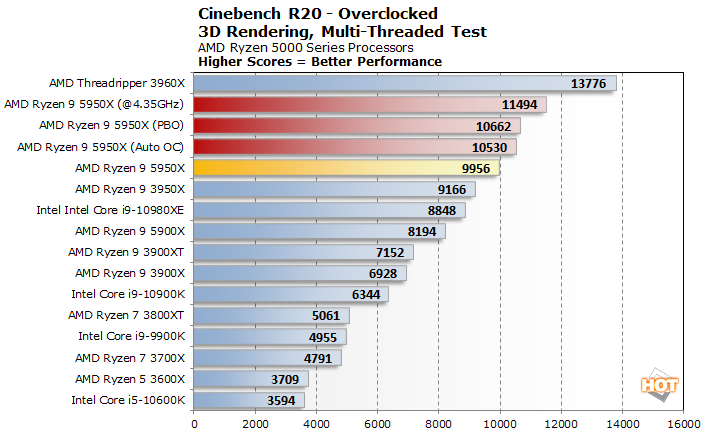 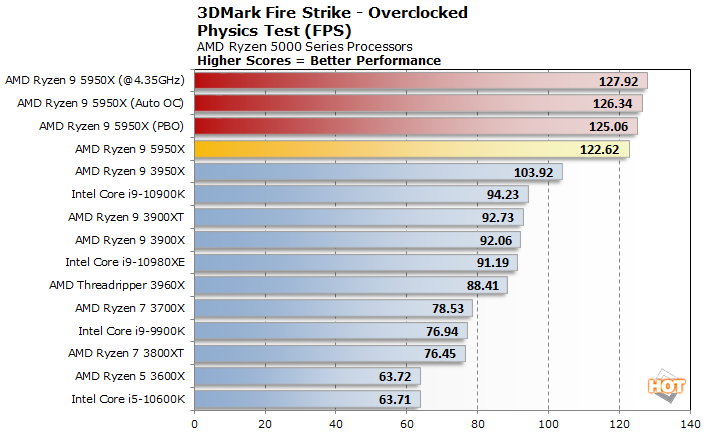 Auto-OC and PBO easily boosted performance by about 5%-6% in Cinebench, though 3DMark's multi-threaded Physics benchmark showed milder gains. Our manual overclocking efforts netted a performance increase of over 15% and inched the 16-core Ryzen 9 5950X even closer to the beastly 24-core 3rd-Gen Threadripper. if you've got an adequately cooled system, that's some nice "free" performance for only a couple of clicks in Ryzen Master. 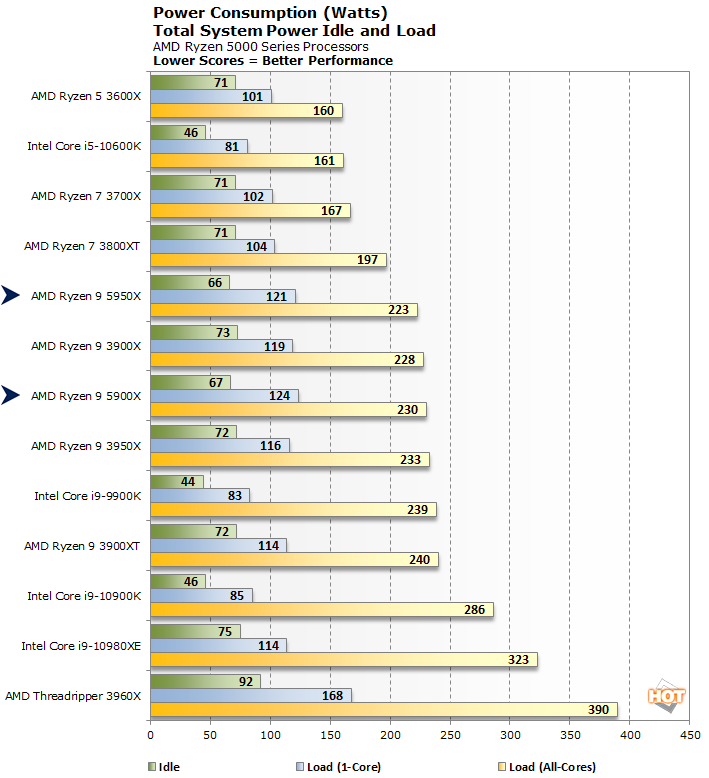 AMD's Ryzen 9 5950X and Ryzen 9 5900X were both relatively power friendly. First off, we seem to have received a particularly good Rzyen 9 5950X as it consumed similar power to the Ryzen 9 5900X across the board (we checked this multiple times). Both of the processors consumed less power than their 3rd-Gen Ryzen processor counterparts while idling as well, but Intel still has a clear advantage in that regard, at least with their mainstream platforms. Single-core power is up gen-vs-gen with Ryzen, however. In addition to the architectural enhancements in Zen 3, AMD is pushing the power envelope a bit higher with lightly threaded workloads to maximize the Ryzen 5000 series' single-thread throughput.

We also monitored power while overclocked and saw some big jumps in consumption. Enabling Precision Boost Overdrive, Auto OC, or manually overclocking to the level we achieved (4.35GHz all-core @ 1.25v) resulted in 85 - 109 additional watts of power being consumed. All told, that's not an insane number for total system power, but should you want to squeeze every last ounce of performance from a Ryzen 5000 series processor, be sure to spring for a decent cooler.