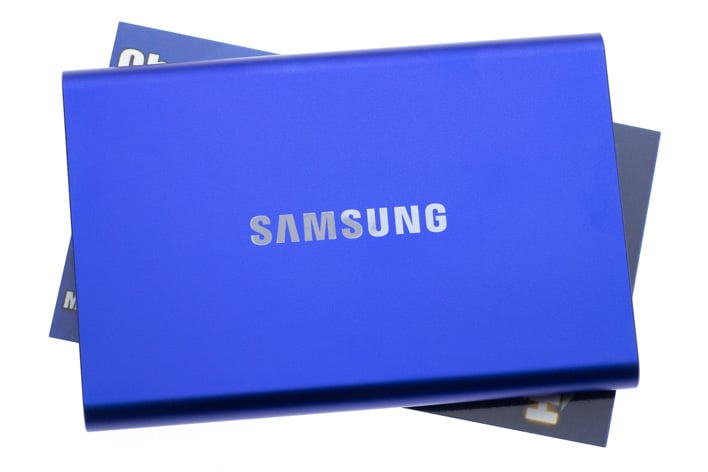 Earlier this year, Samsung unveiled the privacy-minded Portable SSD T7 Touch. This external USB-C storage device delivered high capacities up to 2TB and impressive read-write speeds over USB 3.2 Gen 2. Its headlining feature, however, was an integrated fingerprint reader to effortlessly unlock the drive’s AES 256-bit encryption. Not everyone needs this one-touch access to their files though, and would prefer a more straightforward external storage solution. For these users Samsung has released a non-touch variant of the T7 to shed some cost, but keep the rest of the goodness intact. 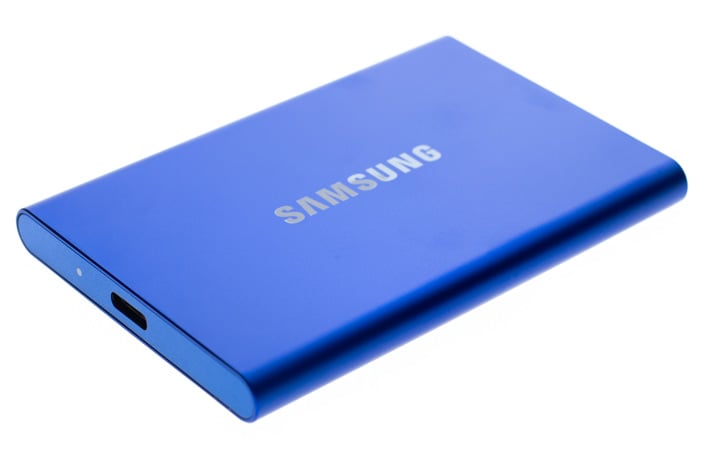 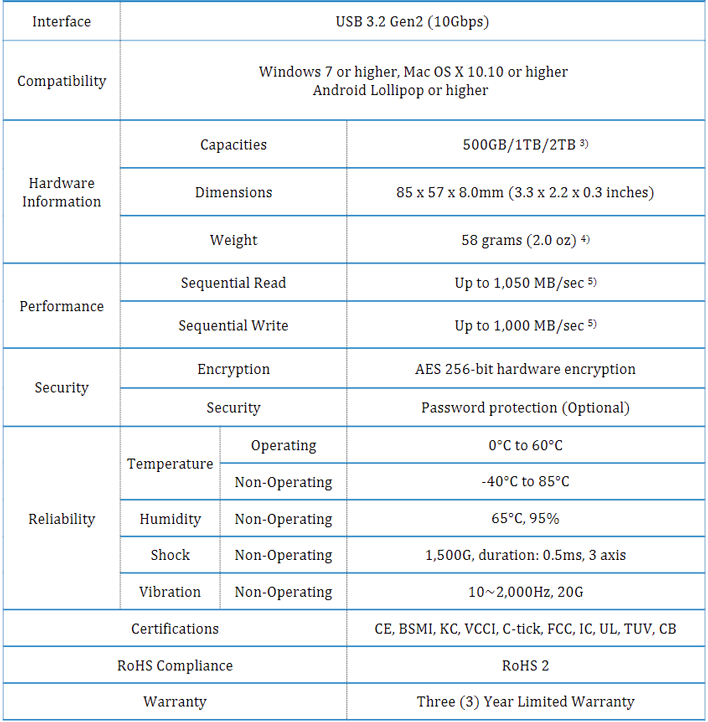 The simply named Samsung Portable SSD T7 lacks the fingerprint reader of the earlier model, but is otherwise a virtual clone. Both devices have the same credit card sized profile and durable enclosure. It measures 3.3 by 2.2 inches with a thickness of just 0.3 inches and has a weight just over two ounces. Both drives are available in 500GB, 1TB, and 2TB capacities with the same peak read-write ratings of 1,050 MB/s and 1,000 MB/s, respectively.


On the inside, the drive PCB is paired with what Samsung dubs an ePCM (encapsulated Phase Change Material) pad to control heat. Samsung indicates this pad helps the skin temperatures remain below 45C under all conditions. While we will not be tearing down the drive today, we will note that at the end of the drive opposite the USB-C port is a sticker concealing two screws for access to the interior. Like the T7 Touch, this drive is not FIPS 140-2 certified and there may not be indication of intrusion if something like heat is used to remove the sticker.


The Samsung Portable SSD T7 is about as plug-and-play as a drive supporting encryption can be. Samsung includes both USB-C to USB-C and USB-C to USB-A cables. While lacking the fingerprint reader of the original, the Samsung Portable SSD T7 still offers AES 256-bit encryption for your files. The only difference is that the device must be unlocked using a passcode in the included  app if encryption is enabled. While locked, the drive presents only a small partition to the user which contains the app installers necessary to unlock it on Windows, macOS, and Android. These drives are not compatible with iOS devices.


Certain Android devices will be unable to read the Samsung T7 SSDs out of the box because they do not support exFAT or NTFS file systems. Our Samsung Galaxy and LG G8 ThinQ phones, for instance, are licensed to support these without issue while our Google Pixel 3 and 3a XL devices are not. Instead, the phones prompt the user to reformat the drive as FAT32 before it can be accessed. We recommend doing this first if you intend to use the drive with Android devices at all. This reformatting process will remove any data stored on the device including Samsung’s own software installers. After formatting, users can re-enable encryption via the Samsung Portable SSD 1.0 app on Android, Windows, or macOS. Keep in mind, the FAT32 filesystem will reduce some functionality, including limiting maximum file sizes to 4GB.

The T7 features the same 92-layer TLC V-NAND flash as the T7 Touch. Both drives lack a DRAM cache, but instead use Samsung's SLC-based TurboWrite cache. The TurboWrite cache helps disguise TLC NAND's poorer performance by first writing to the SLC cache, then later offloading the data to TLC when the drive is idle. This can cause small write speeds to appear faster than read speeds, but performance can degrade when the write-buffer is overrun with large transfers. We will quickly examine performance to see how the Samsung Portable SSD T7 compares to its Touch-enabled sibling and a few other portable options…


How Fast Is The Samsung T7?

To test the performance of the Samsung Portable SSD T7, we enlisted the help of a handful of benchmarks and performed some real-world testing. First up, we have some numbers with SiSoft SANDRA, the the System ANalyzer, Diagnostic and Reporting Assistant. Here, we used the Physical Disk test suite and provide the results from our comparison SSDs. The benchmarks were run on unformatted drives and read and write performance metrics are detailed below. 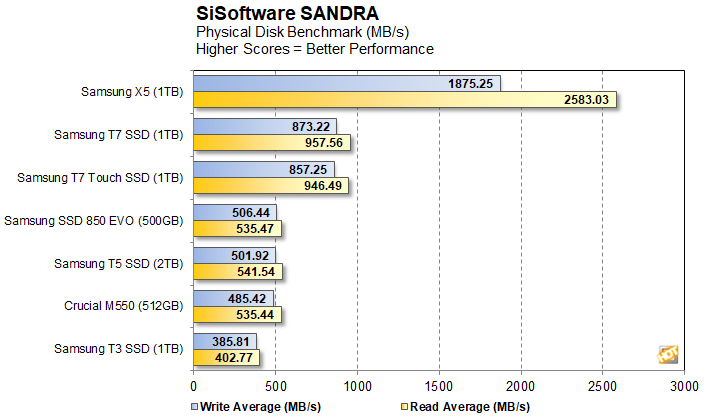 The Samsung Portable SSD T7 shines in SANDRA's quick and dirty read-write tests. It marginally outpaces the Touch variant here, but can be considered within the margin of error. The more important comparison is the T7's near-doubling of the Samsung T5's performance. Naturally, the Thunderbolt 3 based Samsung X5 is much faster still, but at more than double the cost.

ATTO is another "quick and dirty" type of disk benchmark that measures transfer speeds across a specific volume length. It measures raw transfer rates for both reads and writes and graphs them out in an easily interpreted chart. We chose .5kb through 8192kb transfer sizes and a queue depth of 6 over a total max volume length of 256MB. ATTO's workloads are sequential in nature and measure bandwidth, rather than I/O response time, access latency, etc. 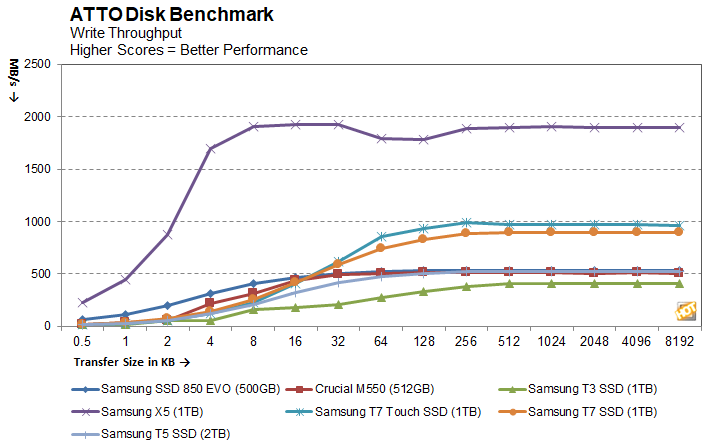 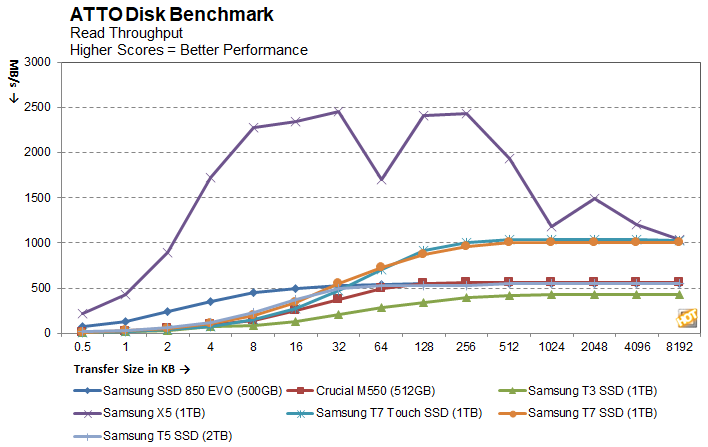 ATTO demonstrates a near-identical performance curve to the T7 Touch as transfer sizes increase. Small transfer sizes have mediocre speeds with these drives, but once files exceed 32K the T7 breaks what we would typically consider to be the SATA-performance barrier (approx 550 MB/s). Both read and write speeds land in the neighborhood of 1000 MB/s as specified. 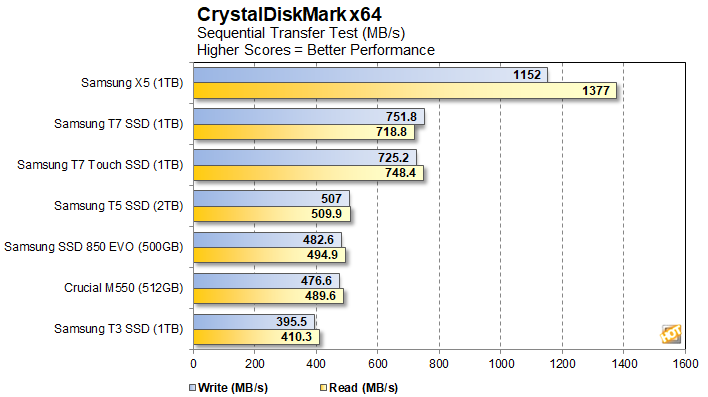 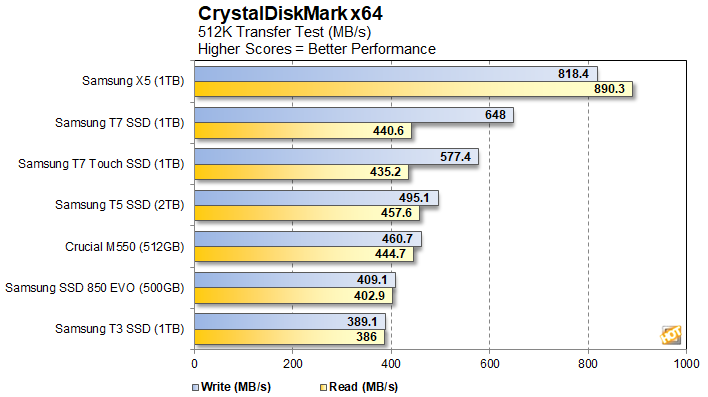 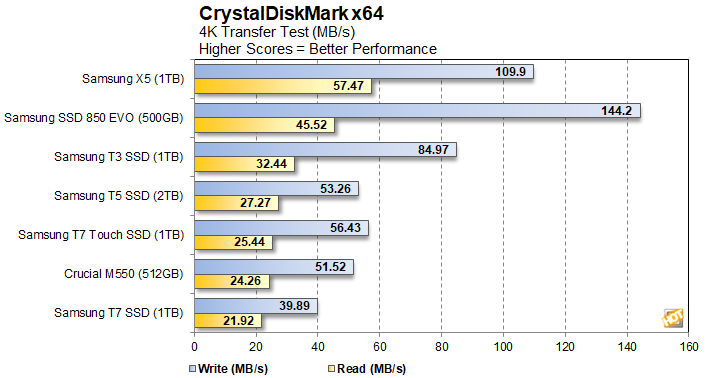 CrystalDiskMark shows the Samsung T7 is slightly better optimized for larger file transfers but delivers lower results in the 4K tests. Higher queue depths (4K QD32) allow the T7 to claw back ahead of the Samsung T5, but only barely.

Finally, EFD Software's HD Tune is described on the company's website as such: "HD Tune is a hard disk utility with many functions. It can be used to measure the drive's performance, scan for errors, check the health status (S.M.A.R.T.), securely erase all data and much more." The latest version of the benchmark added temperature statistics and improved support for SSDs, among a few other updates and fixes. 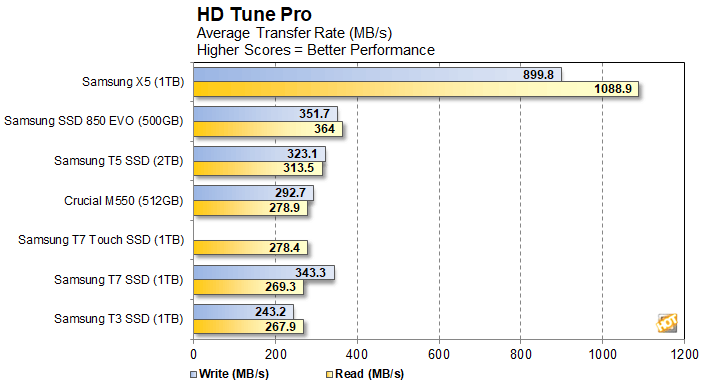 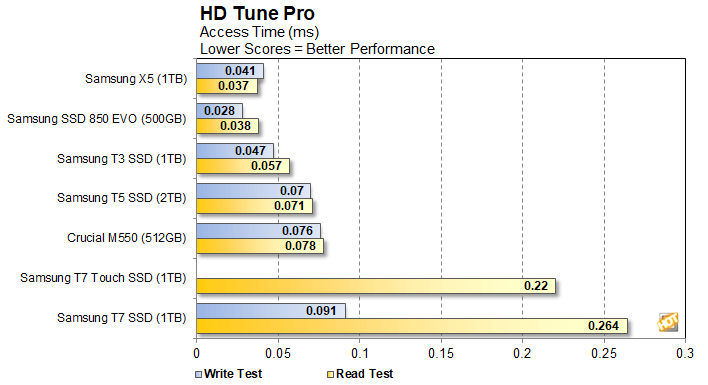 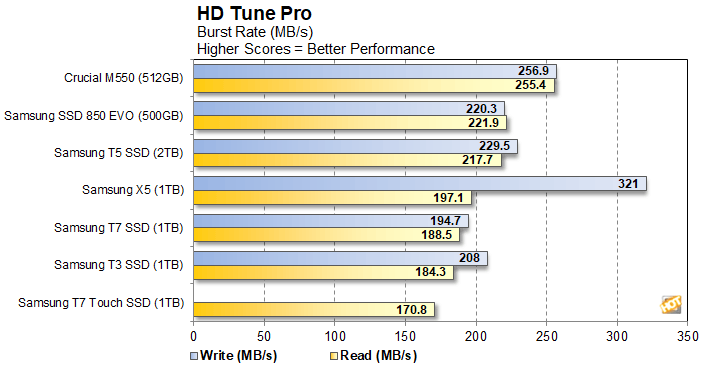 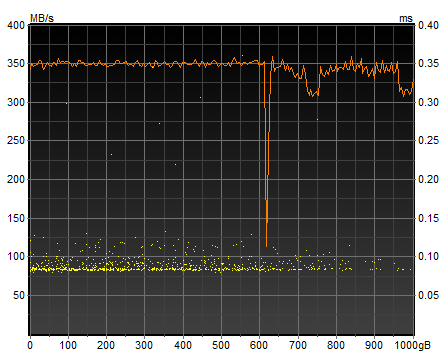 HDTune reveals similar access times to the T7 Touch. In particular, access times for reads are much slower than the other drives tested. In addition, the full drive write graph indicates the SLC cache can be overrun, but only with extremely large transfers. For most use cases, the SLC cache will be adequate, though if you are regularly filling and dumping the drive you may notice some slowdowns. 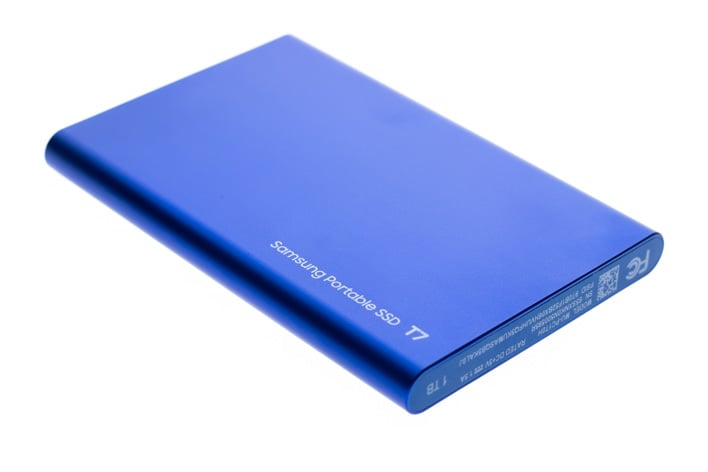 The T7's performance is very good and the small, durable enclosure make it an ideal solution for users looking for a fast, reliable portable storage. Samsung warranties the T7 for 3 years whereas we would prefer a 5 year warranty like most other SSDs, but we understand the shorter warranty period on a portable product like this, that may be bounced around and beat up when on the road.

Nevertheless, the T7's formfactor makes it a convenient option that is easy to carry anywhere. Samsung's onboard encryption further makes security simple. Other options like Bitlocker-to-Go exist, but the lack of cross platform support and more involved setup processes make them less accessible. It is Samsung's total-solution package that makes the Portable SSD T7 a fantastic option for a wide array of consumers.