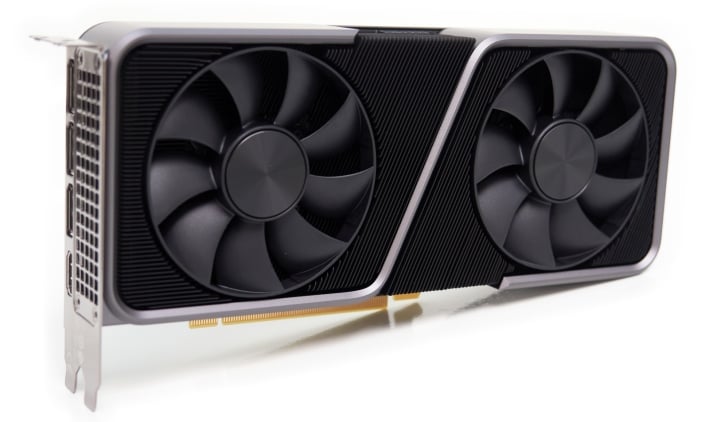 NVIDIA is expanding its line-up of Ampere-based GeForce RTX 30 series cards today, with the relatively affordable GeForce RTX 3070. Although the card was announced alongside the higher-end GeForce RTX 3080 and RTX 3090 during NVIDIA’s GeForce Event hosted by CEO Jensun Huang last month, and was originally due to be arrive a bit sooner, NVIDIA decided to hold off on the official launch until its partners could ramp production and ensure shelves were adequately stocked upon launch. The more powerful flagship GeForce RTX 3080 and RTX 3090 sold out in a blink the moment they became available. While we’re sure NVIDIA would love for the GeForce RTX 3070 to sell just as quickly (what company wouldn’t?), it would also like to ensure that everyone that may want a card, gets one. Though, something tells us that as soon as everyone sees the numbers, RTX 3070s are going to fly off shelves as well, but we digress.

The card we’ll be showing you here today is NVIDIA’s own GeForce RTX 3070 Founders Edition. It shares the same architecture and many design cues with its higher-end counterparts, but the GeForce RTX 3070 Founders Edition is built around a different GPU and targets lower price points. Custom boards will be coming from NVIDIA’s partners as well, but the svelte little bad-boy featured here is all NVIDIA, through and though. We’re sure many of you have been eagerly anticipating this one, so let’s get right to it – up first, a quick video tour, some specs, and then we’ll dive in a little deeper… 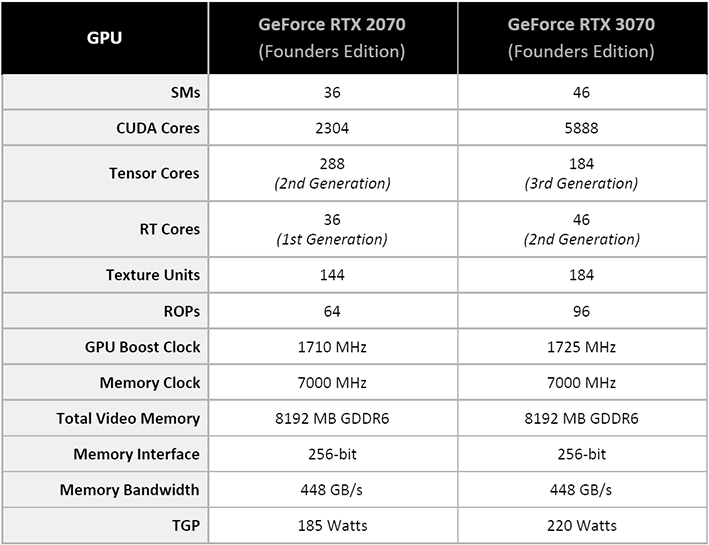 Find GeForce RTX 3070 Cards @ Amazon
The GeForce RTX 3070 shares the same architecture as the other Ampere-based cards in the GeForce RTX 30 series. As such, we’re not going to cover some of the new features and capabilities inherent to Ampere, because we’ve already done so in the past, specifically in our GeForce RTX 3080 Founder Edition review, and NVIDIA GeForce RTX 30-Series: Under The Hood Of Ampere and GeForce RTX 3090, RTX 3080 And RTX 3070 Debut articles. If you somehow missed all of that coverage, pause here and go check out those articles. In them, we explain the changes NVIDIA introduced with Ampere – from its new internal data paths and fresh CUDA, RT, and Tensor cores – along with new features, like NVIDIA RTX IO, NVIDIA Broadcast, NVIDIA Reflex, Omniverse Machinima, and more. The RTX3070's GA104 GPU is also equipped with the same 7th Gen NVENC encoding and 5th Gen NVDEC engine as the GA102. The new 5th Gen decoder supports hardware-accelerated decoding of the MPEG-2, VC-1, H.264 (AVCHD), H.265 (HEVC), VP8, VP9, and brand-new AV1 codecs.

Although the GeForce RTX 3080 and RTX 3090 we’ve previously checked out are more powerful, the RTX 3070 has all of the same features and support for the same technologies. 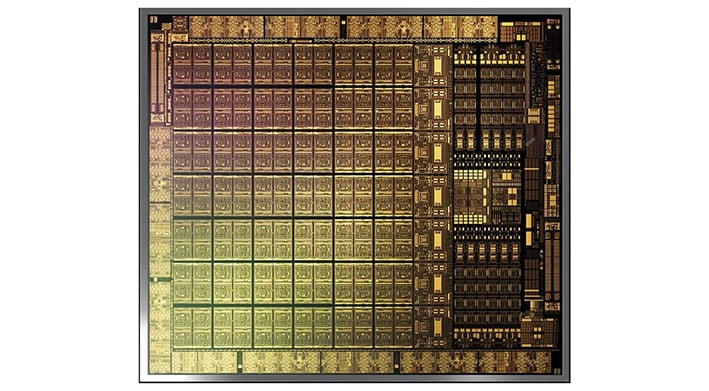 
That said, the GeForce RTX 3070 is not built around the same GA102 GPU. Instead, it features the scaled-down GA104. The GA104 is fabricated on Samsung’s 8nm NVIDIA custom process, is comprised of approximately 17.4 billion transistors, and has a die size of 392.5mm2. Although the GPU in its full configuration has 48 Streaming Multiprocessors (SM), 46 are enabled on the GeForce RTX 3070. 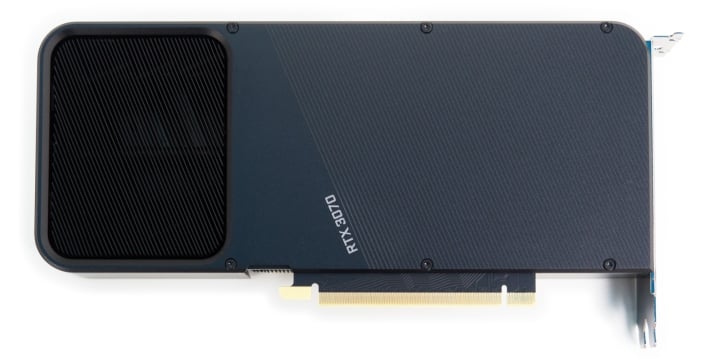 All told, with these specifications, the GeForce RTX 3070 offers up 20.3 shader TFLOPs, 39.7 RT TFLOPs, and 162.6 Tensor TFLOPs of compute performance, with up to 448GB/s of peak memory bandwidth. Versus the previous-gen GeForce RTX 2070, the new GeForce RTX 3070 is massive upgrade across the board, save for its memory capacity and peak bandwidth, which remain unchanged. Efficiencies in the new Ampere architecture allow the GA102 to make better use of that bandwidth, however.

The GeForce RTX 3070’s flow through cooler design also makes the card operate cooler and quieter than is predecessor. NVIDIA claims the cooler is up to 16dBA quieter with 44% better thermal performance than the RTX 2070 Founders Edition. Speaking of the cooler, the one used on the GeForce RTX 3070 FE looks somewhat like the 3080’s, but it has a different fan configuration and it is much smaller. 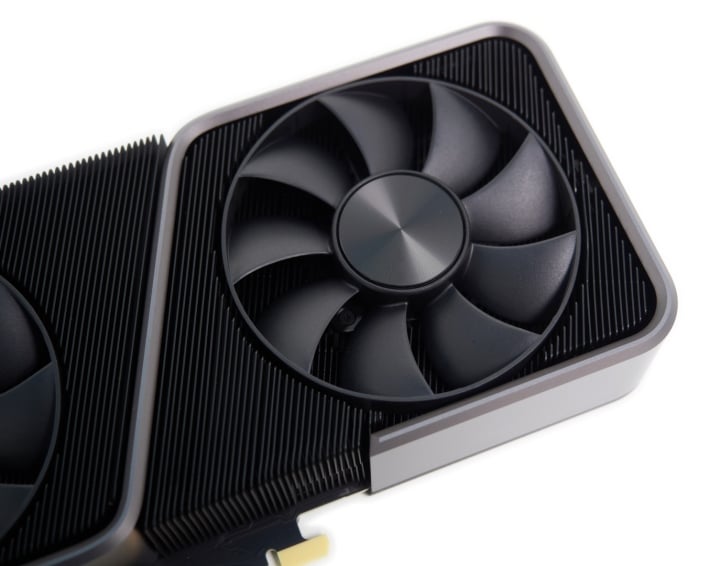 The GeForce RTX 3070’s cooler is outfitted with dual axial fans, and a split heatsink design that allows air to pass completely through the back portion of the card, but both of the fans are on one side – the two fans used on the 3080 are on opposite sides of the card. One end of the heatsink is attached to a vapor chamber, that’s mounted directly to the GPU and memory. The fan above that section directs air through the heatsink and immediately funnels it out of the chassis through large vents in the case bracket. The heatsink on the back half of the card allows air from the second fan to pass through, where it is rises to the top of the chassis and is eventually exhausted from a system, assuming it’s got decent ventilation. 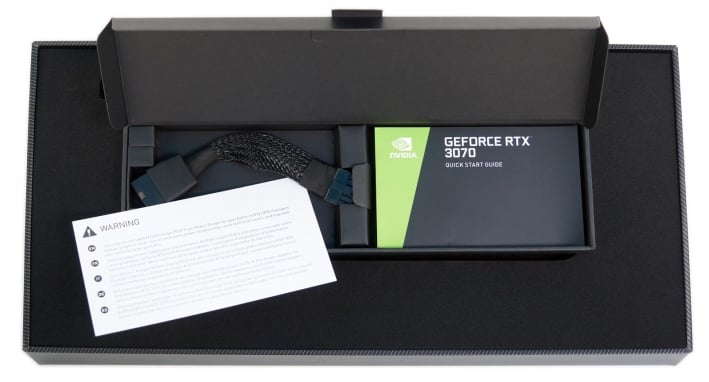 The GeForce RTX 3070 also has short PCB that sports a miniaturized 12-pin power connector, like the GeForce RTX 3080 Founder’s Edition. NVIDIA includes an adapter with the cards that converts a single 8-pin PCIe connectors to the new mini-12-pin design, should you need one. 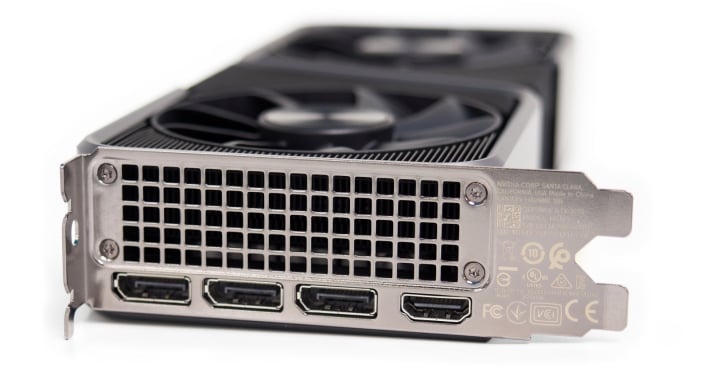 Also like the RTX 3080, the GeForce RTX 3070 has triple full-sized DisplayPorts (1.4a) and a single HDMI output. And that HDMI port conforms to the 2.1 standard, which enables 4K120P with G-Sync on some of the latest OLED TVs and displays, as well as 8K resolution with a single cable.

And now for some numbers...
NEXT PAGE