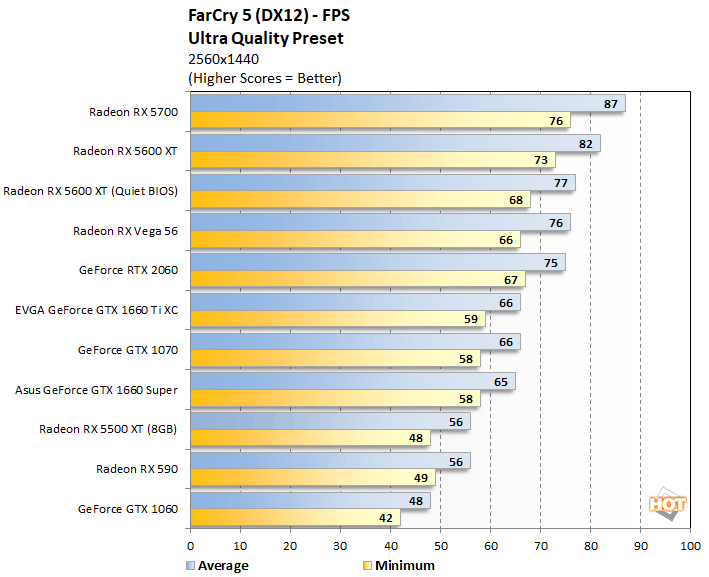 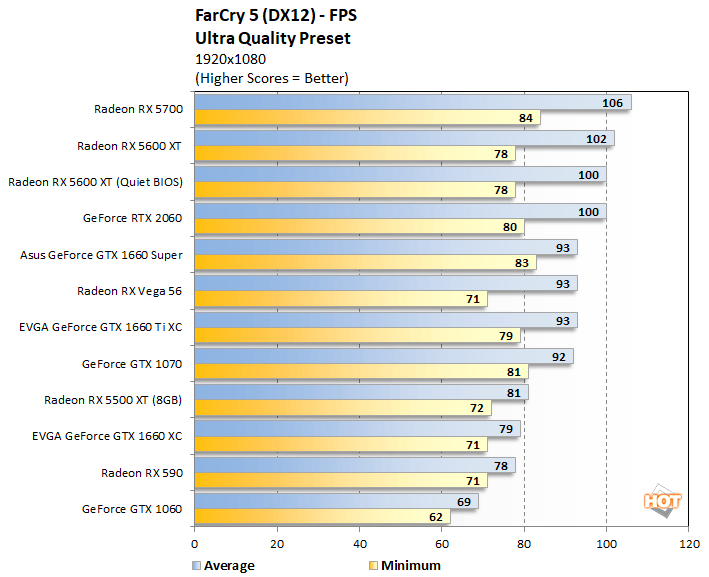 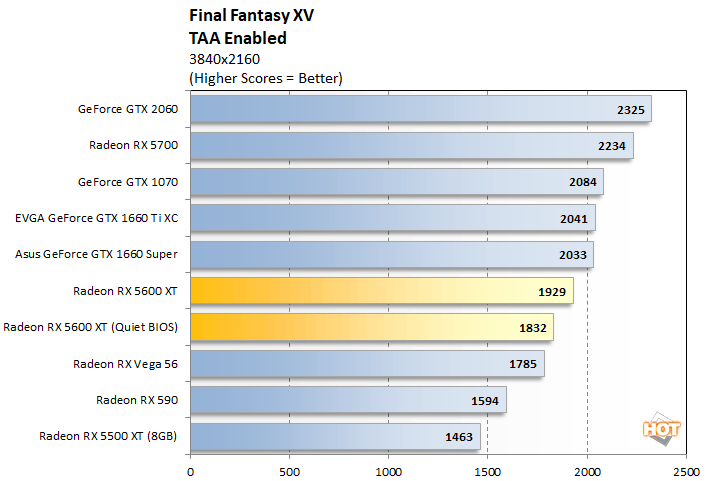 We also spent some time overclocking the Radeon RX 5600 XT using the performance and tuning tools built into AMD's Adrenaline Edition 2020 drivers. Like previous-gen Radeons, when the Navi-based GPU at the heart of this card is boosting, frequencies and voltages scale upwards (power and temperature permitting) based on the GPU's workload and thermal threshold at the time. With the tuning options built into AMD's driver suite though, users have the ability to manually alter frequencies, voltages, fan speeds, and the max power target, to fine tune performance, power, and acoustics. 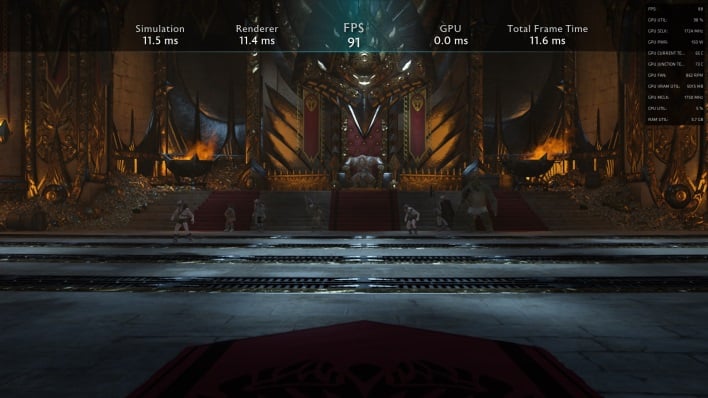 
With previous-generation Radeons, though the GPUs had multiple sensors built-in, a single sensor had been used to determine the GPU temperature and data from that lone sensor was used to control the card's thermal profile. With newer GPUs, AMD has incorporated a network of multiple thermal sensors at strategic locations across the die. Data gathered from this array of sensors is used to determine what AMD is calling the "Junction Temperature", and it's the Junction Temperature that is used to tune the card's power and thermal profiles (the Junction Temperature is effectively the hottest part of the GPU die at any given time). AMD claims the increased resolution and accuracy from the additional thermal sensors allows it to increase overall sustained performance, because throttling based on the Junction Temperature is more reliable and effective. 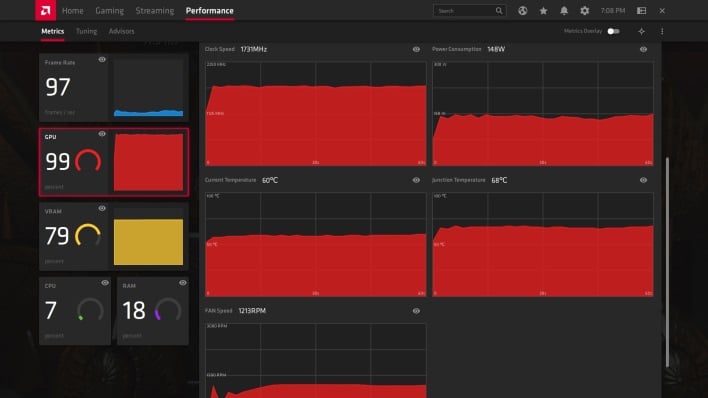 
The tuning options built into AMD's Radeon Software suite offer manual tuning, along with automatic under-volting and automatic GPU and Memory overclocking. Ideally, finding the lowest stable voltage and highest stable memory and GPU clocks, while also increasing the max power target and keeping temperatures low, will yield the best overall overclocking results with a Navi-based GPU like the one on the Radeon RX 5600 XT. 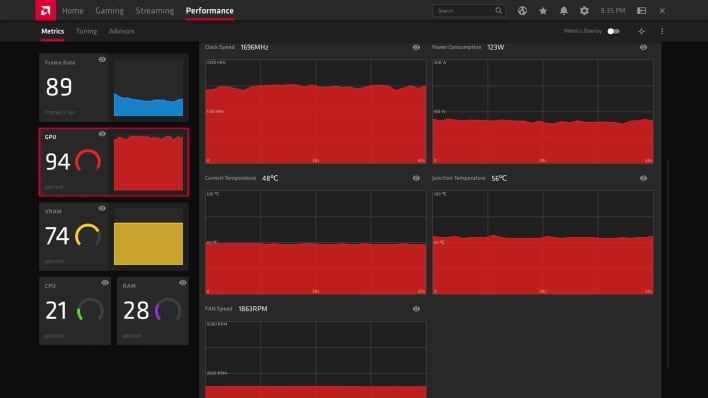 
At its stock settings, we saw the GPU clock typically hovering around the 1,700MHz mark while gaming (give or take, obviously) with the Sapphire Pulse Radeon RX 5600 XT we used for testing. We found that we could easily max-out the memory clock on our card to 1,860MHz (14.8Gbps), and with a mild under-volt to 981mV, a 1,800MHz max boost clock was perfectly stable.  For good measure, we also slightly increased the maximum fan speed to 50% at the upper end of the curve, to ensure temperatures weren't an issue.  In the end, we saw slightly higher, real-world game clocks commonly in the 1,680MHz - 1,733MHz, though it occasionally spiked higher and temperatures remained low, as you can see in the screen-shot above. 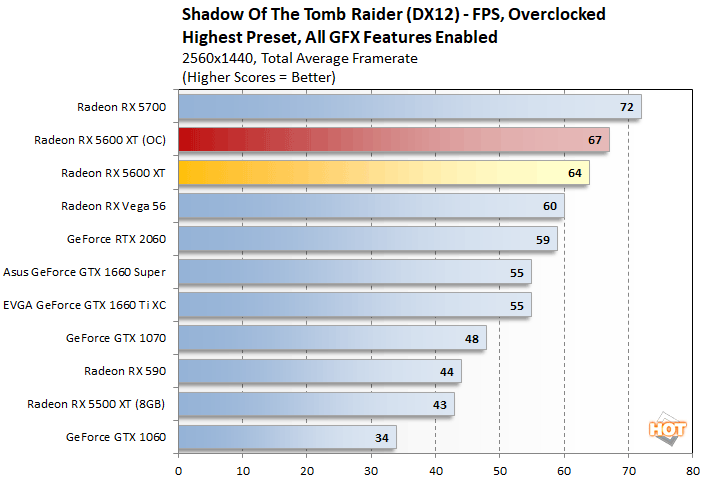 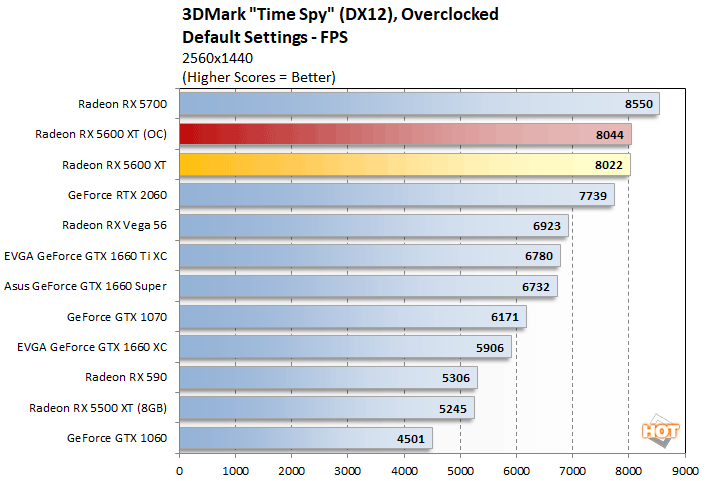 While we had the card overclocked, we saw only a moderate increase in performance in the 3DMark Time Spy benchmark, but Shadow Of The Tomb Raider showed a full 3 FPS increase, which brought the Sapphire Pulse Radeon RX 5600 XT closer to catching the Radeon RX 5700 and extended its lead over the GeForce RTX 2060 in this game. 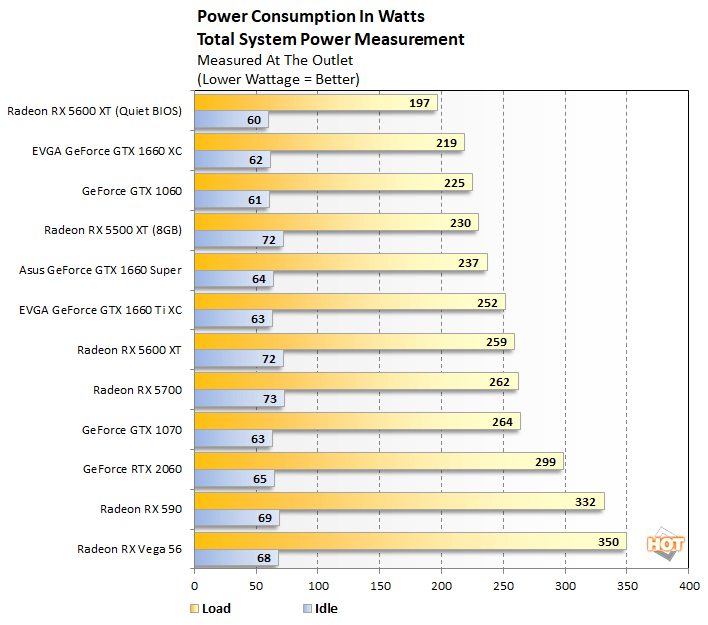 We should also mention that GPU temperatures are not a concern at all with the Sapphire Pulse Radeon RX 5600 XT. At idle, the GPU temps hovered in the high 40ºC / low 50ºC range. And under sustained load, even while overclocked with the stock fan profile, GPU temperatures only jumped up into the mid-70s, according to the Junction Temperature reading in AMD driver suite. Remember, the junction temperature is always higher than the generic GPU temperature under load, but in the case of the Sapphire Pulse Radeon RX 5600 XT, it still remains relatively low. For example, after hours of benchmarking, while looping Tomb Raider, the junction temperature rarely broke the 74ºC mark. 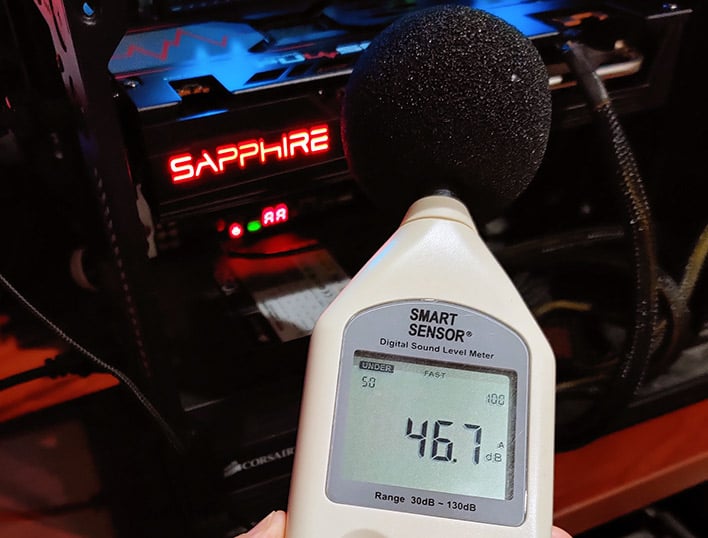 Noise output wasn't an issue with the Sapphire Pulse Radeon RX 5600 XT in its default configurations either. The card was quiet throughout our testing, regardless of the workload. The fans on the card do spin up to barely audible levels when the GPU is warmed-up and under sustained load for a while, but they are very quiet overall and while the card is idling the fans stop spinning altogether. Using the Performance mode BIOS our test system output only 46.7dBA with the sensor only inches away from the card in an open case. While overclocked, with the maximum fan speed manually ramped up to 50%, the noise level crept up to just over 50dBA, which was clearly more audible, but that can easily be brought down considering how low the 5600 XT's temperatures remained, even while overclocked. In short, the Sapphire Pulse Radeon RX 5600 XT is quiet during real-world use.