Acer Predator CG437K: Subjective Use Testing In Productivity And Gaming

We hooked up the Acer CG437K to a desktop PC consisting of an AMD Ryzen ThreadRipper 1950X, 96GB of RAM, 2TB Aorus SSD and Sound Blaster AE-9, and used it daily for work and gaming for the last month. Testing started out with an AMD Radeon VII, but we experienced extremely bad flickering and black screen issues with AMD drivers. It was intermittent at first and became more annoying with each new driver release, unfortunately.

We gave up on trying to get the Radeon VII usable with the CG437K and swapped it out for an NVIDIA GeForce RTX 2070 Super and had better luck with stability, so AMD Vega users beware. We cannot comment on Navi compatibility, however, as one was not available during our testing. Fortunately, the GeForce RTX 2070 Super didn’t exhibit any issues – the only flickering or black screen issue was DRM-related with Hulu. 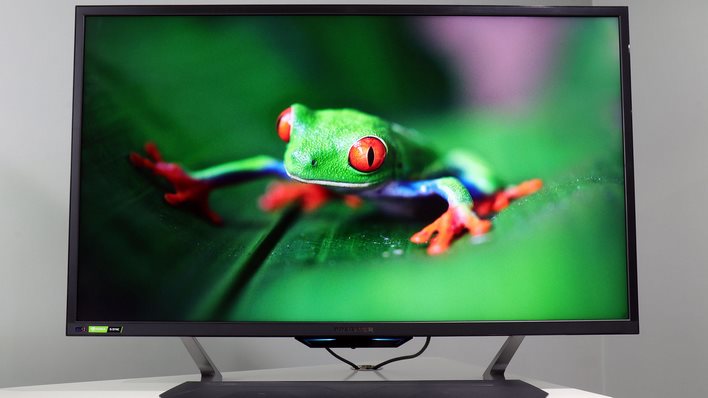 Hardware weirdness isn't the only issue with the CG437K, but it isn’t Acer’s fault. While Windows 10 has gotten significantly better with high-DPI scaling over the last couple years, some oddness pops up from time to time. Windows functions scale perfectly fine, but there’s the occasional glitch where the file open/save dialogue is a fraction of the size it should be; making the text fuzzy like you’re staring at a worn 640x480 CRT. There’s also the HDR problem with Windows 10 that only seems to be present on external displays – SDR content appears washed out as soon as HDR is enabled. There is no tweaking the HDR brightness slider to fix this nor does installing the Acer-provided color profile change anything.  Luckily, you don’t have to keep HDR-enabled on your desktop to play HDR games. Windows still lets games enable HDR via its settings menu. You do lose out on HDR streaming of video without enabling it for all of Windows. This is not an issue we’ve observed with HDR-capable notebooks, however.  And again, this is not an Acer thing, but a Windows thing.

Finally, Since this panel is LED edge-lit, we noticed clouding when a completely black image was onscreen. It wasn’t too noticeable during our time with the Acer CG437K but could be a potential annoyance for someone that constantly views very dark content. There was also slight edge-light flickering with variable refresh rate, occasionally but we couldn’t reproduce it consistently – its something that exhibits intermittently when gaming.


Productivity And The Acer Predator CG437K

Our daily work routine includes spending a lot of time in Adobe Creative Cloud, primarily Photoshop and InDesign, Microsoft Office and having a mess of tabs open in Chrome. We tried to use the Acer Display Widget to split the screen up into three and four quadrants but couldn’t get the hang of it. After using a Samsung 4K UHD TV for the last two years as my primary display, using the Windows key with the arrow keys have become second nature for my personal productive needs. 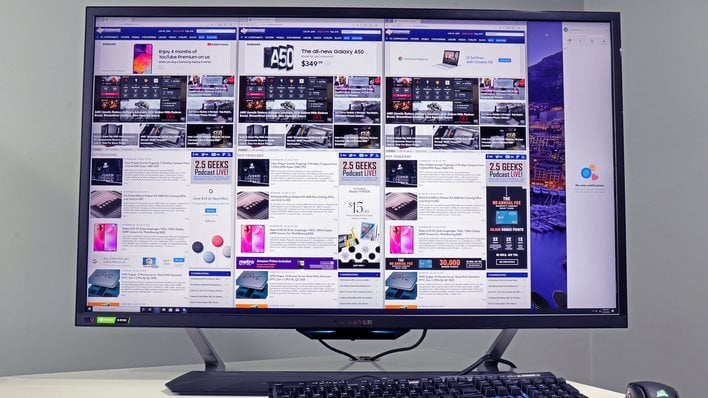 Application usefulness-aside, what really stood out with the CG437K is how bright it can get. Its HDR1000-certification is no joke, the display can max out at blindingly bright levels. I kept the brightness at 25-percent most of the time for my productivity needs. Color performance and contrast is significantly better than our cheap Samsung TV – we can see more shades of each color in graphics and dark scenes don’t look washed out. There’s also the panel response performance that's dramatically better than a TV. The Samsung TV exhibits horrible ghosting and blurring while doing something as simple as scrolling a web page. The CG437K at 4K UHD and 120 Hz is plenty smooth and has zero ghosting that we can perceive. It's really on another level and what specifically separates quality monitor display technology from most TVs.


Gaming On The Acer Predator CG437K

Obviously, you don’t buy a big gaming monitor like this without the need for serious gaming prowess, so we tested the Predator CG437K's gaming chops in a handful of games, including Remedy Entertainment’s Control, Mortal Kombat 11 and Team Fortress 2. Both 144Hz and 120Hz with G-Sync modes were tested at 4K and 1080p resolutions.

Gaming on a 43-inch display while sitting 3.5-feet away is a very immersive experience that perfectly captures our entire field of vision. Remedy Entertainment’s Control is a game that’s best experienced on a large display and the Acer CG437K did not disappoint. While the game doesn’t support HDR, the ray tracing effects and stunning graphics are excellent eye candy on the monitor, even when rendered at 1080p, for obvious performance reasons. Ray tracing does take a toll on performance, but with G-Sync enabled, we didn’t notice any tearing or stuttering at all, it was all fluid. 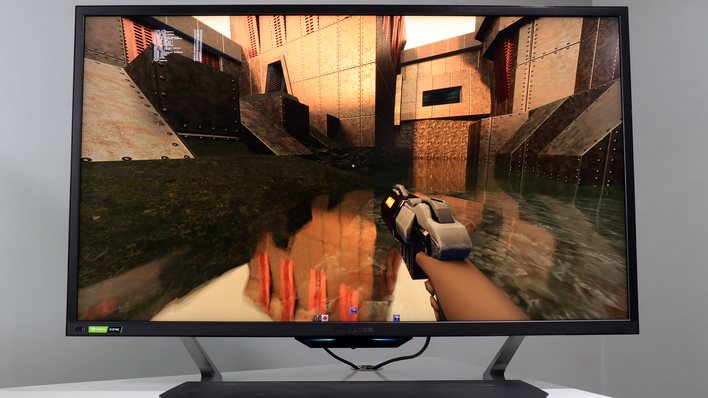 Mortal Kombat 11 supports HDR – just remember to set HDR in the monitor’s on-screen display options to Auto for the game to automatically enable it at launch. After beating MK11's story mode on a regular 4K TV, the CG437K with its insane brightness for HDR is jaw-dropping. The game normally looks good, but it looks incredible on the CG437K. G-Sync simply sweetens the experience even more. It almost makes us want to revisit the story mode just for the visual experience alone.

Team Fortress 2 is an oldie, but one of the few FPS games we occasionally enjoy a few rounds of. Since the game is old, it was perfect to test out the display’s 4K 144Hz mode with. We aren’t the most skilled players at the game, but input response and was excellent and we couldn’t see any ghosting while running around as a Pyro with a flame thrower. Playing at 144Hz didn’t make us any better, but we sure had fun.

Let's wrap it up...
PREV PAGE NEXT PAGE