Acer touts that the Predator CG437K has “looks that kill,” while highlighting its backside stylized with triangular shapes and textures. While we appreciate the effort that went into designing the backside of a monitor, it seems wasted if your desk is up against a wall. In fact, this panel also supports a standard VESA mount, for those inclined to wall mount their monitors and TVs. 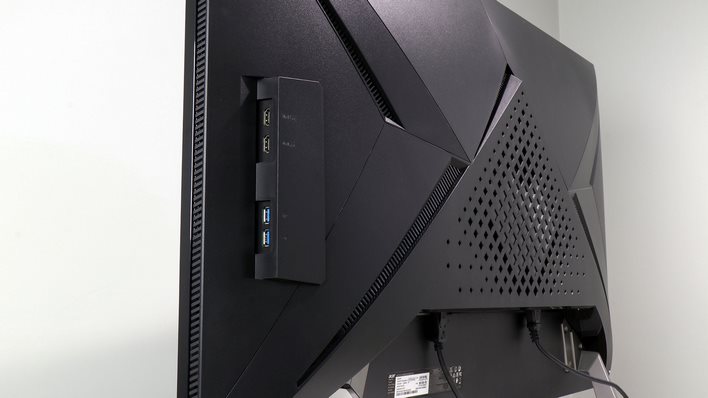 Styling aside, Acer equips the Predator CG437K with an array of inputs that have all your digital devices covered – three HDMI, two DisplayPort and USB-C for notebooks. That’s plenty of connectivity for a gaming PC, notebook, Sony PS4, Microsoft Xbox One and Nintendo Switch. The USB-C port maxes out at 20-volts and 1.5-amps, plenty to charge an ultrabook, but not enough for a single-cable connection to a gaming notebook. You also won't be able to connect a Nintendo Switch directly via USB-C either. The input unfortunately did not trigger the Switch's docked mode, despite supporting DP Alt mode.

Acer places a single HDMI port down-facing on the back panel and two on the side for easy access. The two DPs have a mild caveat, if you want to use it at 144 Hz, both DP connectors must be hooked up to your PC's GPU, which shouldn’t be a problem for most gamers. There’s an integrated USB hub with two ports on the side and two on the back. Only the two ports on the side are USB 3.0 while the rear ports are USB 2.0, unfortunately. 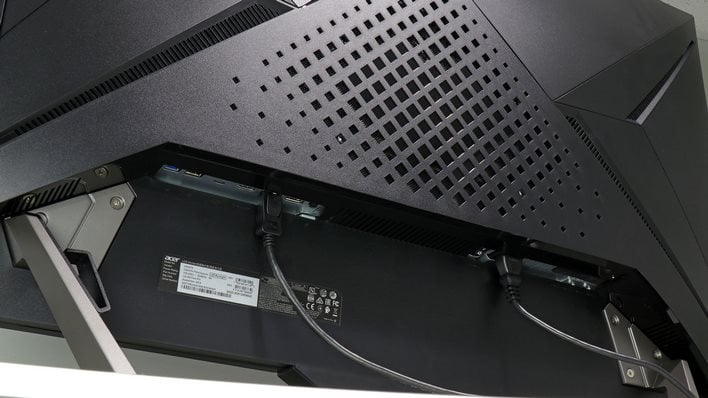 This shortcoming is something we’d typically let pass on more budget monitors, but the CG437K retails for a good chunk of change and this is a questionable design choice on an otherwise high-end gaming display. We found the side USB port placement sometimes inconvenient, too. The side USB 3.0 ports may be inaccessible depending on where you the panel situated. These ports may be out of easy reach on our desk due to the sheer 43-inch size of the Predator CG437K. Additional ports placed below the front bezel may have been a better location, especially for plugging in temporary USB devices. 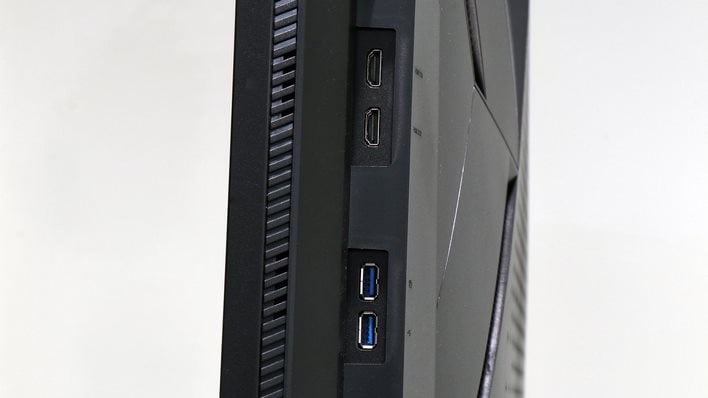 A pair of speakers with 10-watts each are available if you’re so inclined. Despite packing a decent amount of power for integrated speakers, you can only do so much with the little amount of airspace when it comes to audio. While the audio is adequate for basic TV watching and gets loud, it sounds tinny and hollow. Gamers should invest in a good headset or speakers, instead.

The major selling point of the Acer CG437K is the 43-inch 4K UHD, edge-lit LED, VA panel. It’s no ordinary panel that you find in typical TVs, but a gorgeous 4K UHD panel that’s capable of operating at 120Hz natively with a 4,000:1 contrast ratio. In addition, Acer claims up to 1ms response time when run at 144Hz with visual response boost (VRB) enabled for virtually no perceivable ghosting. An NVIDIA G-Sync compatibility sticker is proudly displayed on the front bezel of the display, which is the lowest tier of G-Sync support and means the monitor doesn’t have the NVIDIA-designed G-Sync module. Instead, it supports variable refresh rate (VRR), which is sometimes known as FreeSync, but NVIDIA certifies it for G-Sync compatibility. VRR is supported at 4K 120Hz, with a low frequency range of 48 Hz. Those with AMD GPUs beware, Acer has not submitted the display for FreeSync certification, so results may vary. 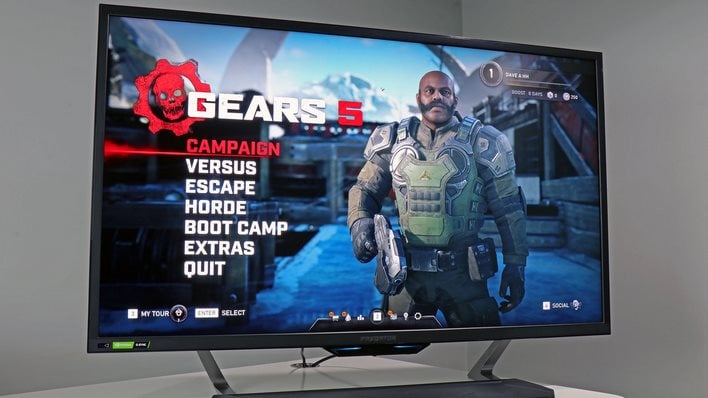 Gaming performance isn’t the only thing the Predator CG437K has going for it either. The display is VESA-certified for DisplayHDR 1000, which means it is an incredibly, blindingly bright 1000 cd/m² and makes HDR-content really pop. That said, you’re forced to choose between 144Hz or HDR with the CG437K, unfortunately. Once you connect the second DP cable and enable 144Hz in the menu option, the HDR and adaptive sync options disappear. 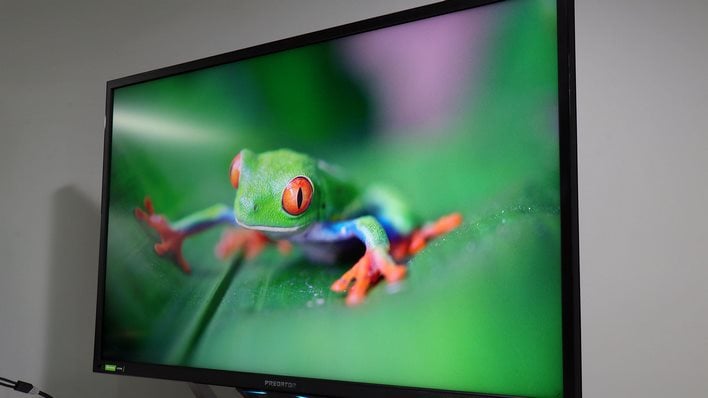 Wide color gamut is supported and the CG437K can display 90-percent of DCI-P3 with an excellent color accuracy of Delta <2. A 178°/178° viewing angle rounds out the impressive feature list, but the panel suffers the typical issues associated with VA panels - you lose noticeable color quality to a bit of wash out with off-axis viewing. However, the monitor is so big that our seating position was always on-axis, directly in front of the monitor. We had to really go out of our way to notice the image quality falling off a bit, off-axis. Regardless, all these features combined make the Acer CG437K a very attractive monitor for work and play. You get a fast panel with incredible response time without sacrificing brightness, color performance or accuracy. And for those that have become accustomed to the productivity of multi-monitor, a 43-inch 4K UHD is roughly the equivalent of four 21.5-inch 1080p monitors in a 2x2 array. That said, you have to be ready to step up to this size of display. If you're used to something in the 32 inches or less weight class, this is a BIG (pun intended) adjustment for the average gamer or power user.


RGB All The Things

It’s 2020 and you can’t have a proper gaming product without RGB lighting support, and the Acer CG437K delivers support for up to four independent LED light strips, which are included with the monitor. There is a caveat with our review unit – Acer included four magnetic LED strips in the box, but there isn’t a metal surface on the back to affix it to, nor was double sided sticky tape included with our review unit. Acer assures us retail units come with single-use, self-adhesive tape to stick the LED lights strips on the backside for that back-side bias light bling. 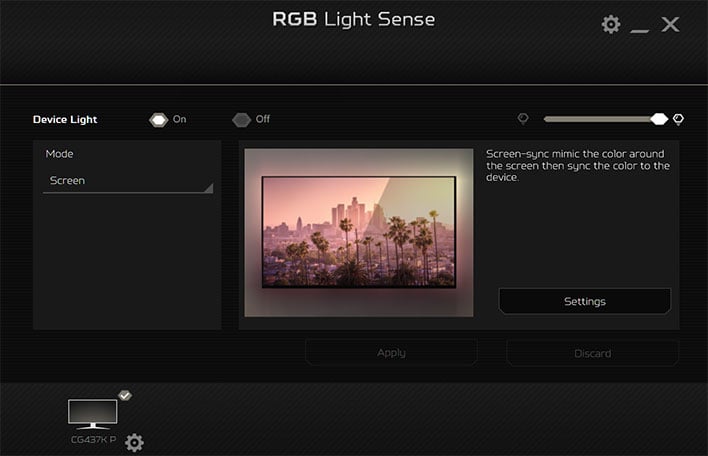 We might be nit-picking but integrating an LED light controller in the monitor and simply tossing in four strips in the box to stick on the backside isn’t the most refined RGB lighting implementation. Considering Acer’s $1499 MSRP ($1199 sale prices currently) and “looks that kill,” sticking LED strips on the back with the accompanying wiring detracts from the aesthetic and we expect greater refinement at this price point. Acer should’ve integrated the lighting into the back panel for a cleaner look, instead of requiring users to clean up a rat’s nest of wires.

Regardless, you can control the RGB lighting via the display’s onscreen display for basic on, off, colors and independent control of each light strip. Downloading the Acer RGB Light Sense app provides greater control of the lighting, including presets, syncing the lighting to music, games and ambient lighting that matches what’s on the screen. However, only League of Legends is directly supported by RGB Light Sense. We tested the Screen lighting feature, which matches the LED lighting colors to what's on the screen and found it more distracting than immersive. The feature does change the lighting to match the screen, but the changes were fast and noticeable instead, not subtle and complimentary. We preferred a static red color throughout our testing.

An optional companion application is available for download from the Acer website – its not mentioned in the documentation, at all, unfortunately. The Acer Display Widget application enables quick selection to the available display modes on the monitor without navigating a bunch of sub menus, and packs a few additional tricks as well.

The Visual Sync function lets users configure the display mode that’s used with a specific app or executable, which is a nicety if you prefer different brightness and color tuning depending on what you’re doing. 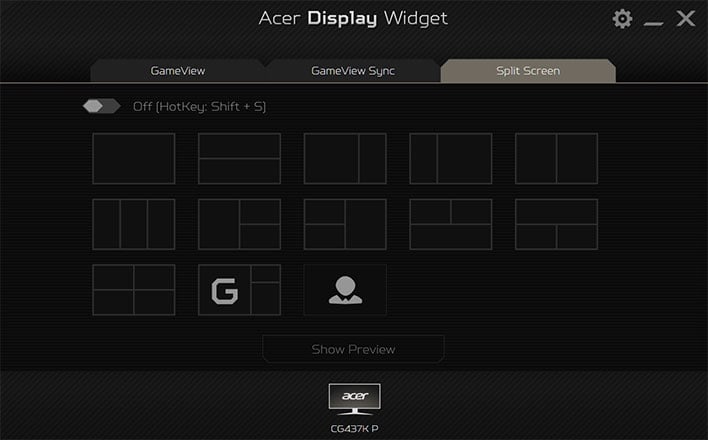 Let's look at performance of the Acer Predator CG437K in a number of different use cases, next...
PREV PAGE NEXT PAGE