Taking photos with a tablet is something of a meme, but out in the field, you get by with what you have. For some that might mean taking a photo with a tablet. On paper, the Galaxy Tab Active Pro has a decent rear-facing camera with a 13-megapixel sensor and an f/1.8 aperture. 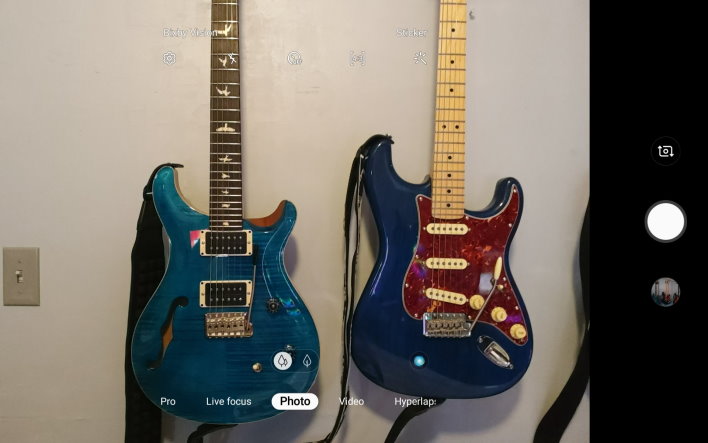 The interface for the Galaxy Tab Active Pro is very straightforward. Along the bottom of the viewfinder, we can select different photo modes, including Live Focus, Pro mode to custom-set exposure and color balance options, video, and hyperlapse, which is another term for time-lapsed videos. Not pictured but also available are Food (square photos for Instagram) and Panorama shots for very wide angles, created by gently panning the tablet left to right to capture a large area. Tap the shutter button to snap a photo, or hold it for a burst taken at a rate of around 10 shots per second. A counter appears next to the shutter to indicate how many photos have been captured in a single burst.

Now let's take a look at some crops from photos taken with the Galaxy Tab Active Pro camera. Click any image to see the 100% scaled cropped image. 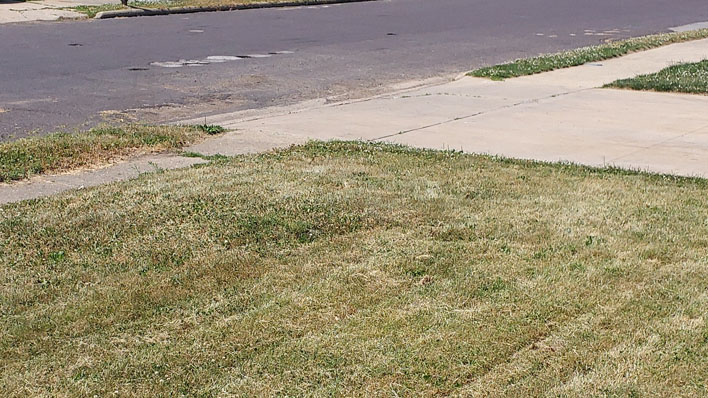 The most well-lit scene we'll look at in this article is my dead grass, and unfortunately it's pretty blotchy. The camera compressed the image so much that all fine detail is gone. While that's unfortunate, it's not unexpected on a tablet camera. Highly compressed photos save space on the device and these things weren't really meant to be cameras in the first place. Let's go inside and take a nicely-lit room and then turn out the lights. 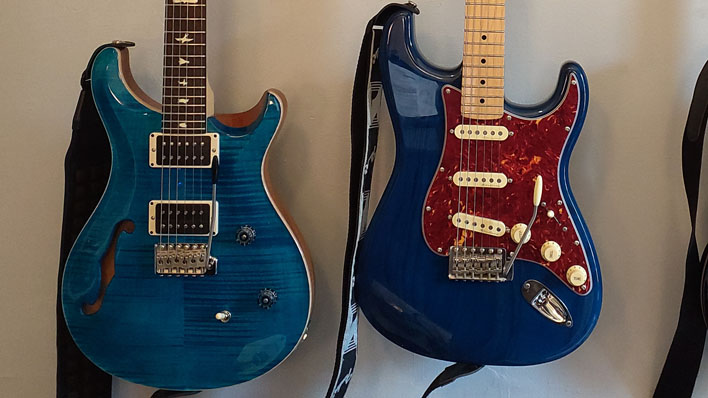 The striped pattern on the PRS CE 24 Semi Hollow (left) looks pretty rough even with the lights on. 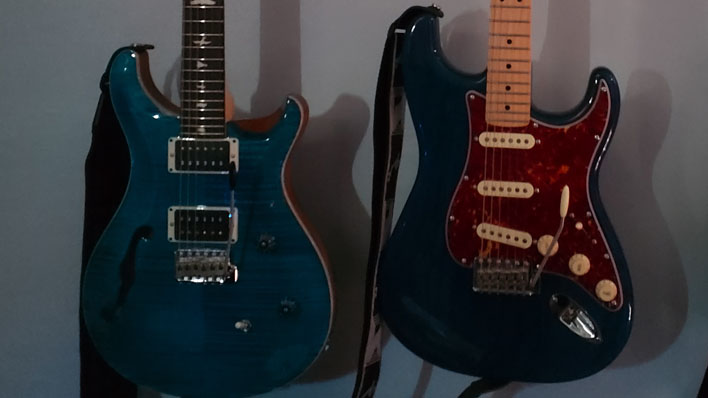 The lights are off in this photo, but there's more ambient light than the Galaxy Tab Active Pro lets on

With the lights on and some sunlight leaking through our office curtains, the guitars are defined well enough, but looking at the full-sized crop, there's still not a lot of detail. That guitar on the left has a beautiful flamed maple cap, but the Galaxy Tab Active Pro loses a lot of the fine details. Once we turn out the lights, however, the pictures get really ugly really fast. It's not nearly as dark in the room as the second photo makes it seem. 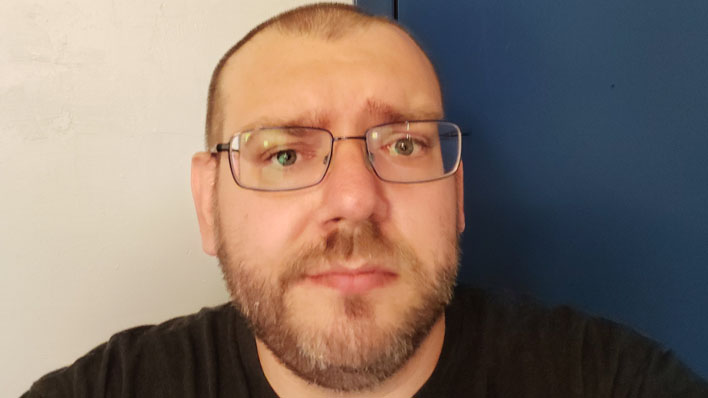 My name's Blurryface and I care what you think

Remember, though, cameras have other uses than capturing photos. Scanning bar codes and QR codes requires a camera, for example, and it doesn't need to produce great photos to extract data from a code. That 8 MP front-facing camera also does a decent job in video conferencing software. Tablet sensors aren't going to replace discrete cameras, and in this case, it's not likely to displace even our phones, but it does enough to get by.

The Galaxy Tab Active Pro's midrange Qualcomm SoC doesn't necessarily match up well with the latest flagship devices, and it doesn't have to. The purpose of this tablet is to perform some specific business tasks, whether it's in Chrome or in native apps from the Google Play store. With that in mind, we limited our testing to productivity benchmarks.

Geekbench has been a go-to benchmark for us for a long time, since it puts a CPU through the ringer on a host of intensive routines. The latest version of Geekbench has aligned its scores with Geekbench 5 on the desktop side, though comparing a low-power SoC like this to an x86 monster seems kind of unfair. We've still got a pretty big cross-section of devices represented, though, so let's see how the Galaxy Tab Active Pro fares. 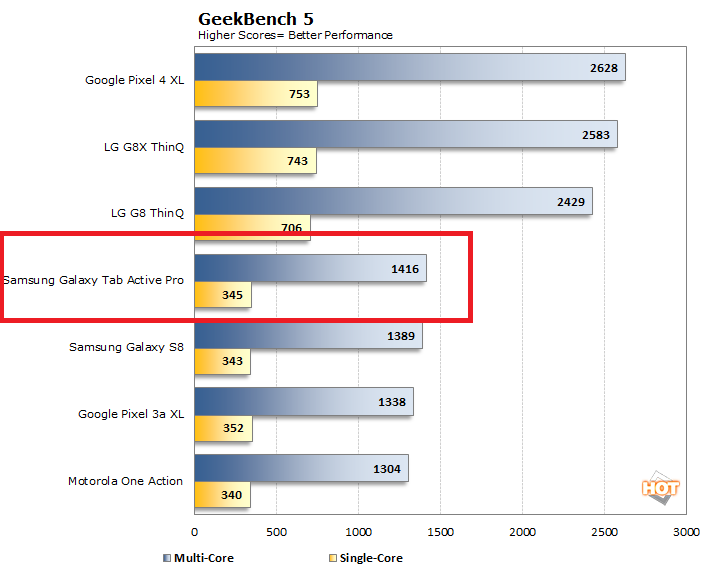 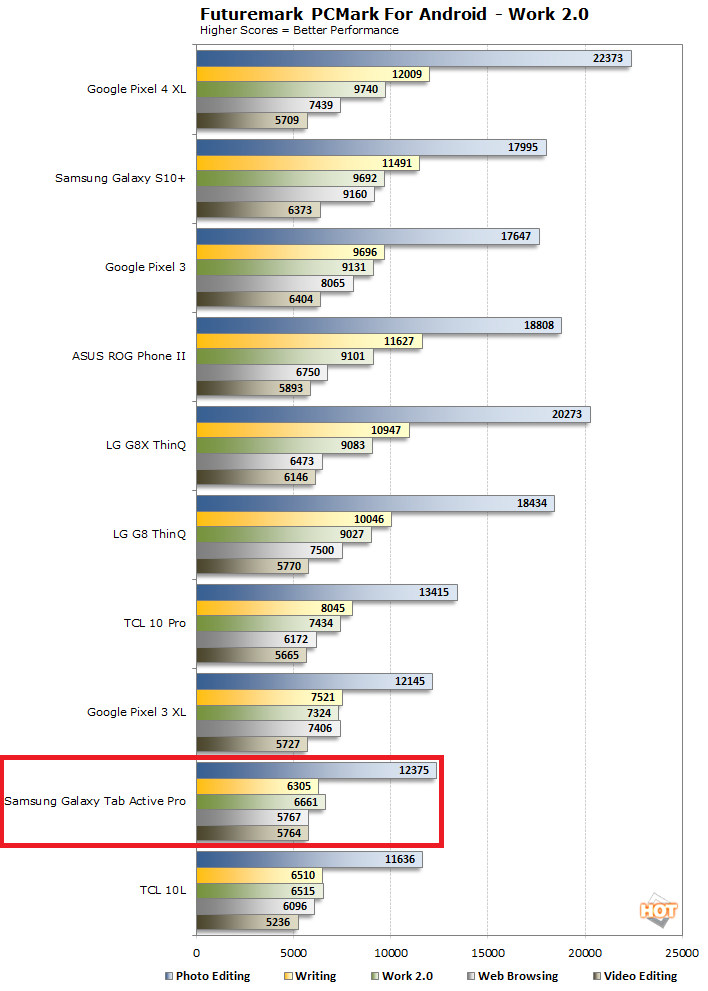 The Galaxy Tab Active Pro is pretty close to the bottom on this firsts chart, and doesn't score particularly well on any individual test. Part of that is a function of the fact that we've had a big influx of high-end smartphones in recent years, with few tablets. However, it does seem to keep up within 10% of one flagship from yesteryear, the Pixel 3 XL. Otherwise it's buttressed on our charts by the pair of entry-level TCL phones.

AnTuTu 8 tests a variety of subsystems and returns a pretty elaborate set of data for each test. In this case, we tested with the latest version of AnTuTu across an all-Android platform group. AnTuTu 8 returns four top-level performance metric results that included here: CPU, RAM, 3D, UX (or User Experience), along with a total score. Because the scores are so finely segmented, this test should showcase the Galaxy Tab Active Pro's strengths and highlight its weaknesses. 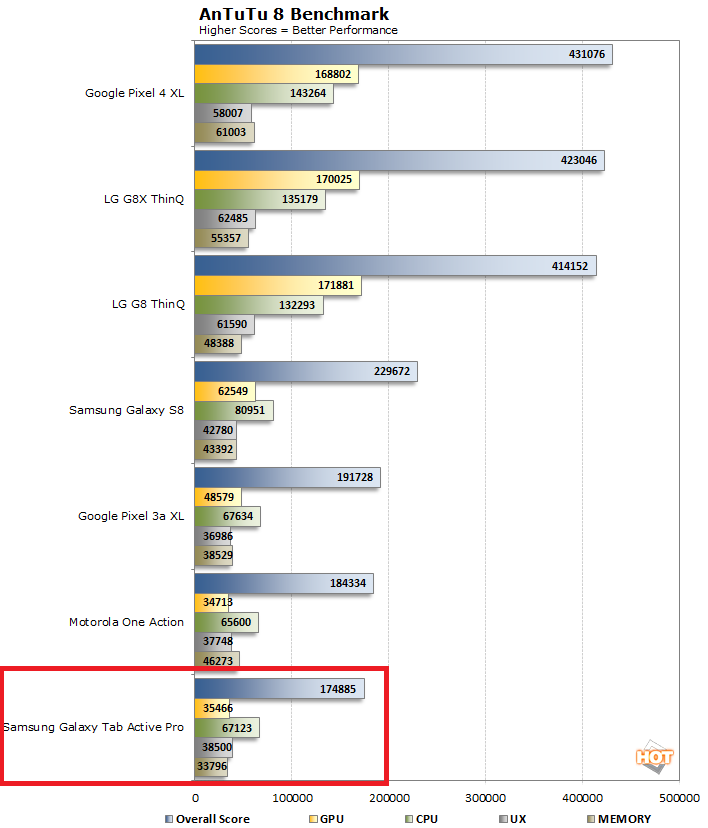 Once again the Galaxy Tab Active Pro is at the bottom of the chart. On just the CPU test, it's faster than the Motorola One Action and just about on par with the budget-minded Pixel 3a XL. As we climb up towards flagships of years gone by, like the Galaxy S8, it's no longer particularly close.

JetStream is a pretty robust browser test that examines CPU performance on interpreted JavaScript for audio and image processing and a host of other web-related tasks. For each device, we used the latest available version of Chrome and allowed the battery to complete three full passes. 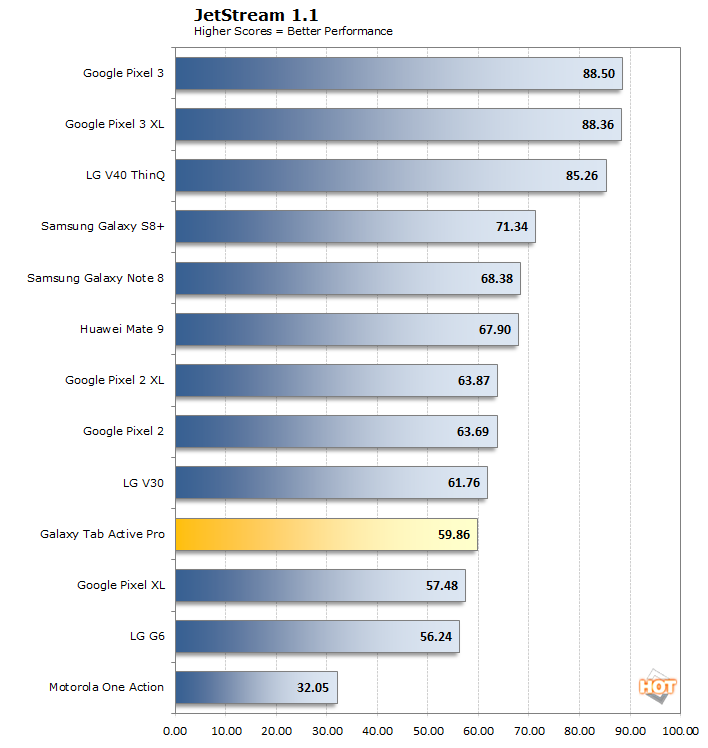 As it turns out, web performance on the Galaxy Tab Active Pro is decent. Scoring near 60 does happen to put this tablet on par with lower-end devices, but it's twice as fast as the Motorola One Action. While actually browsing the web, some sites did feel a bit sluggish.

Google search was pretty fast, but catching up on Reddit and Twitter weren't all that smooth. You'd be better off with the native applications, as even if they're using HTML5 tools like Electron or React Native, they're almost certainly using lightweight pages with a mobile focus. While we haven't officially tested any other Android devices with BrowserBench.org's Speedometer 2.0, Chrome on the Galaxy Tab Active Pro scored 29.7, which is about half as fast as other ARM devices we have tested, like the Surface Pro X with Edge.

To test battery life, we ran the PCMark Work Battery test. To make sure that scores are even across the board, we calibrated the displays on each device to as close to 200 lux as we possibly could and turned off any ambient light correction there might be. Despite the relatively low brightness of the Galaxy Tab Active Pro, which maxed out for us around 350 nits, this was around 25% brightness on the slider.

Our PCMark Work battery scores reported below are figured in minutes of battery life. This will be the true test of the Galaxy Tab Active Pro's relatively large 7,400 mAh battery. Because of its user-replaceable nature, businesses could procure multiple batteries and swap them out after the system shuts down, or replace a battery that no longer has sufficient capacity. 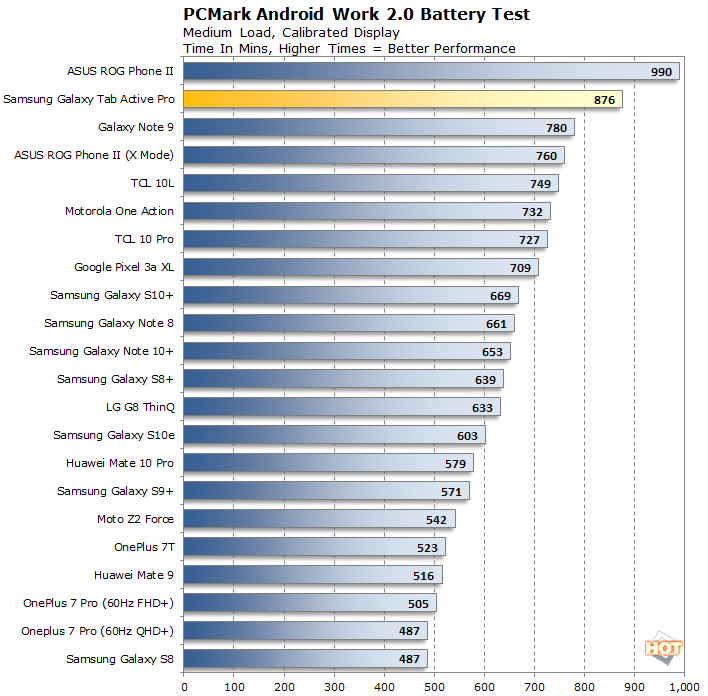 Battery life is, in a word, superb. The SoC inside the Galaxy Tab Active Pro is geared towards low power consumption, and as a result the battery in this thing lasts darn near forever. Over 14 hours of uptime running the PCMark Work suite is no small feat. The very best battery life among phones requires a pretty big juice pack. The only device that can outrun the Galaxy Tab Active Pro, the ASUS ROG Phone II, has a 6,000 mAh battery but a much smaller screen to light up. This result is almost assuredly why the company chose to go with a lighter processor. Productivity plummets when batteries die. 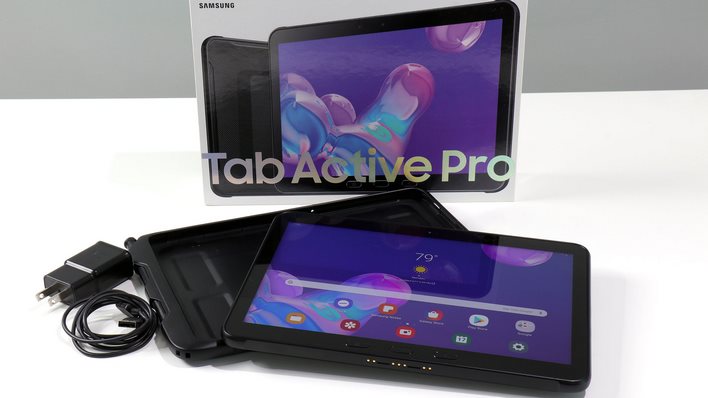 Overall, the Galaxy Tab Active Pro is an interesting business-class device. Targeted at employees on the go and in potentially harsh environments, the tablet's MIL-STD-810G spec rating should ensure that it can survive the job. It won't matter if it's on a factory floor or rumbling around in a delivery truck or school bus, Samsung designed the system to survive taking a beating.

There's enough processing power to make sure that the system can handle any work task that gets thrown its way, too. The Qualcomm octa-core processor's two high-performance cores turned in decent enough performance on lightly-threaded tasks, while the six power-efficient cores should be sufficient to handle background tasks. As our test results proved, it's not going to set the world on fire, but it doesn't have to. World-beating performance is secondary to the companies that line up to purchase this sort of tablet.

Still, at $600+ we do have some nits to pick. The Galaxy Tab Active Pro routinely turned in performance at about half that of flagship smartphones of yesteryear on CPU-intensive tasks. Our time browsing the web resulted in some sluggish performance. Even in our JetStream web compute test, where the Samsung tablet had its best relative performance, it trailed flagship phones from 2018 by a significant margin. The 4 GB of memory is also adequate, but not nearly as much as many fast smartphones ship with these days. The camera results are also pretty lackluster, too. However, for video conferencing and barcode and QR scanning, it certainly does get the job done.

Samsung included some interesting software features with the Galaxy Tab Active Pro. DeX ships on the company's smartphones as well, but on a tablet we see a pretty unique opportunity to integrate the desktop with a tablet. Citrix's Intelligent Terminal software goes a long way towards that by giving employees on the go access to software they might not otherwise be able to access.

The Galaxy Tab Active Pro hits its targets well. Businesses in the market for a rough-and-tumble tablet with enough performance to get the job done, optional 4G LTE connectivity, and a body that takes a licking don't have a lot of options. Fortunately for them, however, Samsung's rugged tablet ticks off those boxes and do so with some flair.