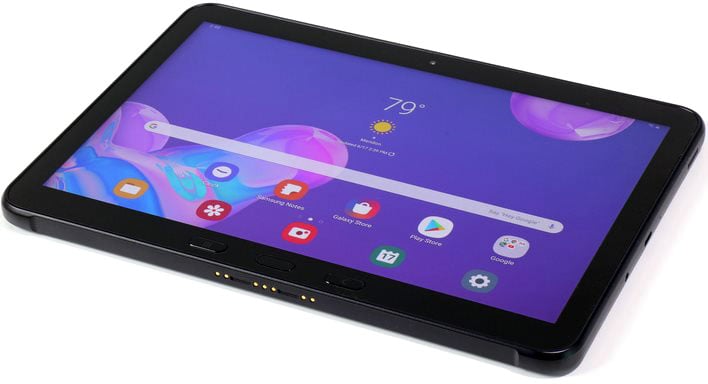 Personal electronics take quite a beating. Think for a moment about all the places your smartphone can end up: on top of the car, buried in a bag, shoved into a pocket along with keys, tossed on a seat where it may bounce off and hit the floor, and so many other situations. Just like a phone, a tablet can end up in a lot of those same places, too. Environmental factors come in to play for users who are active as well, be it in a delivery vehicle, on a factory floor, or as a first responder in a vehicle. In those situations, the peace of mind brought by paying for extra-durable devices can be totally worth it. 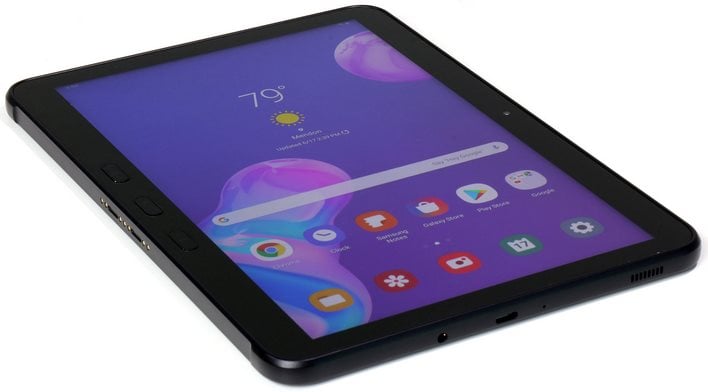 Samsung says that the Galaxy Tab Active Pro has an octa-core SoC that runs at up to 2.0 GHz, but doesn't specify exactly which in its specs. According to both AnTuTu and Geekbench on the device, the SoC in question is the Qualcomm Snapdragon 670 SoC with a pair of 2 GHz Kryo 360 Gold cores and six 1.7 GHz Kryo 360 Silver cores. The pair of Kryo 360 Gold cores should be plenty of oomph for lightly-threaded performance sensitive tasks like browsing the web and running the vast majority of apps. Meanwhile, six Kryo 360 Silver cores should be more than enough to handle background tasks.

While the Galaxy Tab Active Pro isn't exactly a gaming device, the built-in Adreno 615 graphics should be enough for most games without a lot of stuttering or jank. 4 GB of LPDDR4x memory back the SoC, which doesn't sound like much in an age of 8 GB and 12 GB smartphones, but should still be adequate for a decent amount of multi-tasking. For primary storage, the Galaxy Tab Active Pro relies on 64 GB of internal flash along with a micro SD slot for additional space.

There's plenty of network connectivity in the Galaxy Tab Active Pro. The device supports 802.11ac Wi-Fi on both the 2.4 GHz and 5 GHz band and Bluetooth 5.0 with the Advanced Audio Distribution Profile (A2DP) for high quality sound. While our test unit doesn't support it, Samsung does have a version of the Galaxy Tab Active Pro with 4G LTE cellular connectivity, too.

Samsung gave the Galaxy Tab Active Pro a pair of cameras, with one on each side of the tablet. While taking photos with a tablet can look downright silly to the casual observer, the rear-facing camera looks pretty solid on paper with its 13 megapixel sensor and wide f/1.8 aperture. The front camera is no slouch, boasting an 8 megapixel sensor and a slightly narrower f/2.0 aperture. Both sensors should have no problem gathering light, but we'll test it in dimmer scenarios.

Since the Samsung aimed the Galaxy Tab Active Pro at professional markets, it has a suitably large battery. The unit in our test unit was rated at 7,400 mAh at 3.8v, which works out to 28.12 Watt-hours. That's not quite as big as the typical ultrabook battery at around 50 Wh, but we're not trying to drive a 15W Intel Core processor, either. The battery life in the Galaxy Tab Pro Active should be pretty solid, but there's only one way to find out. Hint: it's on the next page.

Externally, the biggest eye catcher is all the effort that went into making this device rugged enough to meet the MIL-STD-810G specification. This means that the tablet meets certain criteria, for example, it can survive extreme temperatures, dust, shock, vibration, and low pressure/high altitude usage. As part of that certification process, the Galaxy Tab Active Pro also has an ingress protection rating of IP68, which means it can withstand 1.5 meters of water for 30 minutes and is dust resistant.

Secondly, the Galaxy Tab Active Pro has physical hardware buttons, just like the AT&T exclusive Galaxy Active smartphones. The hardware buttons are in Samsung's default configuration, which differs from stock Android by putting the back button on the right and the multi-tasking button on the left. If you've ever used a Samsung phone before, this should be familiar, but users of just about any other Android phone will have a little bit to get used to. Anybody who's used a touch screen with gloves on knows these buttons are pretty handy. The home button also doubles as a fingerprint reader for the only form of biometric authentication in the tablet. This hearkens back to the days when the fingerprint reader was on the front of many Galaxy S phones like the Galaxy S5 and S6. Below those hardware buttons sits a set of pogo pins for use with some third party add-ons like docks and mounts.

In the box, Samsung includes a polycarbonate case that the tablet slips into easily. Holstered in that case is an S Pen which carries the same IP68 rating of the tablet. The S Pen is an active stylus that connects via Bluetooth, but if the battery dies it can still be used for writing. The Bluetooth features like hover do need the battery. The lack of battery also means that there's no Bluetooth connection or Air Action compatibility like the Note 10, though. For the target audience, we think skipping those extra features and excluding the battery was the right call. The S Pen itself is a solid stylus about as large as a nice ballpoint pen.

The tablet itself is made from a matte textured polycarbonate body like the case. Hearkening back to the Good Old Days, the Galaxy Tab Active Pro has a pop-off back cover, which grants access to a user replaceable battery and micro SD slot. Since this device is targeted at businesses, having a user-replaceable battery should extend the usable life of the device should the juice pack go south. What's unfortunate is that seemingly every flagship smartphone followed Apple's lead and denies the same experience to consumers. We like it the serviceable battery in the Galaxy Tab Active Pro an awful lot, though.

The 1920x1200 display on the Galaxy Tab Active Pro is an IPS panel with 10-point touch responsiveness, and as a result the viewing angles are nice and wide. The display gets pretty bright indoors, measuring 350 nits at maximum brightness on our light meter. However, that's not really bright enough for outdoor use without being in the shade. Since the hardware buttons are present on the tablet, none of the screen real estate is lost to a wide navigation bar at the bottom of the screen. Bixby is present on the tablet, but not assigned to any hardware buttons by default. 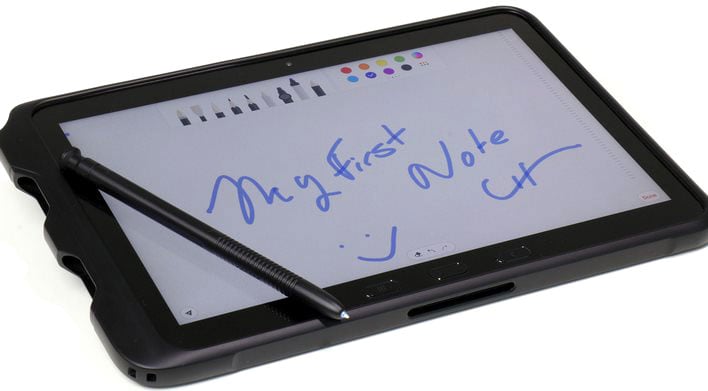 Above the display sits an 8 megapixel front-facing camera for taking selfies or (perhaps more likely, on a business device) streaming video for video conferencing apps. We'll examine still performance later on, but for video conferencing this does the job. The image isn't particularly sharp but it's certainly enough to get by in a WebEx meeting. Around the back is a 13-megapixel camera for taking stills or video up to 4K at 30 fps or 1080p at 60 fps. The microphones on the Galaxy Tab Active Pro do a decent job of capturing the environment on video, and canceling out background noise in video calls when used with the front-facing camera. For audio playback, the tablet has a single speaker on the right side, when holding the tablet with the front-facing camera on top. It works for video conferencing, but not much else. Fortunately, there's also a headset jack for typical four-pole analog headsets.

All of the side buttons are on the same edge of the Galaxy Tab Active Pro as the camera, so changing the volume or waking the display is all along the top edge of the device. There's a fourth button here, dubbed the Active Button, which is programmable and can launch two apps. Unlike the Bixby button on the Galaxy S smartphone lineup, this button is fully programmable. By default tapping it will launch the camera, and long presses will open the calendar, but either of these actions can be tied to any of the apps on the system.


Software Experience with Android 9 and One UI

On the software side, the Galaxy Tab Active Pro runs Android 9 Pie with Samsung's One UI. With a public unveiling of Android 11 right around the corner and given the premium price of this tablet, it's a little disappointing that the OS hasn't been kept totally current. Still, the OS is plenty modern for just about every app and use case, since many Android app developers are stuck supporting Android 6 Marshmallow just to make sure that their apps will run on the largest number of devices. 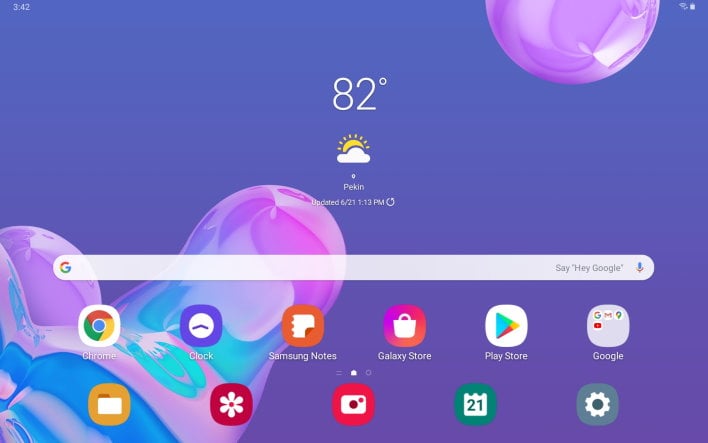 The default Home screen of the Galaxy Tab Active Pro

Anybody who's touched a recent Samsung phone knows that One UI is pretty solid. While Samsung does make its own customizations to Android's user interface, those changes not as heavy-handed as they used to be in TouchWiz. The stock launcher is swift and smooth to navigate, and apps launch pretty quickly. The Galaxy Tab Active Pro has a built-in selection of no-nonsense applications without unnecessary always-on bloatware. A couple of important apps for business users are DeX, the Knox security platform, and Citrix Intelligent Workspace.

The Galaxy Tab Active Pro also supports Samsung DeX, the desktop PC-style interface for Android devices. Samsung supports DeX through a variety of first and third-party accessories, including keyboard cases, mutli-port adapters, and HDMI cables. DeX can also mirror the tablet's display to another computer using an application for Windows and Mac OS. Even without DeX, the software keyboard has some extra tricks that the stock keyboard from Google doesn't have, like a Control key. Hold Ctrl on the keyboard and access several common keyboard shortcuts, like Ctrl+A to select all, Ctrl+X and Ctrl+C to cut and copy, and Ctrl+V to paste. Typing directly on the device using the touch display is a pretty good experience overall, considering the lack of buttons. Samsung's keyboard supports dragged gesture input, which is always welcome on touch devices.

Samsung partnered with Citrix to bring Citrix Intelligent Workspace to the Galaxy Tab Active Pro. This allows businesses to give employees secure access to applications and data they need to get their jobs done. While we're on the subject of security, the Galaxy Tab Active Pro also has Samsung's Knox security platform. IT administrators can also use Knox to push applications and configurations to a fleet of devices across the business to give users the tools they need and lock down the device to protect against unauthorized access. 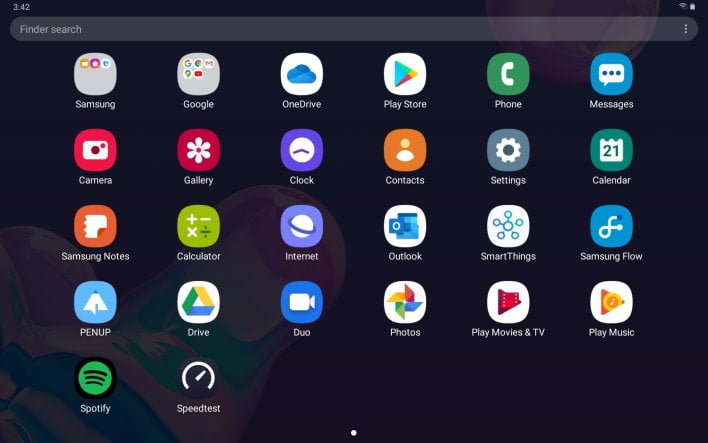 The number of default apps is pretty light, which we appreciate. There's little bloat taking up precious storage.

The S Pen works out of the box with the a couple of apps: Samsung Notes, which has some interesting tricks up its sleeve, and Penup. Samsung describes Penup as a "creative social network" in which where artists can share their creations with other Penup users or the internet at large. Going beyond that, Penup also hosts Live Drawings, which are videos that show how an artist created a sketch, un-colored sketches for coloring, and drawing challenges.

Taking notes in the Notes app using the S Pen and then double-tapping them with a finger will prompt the Galaxy Tab Active Pro to convert handwriting to text. We had some hit-and-miss results with ours, as my handwriting isn't great. The number of mistakes it made on my sloppy scribbles made it a bigger hassle to fix text than it was to just type it out in the first place. However, when I took my time and wrote legibly, the Samsung Notes app did a reasonably good job of interpreting my chicken scratches into text. Cursive was a bigger problem than just printing. With enough practice, we were finally able to get it to translate our notes into something legible. 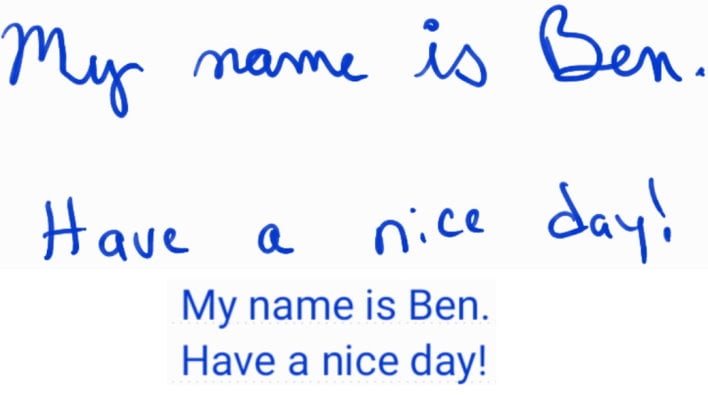 Top: my handwriting. Bottom: writing to text via OCR

Now that we've found our way around the Galaxy Tab Pro Active, let's run some tests.
NEXT PAGE