The Galaxy Book S, in either form, is a totally fanless affair. There's no need for fancy sound meters here, because it just doesn't produce any noise. Without a fan, the machine is passively cooled by a plate inside the chassis, but it doesn't come apart easily that we can tell.

What we do know, however, is that the Galaxy Book S keeps its processor cool and the Snapdragon 8cx model does a better job of it. On the Intel model while playing Minecraft or Pinball FX, we could feel the system get quite warm towards the top of the keyboard area and above the number row. Thanks to infrared thermometers, we can tell just how warm the shell of these systems get, so it was time to bust out our handy measuring device. 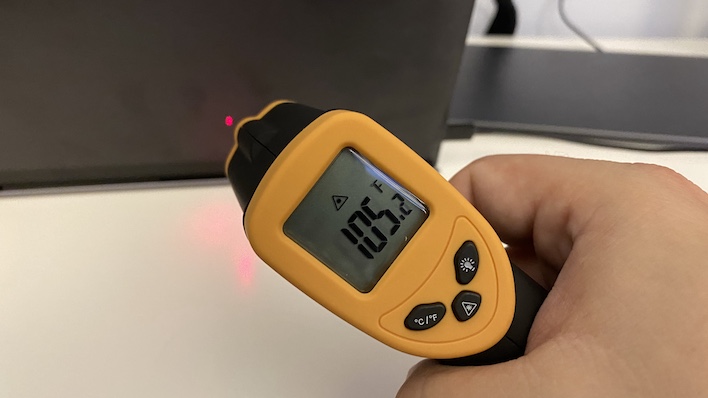 To make the systems work as hard as we could, we used 7-zip's built in benchmark. This test will run ad infinitum, at least until we stop it, so it's a great way to get the system worked up and as hot as possible over a prolonged period of time. Before starting, we put both machines to sleep and let them rest for approximately 30 minutes, when they both registered room temperature. To see how hot Galaxy Books S would get, we plugged them into AC power and began our torture test, measuring temperatures at a couple of intervals on both the top and the bottom of the device. Any sort of throttling is more likely to happen when the battery's power plan isn't trying to conserve energy.

Since we didn't open the Galaxy Book S, we had to take our best guess at where the CPU sits, and it makes sense that it would be at the hottest location we could find. On each laptop it was a little different, but the hot spot was always at the top of the keyboard somewhere towards the middle. We did this test only while on AC power so that we could stress each notebook as much as possible. Note that the temperatures measured may not be indicative of internal temperatures, but since we couldn't get anything to actually read the internal temps, this is what we've got to go on. Besides, if the notebook is sitting on our lap, it doesn't matter how hot it is inside, only if it will burn our legs. 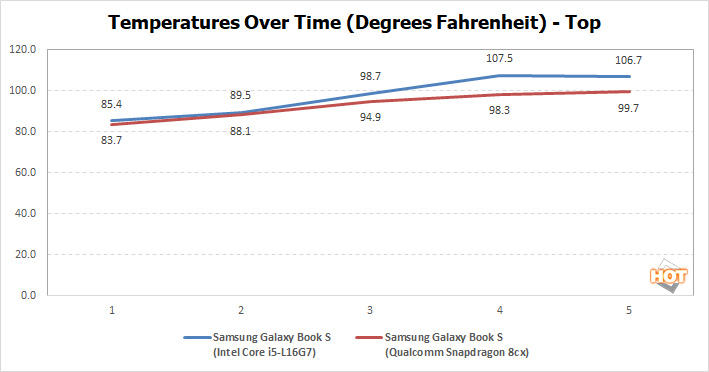 First we'll look at temperatures on the top of the device, in the warmest area just above the keyboard. As you can see here, the temperatures were pretty steady risers over the first 10 minutes of our test. At one minute, both machines were already around 10 to 12 degrees hotter than our 74 degree room. At every turn, the Lakefield-based Galaxy Book S was always warmer than the Snapdragon version. At the 10 minute mark, we can see that the Arm-based system is starting to approach its maximum temperature, but the Intel system has a bit to go. 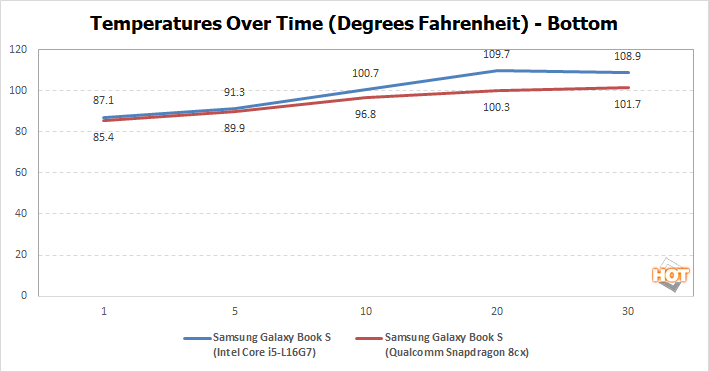 The temperatures on the bottom of the laptop are higher than the top on both systems, but not by much. Unfortunately for our thighs, though, nearly 110 degrees Fahrenheit gets kind of sweaty after a while, so the Lakefield system might be a little uncomfortable after an extended period. Fortunately it's unlikely that the system will actually be working that hard for that length of time. Still, even in normal use we can feel the keyboard and table start to warm up more quickly than the Snapdragon model.

While running warmer is a matter of comfort, it's also a matter of performance. Over time, heat build up will cause a system to dial back the CPU clock speeds to keep up with dissipation. If a cooling system can't keep up, the processor would otherwise run as fast as it can, generate extra heat, and the resulting build-up would cause a crash. The good news is that this is easy to watch. On the Core i5-L16G7, it also turns out this happens relatively quickly.

To test it out, we ran the 7-Zip built-in benchmark—the 64-bit version for the Intel machine and the 32-bit version for the Snapdragon 8cx. All it takes is a few minutes of continuous stressing and eventually we see performance tank. That's just a matter of life. What's more important, however, is how quickly performance trails off and by how much.

7-zip benchmark on the Snapdragon 8cx after 5 minutes

When we first started the test, the Core i5-L16G7 performed well enough, maxing out at around 8,900 KB/sec on the compression test and 13,000 KB/sec on the decompression test. By the time the test had run for five minutes, those numbers had dropped by around 20%, to the figures you see above. Meanwhile, the Snapdragon 8cx didn't have anywhere near that kind of drop off so soon, and its performance throughout was much stronger. It wasn't until almost 20 minutes in that the performance showed any kind of consistent dip.

Decompressing a very large file is the sort of thing you might need to do with a laptop, though it might not take quite as long as our tests did. Still, the Snapdragon 8cx handled the heat much better than the Core i5-L16G7.

Intel's Core i5-L16G7 appears to be an exercise in compromise. Whether choosing an Intel Foveros-enabled Lakefield system or the Snapdragon 8cx, we can get an unbelievably thin and lightweight notebook with premium build quality and a great display. The next series of trade-offs, though, is a little tougher to call. The Snapdragon 8cx wins on battery life by a large margin and overall had better performance. And though it can't run 64-bit apps compiled for x86, it does have a decent native app ecosystem for the types of workloads you'd run on a super-light machine like this. On the other hand, the Intel-powered model can run just about any app under the sun, but the battery life is not any better than more powerful systems we've tested. We're not particularly fond of that compromise; we'd rather just get an x86 system with a Core i7-1065G7, if we don't get a transformative always-on experience, not to mention ubiquitous cellular connectivity. 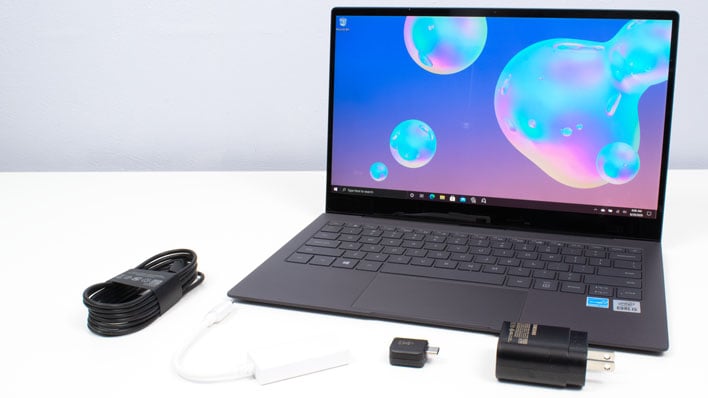 The biggest advantage the Intel-based Galaxy Book S has is that it can run any app. Having full x86-64 compatibility means that apps like Adobe Photoshop and Premier, or DAW apps like Pro Tools and Reaper will just run. Unfortunately that's somewhat of a hollow victory. The Core i5-L16G7 has five cores -- four of them are thermally-efficient but performance-deficient Tremont cores reserved for ultra-low-power applications. They're enough oomph to handle background duties, but you won't want to rely on them for a power-critical app. This CPU is not fast enough to run digital content creation applications, and in the case of the Galaxy Book S, the primary storage is also a big detriment.

Only one leading-edge x86 core made it into this design, and without Hyper Threading, it can't work on more than one task at a time. We were surprised that the Snapdragon 8cx can run Microsoft Office apps just as quickly as the Core i5-L16G7, or much faster than the Intel processor when on battery power. If Microsoft releases a fully Arm-native version of the full Office Suite, the Snapdragon 8cx's performance would look even better. That leaves us thinking that full x86 compatibility is not quite as important as we first thought. If the only apps that are usably fast are already available for Arm, the Snapdragon 8cx version of this machine is a much more attractive value proposition.

It gets a little worse on the performance front for Intel when we look at our 3D graphics examples. The GPU-focused 3DMark graphics tests favored the Adreno 680, and the CPU tests were huge wins for Qualcomm. That bleeds over somewhat into our casual gaming tests. The Core i5-L16G7 could run Minecraft at 60 fps most of the time, but Minecraft runs just as well on Arm. Pinball FX 3 was playable, but the frame rate and level of detail weren't great, without dialing down the details. This obviously isn't a gaming machine, but neither is the Snapdragon version, and trailing on both the CPU and GPU fronts surely isn't the position Intel would want to be in. 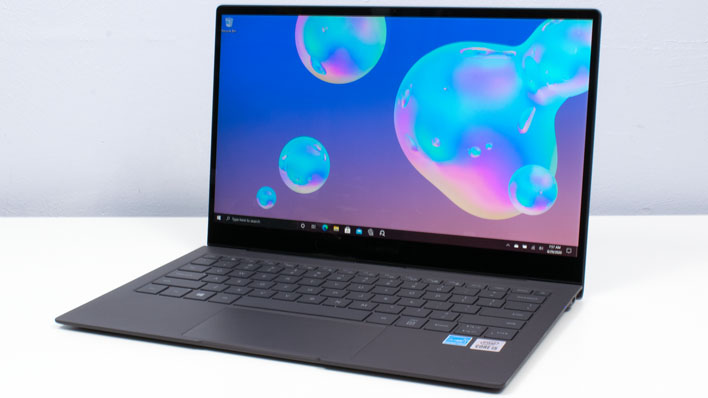 That brings us to the battery life test. Performance was so different between the two that we could drain both systems simultaneously, then we could recharge the Intel system to 100% and re-run the test. The Snapdragon machine did finally give in while the Core i5 version was on its second run, but the Arm version of the Galaxy Book S nearly lapped the x86 model. The Core i5-L16G7 scored no better in our video playback loop testing than a much higher-performance system.

Finally, as a laptop, we have some nits to pick with both iterations of the Galaxy Book S. Like before, the keyboard does not provide a premium typing experience. The key travel is shallow thanks to the system's thin profile. The track pad is smaller than the ones we find on many other 13.3" notebooks, too. For a machine that's meant to be used on the go without any other accessories, these are difficult to overlook. There's some flex and creak to the body, too, something that would be avoided with more reinforcement and a thicker body, or with a fully metal chassis. A bigger body would add heft to a very light laptop, and a metal body would make it much more expensive, so we do understand the trade-offs at play here. On top of that, the Arm-based model has always-on network connectivity available via its 4G LTE cellular radio (no need for Wi-Fi), though the Intel model is $50 cheaper. Still, at $949 MSRP ($899 with a current promotion) this iteration of the Galaxy Book S is not a small investment.