We primarily used the Find X2 Pro on AT&T and T-Mobile’s 4G LTE networks in San Francisco and Portland (OR), and didn’t have any issues. Calls sounded clear and data speeds matched other phones on these networks. Technically, it’s compatible with AT&T’s low-band 5G network (850MHz, n5), but this didn’t work for us despite multiple attempts, even after consulting with Oppo. We also tried T-Mobile’s low-band 5G network (600Mhz, n71) -- just in case -- without success. So if you’re in the US, don’t expect the Find X2 Pro to support 5G. 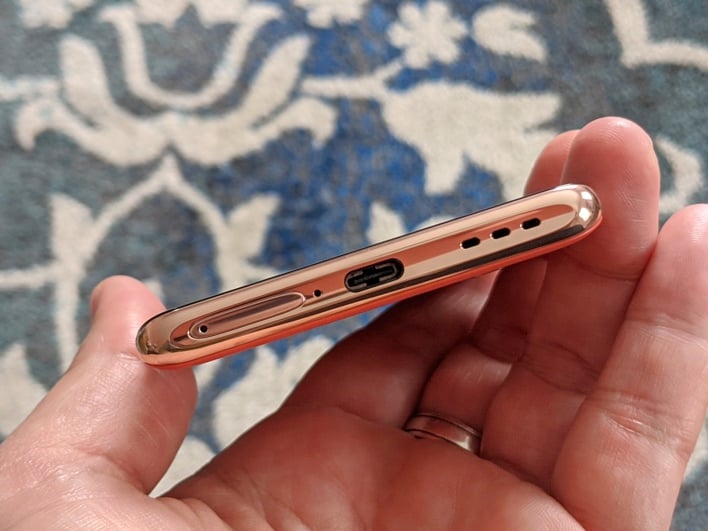 On the audio front, the Find X2 Pro features excellent stereo speakers with Dolby Atmos (earpiece above the display plus bottom firing driver). There’s no headphone jack, which is annoying, but at least Oppo includes wired USB Type-C earbuds in the box, and the Find X2 Pro handles analog and digital USB Type-C audio devices just fine. As a bonus, it supports aptX HD over Bluetooth, and the built-in DAC and headphone amp sound pretty great when using analog dongles -- not LG V60 ThinQ 5G great, but better than the OnePlus 8 Pro.

The Find X2 Pro is powered by Qualcomm’s flagship SoC, the mighty Snapdragon 865. It also packs the company’s X55 5G modem, 12GB LPDDR5 RAM, and a whopping 512GB of UFS 3.0 storage. Sadly though, there’s no memory card slot, and while the Find X2 Pro supports sub-6GHz 5G networks in some markets, it doesn’t in the US -- despite listing band n5 (850MHz) for AT&T in the specs. On the 4G LTE front, it’s compatible with most of AT&T and T-Mobile’s bands, except band 71 (600MHz) on T-Mobile. There’s no support for Verizon.

Between its high-end chipset, fast RAM/storage, 120Hz screen, 240Hz touch layer, and speedy build of Android, the Find X2 Pro obviously feels super responsive. Basically, it’s a joy to use, no matter what you’re doing -- from shredding tires in Asphalt 9 to getting your Zoom on with friends and family. While you’d clearly expect hardware with such lofty specs to be quick, performance also depends on getting the software right. Thankfully, Oppo’s done a pretty good job optimizing Android 10, as you can see in our benchmarks below. 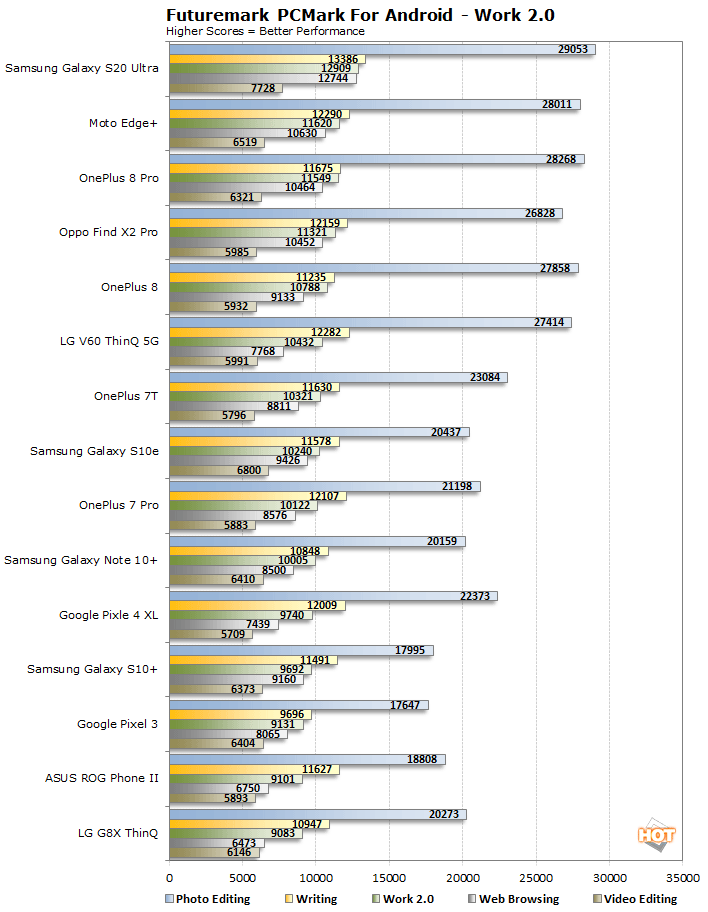 The Find X2 Pro scores right below the OnePlus 8 Pro. The Snapdragon 865 powering the device clearly offers strong all-around performance for the workloads used in PCMark for Android. 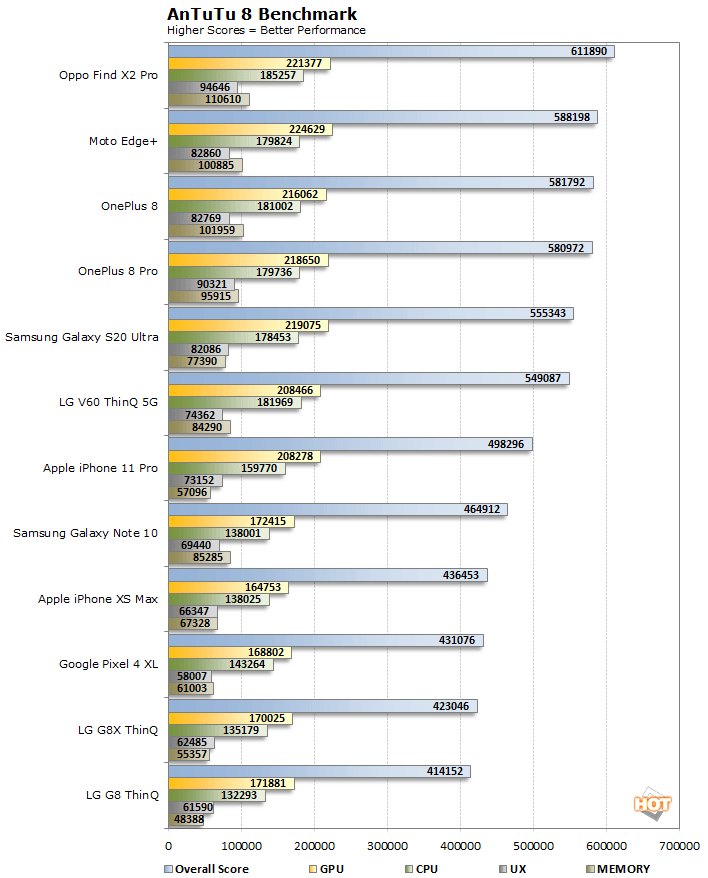 We saw more of the same in the AnTuTu benchmark. Here, the Find X2 Pro beats the Moto Edge+ and climbs to the top of the charts. 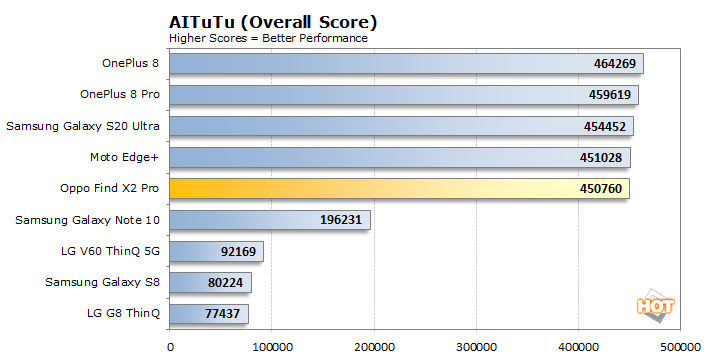 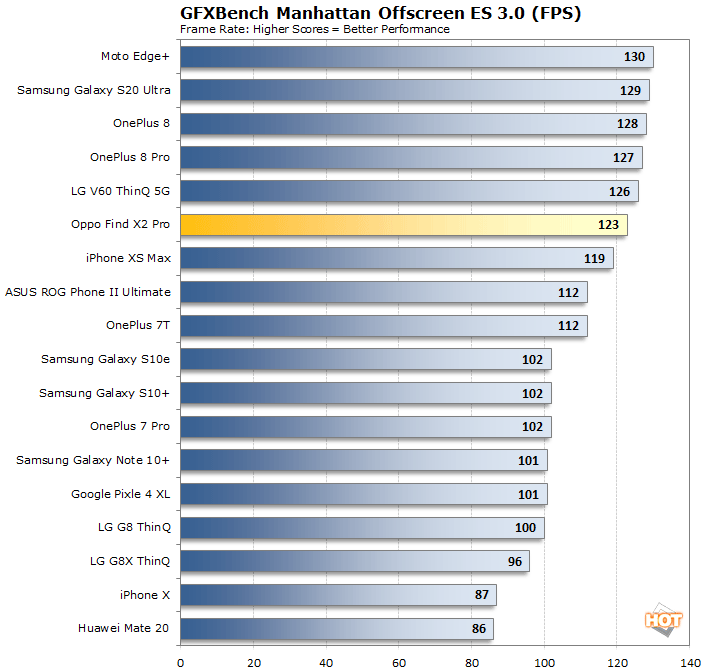 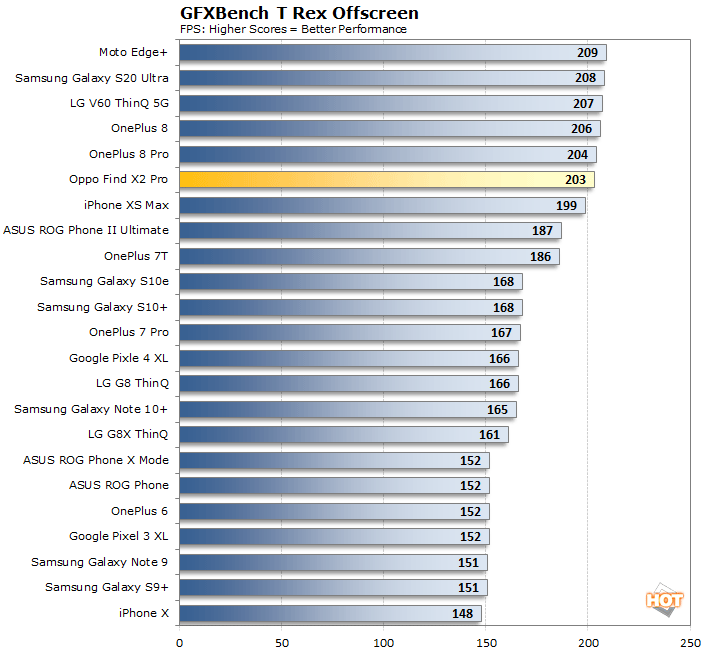 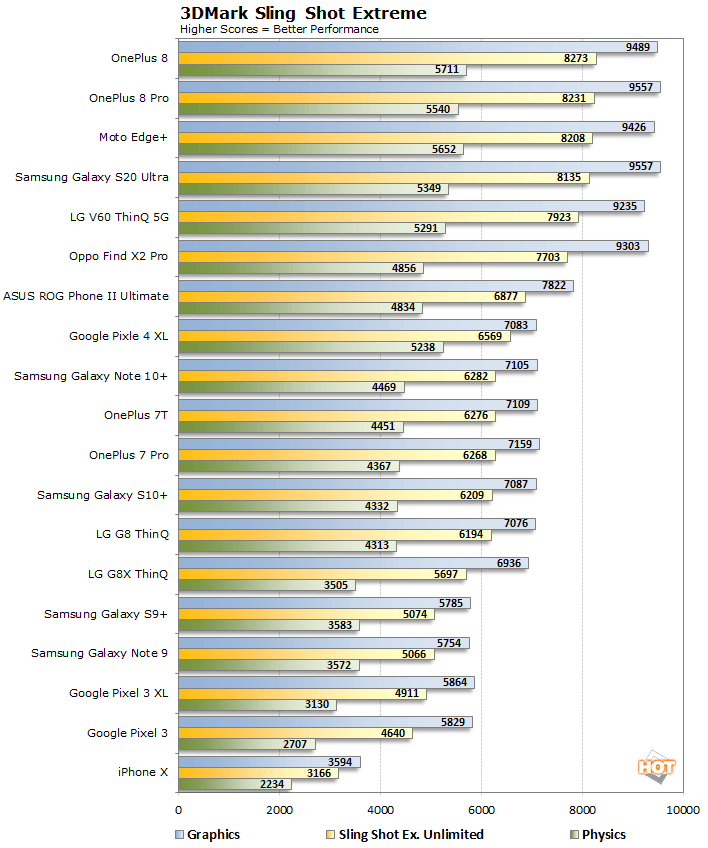 The Find X2 Pro also performed well in these 3DMark tests. The OnePlus 8 and 8 Pro finished at the top of the heap, but Oppo wasn't too far behind.

Our review unit’s optical in-display fingerprint sensor works pretty well, despite our fingers being drier than normal from washing our hands more frequently. The fingerprint sensors on many of our devices are clearly getting more finicky during this pandemic. We really like the Find X2 Pro’s linear vibration motor. It feels super precise, and provides great haptic feedback. As far as other specs go, this handset boasts WiFI 6 (802.11ax), Bluetooth 5.1 (with LE), NFC, A-GPS/ GLONASS / Beidou / Galileo, and the standard array of sensors. 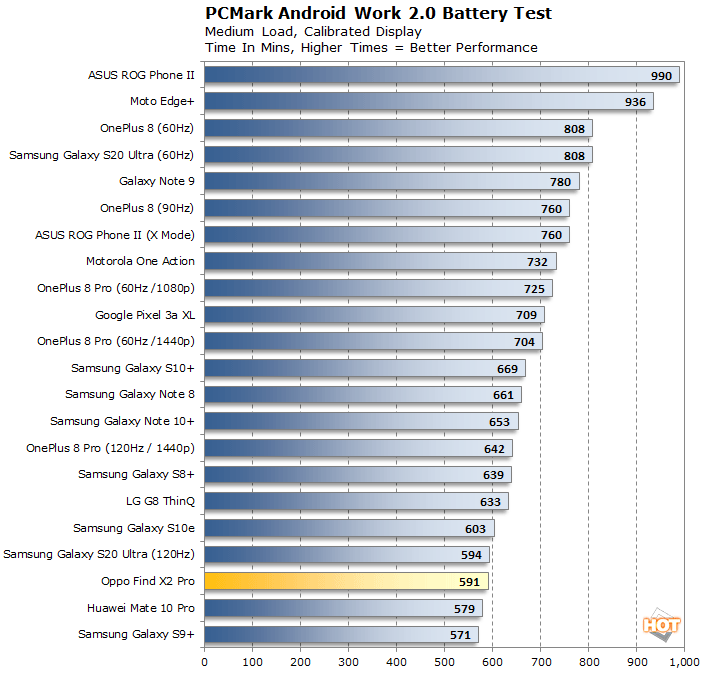 Battery life is good, but not great. Our PC Mark battery test ran in 9 hours 51 minutes (using the 1080p, 120Hz default setting), which is pretty decent. We’ve been able to squeeze two days between charges with normal use and we’re confident most users will be fine on a single charge, even on busy days. The Find X2 Pro features Oppo’s 65W SuperVOOC 2.0 wired charging, which can refill the entire 4260mAh pack in just 38 minutes (by charging two identical cells in parallel at 10V and 6.5A). In our tests, we achieved a full charge in just 30 minutes. Does this excuse the lack of wireless charging? We don’t think so, but at least the wired charging is incredibly fast.

Next up: software, pricing, and the verdict...