We used both handsets on T-Mobile's and AT&T’s networks in and near San Francisco, and didn’t have any issues. Calls sounded loud and clear, and data speeds were on par with other devices on these networks. Unfortunately -- and like the OnePlus 8 series -- the OnePlus 9 only works on T-Mobile’s sub-6GHz 5G network. Same deal with the 9 Pro, with the addition of mmWave 5G for the handful of T-Mobile customers in compatible service areas. 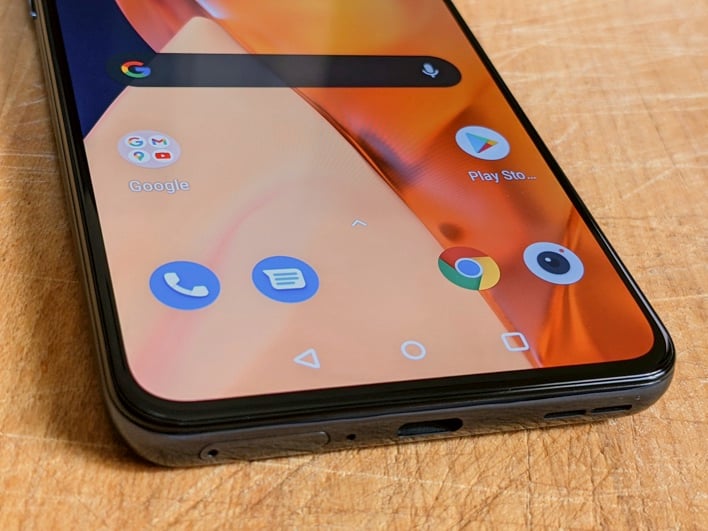 OnePlus 9 ports
AT&T and Verizon customers using these phones will be stuck on 4G LTE -- at least for the time being. OnePlus is apparently working with Verizon to certify both devices for its 5G network, but support for AT&T’s 5G network doesn’t appear likely. And frankly, this is disappointing, considering most current unlocked devices from Apple, Samsung, and Google support 5G networks for the vast majority of US carriers. 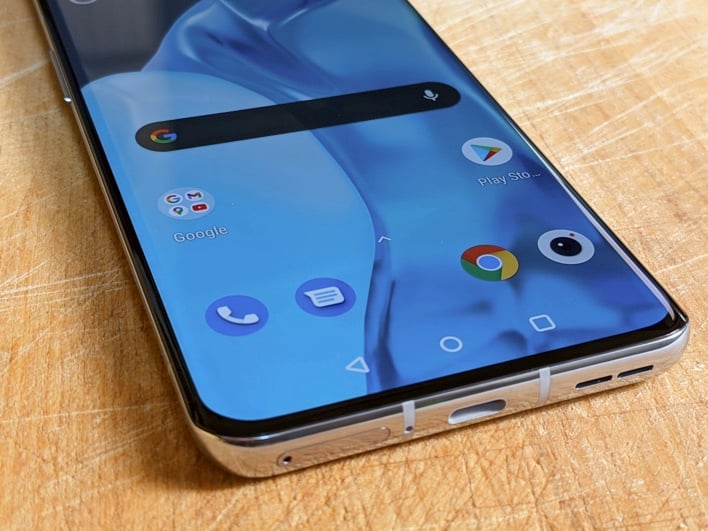 OnePlus is well known for delivering top notch performance, and the OnePlus 9 series is no exception. Both phones pair Qualcomm’s flagship SoC, the Snapdragon 888, with 8 or 12GB of LPDDR5 RAM and 128 or 256GB of UFS 3.1 storage (but no microSD support). Add an ultra smooth 120Hz screen plus a highly optimized build of Android 11 (Oxygen OS 11) to the mix, and you have a serious recipe for speed.

These handsets feel fast, no matter what you’re doing. Whether you’re sorting through emails in Spark, posting a story on Instagram, meeting with friends on Zoom, or fragging away in Call of Duty, everything just seems to happen instantly. Our benchmarks place both devices squarely in the middle of our Snapdragon 888 charts, but unfortunately, sustained performance exhibits some throttling (see below). 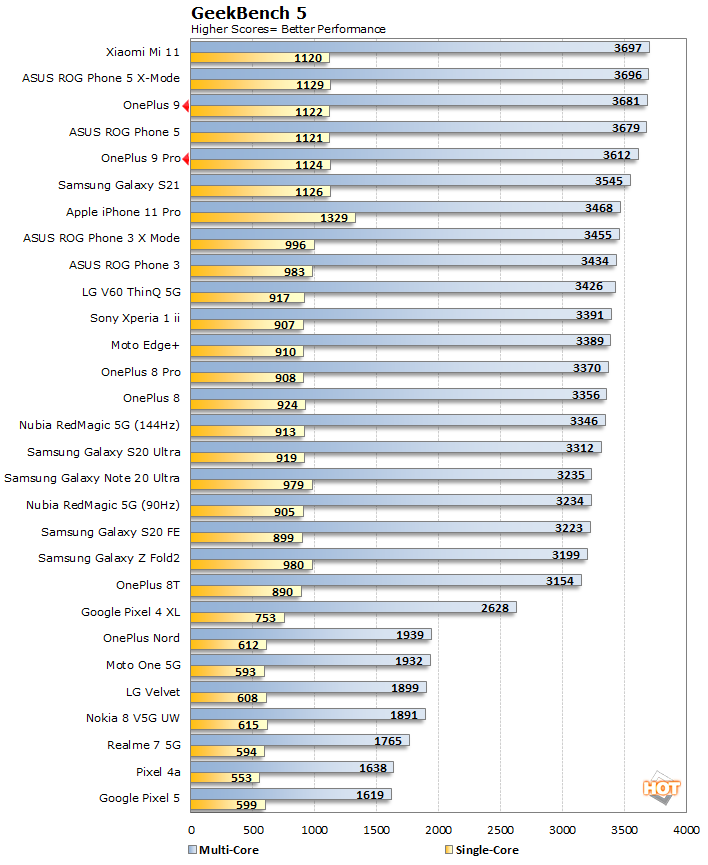 GeekBench isn't our favorite benchmark, as it's purely synthetic and can be heavily targeted for optimization. Regardless, the Snapdragon 888 processor delivers a noticeable improvement in single thread performance and a marginal improvement in multi-threaded performance over previous generation Snapdragon 865-equipped Android flagships. The OnePlus 9 and 9 Pro both beat the Galaxy S21 and the OnePlus 9 beat the ROG Phone 5 in multi-threaded performance. 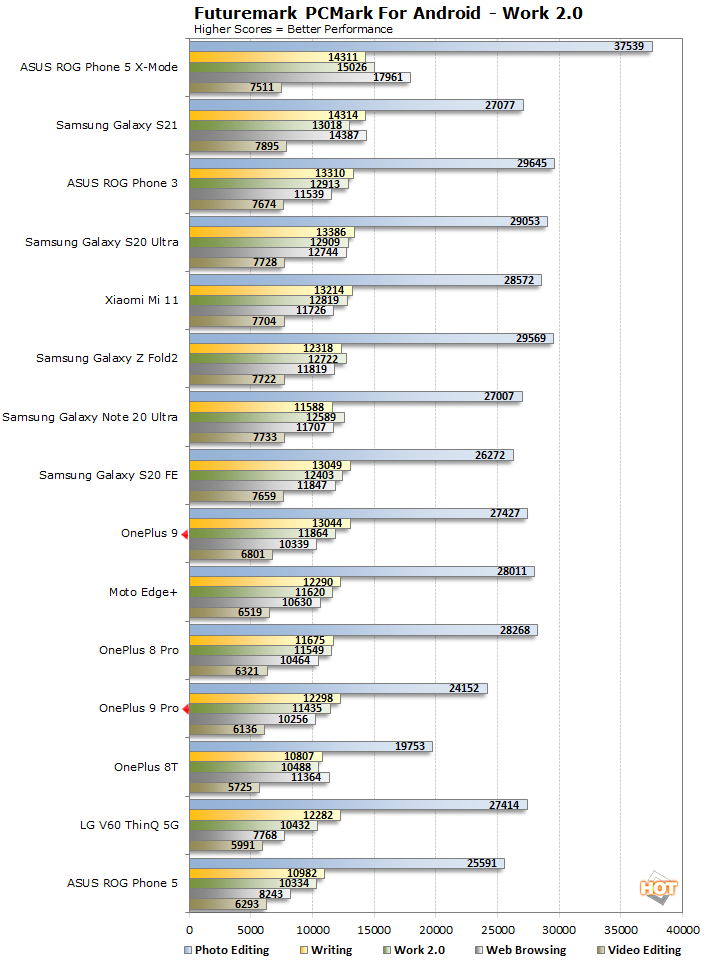 Here both handsets show similar performance to previous generation flagships, with the OnePlus 9 falling just behind the Galaxy S20 FE and the 9 Pro falling just behind the OnePlus 8 Pro. The Galaxy S21 performed better on this benchmark.
AnTuTu’s latest benchmark returns a number of metrics ranked with somewhat nebulous scores, rather than frame rates or time to complete. Here we're running the latest version of AnTuTu across multiple Android devices. AnTuTu returns four top level performance results which are all included here: CPU, RAM, 3D, UX (or User Experience), along with a total score... 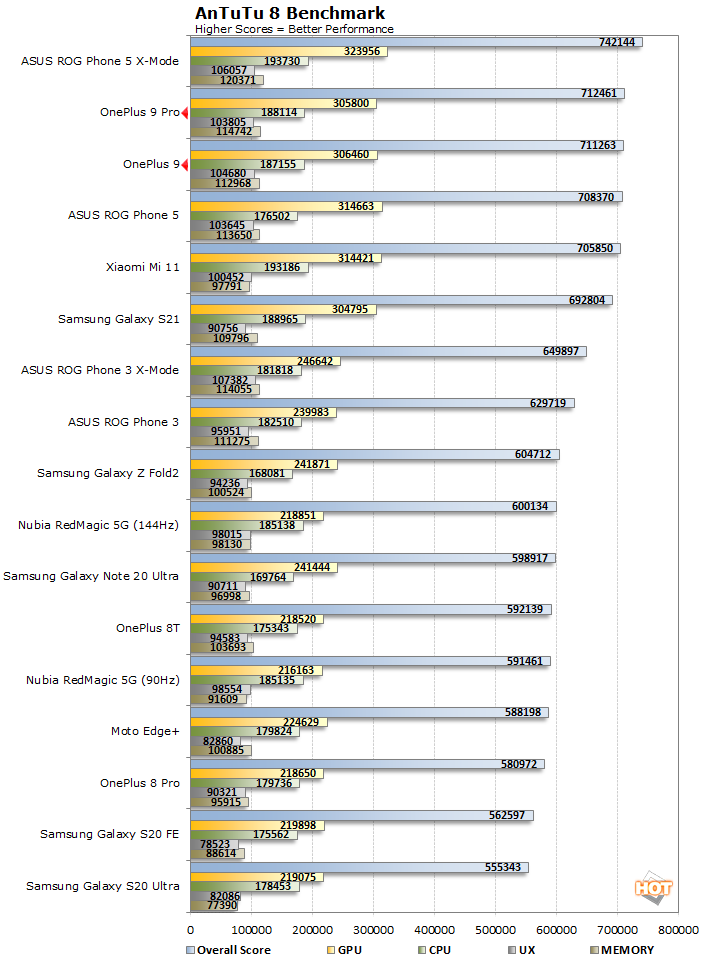 According to AnTuTu, The OnePlus 9 and 9 Pro offer a significantly more substantial increase in performance vs. previous generation Android handsets, beating the Galaxy S21 in all but the CPU test, and beating the ASUS ROG Phone 5 in overall score.
Next we're checking how the OnePlus 9 series compares in GFXBench, which has been one of the standard mobile graphics/gaming performance benchmarks for years. To ensure that display refresh (v-sync) and resolution aren't limiting factors, we're comparing off-screen test results here. GFXBench tests OpenGL ES graphics workloads and we're specifically testing OpenGL ES 2... 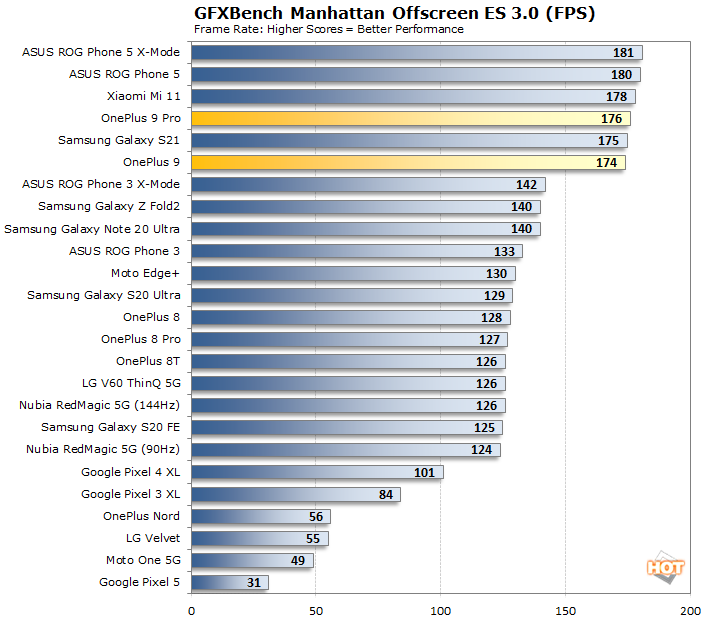 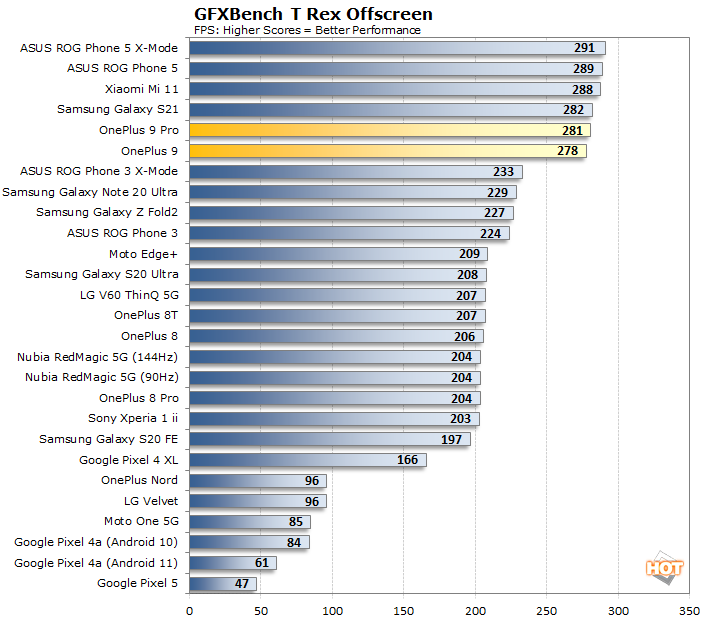 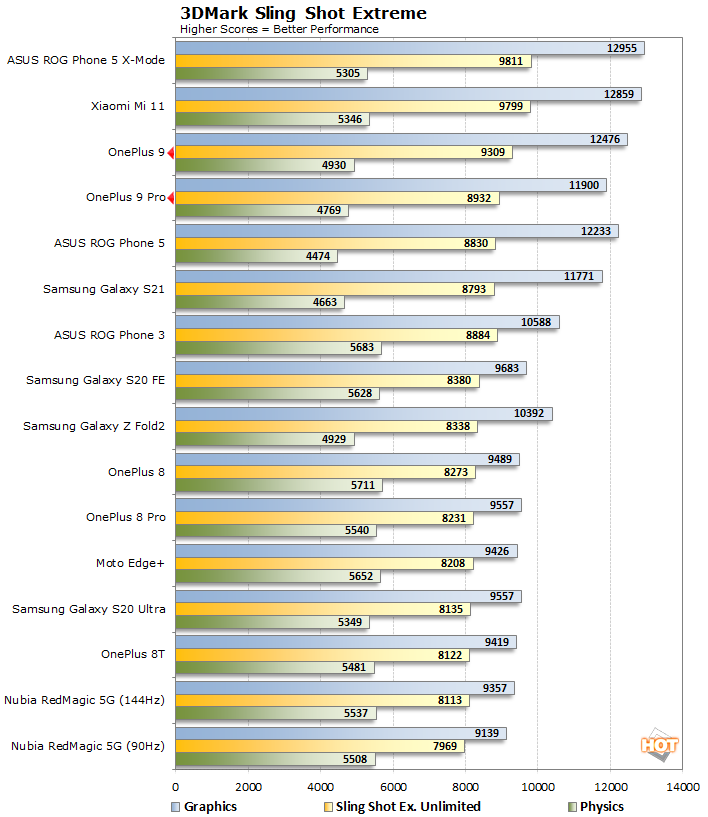 Again here we see a more modest improvement to the graphics score over Snapdragon 865-equipped flagships. Still, the OnePlus 9 and 9 Pro perform extremely well in this test, beating the Galaxy S21 and almost matching the Mi 11.


3DMark Wild Life is the latest cross-platform test from UL. Its primary purpose is to measure GPU performance across platforms, and two distinct tests are available. The standard Wild Life test is designed to give feedback on how a game performs over a short period of time. With mobile games, people typically play in brief spurts when they find some free time; be it on the bus, on the subway, or a quick battle royale session over lunch break. The 3DMark Wild Life Stress Test, on the other hand, shows how a device performs over a longer stretch of time, and takes note of performance degradation that might crop up due to increased heat levels and throttling. 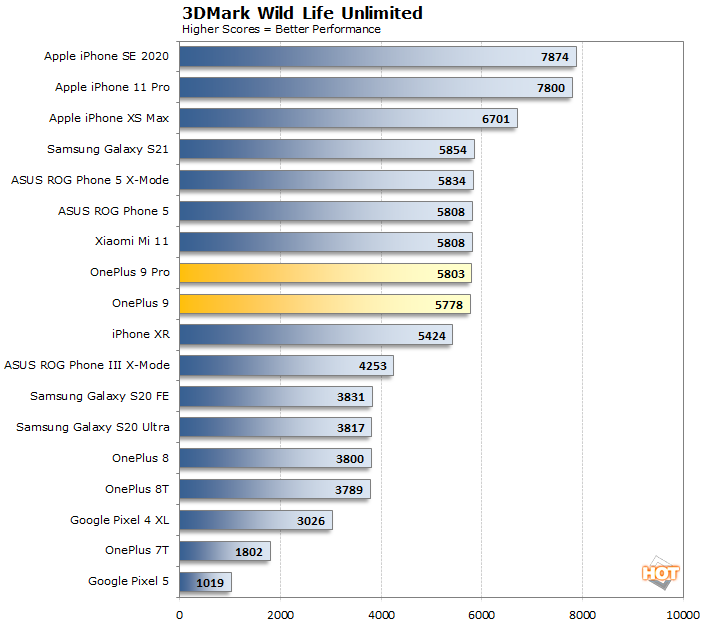 3DMark Wild Life is a significantly more taxing graphics benchmark that employs cutting-edge mobile game engine technologies to deliver impressive visuals -- as you can see in the screen shot above. Here the Snapdragon 888-powered OnePlus 9 series delivers a massive improvement in performance versus some of the fastest Snapdragon 865-equipped devices (Galaxy S20 Ultra and S20 FE), almost matching the Mi 11.
Unfortunately, the OnePlus 9 and 9 Pro do exhibit similar throttling to what we experienced with the Galaxy S21, managing a stability score of just 55.3% and 55.4%, respectively. 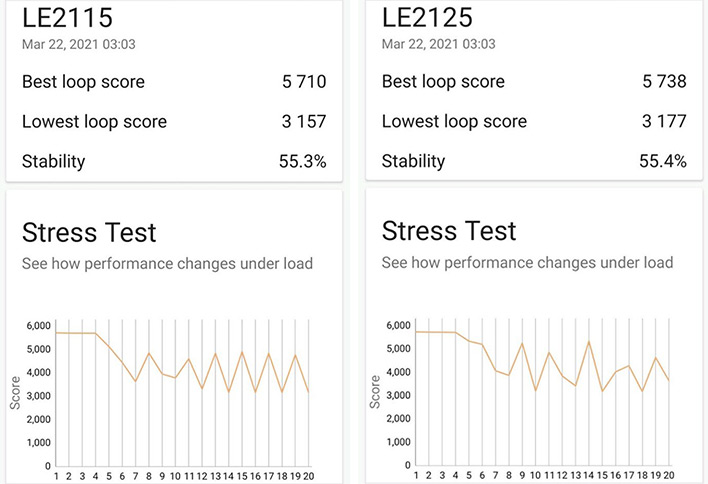 Looking at the other specs, you’ll find sub-6GHz 5G (SA / NSA), CAT 20 LTE, dual-band WiFi 6 (802.11ax), Bluetooth 5.2 (LE), NFC, and dual-band A-GPS / GLONASS / Galileo / Beidu positioning, plus the usual collection of sensors. And of course, the OnePlus 9 Pro adds mmWave 5G to the list. Haptics are up to OnePlus’ high standards, and the optical in-display fingerprint scanner works like a charm (and ditto for face unlock). 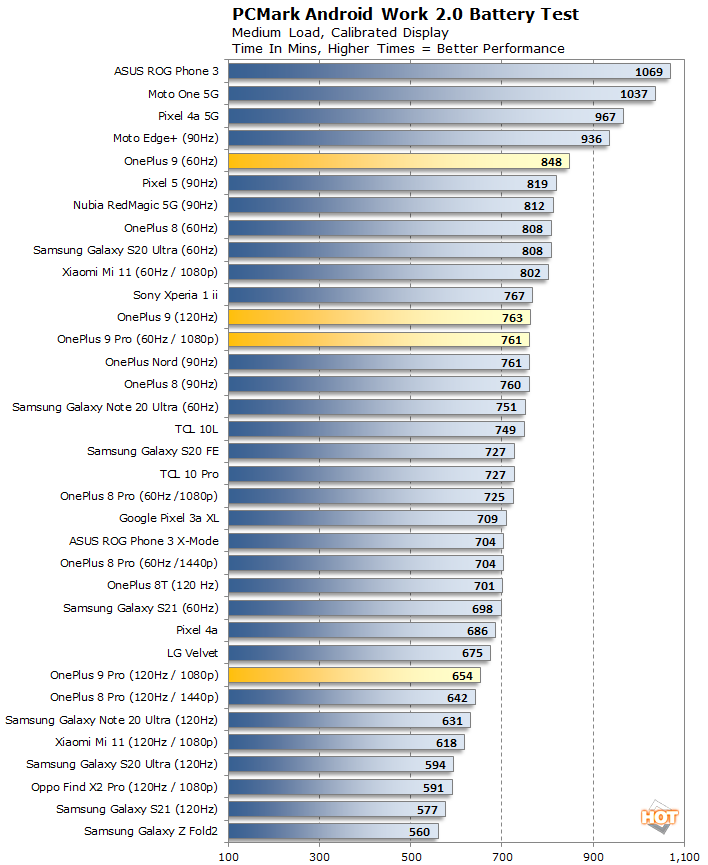 Battery life is perfectly fine, but not outstanding. At 1080p and 120Hz, our PCMark battery test clocked in at 12 hours and 43 minutes for the OnePlus 9, and 10 hours and 54 minutes for the 9 Pro. Things are slightly better at 60Hz, with the OnePlus 9 achieving just over 14 hours, and the 9 Pro reaching 12.75 hours. Regardless, most folks should get a normal day’s use on a full charge, and refills are quick.

BTW, these handsets come with a 65W wired fast charger in the box (a $35 value), which also doubles as a 45W USB-PD charger (with PPS). So go right ahead, charge your MacBook Air with the same charger as your OnePlus 9. And if you want OnePlus’ proprietary 50W wireless fast charging stand, it costs $69 but doesn’t come with a brick. 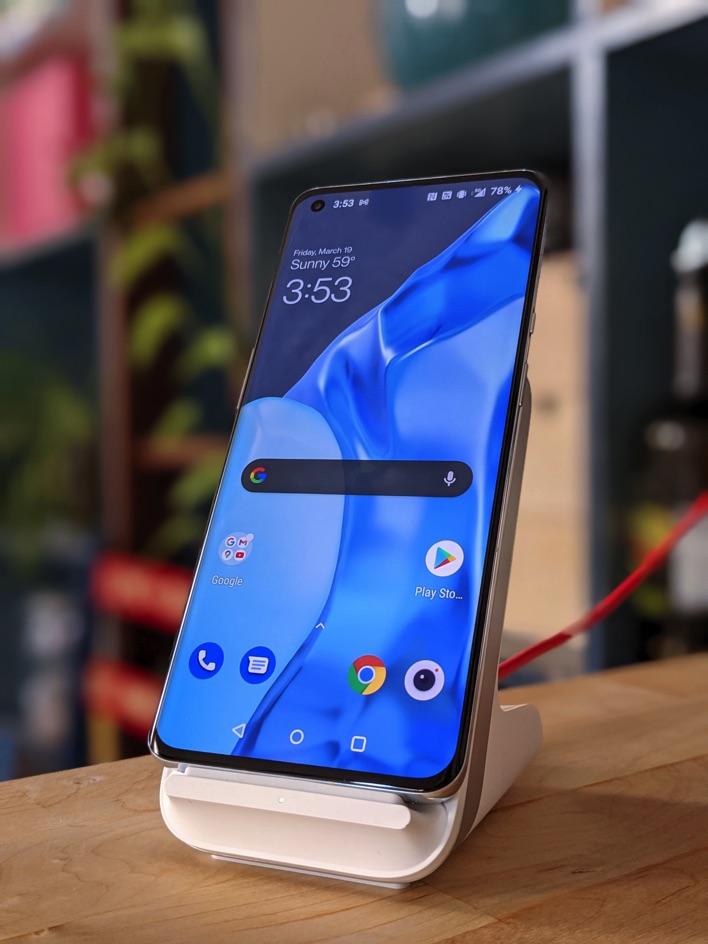