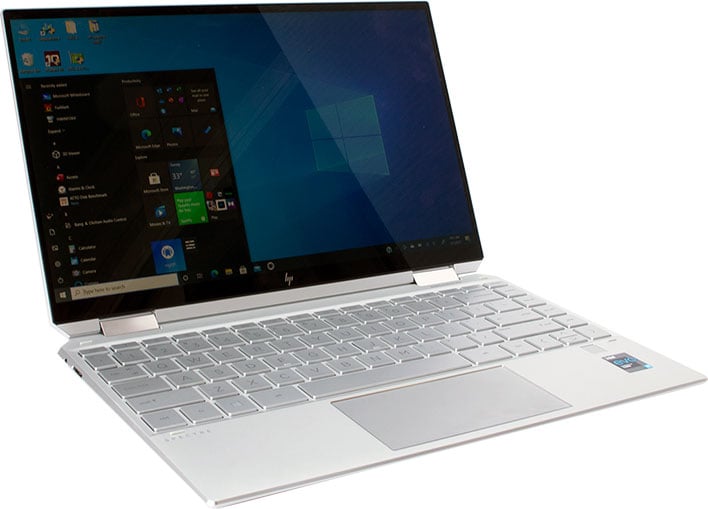 As time goes on, more laptops built around Intel's Evo platform are emerging, bringing with them a combination of specifications and features that meet or exceed specific baseline criteria for performance, battery life, connectivity, and a few other bits. These common threads weave through Intel's Tiger Lake silicon with Xe graphics, which are key cogs in the Evo machine. HP's latest refresh of its Spectre X360 13 for 2021 is one of those laptops, blending luxury styling with Intel's newest generation CPUs and graphics, and the result is an absolutely gorgeous convertible with plenty of zip.

The gas mileage is decent on this convertible as well, which is something we'll talk about a little later. For now, let's keep our focus on the physical design and hardware makeup of the Spectre X360 13, which drove up to our doorstep sporting a handful of upgrades over the $979.99 base model. Key among them is an 11th Gen Core i7-1165G7 processor wielding four cores and eight threads clocked at 2.8GHz (base) to 4.7GHz (max Turbo), along with 12MB of L3 cache.
This is one of two options available in the Spectre X360 13, the other being a Core i5-1135G7 born from the same Tiger Lake family. Both are quad-core processors, but the Core i7-1165G7 provides more grunt with a 500GHz higher turbo clock, 33 percent more L3 cache, and a beefier Xe graphics arrangement wielding 96 execution units, compared to 80 EUs in the lower end model. 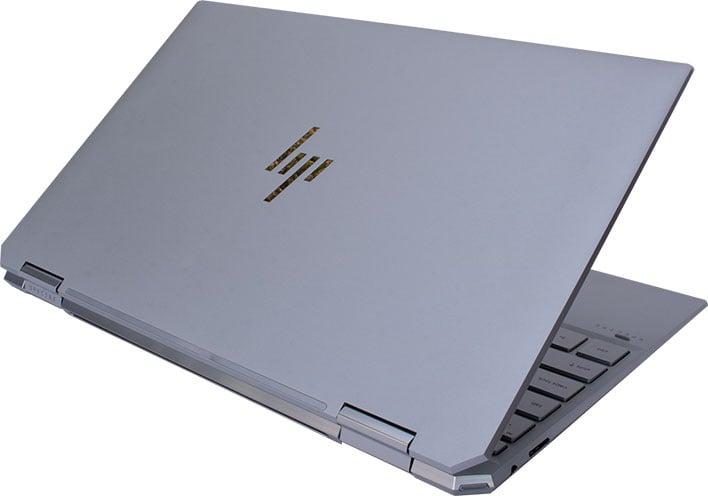 The configuration HP sent us to evaluate also arrived with 16GB of DDR4-2133 RAM and an Intel Optane Memory H10 module, which is a hybrid solid state drive (SSD) blending 3D Xpoint memory technology with quad-level cell (QLC) 3D NAND flash memory on a single M.2 device. What it amounts to in this setup is a 512GB SSD bolstered with 32MB of Intel Optane memory to speed up storage operations, primarily through caching.
Curiously enough, HP is not charging extra for the two storage options it offers with Optane memory, those being 512GB and 1TB. Whether you opt for the Optane memory pairing or not, the cost is the same, so you might as well go for the added performance. Alternatively, HP offers 256GB and 2TB storage options, both without Optane memory thrown into the mix.
Here's a look at the rest of the key specifications...

The HP Spectre X360 13 has a solid feature-set from top to bottom, the only oddity being the rather slow-clocked RAM. As we noted in our Lenovo Yoga 7i review, which was also saddled with comparatively slow memory, some Tiger Lake laptops go all the way up to DDR4-4733 (MSI's Prestige 14 Evo uses 4,266MHz RAM). This seemed to drag down graphics performance on the Lenovo machine, though as we will get to in our benchmarks here, the Spectre X360 13 appeared to be far less impacted.

Everything else looks up to par for a modern day workhorse. Wi-Fi 6 (802.11ax) connectivity and Thunderbolt 3 are both present and accounted for, and looking over the full list of specifications, nothing else really stands out as unusual or worrisome.
As configured, this model runs $1,279.99 and comes with a one-year warranty. That's pretty reasonable for a premium laptop, and the starting price is even lower at $979.99, which cuts the storage in half to 256GB (and loses Optane memory), and bumps the processor down to the Core i5-1135G7. And while HP did not bundle one in with our review system, the Spectre X360 13 comes with a rechargeable stylus, providing some added value to the already enticing package. It also comes with a carrying case/sleeve.

You can bet if HP was around in the Stone Age, it would have been trading the best looking wooden rods, spears, and other primitive tools of the time, for shiny rocks and the smoothest sticks. These days, HP has access to finer metals, like aluminum, and cutting edge machining processes, and it shows—its Spectre X360 lineup has consistently had premium aesthetics, and that carries over to the latest generation Spectre X360 13. 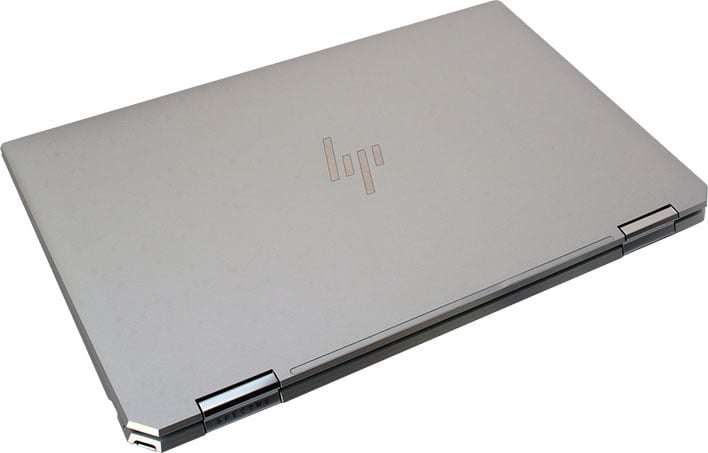 This newest iteration is another lesson in immaculate craftsmanship and the art of subtle yet thoughtful design cues. If you ask HP, it will wax poetic about the convertible's gem-cut construction and precisely chiseled angles obtained through CNC machining a single piece of aluminum. We just say it looks damn good, which admittedly is less eloquent, but hey, we never purported to be poets.

Buyers can choose between three color options—Poseidon Blue, Nightfall Black, and as shown here, Natural Silver. We'd probably opt for the Nightfall Black with its gold trim, but the silver looks great too, if a bit understated. There's nothing loud or obnoxious about the design. HP's modern logo sits ever-so-slightly indented in a mirror finish at the center of the lid, and the entire build feels sturdy. 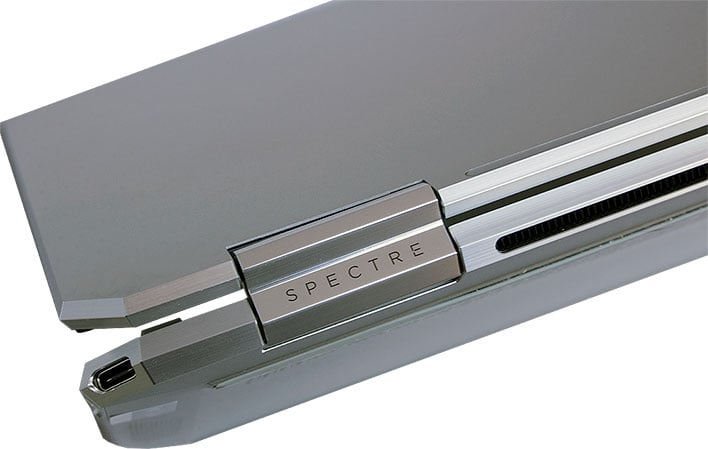 The beveled edging serves up a shiny trim, and if you look close enough, you can make out fine brush strokes in the metal. A tapered design and angled corners give the laptop some added visual pizazz. They're also functional and not just for show—the power button rests in the left corner (bottom section), and the right corner is home to a USB 3.1 Gen 1 Type-C/Thunderbolt 3 port.

There are two USB4/Thunderbolt 4 ports on the right side of the laptop, along with a microSD card reader. The little switch that sits in between is a privacy toggle, or as HP calls it, a webcam kill switch. Flipping the toggle cuts off power to the webcam, "making it unhackable." This is a different approach than the one Lenovo took with its Yoga 7i, which features a slider on the top to physically cover the webcam. We'd like to see a solution that offers both, for added peace of mind.

On the left side of the convertible, HP offers up a 3.5mm headphone/microphone combo port, and a cleverly implemented USB 3.1 Gen 1 Type-A port. There is a little flap that pulls down so you can jam a full-size USB peripheral into the port, and when not in use, the flap closes to mostly conceal what would otherwise be a gaping hole in the slim bottom frame. It's similar to what OEMs have done in the past with Ethernet ports (which this lacks, hence why products like Killer's 2.5G USB-C Ethernet adapter exist). 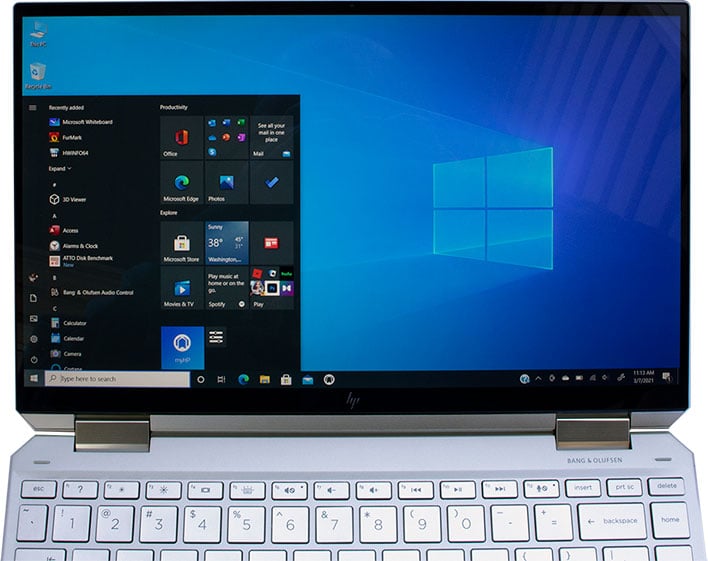 HP pitches the Spectre X360 13 as the world's smallest convertible with a 90 percent screen-to-body ratio. There are actually three display options, all of which measure 13.3 inches diagonally. The one we received is an OLED edge-to-edge touchscreen with a 1920x1080 resolution, rated to hit 400 nits.
For $30 more, buyers can opt for an IPS panel (also 1080p) with HP's Sure View privacy screen, which uses 3M's light control technology—when toggled on, it focuses light to the center of the display so only the person directly in front of the laptop can see what's on the screen.
The third open is a 4K OLED display (+$150) with HDR support. Like the other two displays, it supports touch interaction, as is critical for a product billing itself as a convertible (a tablet form factor would not be very useful without touch input).
At full blast, we measured around 370 lux with our light meter. That's around 55 lux higher than what we measured on the Yoga 7i. Video and images look splendid on the Spectre X360 13, maintaining their crispness and visibility even at extreme angles. The only real knock, if you even want to call it that, is the 16:9 aspect ratio. Some modern laptops have transitioned to using displays with a 3:2 aspect ratio, like Microsoft's Surface Pro 7, and even HP's own slightly bigger Spectre X360 14 with a 13.5-inch display. 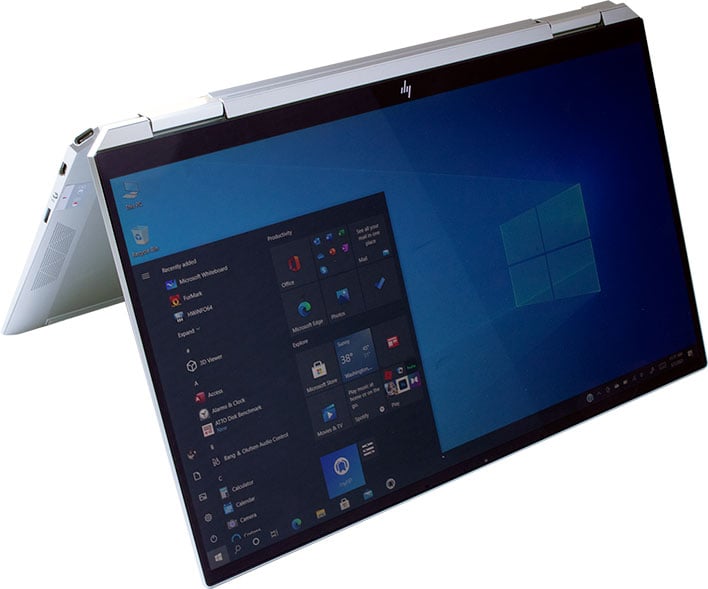 Part of the appeal with a convertible is the flexibility of the form factor. You can fold the screen back into stand mode, set it up in tent mode as shown above, or flip it all the way on its back to use as a tablet or a sketchpad (with the included stylus). Compared to a standalone tablet, it's a bit on the heavy side in that form factor, at 2.88 pounds. Though as a laptop, this is a thin and light system that is easy to carry around. 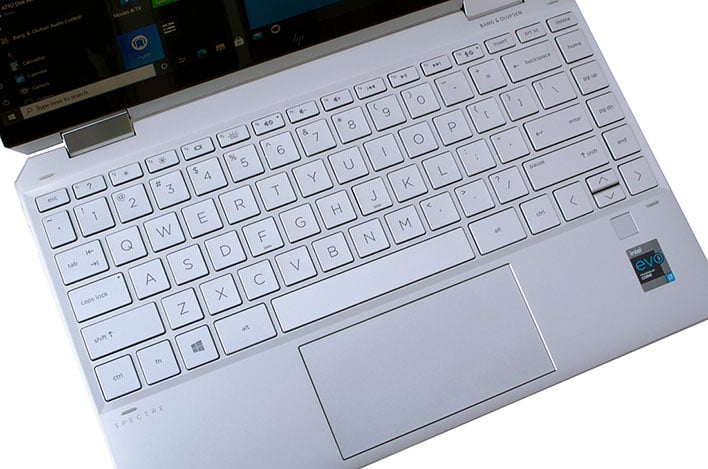 Typing on the island-style keyboard is comfortable enough for a laptop. The keys are big enough and have sufficient spacing to avoid feeling cramped, save for the up and down arrow keys, each of which are about half the size of the left and right arrow keys. Click action is tight and not spongy, and the two-level backlight (three levels if you count turning it off) facilitates typing in the dark if you need to pull an all-nighter.
We found that the wrist rest area was big enough for our small hands, though if you have larger claws, they might hang off the edge just a tad. Likewise, the precision touchpad is a little short from top to bottom, but makes up for it with a wide area to slide your finger(s).
As for the audio, speakers on the bottom pump out sound, enough to whack your eardrums to the point of slight discomfort if cranking the dial to 100 and sitting right in front of the laptop (or even a few feet away) -- the volume output from this svelte machine is somewhat impressive. The audio is custom tuned by Bang and Olufsen, and there is an accompanying app to play around with EQ settings as well.
We fired up AC/DC's newest album, "Power Up," and oddly enough we found the Rock preset completely ruined the sound quality. By default it is configured with an "HP Optimized" preset, which seems to get the most out of the speakers. Bass response is predictably thin, as is the case on practically every laptop in the world. But overall the audio is passable, and of course there is a 3.5mm audio jack if you want to plug in a set of speakers or headphones. 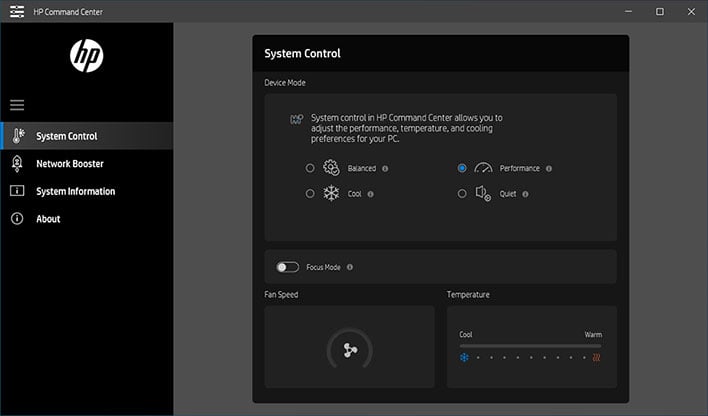 On the software side, the HP Command Center is your hub for tweaking the cooling and performance characteristics. We tested the laptop in Performance mode, which is not shy about spinning up the fan whenever the system thinks it might break a sweat. There are also a few other fan profiles. Here's how they break down...
This utility also houses a Network Booster section to monitor and prioritize certain traffic, and a System Information section in case you need to know the laptop's product number, serial number, BIOS version, and various other identifying bits. 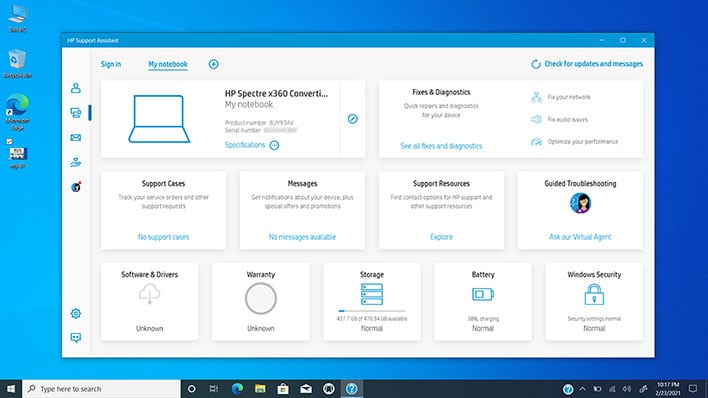 The other main utility is HP's Support Assistant software. This provides a handy dashboard to fetch updates and drivers specific to your laptop, contact support, monitor battery and storage health, look up Windows updates, and so forth. You can also see how much longer your warranty is active within the dashboard.
Our hardware and software tour out of the way, let's dive into the benchmarks...