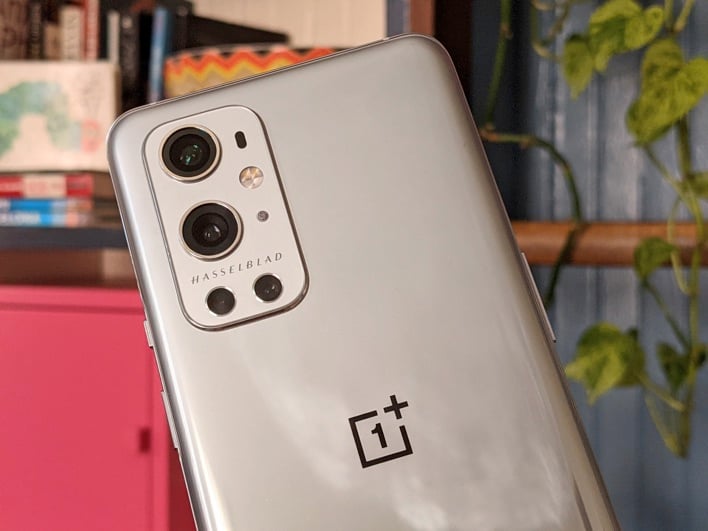 By now, you’ve read the leaks, rumors, buzz and hype. The OnePlus 9 series is finally here, and as always, there’s a lot to talk about. 2020 saw OnePlus launch three flagships, the OnePlus 8 and 8 Pro in the spring, and the 8T (basically an updated OnePlus 8) in the fall. But OnePlus also went down-market with three more handsets last year -- the mid-range Nord and the affordable Nord N10 5G and N100.

If that seems like a lot of devices, it is -- not to mention the TVs, earbuds, and watch. OnePlus is basically following Oppo’s playbook. And after years of obviously sharing tech, the two companies recently consolidated their hardware research teams under one name: OPlus. Yes, OnePlus is playing in the big leagues now and is arguably one of the most important smartphone brands in the US.

This means OnePlus can command higher prices. The OnePlus 9 now costs $729 and the 9 Pro $969. It also means OnePlus can develop partnerships with companies like Hasselblad, which helped tune the OnePlus 9 series cameras. So, as the Oppo-fication of OnePlus continues, how do these phones stand out? Did the company cut any corners? Is the Hasselblad partnership more than just marketing? Let’s dig into what’s hot and what’s not -- and how both handsets differ -- in our full review...

That Hasselblad-branded camera bump is similar on both devices. It's a rounded rectangle located in the top left corner of the glass back that contains two large lenses down the left side, both with a raised silver rim (48MP main and 50MP ultrawide). A 2MP monochrome sensor and triple LED flash are mounted flush below and to the right. The OnePlus 9 Pro adds a fourth shooter (8MP telephoto), third mic, and laser AF module to the pod. 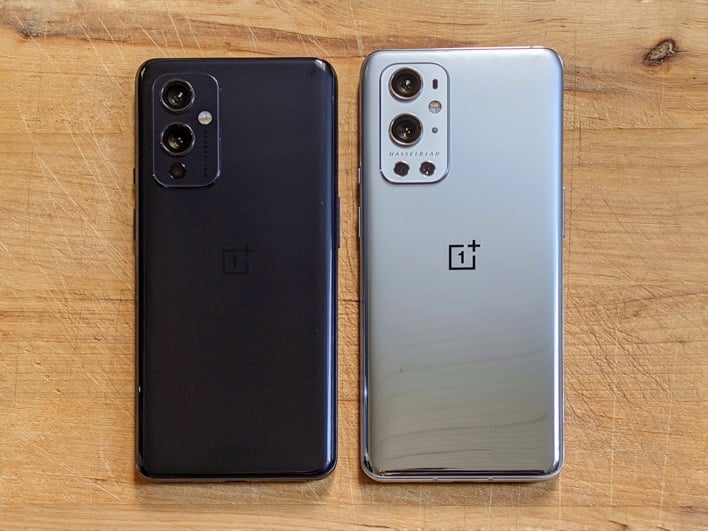 OnePlus 9 (L) and 9 Pro (R)
Bezels are small all around, and both phones have a punch hole for the 16MP selfie camera in the top left corner of the screen. Color options are more muted this year. The OnePlus 9 is available in Winter Mist (purple gradient), Arctic Sky (blue), and Astral Black (like our review unit) and the 9 Pro comes in Morning Mist (silver gradient -- the one we tested), Forest Green, and Stellar Black -- all with color-matched camera bumps.

We’re disappointed with the OnePlus 9's fiberglass-reinforced polymer frame, however. Like Samsung's "glastic" back on the Galaxy S21, this smells of cost-cutting. We just don't think plastic is a flagship-worthy material. It was passable on the mid-range Nord, but last year's OnePlus 8 and 8T have metal frames. Thankfully, the OnePlus 9 Pro’s frame is still aluminum. And we like how the sides of the rear glass is curved, making both handsets easier to grip. 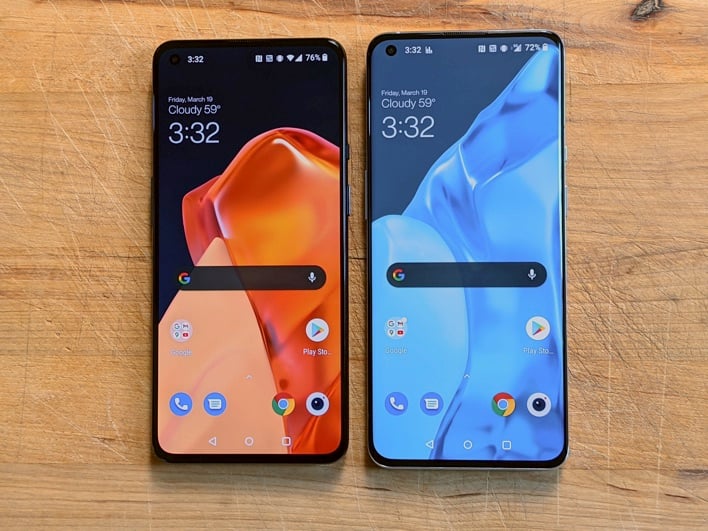 OnePlus 9 (L)  and 9 Pro (R)
The OnePlus 9 Pro is IP68-rated for dust and water resistance, but officially, the OnePlus 9 is not -- unless you buy T-Mobile’s version. Reading between the lines, you’ll probably be fine. Strangely -- and unlike past unlocked OnePlus phones, which are dual SIM devices --  the OnePlus 9 series only take a single SIM. What’s exciting, though, is that the OnePlus 9 joins the 9 Pro in supporting Qi wireless charging (more on this later).

Ports and controls are identical on both handsets. OnePlus’ signature alert slider and the power / lock key are located on the right side, and the volume rocker is mounted on the left. You’ll find a speaker, USB Type-C port (USB 3.1), primary mic, and SIM tray along the bottom edge, plus a secondary mic on top. Obviously, there’s no headphone jack, but the earpiece above the display doubles as a second speaker for stereo audio.


Watch our OnePlus 9 and 9 Pro review video for a hands-on look, then we'll dig in deeper... 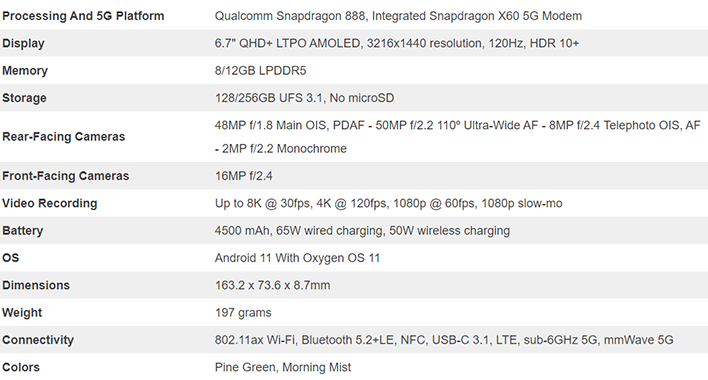 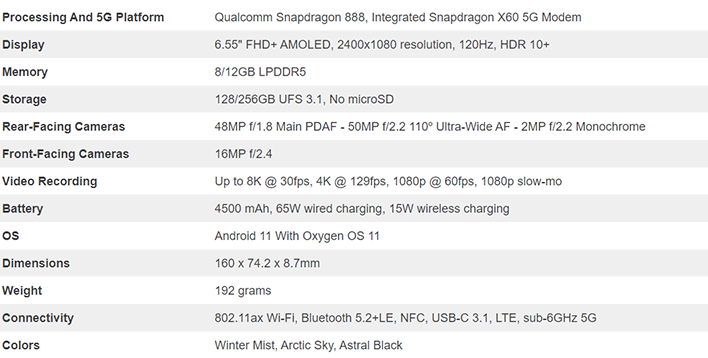 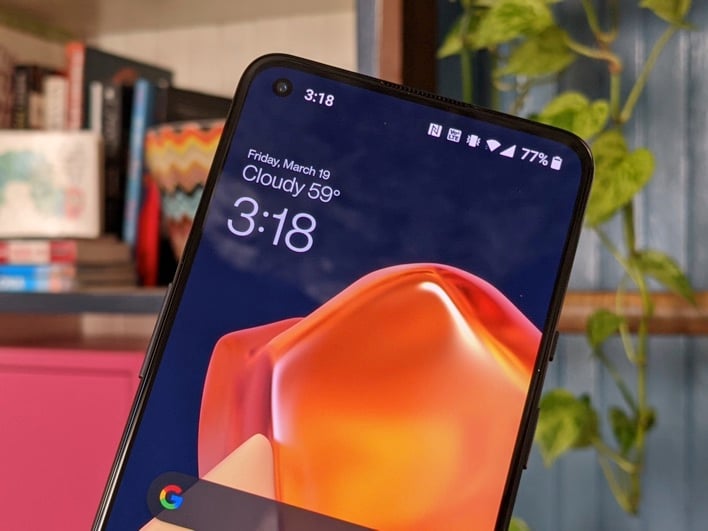 OnePlus 9 display
Specs-wise, the OnePlus 9’s display appears to be lifted right from the OnePlus 8T. The OnePlus 9 Pro -- which shares its screen with the Oppo Find X3 Pro -- uses an LTPO (low-temperature polycrystalline oxide) backplane, which enables adaptive refresh rates (from 120Hz all the way down to 1Hz) for better battery life. Unfortunately, it’s a panel with curved edges, and while it’s only minor here, we’re not fans. 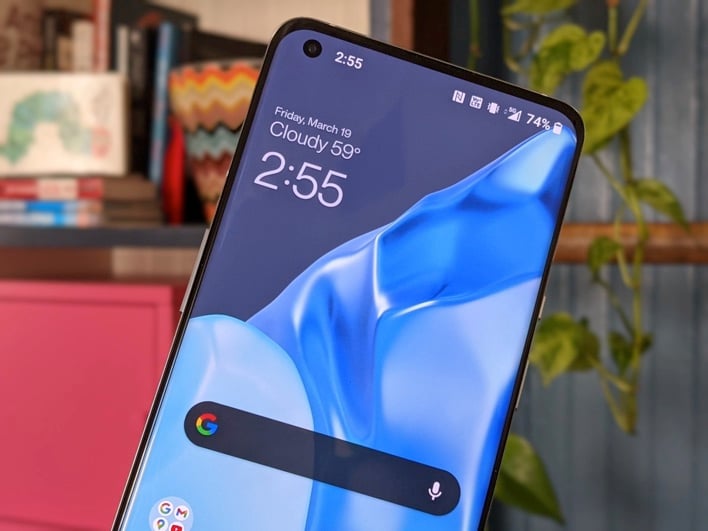 OnePlus 9 Pro display
In all, both displays are bright and beautiful, with punchy yet accurate colors, high contrast ratios, and excellent viewing angles. While the OnePlus 9 Pro’s screen has better specs, we actually prefer the OnePlus 9’s display for its slightly wider viewing angles and warmer color tuning -- not to mention that perfectly flat panel. Then again, we don’t mind the 1080p resolution, but it might be too low for some of you. Either way, you can’t go wrong here.

Here’s where things get interesting. Let’s start with what these handsets have in common, then focus on the differences. Both share the same ultrawide camera, with a 50MP 1/1.56-inch 1.12-micron Sony IMX 766 sensor and an f/2.2 110-degree freeform lens. That’s also the same sensor found on both the main and ultrawide shooters on the Oppo Find X3 Pro. Fitted with AF, this lens doubles as a macro for closeups shots (up to 4cm / 1.57 inches). It’s a significant improvement over the OnePlus 8 and 8T’s fixed-focus 2MP macro.

Obviously, this sensor “bins” (combines) four pixels into one for better low-light performance, and outputs 12.6MP images by default. These two phones also share a 2MP f/2.2 1.75-micron monochrome lens to assist the main shooter when taking monochrome pictures, and a 16MP f/2.4 1.0-micron selfie camera, along with a triple-LED dual-color flash. 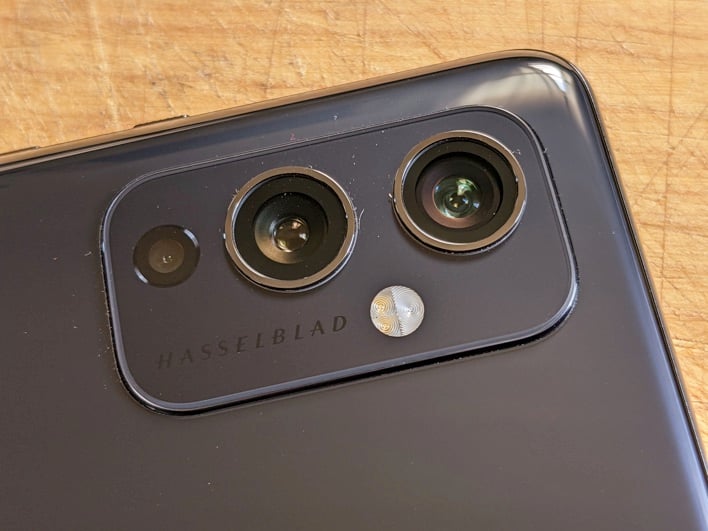 OnePlus 9 Camera Pod
It’s with the main shooters that things diverge. On the plus side, the OnePlus 9 inherits the OnePlus 8 Pro’s excellent 48MP 1/1.43-inch 1.12-micron Sony IMX 689 main sensor -- complete with 12-bit RAW support and a 2x2 on-chip lens (for faster PDAF). For some unfathomable reason, though, that f/1.8 main lens lacks OIS. The OnePlus 8 and 8T have OIS -- even the mid-range Nord has OIS. Not only is this kind of cost-cutting disappointing for a flagship, but it really puts the Hasselblad partnership into question.
The OnePlus 9 Pro’s main camera uses Sony’s IMX 789 -- a brand new (and unique to OnePlus, for now) 48MP 1/1.43-inch 1.12-micron sensor. Like with Sony’s IMX 689, there’s 12-bit RAW support and a 2x2 on-chip lens (for faster PDAF). While these two sensors look almost identical on paper, the IMX 789 adds DOL-HDR (digital overlap HDR) for video capture. And we’re glad to report that this sensor is paired with a f/1.8 lens with OIS.
You might be scratching your head about why OIS is such a big deal when EIS (electronic image stabilization) is decent these days, but you can’t beat optics. It’s like driving a car with ESC (electronic stability control) -- it will help up to a point, but you can’t cheat physics. Likewise 3x optical zoom is always better than 3x digital zoom -- or even a 1.1x optical zoom lens and a cropped 64MP sensor, like on Samsung’s Galaxy S21 and S21+.

Before we talk about zooming, both main shooters use 4-to-1 pixel binning to improve low-light photography, resulting in 12MP shots by default. The OnePlus 9 Pro also offers a fourth camera -- a proper 8MP f/2.4 1.0-micron 3.3x telephoto with OIS. So while the OnePlus 9 makes compromises -- no OIS, no telephoto -- the 9 Pro checks all the right boxes.

Which brings us to that collaboration with Hasselblad. According to OnePlus, this is a 3-year partnership that starts with unique software tweaks (color tuning and sensor calibration) on the OnePlus 9 series, and will eventually lead to custom hardware development (like bespoke lenses). It also impacts the camera app, with the pro (manual) mode benefiting from Hasselblad’s unique look and feel, like the orange shutter button.

Photo modes are pretty standard. There’s super macro (which kicks in automatically, but can be overridden), high-res (48/50MP), portrait, night, pro (manual, with 12-bit RAW and focus peaking), panorama, and tilt shift. There are some caveats, however. Night mode doesn’t support the selfie camera, or any magnification beyond 1x (nor the telephoto on the OnePlus 9 Pro), and pro mode only works with the main shooter. 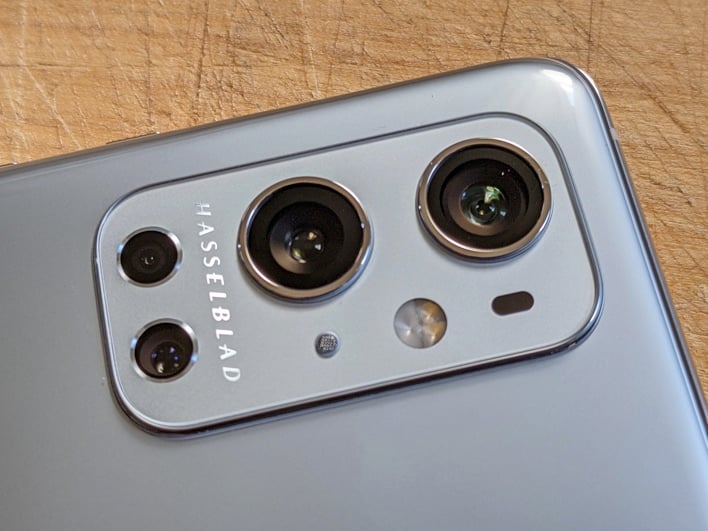 Both handsets capture stabilized video with stereo audio, and max out at 8k 30fps, 4k 60fps (4k 120fps on the OnePlus 9 Pro), and 1080p 60fps with the main and ultrawide shooters, and up to 1080p 60fps with the selfie camera. Other video modes include super stable (up to 4k 30fps), night (1080p 30fps), portrait (1080p 30fps), hyperlapse and time lapse (up to 4k 30fps), plus slow motion (1080p 240fps or 720p 480fps). Some modes also support 21:9 video recording.
By now, you’re probably wondering how these camera systems perform -- especially with that Hasselblad branding on the back. The good news is that both devices take really nice photos and videos. But unfortunately, we can’t put our finger on that Hasselblad color tuning. Perhaps it’s very subtle, but on Huawei phones for example, we immediately notice Leica’s touch.
Like with Xiaomi’s Mi 11, we’d slot the OnePlus 9 Pro right below Samsung, Apple, Google, and Huawei’s best. The OnePlus 9 slides further down the podium for lacking OIS (resulting in softer low-light pictures) or a telephoto (compromising anything beyond 2-3x zoom). We’re particularly happy with the ultrawide, though. It takes impressive photos, especially in low light. No wonder the Oppo Find X3 Pro uses this sensor for both its main and ultrawide shooters.

Macro shots also benefit from this sensor (and AF), though we found it tricky to nail focus at times. We’re also satisfied with the OnePlus 9 Pro’s main camera, which matches the ultrawide in terms of color balance and overall performance. The OnePlus 9’s main shooter takes softer photos in low-light (as expected, without OIS), but both devices are a close match in daylight, with natural colors and accurate exposure.

Obviously, the telephoto gives the OnePlus 9 Pro a huge advantage when zooming beyond 2-3x. With only 48MP to play with, anything past 5x quickly turns into a blur on the OnePlus 9. In fact, while the OnePlus 9 maxes out at 10x zoom, the 9 Pro lets you zoom up to 30x, not that we’d recommend going that far -- it’s no 5x periscope camera, after all. Still, 10x zoom on the OnePlus 9 Pro results in images that are perfectly acceptable.

Selfies are decent, but not spectacular. The OnePlus 9 series’ lack of 4k 30/60fps selfie video recording is rather odd, considering these are flagships, and even the mid-range Nord supports it. Another niggle is that the ultrawide exhibits significant lens flaring in night mode. Speaking of which, it’s annoying that you can’t zoom in 2-3x (or use the OnePlus 9 Pro’s telephoto) in night mode. We also wish pro mode worked with the ultrawide.