Superposition is a relatively new benchmark from Unigine, powered by the UNIGINE 2 Engine. It offers an array of benchmark modes, targeting gaming workloads as well as VR, with both DirectX and OpenGL code paths. 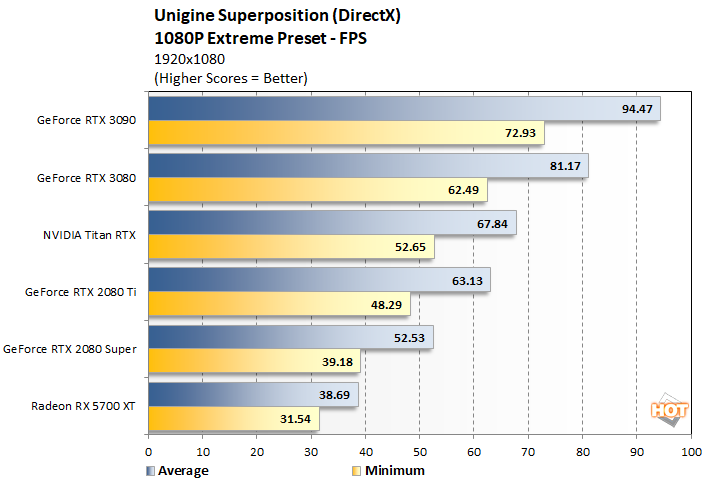 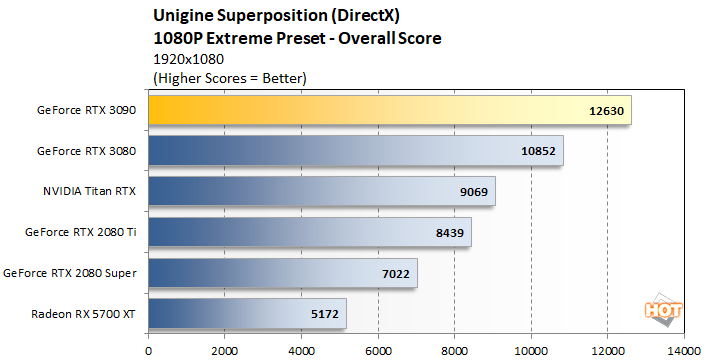 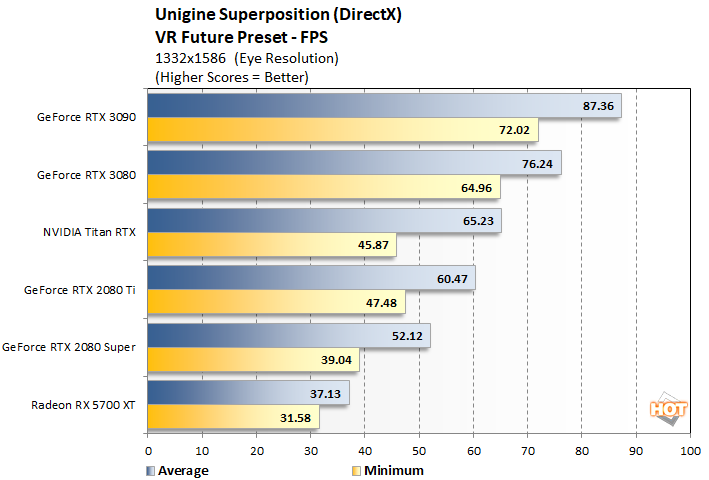 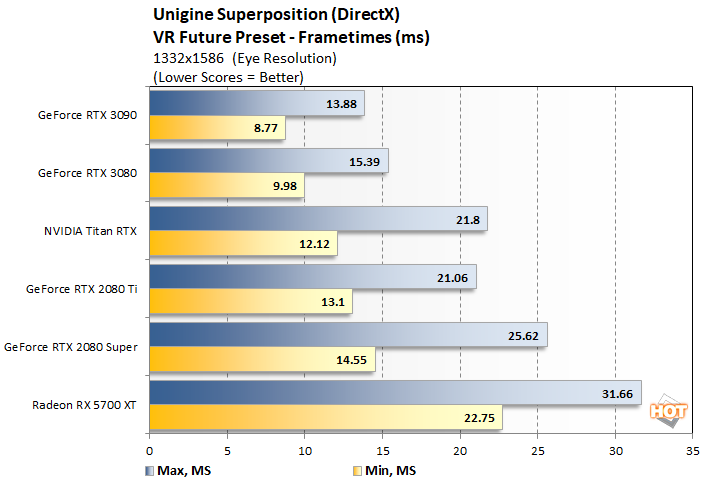 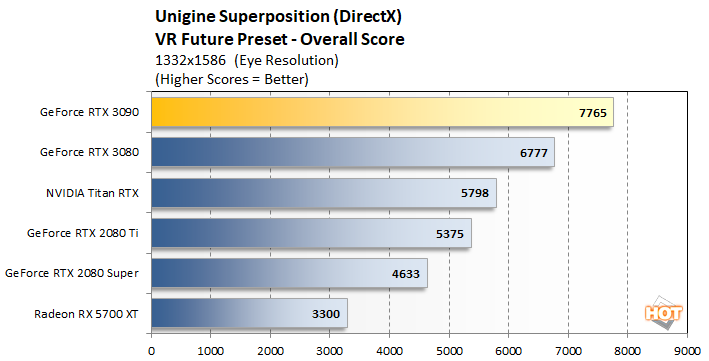 The overall performance trend remains the same with Superposition's VR Future test, but the deltas separating the cards shrink somewhat. Here, the GeForce RTX 3090 is only about 14.5% faster than the RTX 3080. It is still much faster than the Titan RTX, or anything else below it for that matter.

If we crank things up to 8K resolution (at least virtually -- the benchmark uses resolution scaling to evaluate 8K in lieu of an actually monitor capable of displaying the resolution), the GeForce RTX 3090's leads over the RTX 3080 and Titan RTX jump back up to over 19% and 37%, respectively. 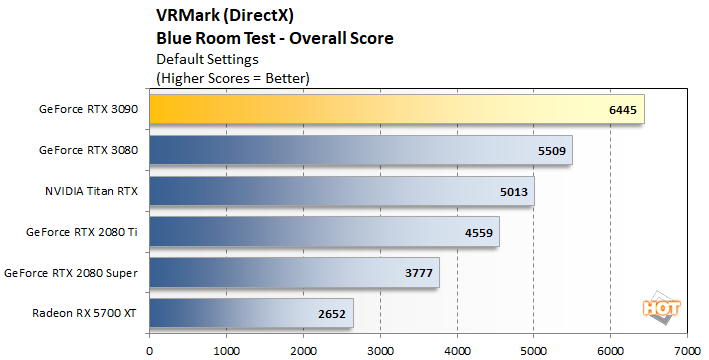 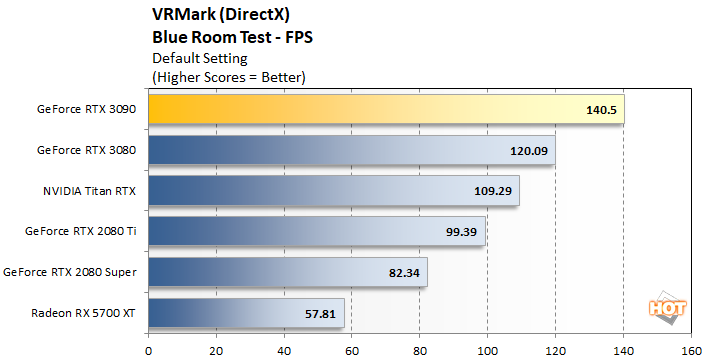 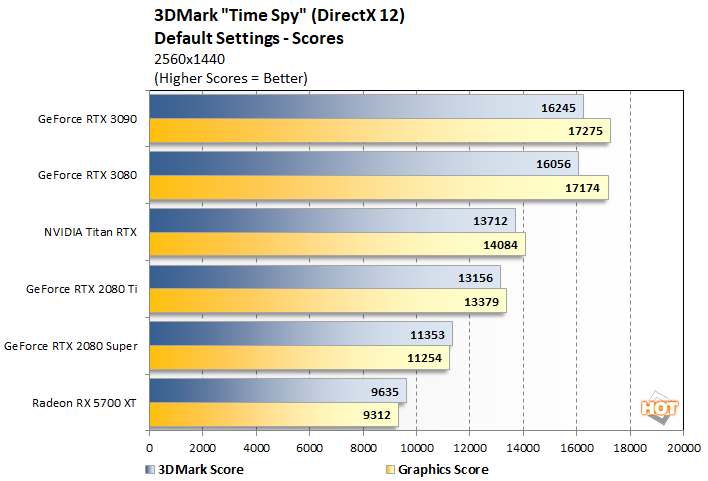 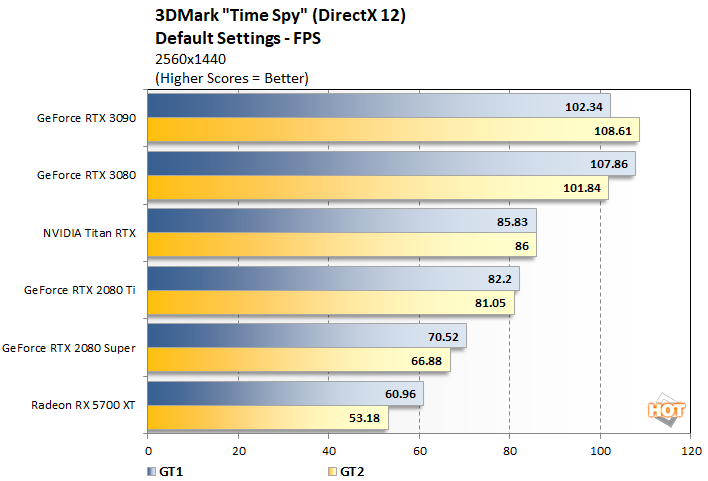 In the default DX12-based 3DMark Time Spy benchmark, the GeForce RTX 3080 and RTX 3090 are effectively CPU bound, with only 1.1% separating the two cards. The Titan RTX, however, falls victim to the GeForce RTX 3090 by about 18.5%.
3DMark Fire Strike has multiple benchmark modes: Normal mode runs at 1920x1080, Extreme mode targets 2560x1440, and Ultra mode runs at a 4K resolution. GPU target frame buffer utilization for normal mode is 1GB and the benchmark uses tessellation, ambient occlusion, volume illumination, and a medium-quality depth of field filter. The more taxing Extreme mode targets 1.5GB of frame buffer memory and increases detail levels across the board. Ultra mode is explicitly designed for CrossFire / SLI systems and cranks up the quality even further. GT 1 focuses on geometry and illumination, with over 100 shadow casting spot lights, 140 non-shadow casting point lights, and 3.9 million vertices calculated for tessellation per frame. GT2 emphasizes particles and GPU simulations. 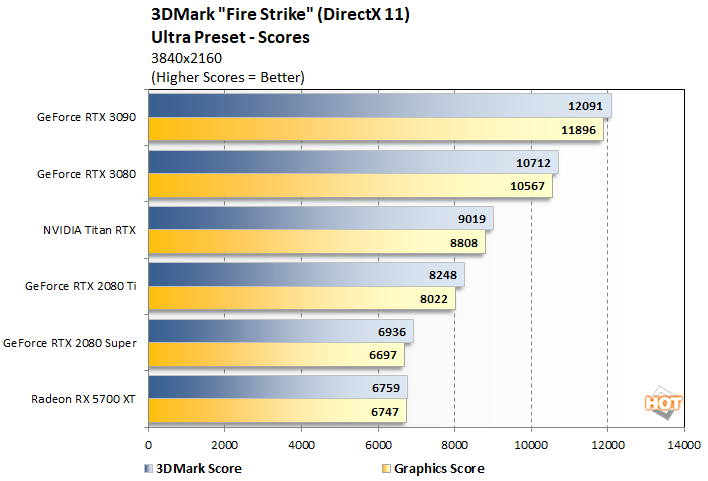 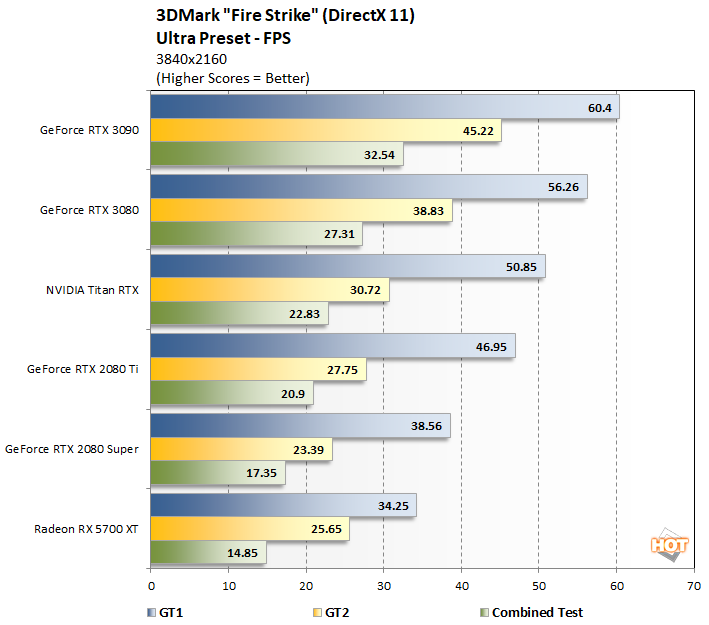 Our results in the DX11-based Fire Strike benchmark have the GeForce RTX 3090 finishing in the overall lead yet again, with scores 13% and 34% better than the GeForce RTX 3080 and Titan RTX, respectively, and nearly double the Radeon RX 5700 XT.

Port Royal was released around the same time Turing hit the market, as an update to UL’s popular 3DMark suite. It is designed to test real-time ray tracing performance of graphics cards that support Microsoft DirectX Ray Tracing, or DXR. Although DXR is technically compatible with all DX12-class GPUs, the graphics card must have drivers that enable DXR, and NVIDIA is the only company to have done so at this point, hence the lack of Radeons in the chart. Hopefully, that changes soon when RDNA2-based Radeons are announced late next month.

By this point, we must be sounding like a broken record, but the numbers are what they are. With 3DMark's Port Royal ray tracing test, we see the GeForce RTX 3090 finishing in the lead yet again, out in front of the GeForce RTX 3080 by roughly 14.4%.

Crytek’s Neon Noir demo was created with an advanced version of CRYENGINE’s Total Illumination technology, which will be used in the upcoming Crysis Remastered to enhance the game’s visuals. Neon Noir was developed on a customized version of CRYENGINE 5.5., and is both API and hardware agnostic. It enables ray tracing to run on virtually any modern GPU, however, future integration of the technology will be optimized for the latest GPUs and APIs like Vulkan and DX12. 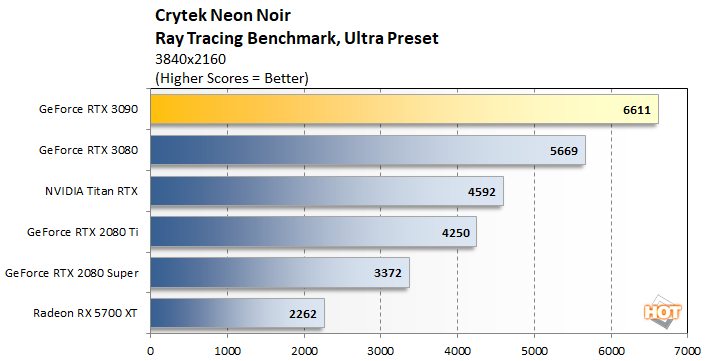