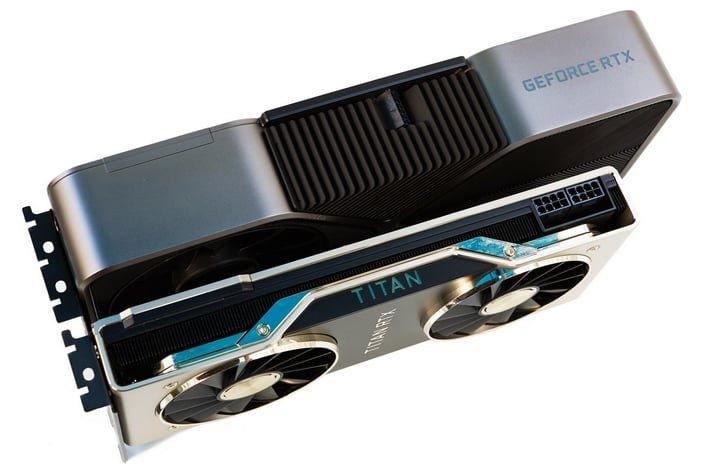 SANDRA's GPGPU Image Processing benchmark runs through an array of filters on its reference data and offers up an aggregate score, derived from a multitude of individual results. The Scientific Analysis benchmark runs though an array of General Matrix Multiply (GEMM), N-Body Simulations (NBDY), and Fast Fourier Transformation ops and reports the overall speed in FLOPs. CUDA and OpenCL code paths are available in these tests, but we used OpenCL on all cards to keep the playing field level. Previously, using the CUDA code path with NVIDIA GPUs resulted in better performance, but OpenCL actually outperforms it in these tests now... 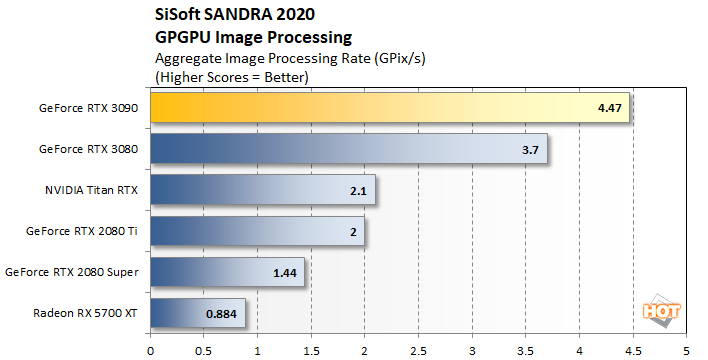 The GeForce RTX 3090 starts with a big lead right out of the gate in the SANDRA GPGPU image processing benchmark, outpacing the RTX 3080 by 21% and more than doubling the performance of the Titan RTX and 2080 Ti. 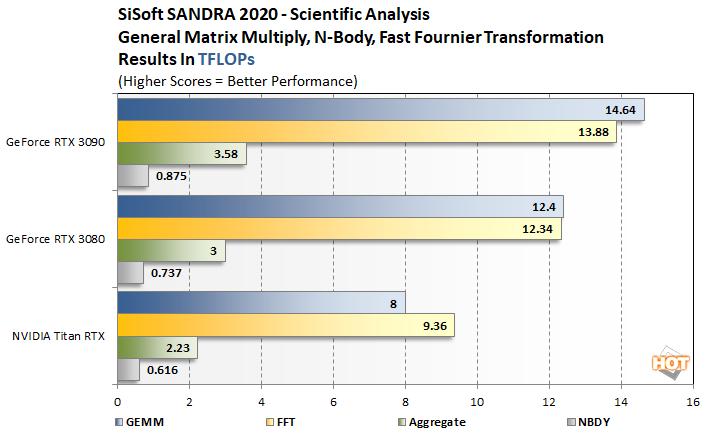 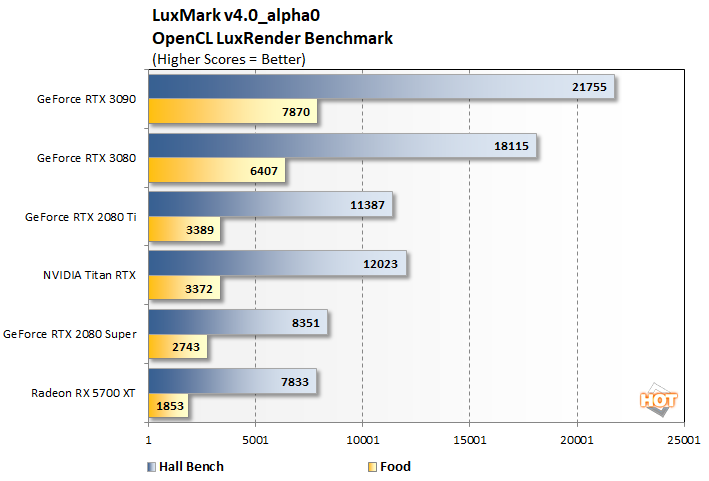 In the latest (alpha) version of Luxmark, the GeForce RTX 3090 once again lands in the pole position, outrunning the GeForce RTX 3080 by about 21% and roughly doubling the Titan RTX's performance, give or take a few percentage points depending on the particular model being used. 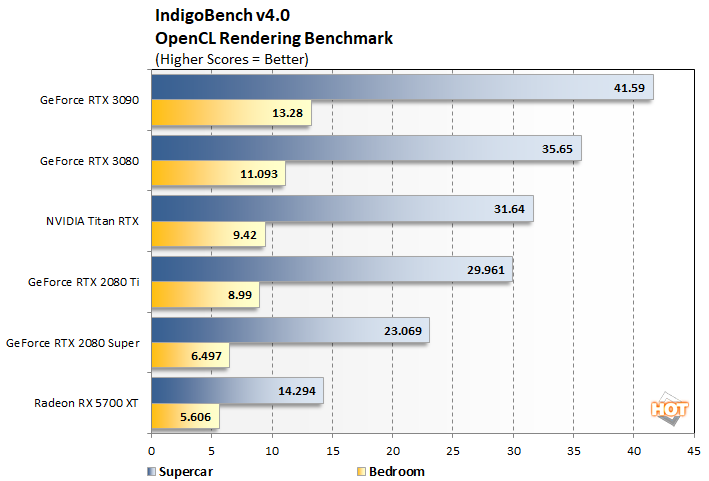 The GeForce RTX 3090 leads the pack in IndigoBench, but by relatively small margins. Here, NVIDIA's new flagship is about 16.6% faster then the RTX 3080 and roughly 31% faster than the Titan RTX. Obviously, the "lower end" cards fall in line after that.

Blender is a free, open source 3D content creation tool that can handle everything from modeling, rigging, animation, simulation, rendering, compositing and motion tracking. It's developers have built a handy standalone benchmarking tool that will track the time it takes to rendering a handful of models, using various code paths. We used a couple of publicly available models for the public benchmark, but also ran a more taxing workload to highlight one of the GeForce RTX 3090's strengths.

In the two charts above, we have results from BlenderBench using the Classroom and BMW models, using either the CUDA or OPTIX code paths. CUDA obviously leverages the GeForce's CUDA cores, while OPTIX also incorporates the RT engines. Here, the GeForce RTX 3090 is about 16% faster than the RTX 3080 when using CUDA. That lead shrinks down to the less than 5% using OPTIX. However, both cards are much faster than the Titan RTX.

Moving over to a larger, much more complex model and performing a simultaneous viewport and final renders with Blender tells a totally different story. With this workload, the GeForce RTX 3090's additional compute resources and 24GB frame buffer come into play, and it ends up being roughly 3x - 4x faster than the GeForce RTX 3080 or Titan RTX.

OTOY's OctaneBench is a standalone tool that gives users the ability to benchmark CPUs or NVIDIA GPUs using the company's OctaneRender engine. This tool leverages the RT cores inside the GPUs when available and runs through a series of models to produce an overall, average score. Like Blender, we also used the actual OctaneRender application to tests a heavier workload than what is included with the standard benchmark.