Despite it already being the fastest GPU we've tested, we spent some time overclocking the GeForce RTX 3090 to see what kind of additional performance we could coax out the card...

Ampere-based GeForce RTX 30-series cards like the GeForce RTX 3090, and the previous-gen Pascal and Turing-based GPUs that came before it, feature GPU Boost. GPU Boost scales frequencies and voltages up or down based on the GPU's workload and environmental characteristics at the time, within predetermined limits. Should a temperature or power limit be reached, GPU Boost will drop down to a lower boost frequency/voltage level, in an attempt to bring power and temperatures down gradually and not cause and significant swings in performance. That maximum boost clock can be tweaked and tuned to wring more performance from most GeForces, however, to some extent. 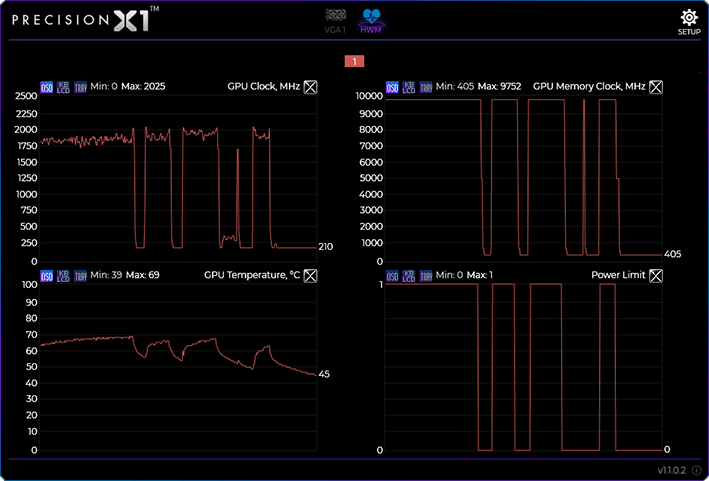 As we've mentioned in some of our previous coverage, NVIDIA has segmented the core and memory power rails and optimized interfaces on RTX 30-series cards to preserve signal integrity and ensure adequate power delivery, which are two things that technically should help with overclocking. That said, like previous-gen Turing-based cards, the Ampere-based GeForce RTX 30-series is functionally power limited to prevent damage and ensure longevity -- which will limit of any hardcore overclocking efforts. 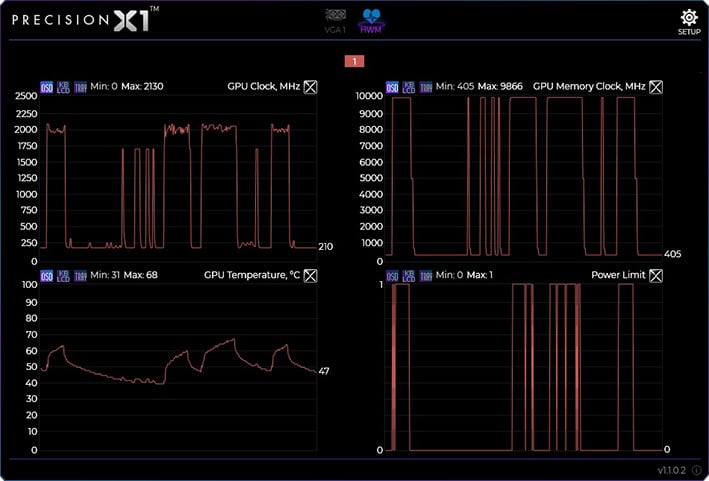 We kept things simple while overclocking our RTX 3090 sample. We used the frequency and voltage offsets, and the power and temperature target sliders available in the latest version of EVGA's Precision X1, to push the card beyond its stock configuration. First, we turned up the temperature and power targets, and voltage, then we bumped up the GPU and memory clock offsets until the test system was no longer stable, showed on-screen artifacts, or performance peaked due to hitting the power limit. 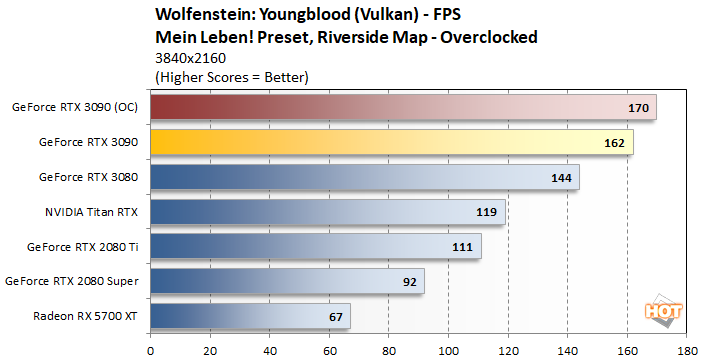 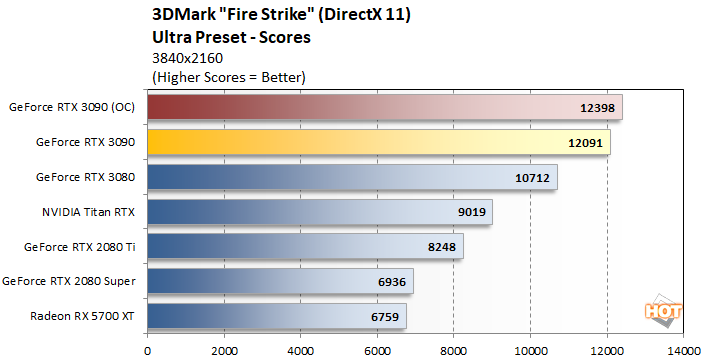 We were bumping into the card's power limit in its stock configuration, but massaging the sliders got us a bit of extra performance. Ultimately, our card's GPU topped out at over 2.1GHz with an effective 19.7Gbps memory data rate.

Before bringing this article to a close, we'll cover a couple of final data points regarding power consumption and acoustics. Throughout all of our benchmarking and testing, we monitored noise output and tracked how much power the GPU's were consuming using NVIDIA's PCAT device. Our goal was to give you an idea as to how much power each GPU used while idle and also while under a heavy workload. These power numbers were captured over the duration of an entire 3DMark Fire Strike run, including the full demo, and are indicative of the GPU alone -- not the entire system... 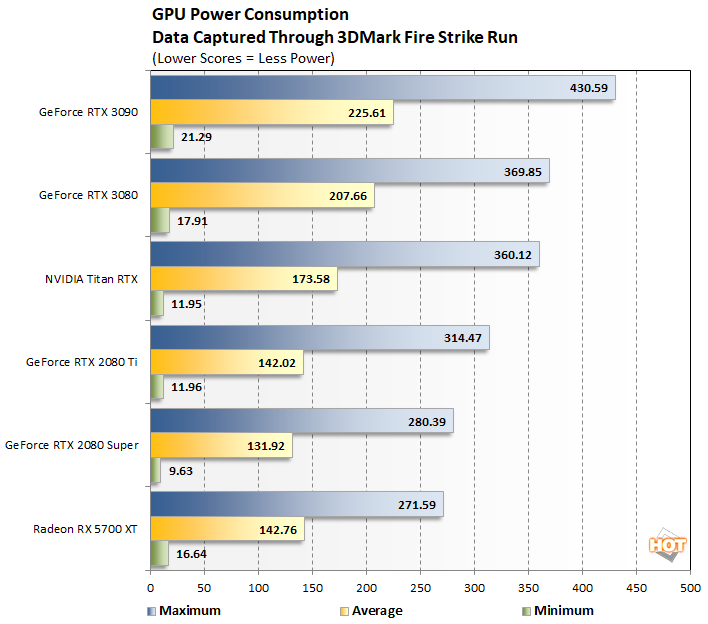 The GeForce RTX 3090 consumed the most power, across the board. Idle, Average, and Peak power were all higher than the GeForce RTX 3080, which is to be expected, considering the burlier RTX 3090's higher performance, additional GPU and memory resources, and the fact that both cards leverage the same technology.

All of that extra power doesn't translate into higher temperatures, though. Throughout our testing, whether stock or overclocked, the GeForce RTX 3090 hovered in the high-60°C to low-70°C range.


The Ampere-based GeForce RTX 3090's power consumption may be higher than its predecessors, but with its relatively low operating temperatures, noise will likely be non-issues for most users, at least with the Founder's Edition card we tested. 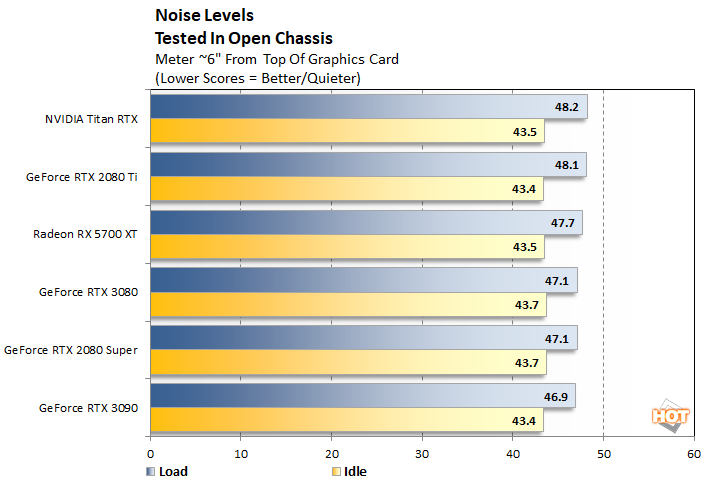 None of the GPU tweaking utilities available at the time of publication allowed us to manually alter the GeForce RTX 3090's fan speeds (EVGA Precision X1 worked with the 3080). With its out-of-box fan curve, however, the GeForce RTX 3090 is whisper quiet. In our test rig -- which is assembled inside a standard mid-tower, with CPU (Coolermaster), case (NZXT), and PSU (Corsair HX) fans -- the GeForce RTX 3090 was the quietest card of the bunch. The card's massive heatsink assembly and large fans go a long way to keeping things cool and quiet. 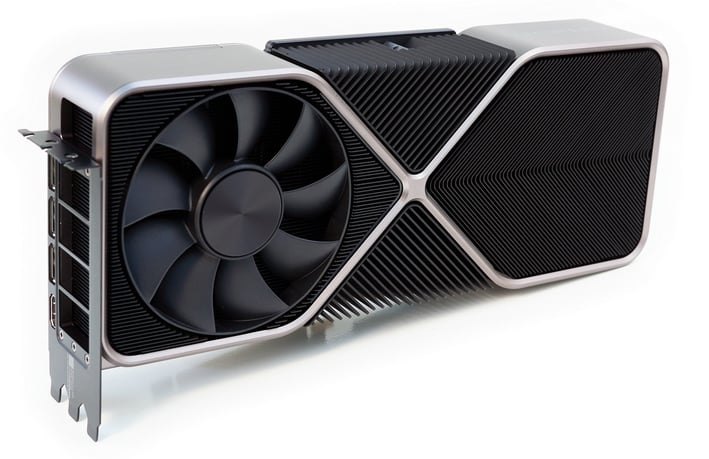 Obviously, the  $1,499 GeForce RTX 3090 Founder's Edition isn't an overall value play for the vast majority of users. If you're a gamer shopping for a new high-end GPU, the GeForce RTX 3080 at less than 1/2 the price is the much better buy. Compared to the $2,500 Titan RTX or $1,300 - $1,500-ish GeForce RTX 2080 Ti though, the GeForce RTX 3090 is the significantly better choice. Your perspective on the GeForce RTX 3090's value proposition is ultimately going to depend on your particular use case. Unless they've got unlimited budgets and want the best-of-the-best, regardless of cost, hardcore gamers may scoff at the RTX 3090. Anyone utilizing the horsepower of the previous generation Titan RTX though, may be chomping at the bit.

The GeForce RTX 3090's ultimate appeal is going to depend on the use-case, but whether or not you'll actually be able to get one is another story. The GeForce RTX 3090 is going to be available in limited quantities today -- NVIDIA said as much in yesterday's performance tease. NVIDIA pledges to make more available direct and through partners ASAP, however. We'll see how things shake out in the weeks ahead, and all bets are off when AMD's makes its RDNA2 announcements next month. NVIDIA's got a lot of wiggle room with Ampere and will likely react swiftly to anything AMD has in store. And let's not forget we still have the GeForce RTX 3070 inbound, which is going to have extremely broad appeal if NVIDIA's performance claims hold up.

If you have more questions you'd like answered regarding Ampere, the GeForce RTX 3090, or RTX 30-series in general, be sure to hit our YouTube channel later today. We have NVIDIA's Tony Tamasi, VP of Technical Marketing joining us for a live webcast, which should be fun.