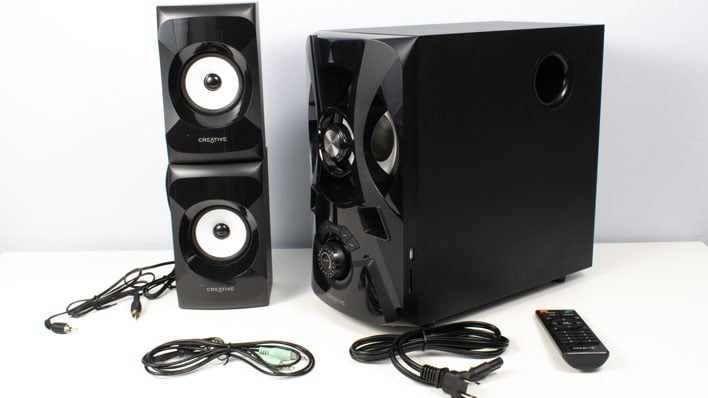 While Creative Labs has expanded its product offerings into other arenas, the company has never waivered from its core competency: PC and home audio. The Sound Blaster maker has almost always offered speaker systems to pump out the audio from our favorite PC and console games. Today, that tradition lives on with Creative marketing a wide variety of discrete speaker systems and sound bars, at a wide variety of price points. The SBS E2900 2.1 speaker set we'll look at today sits well above the entry-level Pebble speakers, but a bit below the Sound BlasterX Katana sound bar. Creative primarily aims these speakers at gamers, but there's a whole lot of additionally functionality tucked into this package.

At first glance, the SBS E2900 might look like a compact speaker system with tiny satellites and a small sub, but in person it's much bigger. Those satellites measure 4.13 x 3.94 x 6.7 inches (or 105 x 100 x 170 millimeters). That four inches in girth makes plenty of room for a pair of full-range 3" drivers. There's no dedicated tweeter in each satellite, which will make it difficult to articulate every little nuance in high-quality music files. We'll see if that matters in our listening tests. Meanwhile, the sub's 6.69 x 13.19 x 12.32 inch (170 x 335 x 313 mm) footprint would rival a small micro ATX tower in size. The subwoofer's cone only measures 5.25", it fires forward and has a side port on the right. Overall the system is rated for a peak power output of 120 Watts, or 60 Watts RMS sustained. That's divided up as 15 Watts RMS for each satellite and 30 Watts for the sub. It should get pretty loud.

Connectivity is where Creative Labs knocked it out of the park on the SBS E2900. To start with, there's the expected 1/8" aux input jack, which will connect to any sound card or built-in audio solution on just about every PC on the planet with the included 1/8" stereo cable. However, Creative also outfitted the system with an FM antenna, Bluetooth 4.0 audio, an SD card slot, and a USB port. While the FM tuner might seem like an odd inclusion, the combination of media and radio means that the SBS E2900 could be a standalone music system of sorts. 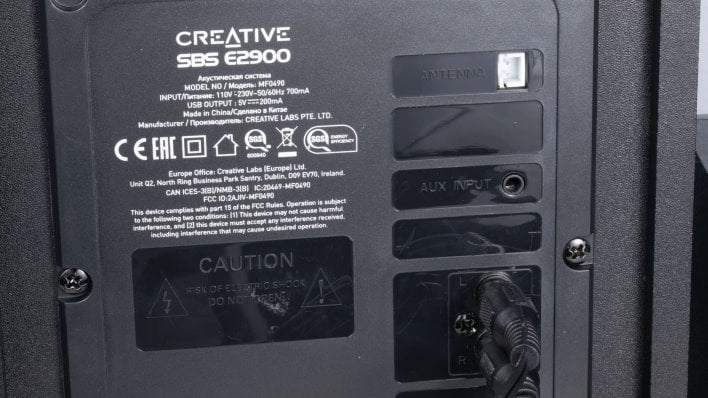 To control the speakers, Creative put some basic controls on the front of the sub that includes a jog wheel for volume and basic play, pause, and navigation buttons for media controls. For anything more advanced, including the built-in EQ, we had to use the included remote control. A bit bigger than a typical Roku remote, the unit mirrors the same controls, along with FM tuner controls, input selection, number buttons for direct input, and LED toggle for the sub's built-in lighting. For those not interested in LEDs, the lighting can be disabled. There's also a Tone button to walk through the E2900's two-band tone control equalizer.

Both the SD and USB ports are used for media playback. Unfortunately, the SBS E2900 only handles MP3 playback, so FLAC enthusiasts and Apple's AAC-encoded audio from purchased iTunes collections need not apply. However, it handled all of the various MP3 encoding options we threw at it, including 320 kbps static bitrate and max 320 kbps VBR. Bluetooth worked great with both our Galaxy S20 Fan Edition and an iPhone 12 Pro. We could wander the whole house without totally losing connection, although once we were around 25 feet away and going through multiple walls we would hear a skip now and then. That's not a knock on the Creative speakers, just a limitation of Bluetooth. It works best in the same or an adjoining room, of course.

A speaker system was a great feature set means little, if the audio it produces isn't good. As we said before, Creative targets these speakers at gamers. On that front, they do pretty well. However, before we proceed, we've got to be up-front about something. My every-day speakers are a pair of KRK Rokit RP5 G4 studio monitors driven by the Sound BlasterX AE-9. The KRKs have a nearly-flat frequency response which makes them great for audio production and a (nearly) perfect reproduction of what was recorded. That whole setup costs around $550, so it's not fair to compare the Creative SBS E2900 speakers to it. However, our ears are used to that nicely balanced audio, so they provide a high-quality frame of reference. If we were coming from a pair of $20 generic speakers, literally anything else would sound wonderful. We'll try to keep the price difference in mind. We did keep an even playing field by plugging these speakers into the Sound BlasterX for comparison. 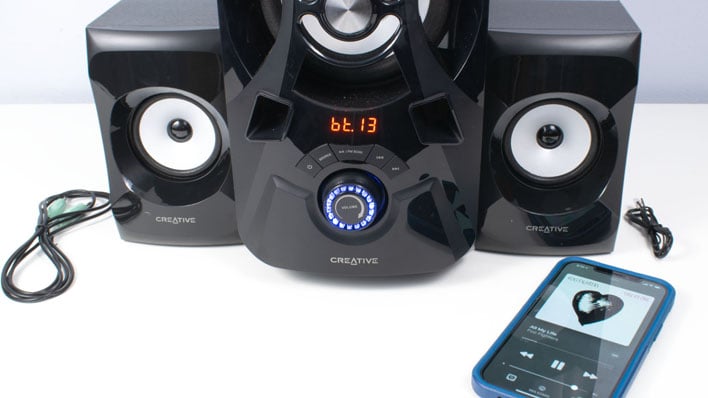 The ported, front-firing subwoofer pumps out the bass, and the satellites do a nice job handling midrange and highs. However, by default we felt like the highs were a little rolled off and the bass was exaggerated. A single 5.25" sub with a 30 W rating can produce some low frequencies, but the lowest of the lows start to disappear.

Creative says the whole system can produce sounds from 50 Hz to 20 kHz. However, once the frequency drops below around 87 Hz (the E below the bass clef, for those who read standard notation) it starts to fall off a little. The result is that the SBS E2900 sounded a tad "boxy" because of the missing high-frequency information, and a little "boomy" due to the exaggerated bottom end. Creative doesn't advertise the crossover frequency between the satellites and sub, but it might be a little higher than it needs to be, robbing the system of the bass' impact and causing low-mids to be a little extra loud.

Our office isn't a perfectly treated studio, but neither is the spare bedroom that someone might turn into a game room. Some of this can be fixed with the built-in equalizer, which we'll do in a bit when we talk about music. Turning the treble to +3 or so brought back the highs to where we expected them to be. Turning the bass down slightly, even to -1 or -2 on the dial, took the "boom" out of the sub. While it's still not a perfectly flat response, it's certainly good enough for a pair of $100 speakers. Still, they're missing a certain je ne sais quoi when it comes to music. We could hear each instrument in some of our favorite mixes, but we think that for the most discerning listeners, the lack of tweeters hurts the system, but again, we have to consider the price. For those in the market for an upgraded set of PC speakers who want to get them for around $100, we think that anybody who currently has no sub or a weaker sub (Creative's own $40 Pebble Plus comes to mind) will be very happy with the huge uptick in quality.

Our listening tests covered a variety of games and music genres that included Stardew Valley to Cyberpunk 2077 and Mozart to Metallica. Once we got the EQ set where we liked it, it was time to play some games. We're still working our way through the later stages of Cyberpunk 2077, and the SBS E2900 let us feel the impact of every gunshot and invisible car running us over, while also clearly hearing dialogue. Creative says these are aimed at gamers of all stripes, and we can certainly see why. Not only are they a nice pairing with a gaming PC, they're also a substantial and relatively inexpensive upgrade for anybody playing console games on their TV while using its integrated speakers. As long as the TV has a headphone jack, the included 1/8" cable will connect easily enough. Those who have RCA outputs would need to pick up an inexpensive RCA to 1/8" cable from any electronics store. 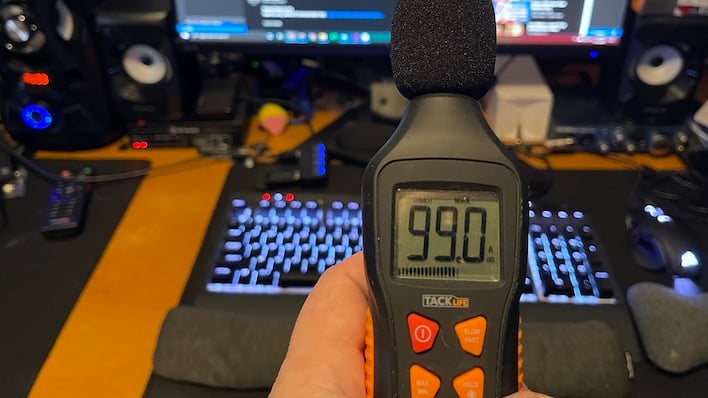 The dynamic range of the SBS 2900 is pretty high, too. Volume is one area that Creative didn't compromise, and we have the sound meter readings to prove it. We've already mentioned the 60 W RMS rating for this set, which is split as 30 W for the sub and 15 W a piece for each of the satellites. The SBS E2900 certainly lives up to this billing, as these things get loud when cranked. We fired up some of our favorite songs and broke out the sound meter. Holding the meter in our usual listening position where the speakers are approximately 35" from our ears and cranking everything to the max, we measured 100+ dBA peaks while listening to The Beastie Boys' Ill Communication (Sabotage and Sure Shot really take us back to simpler times). While it's not loud enough to drive us from our office, it's definitely loud enough to fill the room with sound. Better yet, we heard very little distortion at these levels, so the amplifier isn't overdriving the speaker cones. That's not as high as the 120 dBA we measure in the same location with our KRKs, but again, that's a much more expensive setup.

The SBS E2900 is a speaker set that includes everything but the kitchen sink. Creative Labs outfitted these speakers with a ton of connectivity from an FM antenna to Bluetooth to media playback via SD and USB. This adds utility to a beefy set of midrange gaming speakers that we don't often see. A 60 Watt RMS power rating implies that they should be able to fill a room, and they can do exactly that. They get big, they get loud, and best of all they don't distort the audio to unacceptable levels. We were impressed, especially considering their $99 price tag. 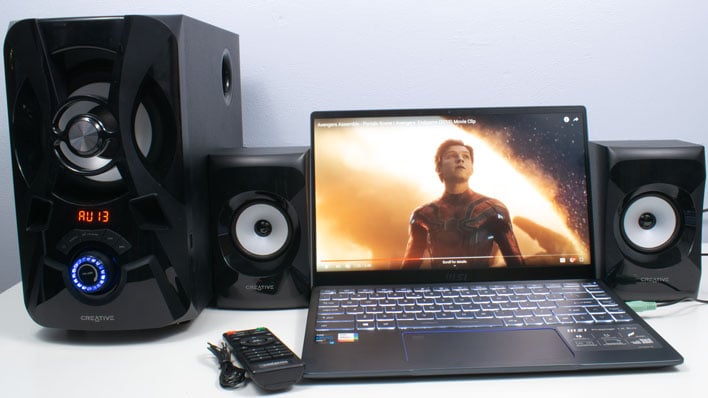 No speakers are worth anything if they don't sound good, however. Out of the box we weren't totally happy with the SBS E2900's sound, but it wasn't far off from what we desired. After a little EQ tweaking, this 2.1 setup put out some pleasant, detailed sound. The 3" full-range drivers do their best to articulate every detail of a high-quality audio track, and while there's a little something that you just can't get without a discrete tweeter, they sound pretty darn good. When we consider their price, "pretty good" becomes "excellent". It was unfair of us to compare them to studio monitors, but it's what we had on hand. While they don't quite compare to speakers that cost nearly four times as much, there's no reason they should. Still, Creative's speakers held their own and pumped out loud, un-distorted audio when we asked them to.

Overall, Creative has a very nice package in the SBS E2900. For $100 we expect much more volume than low-end PC speakers and plenty of bass, and that's exactly what it delivers. There's bonus features including MP3 playback on tap, and that's something you can't get in competing 60-Watt speakers like Logitech's z533 or inexpensive monitors like the Presonus Eris 3.5. The combination of features, tweakability, and nice sound make the Creative SBS E2900 an easy recommendation in step-up audio upgrades.