LG made an odd decision with the V60, at least for a modern flagship. While it features a triple camera system, it lacks a separate telephoto shooter. Instead, you’ll find a 64MP f/1.8 main camera with a 0.8-micron pixel sensor and OIS, a 13MP f/1.9 ultra-wide lens (117 degrees) with 1-micron pixels, and a time-of-flight (ToF) sensor. The idea is to simulate a telephoto lens by cropping the 64MP main sensor. While this can work up to a point, it is not ideal, and can't completely make up for the lack of true telephoto shooter. 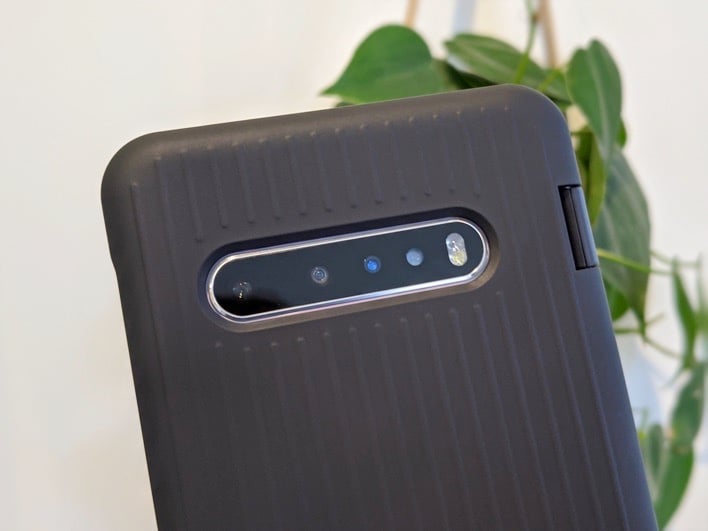 As expected, the main sensor bins groups of four pixels into 1.6-micron super pixels (16MP) for better low-light performance. Still, with a smaller f/1.8 aperture, this setup doesn’t seem like a major improvement over the 12MP f/1.5 main shooter with 1.22-micron pixels in last year’s V50. It’s also worth noting that while Samsung’s Galaxy S20 and S20+ have a separate telephoto lens (1.06x optical zoom), both also rely primarily on cropping from a 64MP sensor for magnification.

But that’s not all. HDR10+ video recording is supported across the board. The V60's main camera can also shoot full 64MP stills and Facebook 3D-like photos (thanks to that ToF sensor). On the audio front, there are now three settings available when capturing video: standard, ASMR, and audio zoom. Previous LG camera modes are also present, like manual video, portrait video, AI time lapse, 360 panorama, and cinemagraph -- to name a few.

The V60 takes nice photos overall, with accurate colors and exposure. Dynamic range is decent in most conditions, and low light performance is good -- at least with the main camera. Strangely, night mode doesn't make a big difference. Our only major gripe is with the simulated telephoto, which only produces decent results up to 2-3x zoom. Beyond that, things degenerate rapidly, and pictures become over-sharpened and noisy, especially at night.

Video recording works as advertised, and sound quality is particularly impressive. Audio has always been one of LG’s strengths, so no surprises there. We think the V60’s camera system will serve most people well and it gets the job done. Unfortunately, it also doesn’t stand out in any way, which is problematic in this competitive flagship segment. The lack of a proper, dedicated telephoto lens is the biggest issue here, relative to the competition, but it is also one of the reasons LG is more aggressive on price.