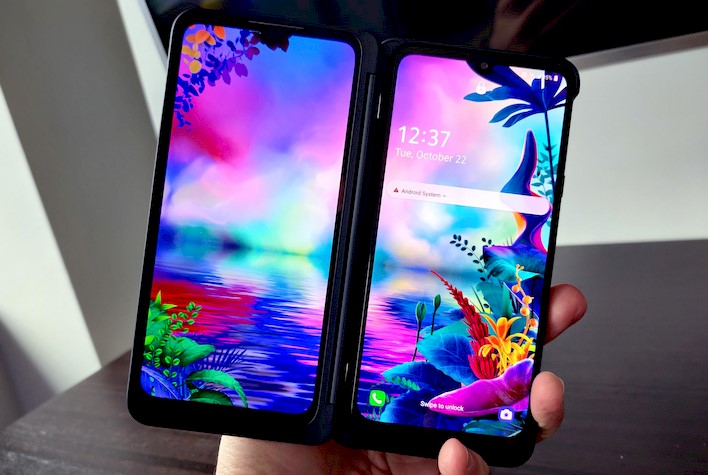 The LG G8X ThinQ was announced a few months back and right from the get-go it was apparent that LG was heading in a somewhat different direction than many of its competitors – at least for the time being. Whereas large format, foldable devices are all the rage as of late, LG took a different approach with the G8X (and it's bigger-brother, the V60 ThinQ) by focusing on optional, dual-screen functionality.

Rather than using a single, large folding screen like the Samsung Galaxy Fold, LG took a more practical approach with the LG G8X ThinQ by pairing it with what the company calls a Dual Screen accessory. The Dual Screen essentially functions like a folio-type case, but instead of merely providing additional protection for the phone’s main display, it more than doubles the screen real estate.

The G8X ThinQ itself has a relatively large 6.4-inch FHD+ OLED panel with a resolution of 2340x1080. The Dual Screen mirrors those specifications, and even includes an additional 2.1-inch monochrome Cover Display on the outside, that’s viewable when the device is folded closed. The case connects to the G8X ThinQ via its USB-C charge and sync port, and features a 360-degree "Freestop Hinge". But before we give away the goose in the intro, we have some hands-on video to show you the device in action and we should probably get some technical specifications out of the way too...


Beyond the trick Dual Screen option, the G8X ThinQ has all the features that you would expect from a high-end Android smartphone, including a Qualcomm Snapdragon 855 SoC, 6GB of RAM, 128GB of internal storage and microSD expansion (up to 2TB). There's an in-display fingerprint reader (a first for an LG smartphone), a dedicated button for the Google Assistant, and support for 4G LTE, 802.11ac Wi-Fi, Bluetooth, and NFC – this is not a 5G smartphone, nor does it offer 802.11ax Wi-Fi 6 connectivity.

On the front of the phone you'll find a single 32MP selfie camera, while the back features a primary 12MP standard shooter and a 13MP wide-angle shooter. And Powering the smartphone is a 4,000 mAh battery, but we’ll dig into more of the particulars a little later. 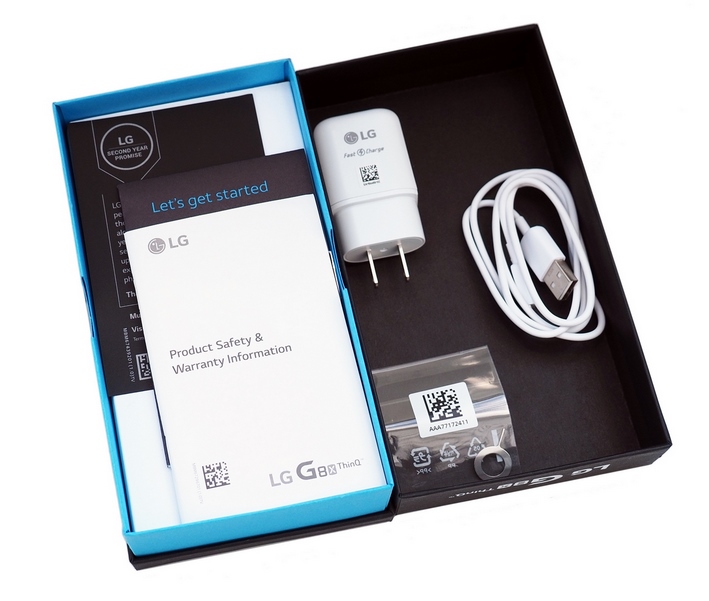 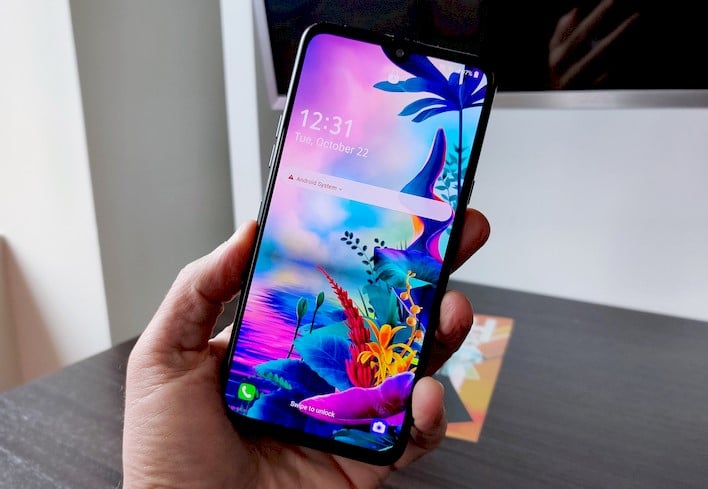 The overall design of the LG G8X is about as clean as they get. The front is essentially all-screen, with relatively thin bezels all around. At the very top, there is a 32MP f/1.9 front facing selfie camera nestled in a small bump-out smack-dab in the center of the screen. The overall dimension of the device measure 2.98 x 0.33 x 6.27 inches, it weighs in at 6.79 ounces, and it has an IP68 rating for dust and water resistance. In terms of its build quality and feel, the LG G8X ThinQ feels solid and in the hand -- the phone is clearly well made. One minor gripe that's only present when not using a case, is that the device is super-smooth and somewhat slick to handle. 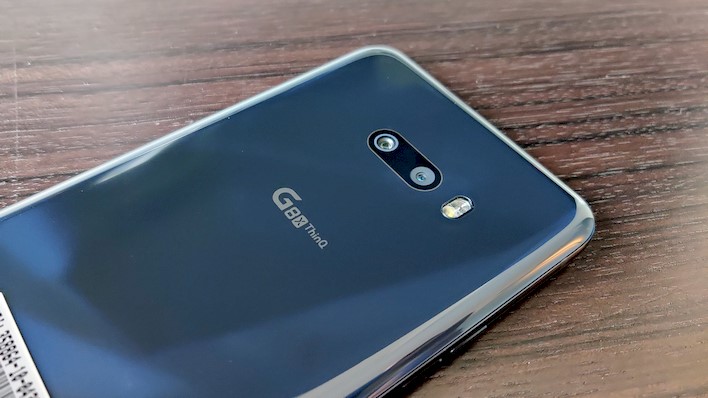 On the back of the phone you’ll find two cameras, a 12M f/1.8 shooter with optical image stabilization and dual-pixel phase detection auto-focus, and a 13MP wide-angle shooter with f/2.4 aperture and 136-degree field of view. To the right of the cameras is the flash and that’s about it. The back of the device is made of a composite material that is very slick an absolute fingerprint magnet. It’s not going to shatter like a glass-backed phone should you drop it, but it’ll definitely get a little funky with daily use, so you’ll probably find yourself cleaning it often, if you don’t keep the phone in a case. 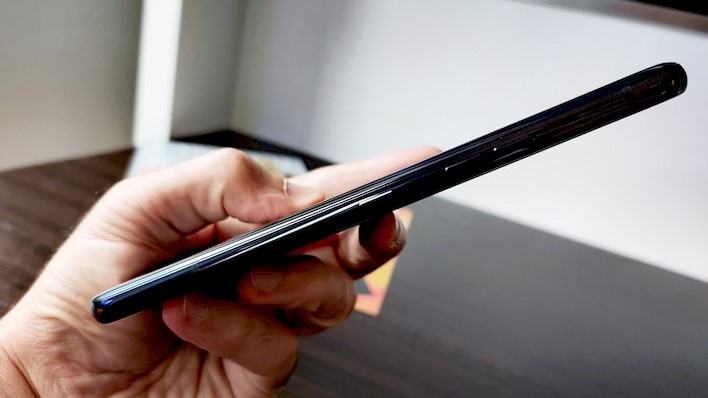 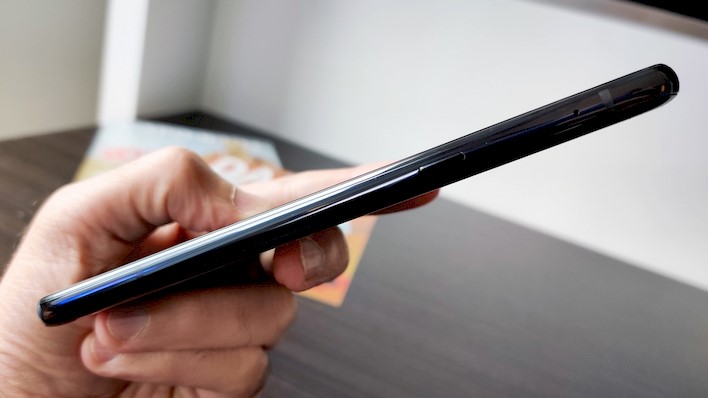 The button and port configuration on the LG G8X ThinQ are pretty standard fare. The left side of the phone is home to the volume rocker and a Google Assistant button, and the right side of the phone has a microphone port and the power / lock button. The combo Sim / microSD tray is along the top edge, and the bottom houses another microphone port, a speaker grille, a standard 3.5mm audio jack, and the USB-C charge and sync port. 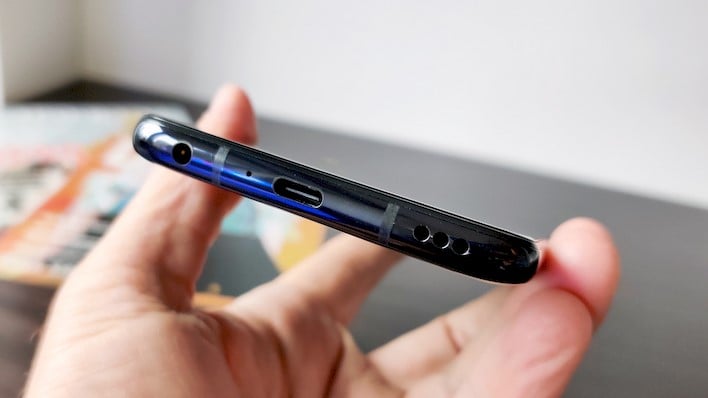 Other than the back of the phone which has a slippery, plastic feel, the LG G8X ThinQ seems impeccably built. The buttons have virtually no play at all and depress with solid tactility and tolerances are super-tight all around. We should mention that in addition to the IP68 rating the phone is also MIL-STD-810 certified, so it makes sense that the tolerances are so tight and everything feels solid and durable. 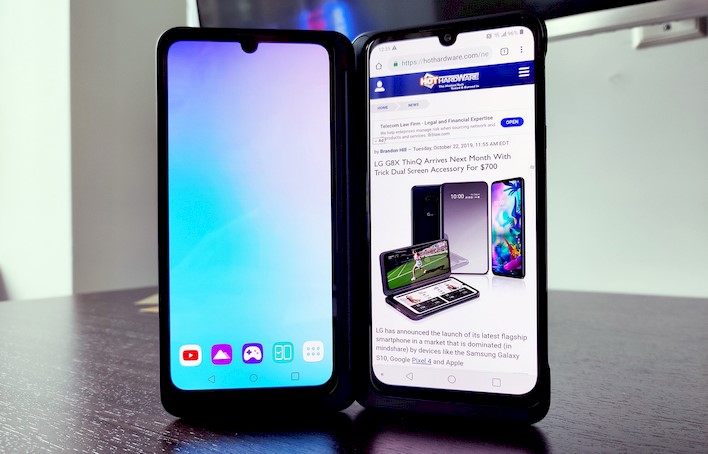 The 6.4” OLED display on the LG G8X ThinQ is top notch too -- or should we say displays? The Dual Screen accessory has an identical panel to the one built-into the phone. They feature a 19.5:9 aspect ratio and 2340 x 1080 resolution, which works out to a 403ppi pixel density. In the real world, the display is bright and sharp, while saturation and color temperature seem spot on. At its max brightness, it is not the brightest display we’ve seen, nor does it have the highest resolution, but the display are definitely a high point on this device.

We should also mention that the audio output on the G8X ThinQ is surprisingly good. Its 32-bit Hi-Fi Quad DAC technology makes audio coming through headphones sounds fantastic, the phone supports DTS:X 3D surround, and the stereo speakers – which uses both the top and bottom firing speaker and a chamber inside the phone to optimize audio quality – results in some surprisingly high volumes that can easily fill a room. Of course, the bass response isn’t strong with such small drivers, which is par for the course with all smartphones, but the audio output from the LG G8X ThinQ will surprise most users that have been stuck with older phones that don’t pay much attention to audio quality.

Google has done an admirable job refining Android over to the years, to the point where clean, unmodified versions of the OS have become preferred by savvy smartphone users. As such, many manufacturers have become less aggressive about modifying and skinning the OS to accommodate unique features or to differentiate their devices. LG seems to have made only minimal tweaks to the stock Android UX on the G8X ThinQ. The things LG have done with its UX 9.0 UI don’t get in the way of navigating or configuring the device much at all.

The default home screens and menus on the LG G8X ThinQ are very straightforward. The main screen has but a handful of icons, a time and weather widget, and the Google search toolbar. Swipe right and a Google news feed slides into view. Swipe left and it’ll bring you to your apps. There’s no traditional app tray on the LG G8X ThinQ; as you install apps, the right home screen starts to fill up and more screens get added as necessary. You do, of course, have the ability to group and arrange apps into folders, however, which behaves just like the app tray on other devices.

LG’s UX on the G8X ThinQ features a flat, unobtrusive color scheme and adds only specific controls for major call-out features like the dual-camera setup, LG's HiFi Quad DAC, and Dual Screen controls, but other than that, its fairly clean and over the last few weeks of use, that phone has been rock-solid stable and a reliable workhorse.
NEXT PAGE