Although the camera setup on the LG G8X ThinQ isn’t bleeding-edge in comparison to some other flagship Android devices, camera performance is quite good in our opinion and the camera app is surprisingly well equipped. You have easy access to multiple shot modes right on the main camera home screen and can access things like Google Lens (AI-assisted image recognition), Portrait mode, and AI Cam, with a single tap. LG also offers an extensive manual shot mode that gives users control over everything from Focus to White Balance, ISO, and just about everything else you’d expect from a smartphone camera. The Graphy feature LG introduced a while back, which is essentially an array of filters derived from settings used by professional photographers, is also available here, as is a feature called story Shot that will easily create composites with images takes from both the rear and selfie cameras.

Google Lens is an assistive tool to aid with things like product price searches, image identification, and information about your surroundings. LG's AI Cam provides shot optimization suggestions based on the subject detected in the shot. In our tests, we found the Auto mode setting in AI Cam did help to optimize lighting and color balance in some shots, though we doubt some of the more artsy or obscure recommendations are going to get used all that much.

We should also mention that the Dual Screen accessory opens up additional possibilities for photo composition. The camera app can be accessed from the second screen, for example, while the main screen is folded over 90-degrees and held up high. Similarly, the second screen can be viewed, while holding the phone down at lower angles to produce more interesting compositions. 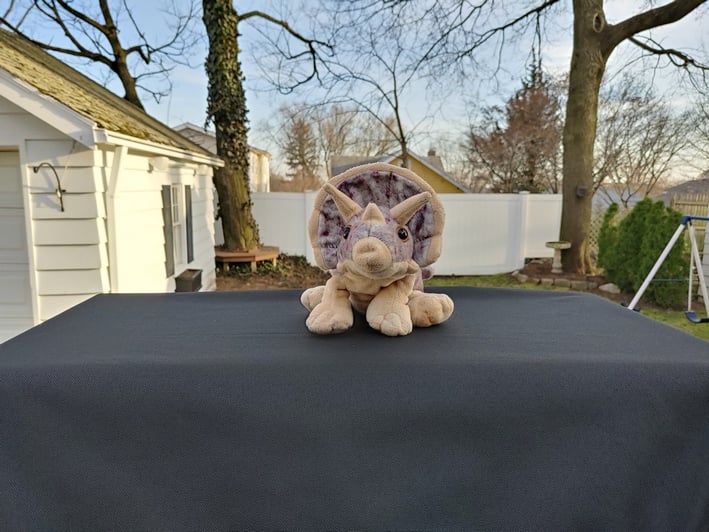 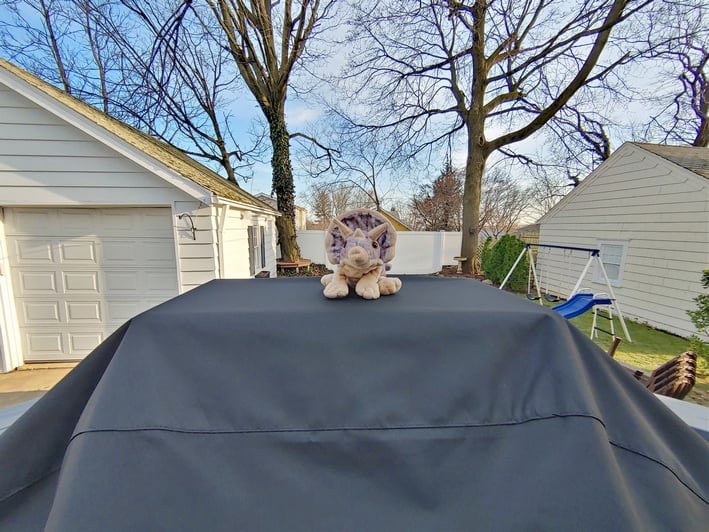 
In practice, the output from the LG G8X ThinQ’s cameras is quite good in our opinion. In these first few of shots above, we show you how the rear-facing standard and wide-angle cameras behave. We captured those shots without moving at all. We simply snapped the first shot on the standard cam, tapped the wide-angle option and snapped the second shot. As you can see, the standard and wide-angle shots offer a significantly different field of view. There is a bit of distortion at the far edges of the wide-angle shot, but that is common to all wide-angle lenses. 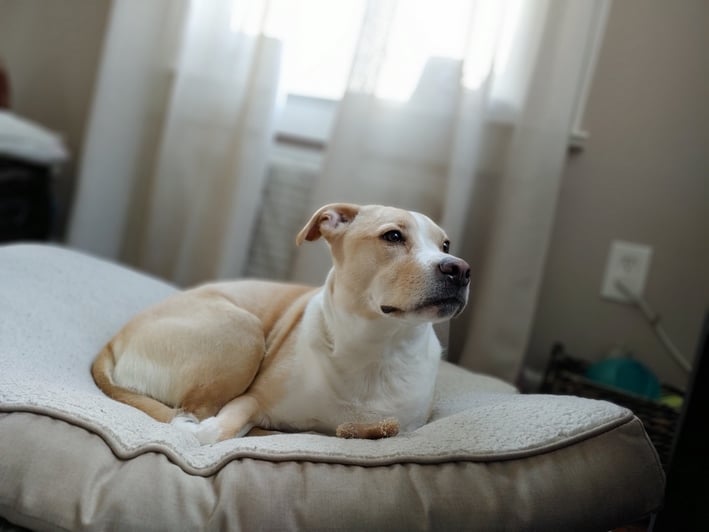 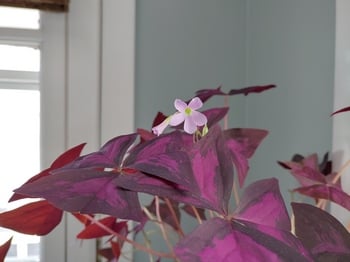 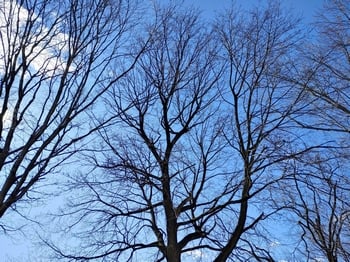 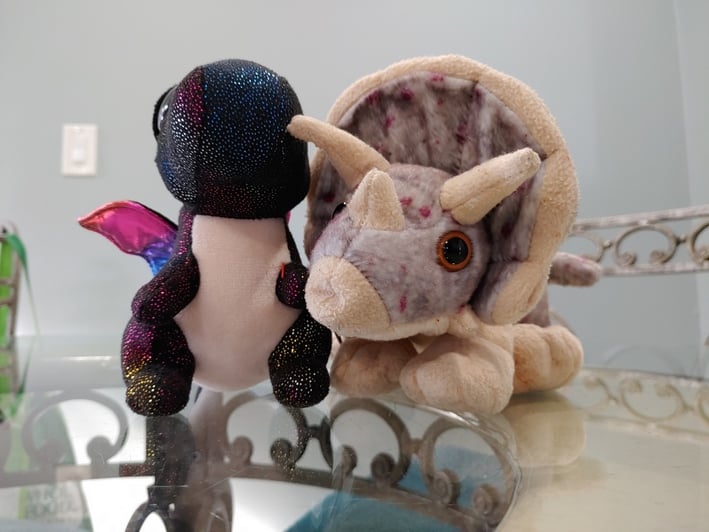 
In terms of overall quality, pictures captured with the LG G8X ThinQ look very good. Color accuracy is good, and white balance and sharpness are particularly strong. If anything, images are somewhat muted and could use a bit more vibrance and saturation, but we really can’t complain. The camera setup does a good job capturing subtle details in various lighting conditions and there is minimal noise, even in darker areas. For quickly snapping shots in auto mode for sharing on social media, we doubt anyone would complain. 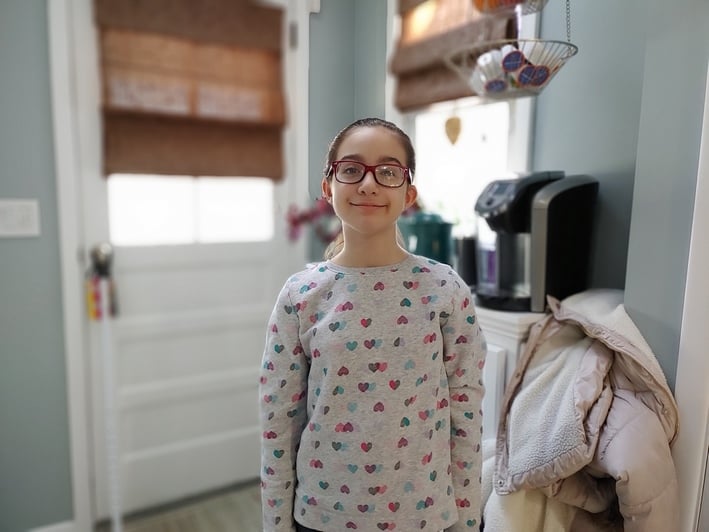 
Portrait mode also works fairly well on the G8X ThinQ, but as is the case with most phones that lack a dedicated depth sensor, the software-assisted bokeh effects are not perfect. In the shot here, you’ll notice the phone did an admirable job isolating the subject, even though there isn't a ton of contrast with the background, but there's some unwanted blur on the upper-right portion of her head and some of the K-Cups in the upper-right corner are sharper than they should be. Same for the crumpled up jackets on the right.

That said, we still really like the camera output from the LG G8X ThinQ, for both stills and video. If a high-quality camera setup is high on your list of smartphone must-haves, the LG G8X ThinQ may not be on the bleeding-edge, but it won’t disappoint. And even if you’re not digging its auto-mode captures, extensive controls are available to tweak images to your heart’s content in manual mode anyway.

Our first set of tests will focus on web and productivity tests. Browserbench's JetStream and Basemark's Web 3.0 tests use JavaScript and WebAssembly to work through a series of computational and real-world scenarios to see how the LG G8X performs. We should note that we updated to the latest version of Chrome mobile prior to testing all of the phones featured here... 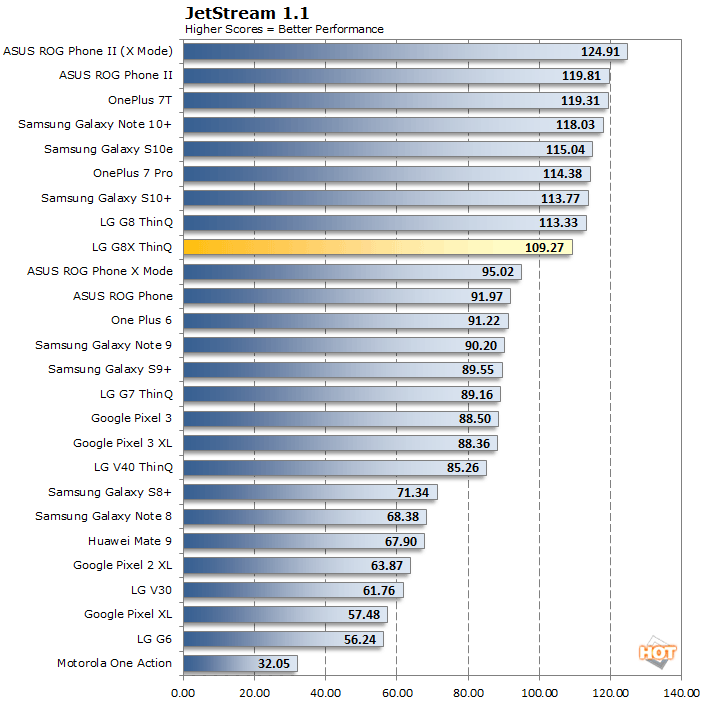 The LG G8X ThinQ ends up trailing the older G8 by a small margin here, but ultimately is in the same league with the other Snapdragon 855-powered phones. The One Plus 7T and ASUS' ROG Phone II are clearly the fastest of the 855-powered devices, though. 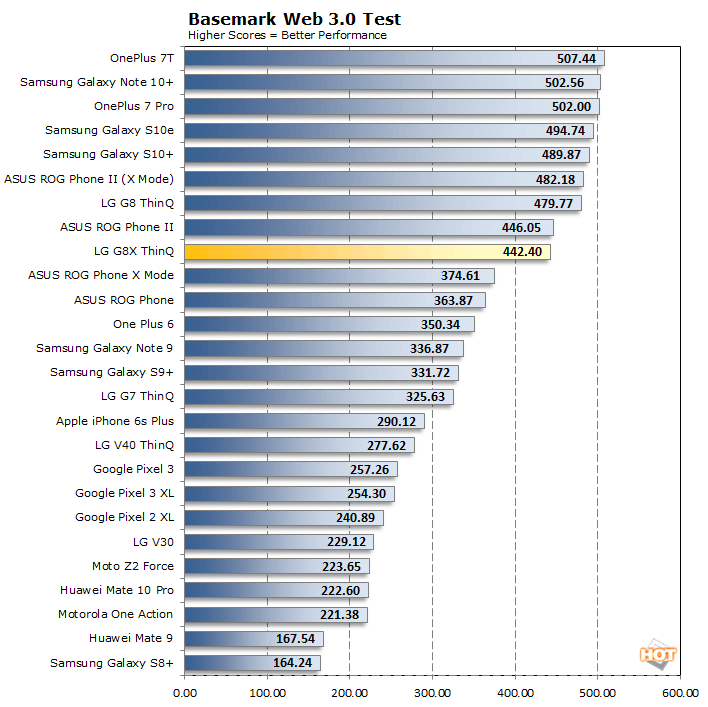 The LG G8X ThinQ hangs with the ASUS ROG Phone II in the Basemark Web 3.0 test, but once again trails its predecessor and some of the premium Samsung devices in the reference group.


The latest version of Geekbench has aligned its scores with Geekbench 5 on the desktop side, so as a result we had to capture all new results for this review. We've still got a pretty big cross-section of devices represented, though, so let's see how the Motorola One Action fares. 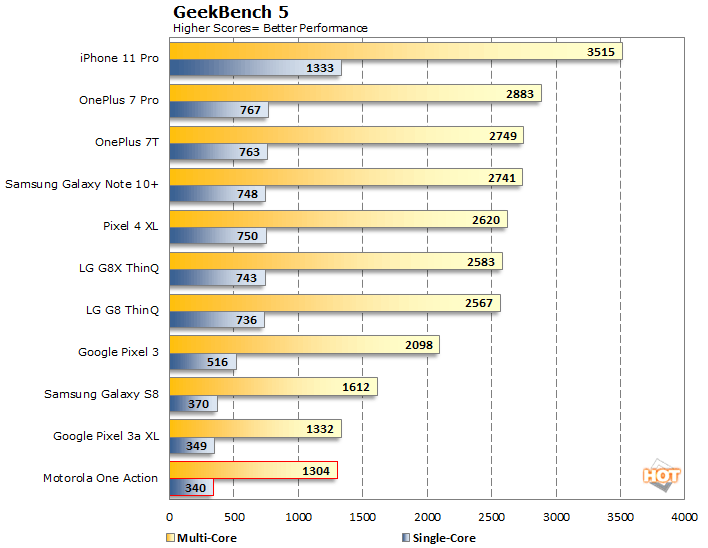 In the Geekbench 5 tests, the LG G8X ThinQ is able to overtake its predecessor by a small margin and finishes just behind the Google Pixel 4 XL. The Samsung and OnePlus devices, which use the same Qualcomm SoC, still maintain a small performance advantage here, however. 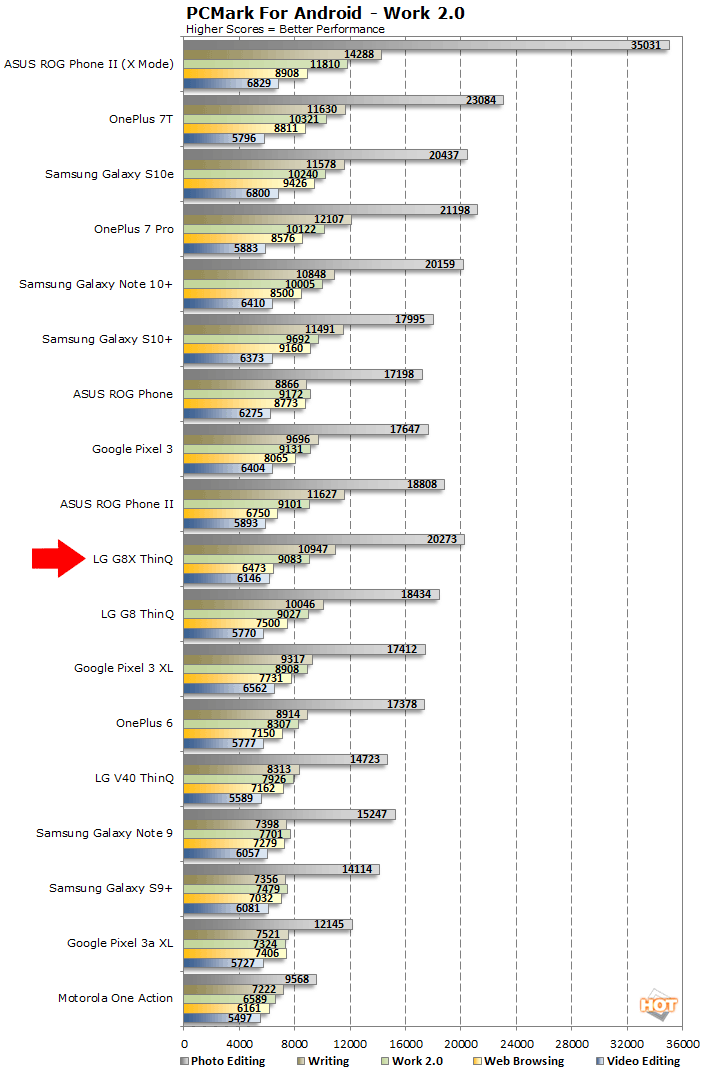 In the PCMark10 benchmarks, the LG G8X ThinQ is once again able to overtake its predecessor, but only by the smallest of margins.


Next up we'll focus on 3D performance using GFXBench and UL's 3DMark Sling Shot benchmarks. Since modern Android phones come with displays of all shapes and sizes, we level the playing field by looking at off-screen rendering performance. While that doesn't draw full-sized images to the screen and makes the benchmarks a little less fun to watch in the process, this does ensure that every phone gets the exact same task. These tests are a bit more challenging than most 3D games on Google Play, since most developers want their games to be playable for the vast majority of phones.


GFXBench has several scenes built in. The most well-known batteries are the T-Rex test and Manhattan. These are good choices for our lower-end phone, since it doesn't have big, beefy graphics built in. 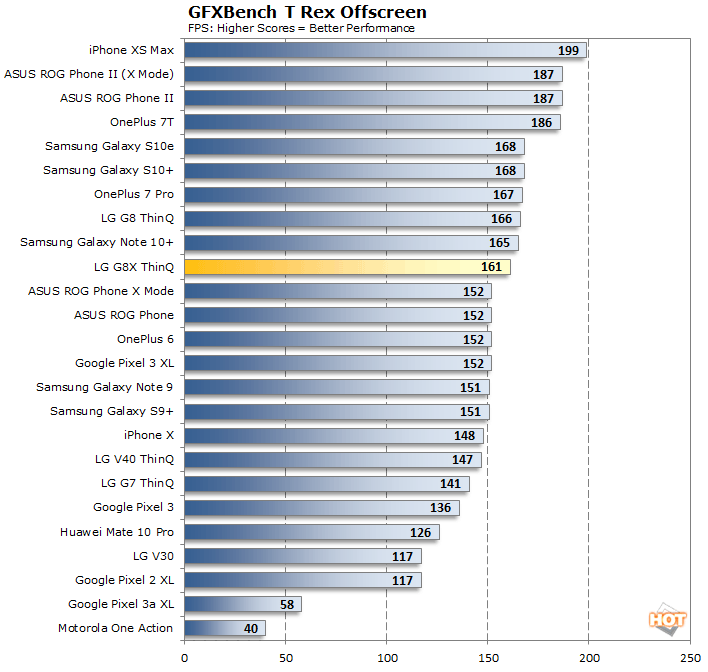 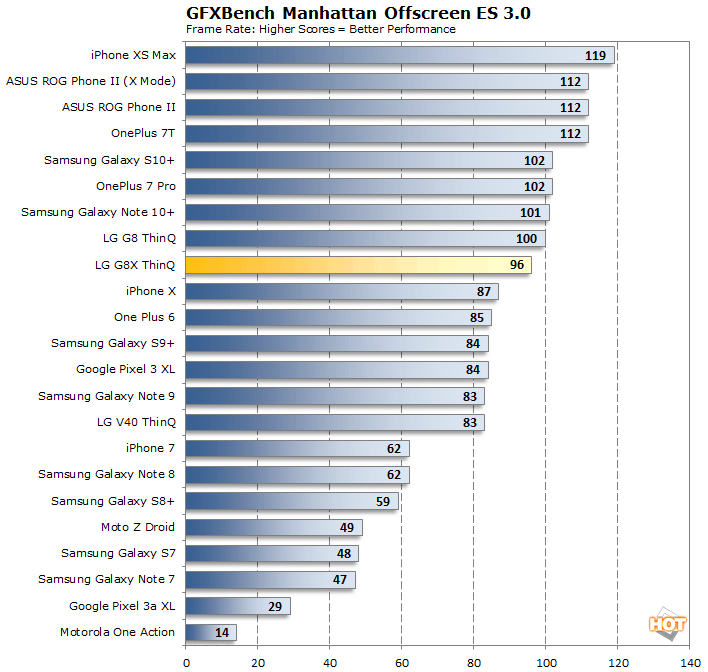 The LG G8X ThinQ ends up finishing just a notch behind the G8 here. The differences are minimal, however, and can likely be chalked up to differences in software / drivers on the phones, since their internal specifications are essentially identical. Let's see if 3DMark fares any better. 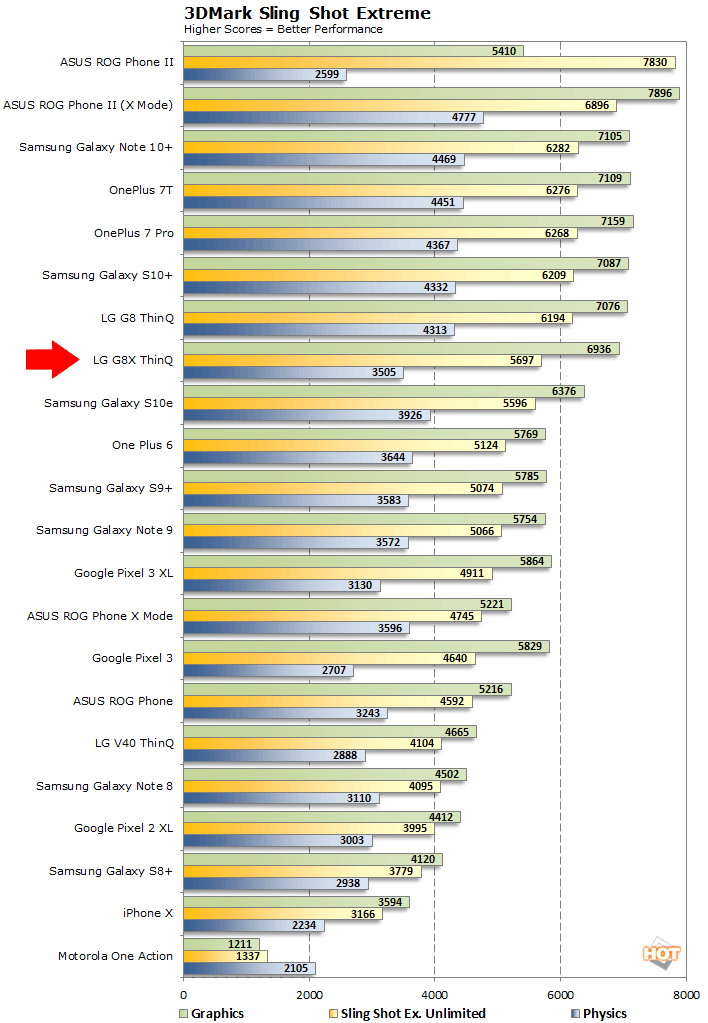 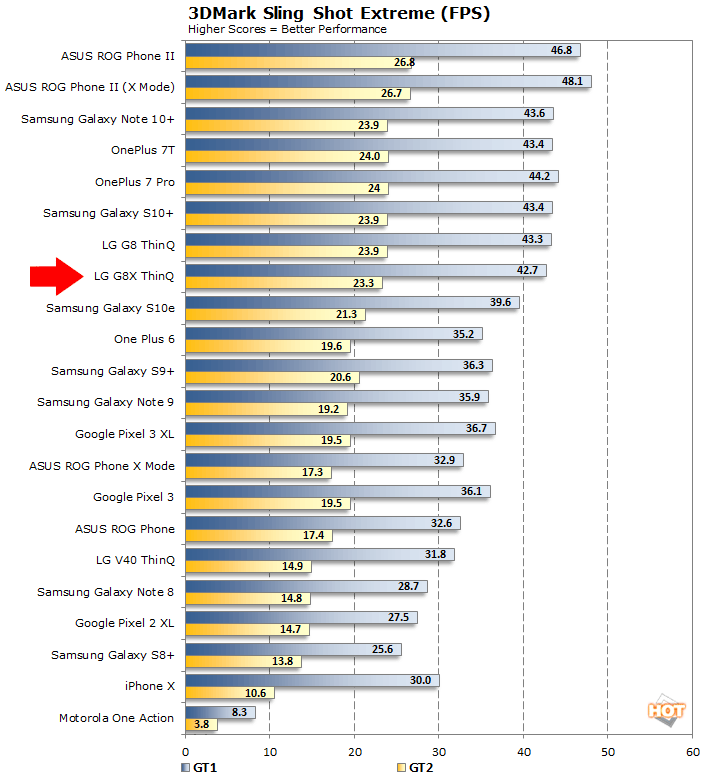 The overall results in 3DMark tell essentially the same story -- the LG G8X ThinQ finishes on-par with, though technically a notch behind the LG G8, and a few percentage points behind devices like the Samsung Galaxy Note 10+ and OnePlus 7T.
PREV PAGE NEXT PAGE