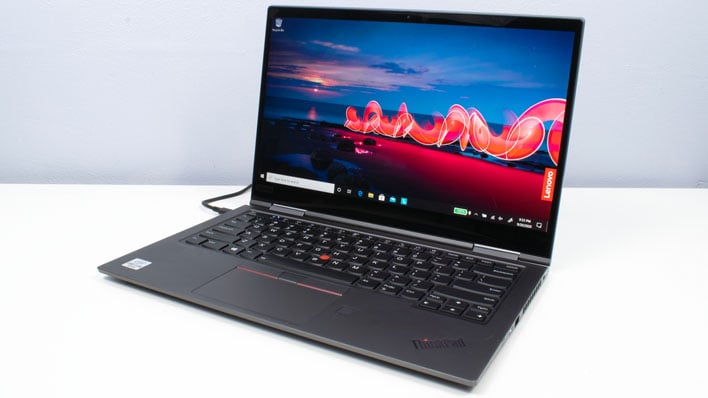 The Core i7-10610U in the ThinkPad X1 Yoga has four Comet Lake cores, which trace their lineage to 2015's Skylake CPU architecture. As a result, we figure this CPU should score right on par with 8th generation Core i7-8665U, which does not perform as well as other 10th-generation CPUs like the Ice Lake-based Core i7-1065G7. Still, it should be more than fast enough for typical web and office productivity tests. Saying that isn't really good enough, though; we need to prove it out in a battery of tests. That's up next. 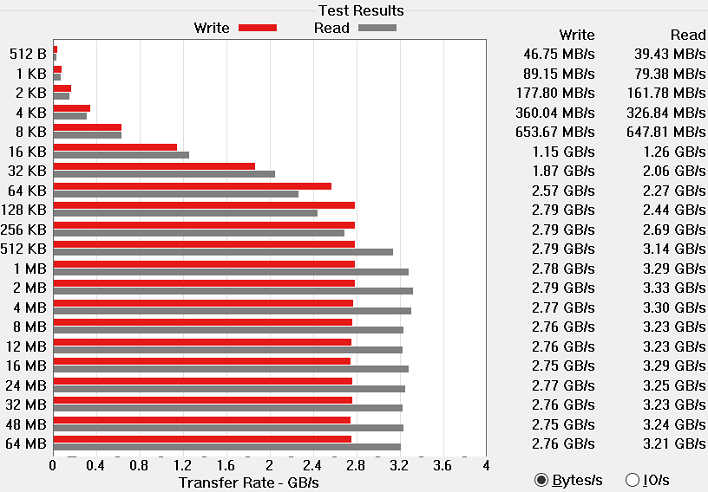 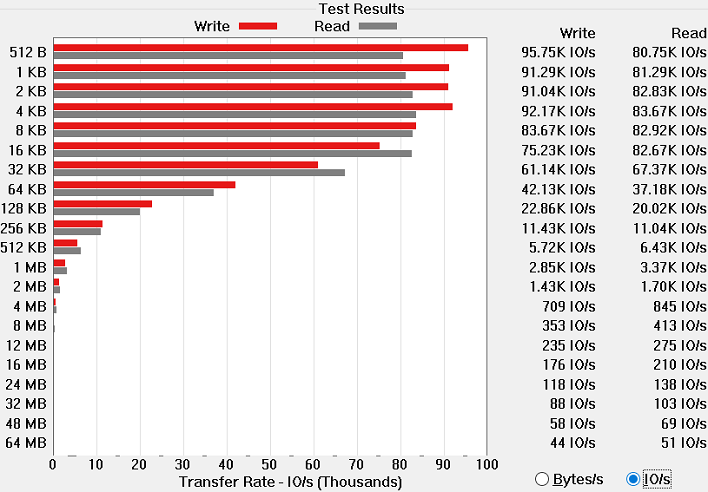 The drive in the ThinkPad X1 Yoga is a pretty common and really fast Samsung PM981a drive. That's an OEM-only drive that seems to track its performance alongside the likes of the company's 970 EVO series. Read and write performance is outstanding, besting 3 GB per second on sequential reads and 2.75 GB per second on sequential writes. IOPS performance is pretty solid for this test, which emphasizes a queue depth of 1 at various sizes. The raw IOPS drops as sizes increase, since each operation has more data to read or write. 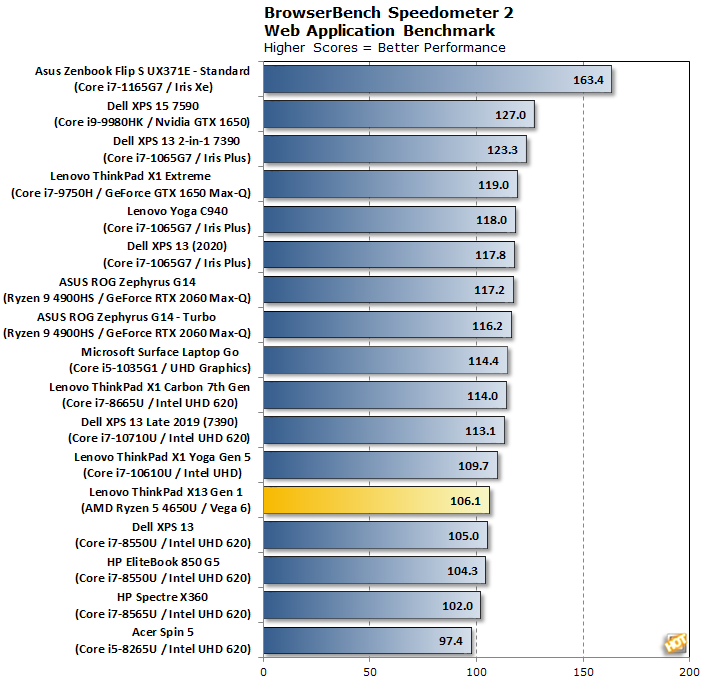 The Core i7-10610U in the ThinkPad X1 Yoga performs on par with the older Core i7-8665U. Both are based on the Intel's 14-nanometer fabrication process and even share a common ancestry all the way back to 2015's Skylake architecture. As a result, the ThinkPad X1 Yoga can only hope to beat its 8th gen-based predecessors. Meanwhile, the system looks wistfully up at the Core i7-1065G7 found in many present-day models like the Dell XPS 13. Meanwhile, Intel's Tiger Lake reference platform rewrote the book on lightly-threaded performance in this benchmark. 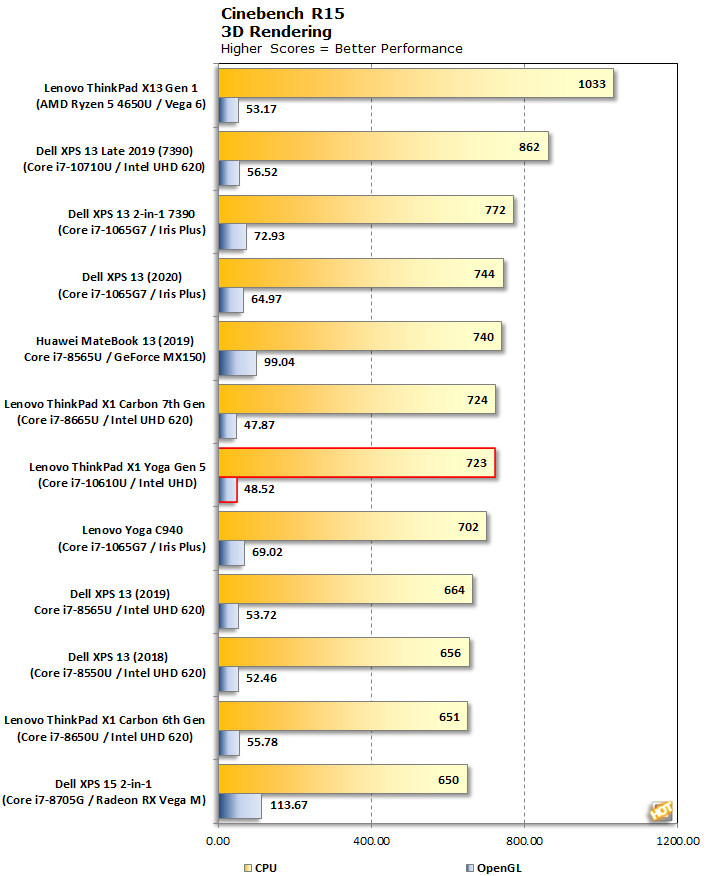 As expected based on the CPU's specifications, the ThinkPad X1 Yoga performs in the middle of the pack. It's right in line with the other systems with similar CPUs while trailing the 10-nm CPUs and of course AMD's Ryzen 5 PRO 4650 in the ThinkPad X13. There just aren't enough cores to take on AMD, but that's not really what this notebook is designed to do. Most users who rely on rendering applications of any stripe will likely want a beefier system with a bigger cooler and potentially a discrete GPU. The Yoga performed well, given the task at hand. OpenGL performance is also right about where we expected it. 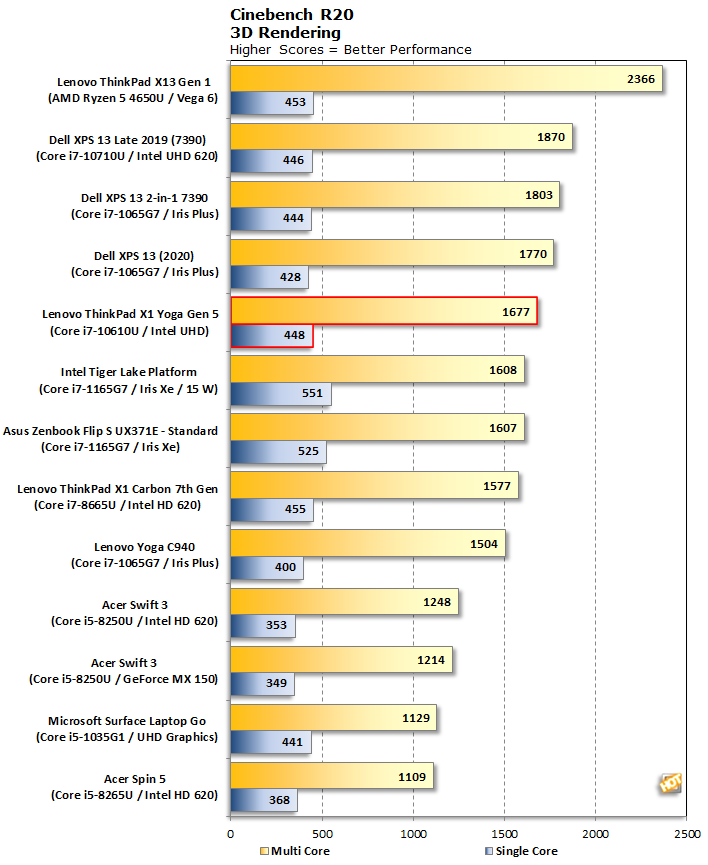 Interestingly, the ThinkPad X1 Yoga tied up with the Tiger Lake reference platform. This test takes longer to complete and stresses the cooling system a bit, so that's actually quite good news for the Lenovo. That Intel machine was built to handle different PL configurations up to 28 W, and the low-power 15 W Core i7 here kept up. Even the hexacore late 2019 XPS 13 with the Core i7-10710U only just barely wins. 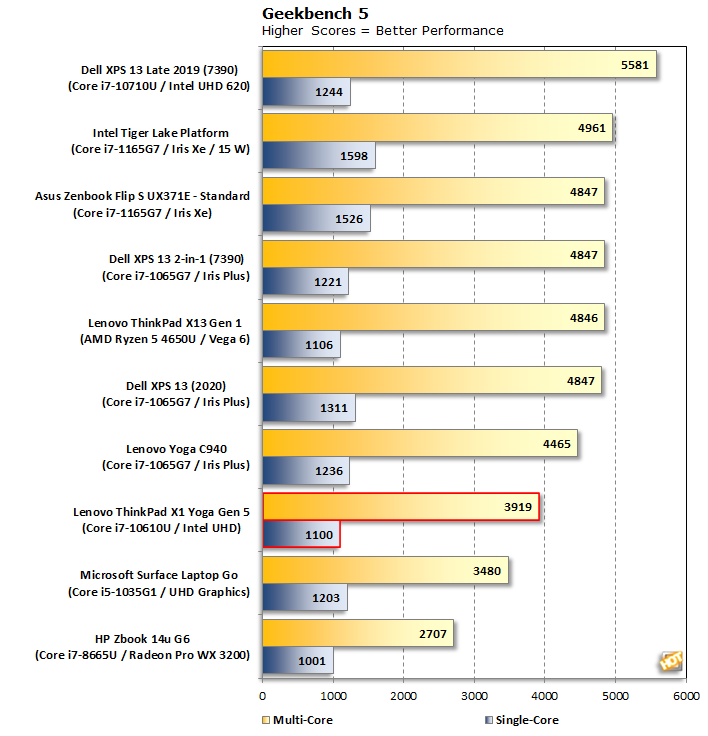 Since we got a later start on Geekbench 5, we don't have as many notebooks in our test, and only a single 14-nanometer Core i7. As a result, the ThinkPad is towards the bottom of the list. The good news is that it outran the HP Zbook 14u G6 by a huge margin on the multi-threaded test. It's a bit behind the CPUs with newer architectures, though. 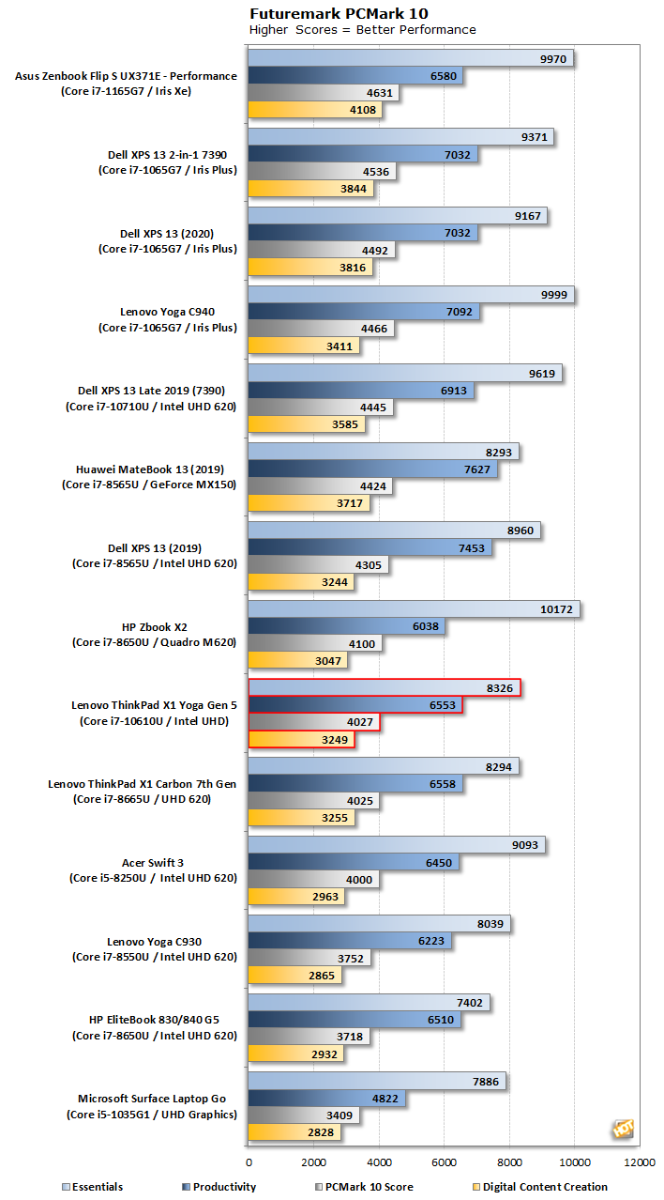 PCMark 10 most closely resembles the type of use case for a system like the ThinkPad X1 Yoga. These are business laptops mean to do office productivity tasks. Unfortunately, the Yoga trails a good number of its contemporaries, including Lenovo's own Yoga C940 14 2-in-1, and essentially ties systems based on the previous-gen Core i7-8665U. Digital Content Creation is hurt by the older UHD Graphics integrated GPU, while the Essentials and Productivity tests suffer due to other systems having better lightly-threaded performance. We'd have really liked to see a Core i7-1065G7 in this system. 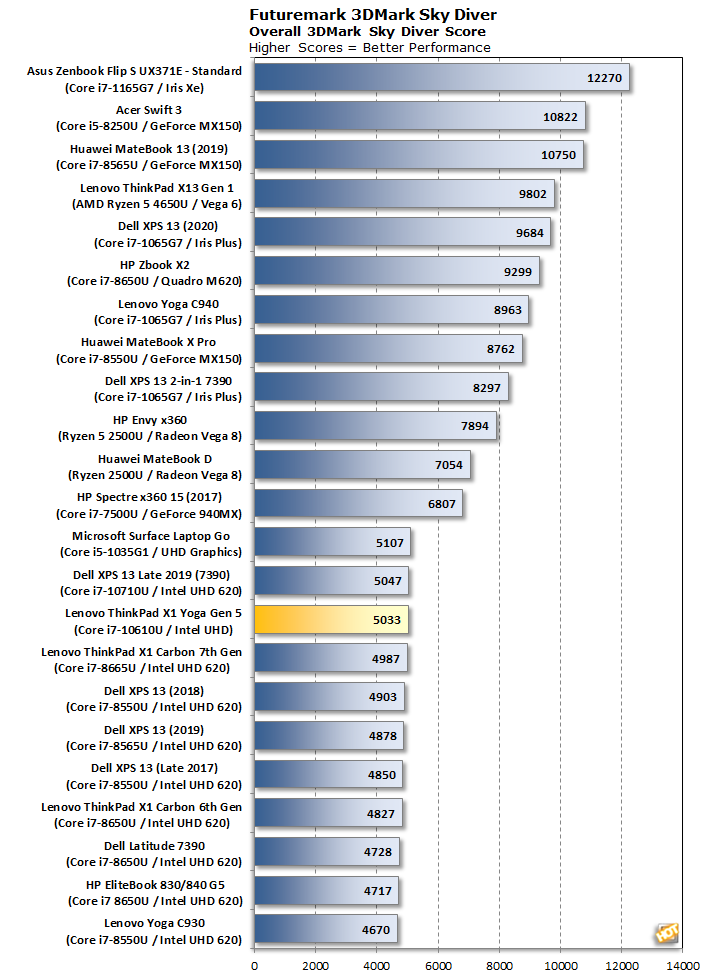 The Intel UHD graphics processor will hold this system back in every 3D test we perform. Intel didn't give it a model number, instead opting to call it "UHD Graphics for 10th Generation", but the integrated GPU here places it roughly in the ballpark of UHD 620 in the Core i7-8665U and similar. AMD's integrated GPU and Intel's own Iris Plus graphics are miles faster than the UHD on display here. 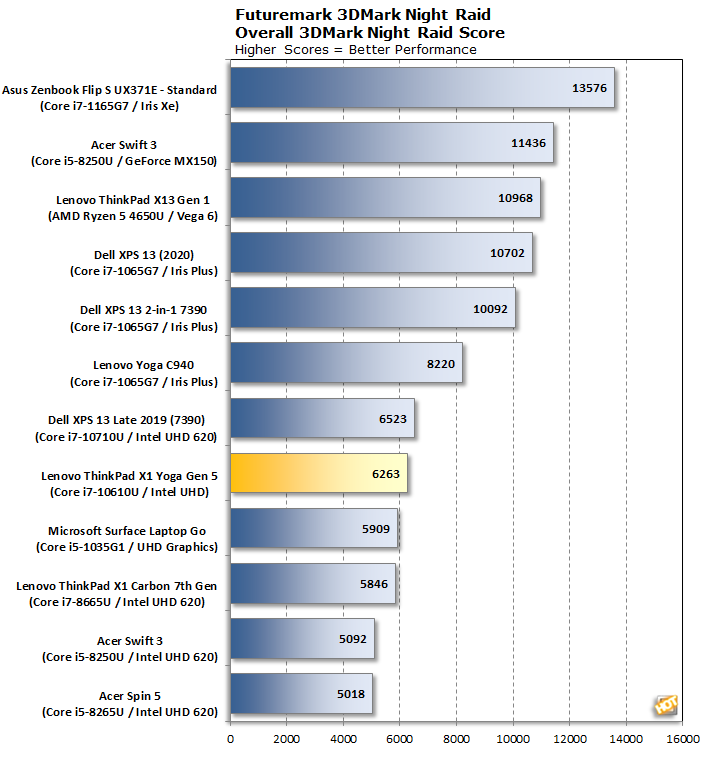 The Yoga also struggled a bit on Night Raid, but there's more separation here. This notebook is a hair faster than all of the 8th generation systems, but it trails the six-core XPS 13. The laptops with Iris Plus graphics are nearly a full 1/3 faster than this one. And then just like before, the Iris Plus systems are so much faster that they might as well be running a harder test. 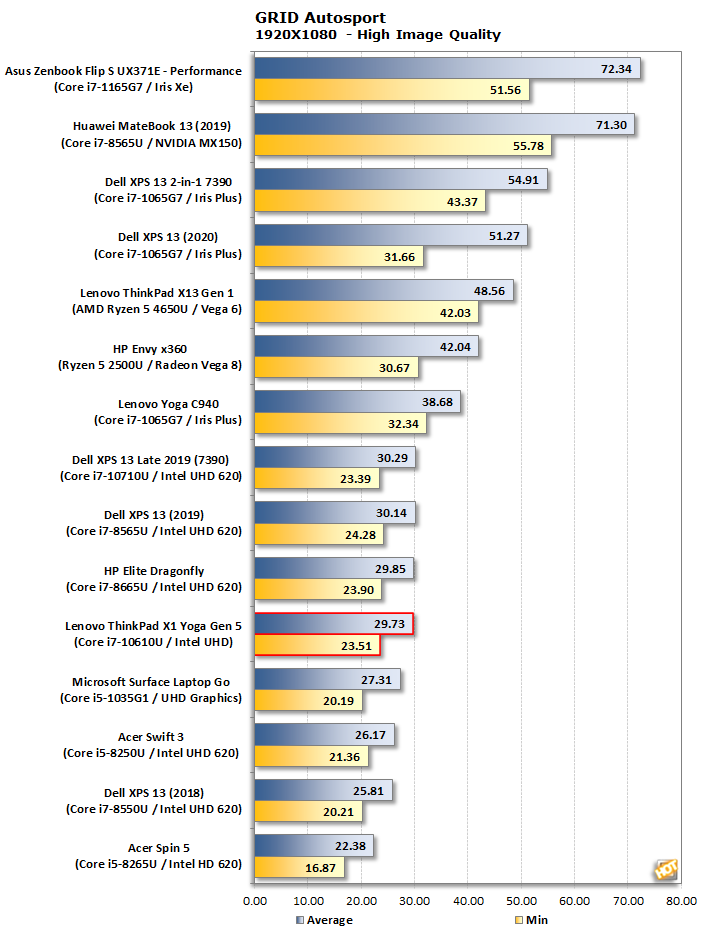 Just like with 3DMark, the UHD graphics performance isn't great. It's in the same ballpark as other UHD systems, but it's barely fast enough to play at our chosen 1080p High settings. Radeon integrated graphics and Iris Plus are pushing 50% more frames per second on average, and the minimum fps difference is even wider. Dial the settings back and you could play a few games on the road, though. We're not expecting gaming PC graphics performance here, but there are better integrated solutions on the market. 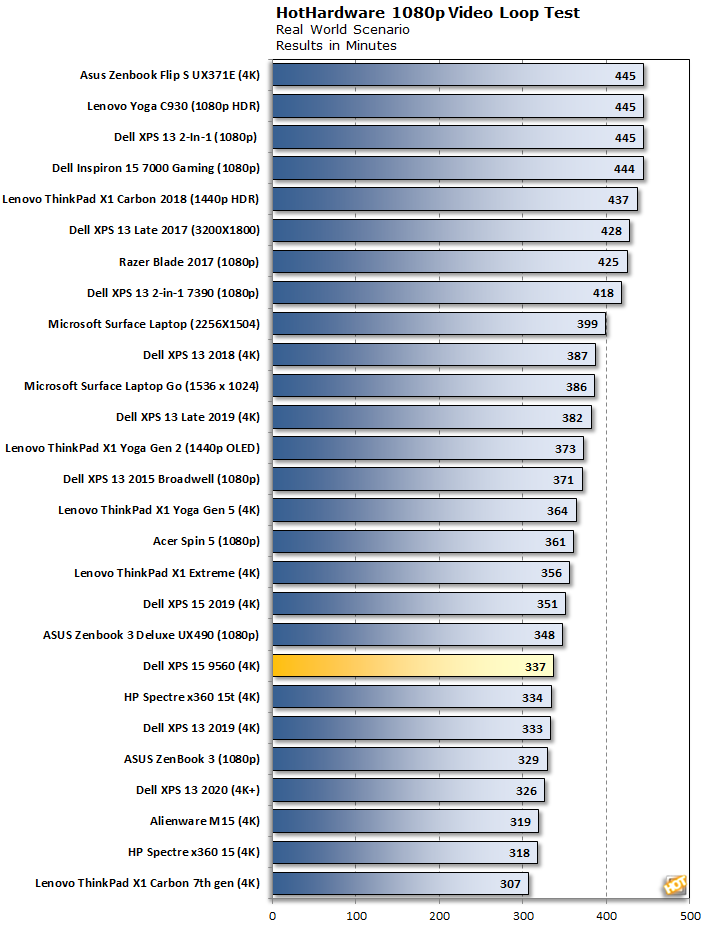 Measuring battery life has so many variables, but the most consistent one of them all is the screen resolution. High-density 4K panels just don't last as long as their 1080p siblings. That's true here, as the ThinkPad X1 Yoga gave out in just over six hours. That's towards the high end for 4K, but many others last much longer. The lesson here is that if you want the best battery life, you might be better off opting for a lower resolution screen. 1080p is still pretty sharp, although 4K is next-level crisp. As always it's a trade-off, and buyers should just make the decision based on what's most important to them.

Next up we'll take a look under the ThinkPad X1 Yoga's hood and check out cooling performance before we wrap it up with our final thoughts.