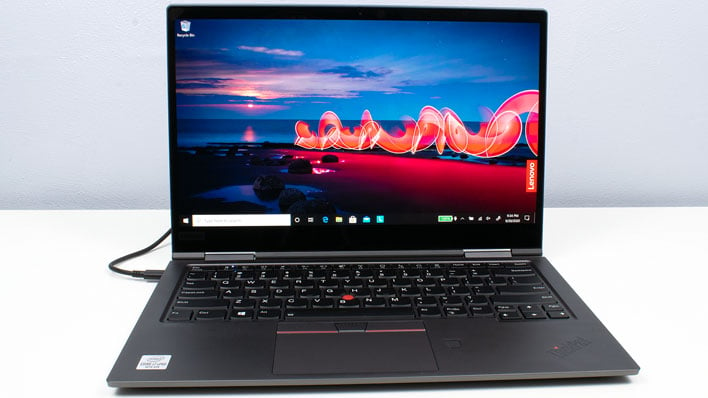 Lenovo's ThinkPad X1 series, the company's flagship notebook lineup, is no stranger to our offices. The various iterations of the ThinkPad X1 Carbon are some of our favorite ultra-light notebooks. In recent years, Lenovo has pushed the X1 family into 2-in-1 convertible devices as well, and we've very much liked these types of systems in the past as well. Today, the ThinkPad X1 Yoga Gen 5 has returned to us, with a 360-degree hinge and a punchy 14-inch 4K display.

The updated ThinkPad X1 Yoga arrived with an Intel 10th-generation Core processor. However, Intel's product naming recently has been somewhat confusing, to say the least. 10th Gen Core i7 processors come in two flavors: the 10-nanometer Ice Lake CPUs with Sunnycove cores and impressive Iris Plus graphics, or the Comet Lake CPUs with the older Skylake architecture and UHD graphics. This Yoga has the latter, but a notebook experience is more than what it has on the inside, so let's not make too many judgments just yet. First up, let's meet the ThinkPad X1 Yoga Gen 5... 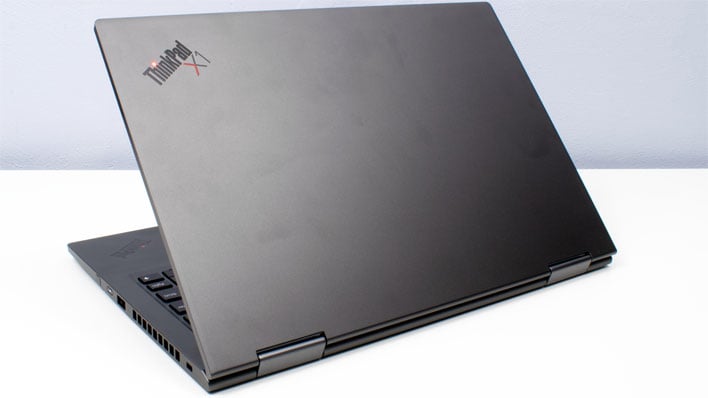 Intel's 10th Generation Comet Lake-based processors power the ThinkPad X1 Yoga. Options start with the quad-core Core i5-10210U and work their way up to our review unit's Core i7-10610U. Unlike the six-core i7-10710U above it, this processor has four cores and eight hardware threads with Hyper Threading. Intel's vPro technology is available on specific models or as a custom-build option, so IT folks who manage systems remotely have all the tools they need in the system.

The clock speeds try to make up the difference for the older architecture, with a 1.8 GHz base clock and a maximum single-core Turbo Boost of 4.9 GHz. That means while the Yoga is saddled with an older CPU architecture, lightly-threaded workloads should still be quite snappy. Tiger Lake models are likely right around the corner, though, and in case you missed it, the 11th Generation Core family looks like it's going to rewrite the book on single-threaded performance.

Memory options include 8 or 16 GB of LPDDR3 memory running at 2,133 GT/second. The RAM is soldered to the motherboard, something that's very common in this class of notebook, so buyers should be sure to spec out the system with as much memory as they think they'll need down the road. Primary storage is user-upgradeable, however, in the form of an M.2 2280 NVMe SSD. Options range from 256 GB to 1 TB of primary storage. 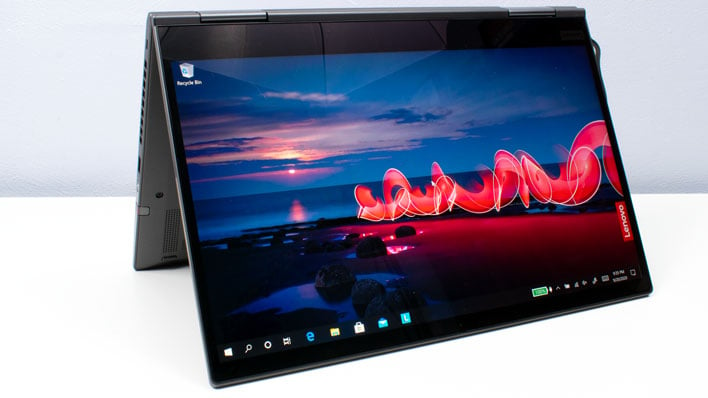 As we've come to expect from Lenovo's ThinkPad lineup, networking options are numerous. To start with, all ThinkPad X1 Yoga systems come with an Intel 802.11ax Wi-Fi card that handles Bluetooth 5.0 duties as well. For those who are on the road and away from Wi-Fi for long stretches of time, there's an optional 4G LTE wireless WAN card option available as well, and Lenovo even makes a data plan available as an upgrade.

While some of the internals may not be the freshest fruit from Intel's orchard, the ThinkPad X1 Yoga has a really great looking external aesthetic with its sharp lines and Iron Gray finish. Thanks to an aluminum and magnesium enclosure, the system is pretty lightweight for a 14" notebook, squeaking in just under three pounds. That light weight is handy when folded back on its 360 degree hinge into tablet mode. Our arms never got tired cradling it while browsing the net or binging The Office on Netflix.

Unlike the ThinkPad X1 Carbon, which has a partially carbon fiber body (as its name indicates), the ThinkPad X1 Yoga's lid and palmrest are entirely made of metal. The display panel and its bezels sit under a sheet of glass. The only plastic we found on the body is the bottom of the unit. That was likely done to keep the weight down a bit and provide some scratch resistance. Even the polycarbonate on the undercarriage has a premium feel to it though, with a soft touch texture that wards off fingerprints. 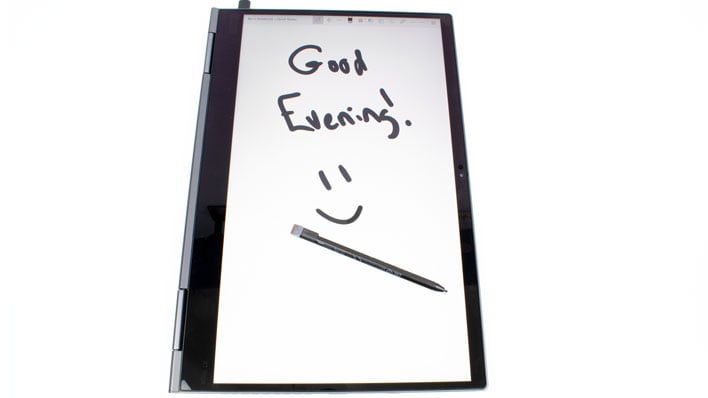 The display on the Yoga is gorgeous. Our review unit has the optional 3840x2160 (4K UHD) display with Dolby Vision HDR certification and HDR 400 support. While it lacks local dimming and the backlight won't burn its images into our retinas, this touch-enabled IPS display still gets the job done in non-HDR tasks with a maximum 500 nit brightness. Indoors, even in sunny rooms, were no challenge for the backlight, and even outdoors in shaded areas we had plenty of visibility. Direct sunlight is just about the only environment where a 500-nit display doesn't cut it very well.

The display has Windows Ink support baked in, and the system also comes standard with an active stylus that resides in a dedicated garage in the side of the Yoga. It's a comfortable, thin stylus about the thickness of a Number 2 pencil and the length of a typical ballpoint pen. Having a permanent residence inside the notebook means it shouldn't get lost easily. The stylus has 4,096 levels of pressure sensitivity, so it's very suitable for note takers and artists alike. Bezels are pretty thin around the left, right, and top of the display, but there's a nice sized bezel suitable for holding the unit on the hinge side. 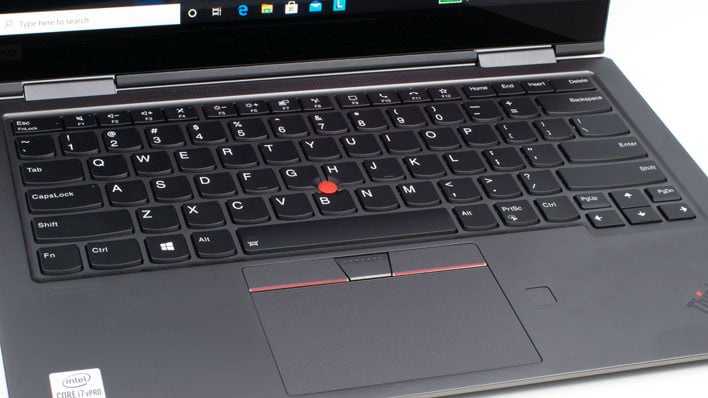 The Yoga's Inputs and Outputs

In notebook orientation, the ThinkPad X1 Yoga has Lenovo's trademark excellent keyboard, track pad, and Track Point nubbin. Lenovo didn't mess with a good thing, as the keyboard has plenty of travel and feels light and responsive. As is customary, this review was typed in its entirely with this keyboard, so we gave it ample testing. Above the keyboard sits a passive vent that draws in additional air, not a speaker grille as we first thought.

The Track Point mouse pointer isn't for everybody, but we find it to be convenient to use without moving our hands from the keyboard, and out of all the manufacturers who implement similar tech, we think it's got the best sensitivity curve. The track pad isn't overly big, but it's sufficient and supports Windows gestures. Having both the Track Point and track pad option is typical on ThinkPad systems, and having plenty of options is something we appreciate. 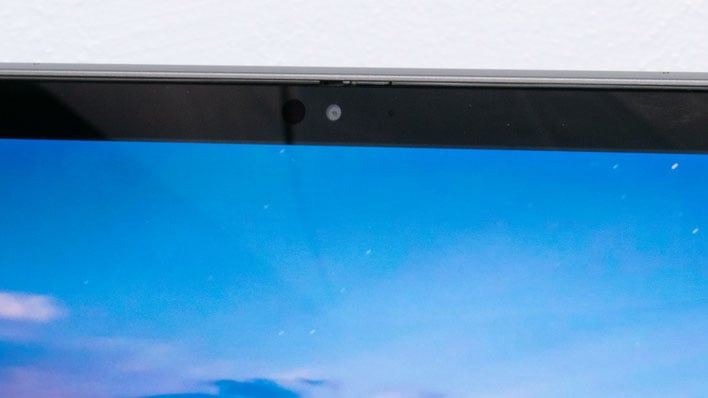 Biometric authentication fans have two options on the ThinkPad X1 Yoga. An integrated fingerprint scanner is standard on all models, and sits in a small square next to the track pad. It recognized our fingers quickly via Windows Hello and had very few false negatives as we'd log out and back in. The 720p webcam also has an infrared option for facial recognition. Our review unit had the upgrade, and also recognized us without much issue. It's not very sensitive to room lighting, and dimly lit rooms did not pose a problem.

The webcam itself is very similar to what we find on other business laptops. It's great for Skype calls and Zoom meetings, and good lighting is important to a high-quality image. There's also a noise-canceling microphone array and Dolby-certified speaker system to handle audio duties. The microphone worked great for online meetings, as our callers could hear just fine. The speakers put out a good amount of volume and have plenty of high-end clarity, but not a lot of bass. That's to be expected in small laptop speakers, though. 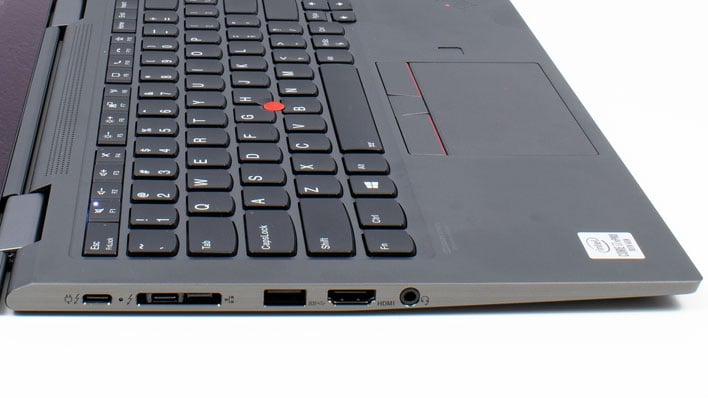 On its left side, the ThinkPad X1 Yoga Gen 5 has a pair of Thunderbolt 3 ports in the usual USB Type-C form factor, both of which handle USB 3.2 Gen 2 and DisplayPort alternate mode on top of the PCI Express connectivity inherent to the Thunderbolt spec. One of those ports is paired with Lenovo's proprietary docking port, which can provide wired Gigabit Ethernet and a single-plug connection to power and displays. There's one USB 3.2 Gen 1 Type-A connector, an HDMI 2.0 port, and a combination headset jack for 1/8" headsets.

Around the right side we can find one more Type-A port and a Kensington-style lock port. This is also where we find the power button with its white LED power indicator and the garage for the system's included stylus. Due to its 2-in-1 nature and 360-degree hinge, there is no room for additional ports around the rear.

Lenovo backs the ThinkPad X1 Yoga Gen 5 with a one-year carry-in or depot warranty. Additional coverage may be added to the system at the time of purchase. Pricing starts at $1,350, and our review unit rings in at an even $2,100. 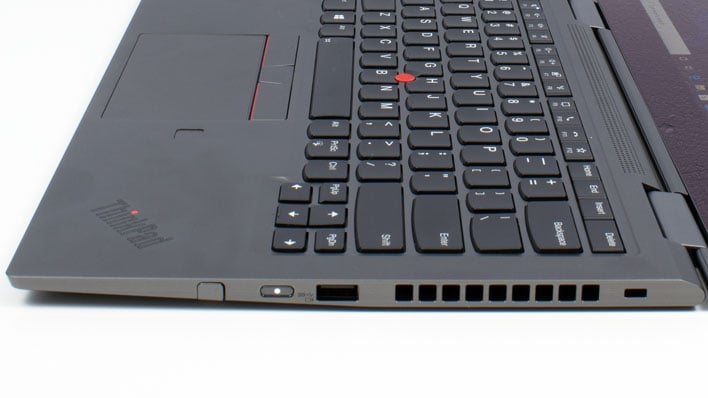 The software experience on the ThinkPad X1 Yoga is very lightweight. Lenovo offers the system with Windows 10 Pro and Home. Our review unit came with Windows 10 Pro's 1909 (Fall 2019) update installed, and as of the review time, 2004 was not appearing in Windows Update. The only applications that were preinstalled outside of driver control panels were Lenovo Vantage and a McAfee trial that we promptly uninstalled.

We've covered Lenovo Vantage a lot in recent reviews. To sum up, it's a single app that handles all system-level updates, including drivers and BIOS, along with hardware diagnostics, Wi-Fi security, and so on. Having all the functionality in one app instead of spread out among multiple smaller applications is convenient. Updates to Vantage come through the Microsoft Store.

Now that we've gotten to know the ThinkPad X1 Yoga Gen 5, let's take it out for a spin to see how it performs...
NEXT PAGE