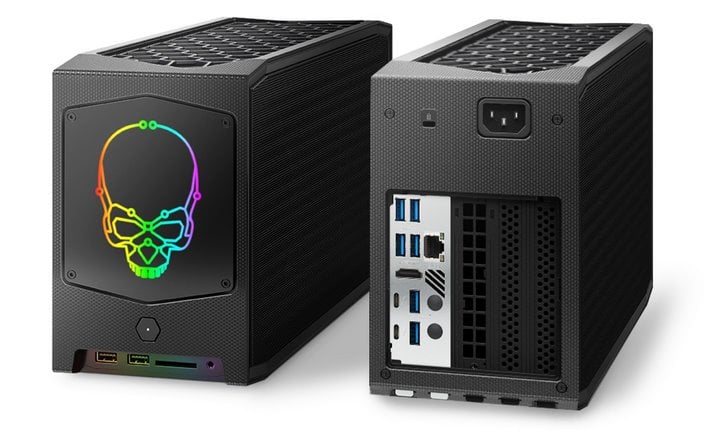 We’re long-time proponents of big, bold and bodacious desktop systems around here. We’ve been evaluating the latest and greatest PC hardware for over two decades after all, and many of us have ben PC enthusiasts even longer than that. As much as we dig fully-loaded, high-end desktops though, there’s just something awesome about a powerful small form factor system like the Intel NUC 11 Extreme we’ll be showing you today, codenamed “Beast Canyon”.

Intel’s latest enthusiast-class NUC takes all of the goodness of the NUC 9 Extreme—like the modular design and upgradable compute module—and expands the size of the chassis to accommodate a wider range of hardware, including full-sized graphics cards. The machine also features the newer Tiger Lake-H 11th Gen Core platform.

Intel NUC 11 Extreme systems are available from a variety of partners in myriad configurations, from barebones rigs with integrated graphics all the way on up to RTX 30-series equipped powerhouses, with multiple M.2 drives. The configuration we got to test hits the sweet spot, but we’re getting ahead of ourselves here. Let’s breakdown the specs, and then we’ll dig in to our setup and see how she performs...

Find Intel NUC 11 Extreme Kits @ Amazon
The foundation of the NUC 11 Extreme is determined by the included compute module. The higher-end NUC11BTMi9 features a Core i9-119000KB, while the more mainstream NUC11BTMi7 is powered by a Core i7-11700B. Both processors are 8-core / 16-thread machines from the Tiger Lake-H family, but note that while these mobile processors share their CPU core architecture with Rocket Lake-S 11th-Gen desktop processors, they come configured for much lower 65W TDPs. 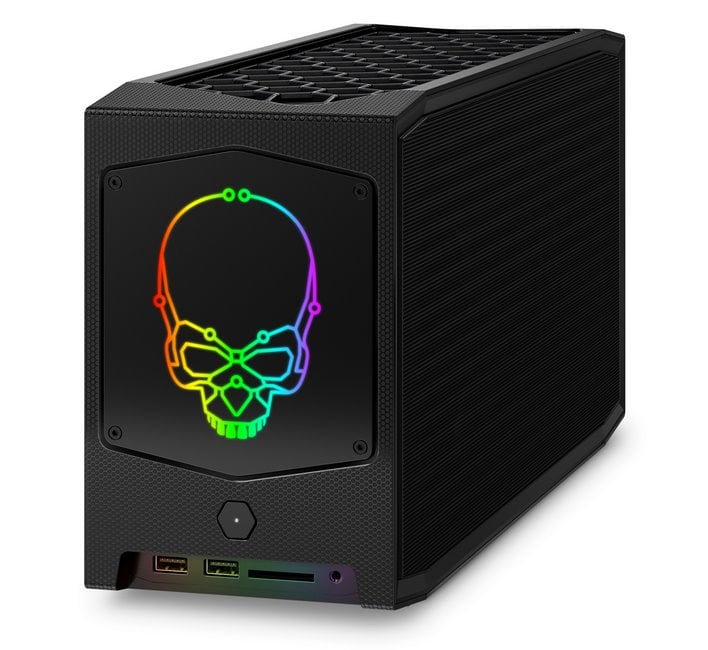 In a barebones configuration, NUC 11 Extreme systems feature integrated Intel UHD 350 series graphics, and the platform offers a pair of SO-DIMM memory slots (up to DDR4-3200 when not overclocking), up to 6 M.2 slots (RAID capable), 2.5G Ethernet, Intel Wi-Fi 6E AX210 and Bluetooth 5.2, and all of the goodies associated with Intel’s latest mobile platforms, like Thunderbolt 4, USB 3.1 Gen 2, and support for Optane memory.

The larger chassis design of the NUC 11 Extreme allows the system to accommodate full-sized, dual-slot wide graphics cards, provided the system’s integrated 650W power supply is up to snuff. The NUC 11 Extreme's chassis exterior also features addressable RGB lighting that illuminates the skull on the front and casts light out of the lower front quarter onto wherever the system is resting. 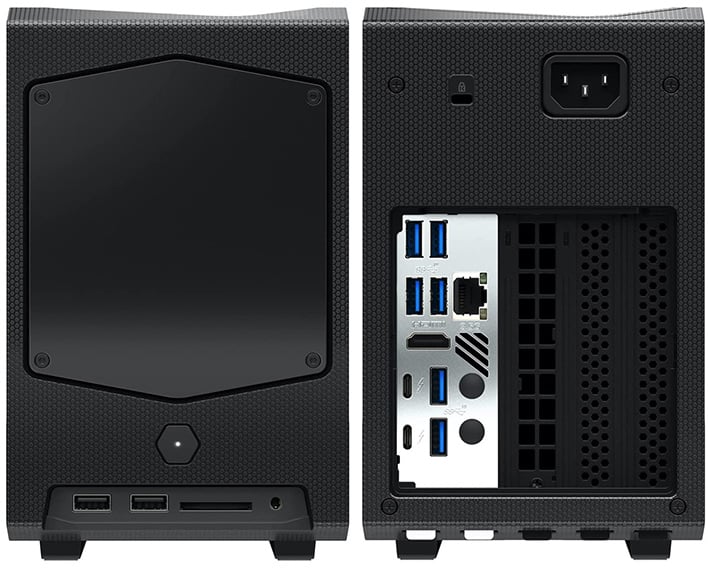 The NUC 11 Extreme also offers a flexible array of IO. The front of the system is home to the power button, a pair of USB-A ports, a UHS-II SD Card reader, and a combo 3.5mm audio jack. The back side of the system is home to six more USB-A ports, two Thunderbolt 4 USB-C ports, and HDMI output, and an Ethernet jack. Of course, there will be additional display outputs after installing a discrete GPU.

The NUC 11 chassis is vented all around, and has fans almost everywhere. There are three exhaust fans at the top of the system, the compute module is actively cooled, and the SFX-sized power supply situated at the front of the system has a fan as well. Plus, whatever graphics card is installed in the system will have its own fans, too. Our system featured an ASUS GeForce RTX 3060 with dual cooling fans, so all told there were 7 fans in what is a relatively small system. Even though things are cramped inside the compact chassis, cooling and noise are a non-issue for the most part – we’ll dive deeper into cooling and acoustics a little later. 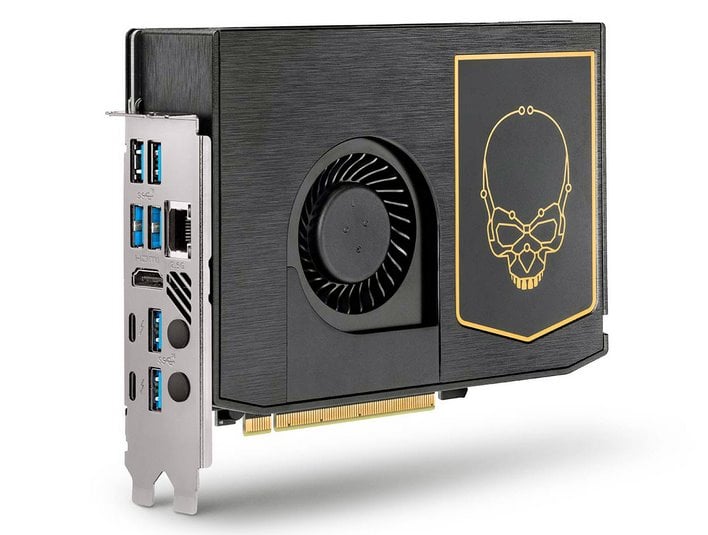 Assembly / disassembly of the NUC 11 Extreme is surprisingly easy for a small form factor system. It’s not as straightforward as a standard mid-tower, but four screws at the back are all you need to remove to gain access to the NUC 11’s internals. Disengage the four screws on the back and the rear cover pops off. Then you can simply slide off both side panels, and using the two levers at the top, you can lift the top three fans up. The top three fans are installed in a cage with a hinge. 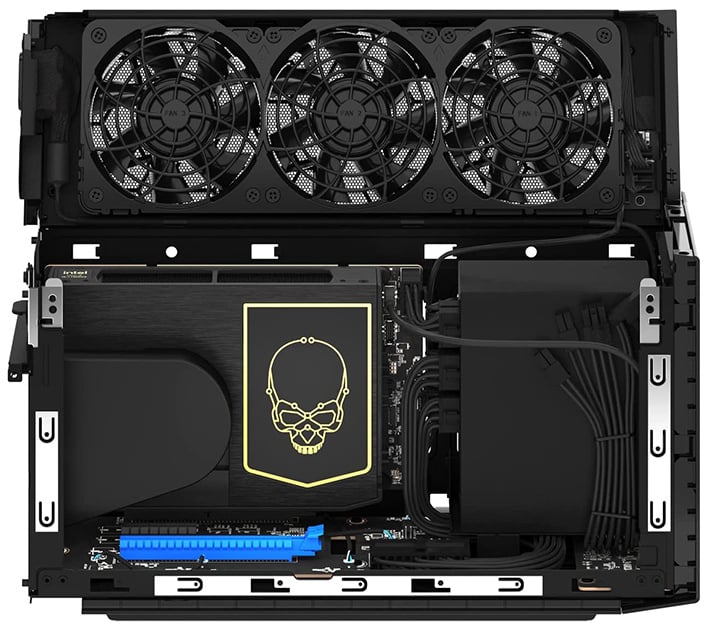 Once inside, you can remove the compute module to install / replace M.2 SSDs or memory and there are a pair of expansion slots, one PCIe x4 and one PCIe x16.