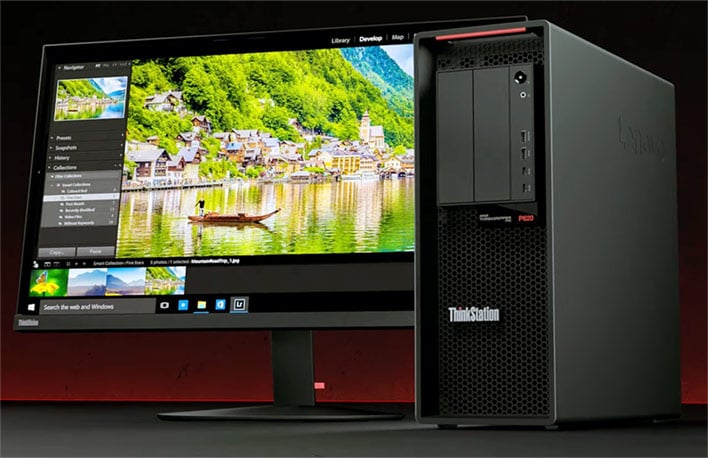 When it comes to high-end content creation, time is money. Businesses with employees that are stuck sitting around waiting for compute-intensive tasks to finish, simply can't get as much accomplished as those with speedy hardware that can power through the most demanding tasks. Tons of parallel processing power and professional-tier graphics cards for these scenarios don't come cheap, but they can certainly pay dividends in terms of efficiency and time saved. That's the story of Lenovo's ultra-powerful ThinkStation P620 workstation, which is on our test bench today.

Breaking this system from its cardboard container caused us to stop and admire all the hardware tucked away inside. That same feeling overcame us again when the CPU section of Task Manager lit up the screen with gobs of hardware threads (powered by its beastly AMD Ryzen Threadripper PRO CPU). And while NVIDIA's Ampere GPU may dominate the gaming world (though it's quite hard to come by of course), the P620's Turing-based NVIDIA Quadro RTX pro graphics card can render the most complex scenes with ease. But let's not get too far ahead of ourselves; first let's meet the ThinkStation P620 and see what Lenovo's workstation workhorse has under the hood... 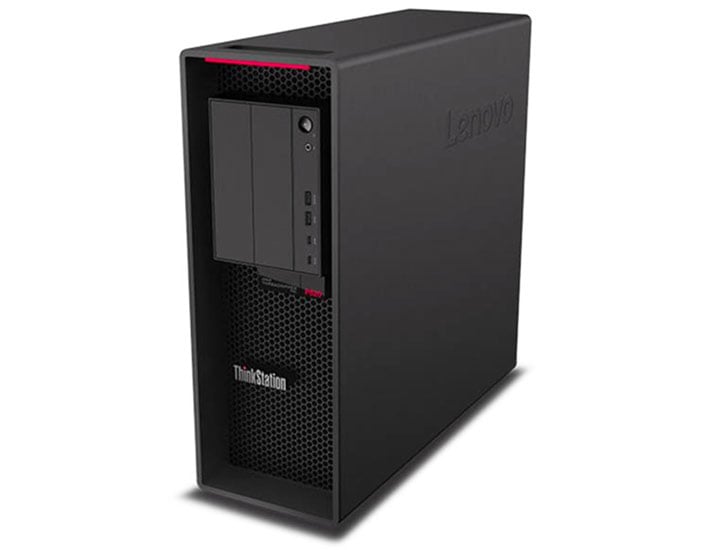 The ThinkStation P620 starts with AMD's Threadripper PRO 3995WX processor. The Zen 3 tech at the heart of the Ryzen 5000 family hasn't made it to the workstation offering in AMD's CPU lineup just yet. When a task needs all the parallelism it can get, we turn to an old friend, and a pretty capable CPU architecture of its own - Zen 2. This particular model tops AMD's Threadripper Pro family with 64 cores and 128 hardware threads. There's a base clock of a meager 2.7 GHz, but this monster processor can hit speeds up to 4.2 GHz as long as there's room in its 280 W thermal budget. That's actually a tick off of the non-PRO Threadripper 3990X's 2.9 GHz base and 4.3 GHz top-end boost. 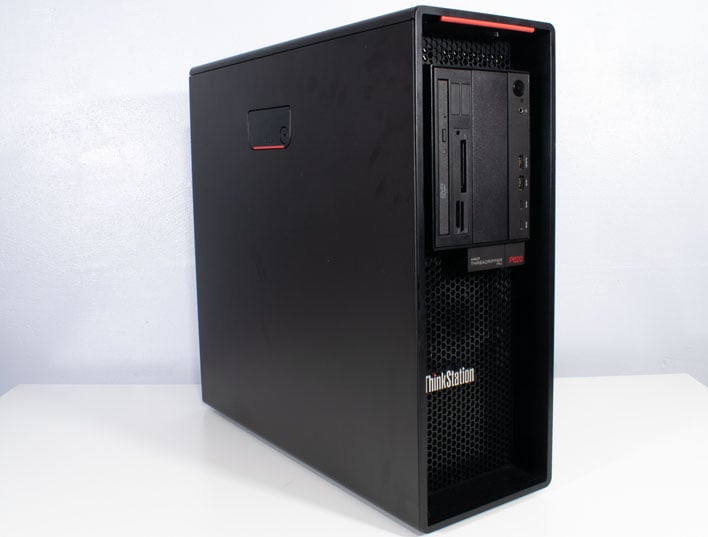 The Threadripper PRO makes up for that slight speed reduction with a handful of useful professional-focused features. Using a Threadripper PRO processor in the ThinkStation P620 means a step up to the WRX80 chipset, which enables eight memory channels rather than the TRX40's four. Doubling the theoretical bandwidth is great, but that means buyers will need to fill all eight DIMM slots in this system which, as we'll see in a moment, Lenovo didn't do with our test unit. The WRX80 chipset has RDIMM support, however, for registered memory as opposed to the TRX40's unbuffered-only ECC support. The WRX80 also has support for AMD's network management-focused AMD PRO Technologies.

Lenovo outfitted the P620 that we're looking at with 32 GB of memory in a dual-channel configuration. Since the Threadripper 3995WX has eight memory channels to satisfy, however, the P620 can handle up to 512 GB of system RAM across eight 64 GB DIMMs. For primary storage, Lenovo included a 512 GB PCI Express NVMe M.2 SSD, although the system can swallow a pair of NVMe SSDs in a RAID-0 configuration if need be. If that's not enough, four-way NVMe PCI Express cards are available from Lenovo when ordering, which will result in effectively limitless storage. Getting back to the memory for a moment, we didn't have any RDIMMs lying around so that extra bandwidth will have to go unutilized. 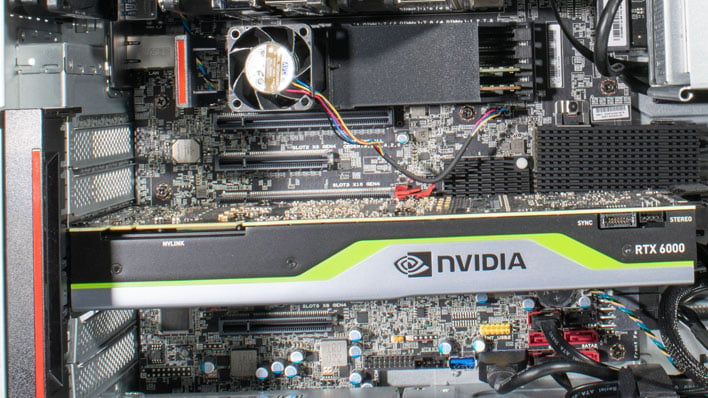 Threadripper PRO processors don't have any onboard graphics, so a graphics card is required. What is optional, however, is the NVIDIA Quadro RTX 6000 professional GPU in our test unit. This is effectively a professional version of the GeForce RTX Titan. This card has 4,608 CUDA cores, 576 Tensor cores, and 72 RT cores with a maximum boost clock of 1,770 MHz. 24 GB of GDDR6 memory connects to a 384-bit path to the GPU at 14 GT/s for a grand total of 672 GB per second of throughput. Ampere might be the talk of the town, but the Quadro RTX 6000 is no slouch. As a professional graphics card, there's no HDMI connector in sight; instead there are four full-sized DisplayPort 1.4 ports and a USB-C port that also outputs DisplayPort. 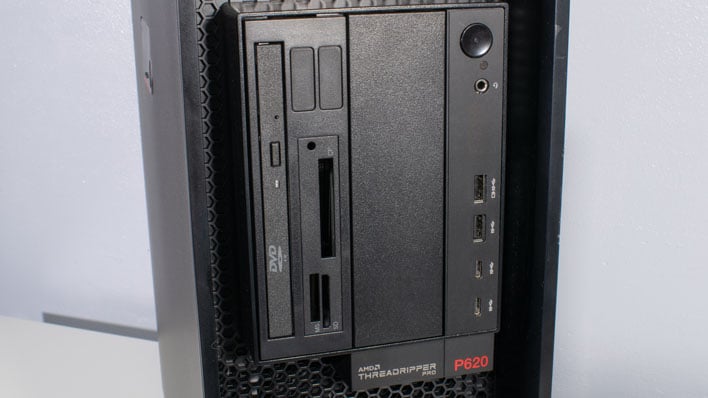 The professional-focused loadout doesn't stop at just the CPU, platform, and graphics, though. Lenovo gave the ThinkStation P620 a Marvell 10-Gigabit Ethernet controller. The front bay houses a pair of 10-Gigabit USB 3.1 Gen2 Type-C ports and an all-in-one media reader. Thought to be lost to time, Lenovo even offers a slim DVD-RW drive as an option. Around the back we find a pair of PS/2 ports for keyboards and mice, two USB 2.0 ports, and four USB 3.2 Gen 2 ports that can also push 10-Gigabit speeds. Audio is a basic affair with just 1/8" stereo line out, line in, and mic connectors.


Inside the ThinkStation P620


Getting into the ThinkStation P620 is pretty simple and doesn't require any tools. On the left-side door is a latch, which exposes a car door handle-style lever that releases the door from the side of the system. There's a key entry here, too, and Lenovo includes two keys with the ThinkStation P620. Closing up the system is just as easy as opening it. Re-attach and swing the door back up and it'll pop into place. Press down on the handle and it'll recess back into the panel.

On the inside, the ThinkStation P620 must be a bit of a marvel of thermal engineering, since the Threadripper PRO CPU has a 280-Watt TDP and its 64 cores need to be kept cool. Despite the huge TDP, the cooler has just a pair of smaller fin arrays covered by two 80-millimeter fans. Plenty of fresh air comes in the front of the system, however, since the entire thing is a honeycomb-shaped mesh that's completely open. Compared to some enthusiast cases that choke off airflow with tempered glass panels, this thing is breathing easy. Despite the pint-sized cooler, the processor never gets overly hot, although the ThinkStation P620 makes a bit of racket at full speed. The system's eight registered ECC DIMM slots all get active cooling, as well. 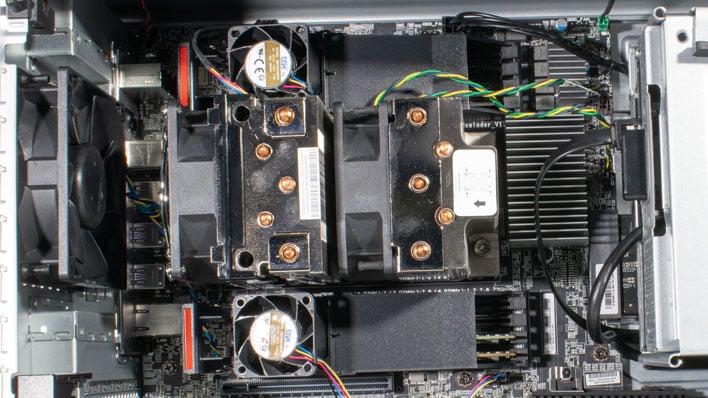 On the GPU side, NVIDIA's Quadro RTX 6000 has its stock thermal solution, which has a blower-style fan and pushes air out the rear. Lenovo uses a clever locking system that supports the weight of the GPU at the rear and not just resting on the slot and rear plate. If we remove the Quadro graphics card, we can see a total of four PCIe 4.0 x16 slots, each of which can accommodate their own graphics card. However, once you get into double-slot cards, only three of those cards will fit due to how the slots are arranged. Two more x4 slots are interspersed as well.

Below the motherboard sits the hard disk cage and power supply. The drive cage can handle a pair of 3.5" drives that ride on tool-free plastic sleds. The motherboard also has a pair of M.2 slots covered by enormous heatsinks due to their proximity to the graphics card. Lenovo also sells optional PCIe 4.0 cards that fit into the pair of x4 slots we mentioned earlier. There's no shortage of expandable storage options; our review unit came with a 512 GB M.2 NVMe SSD.

Finally, the 1000 W power supply has an 80-plus rating and a novel edge connector to deliver power to the system. While it may be user-replaceable, it's not a standard part by any stretch of the imagination. Rather than rely on cabling like traditional power supplies, all of the power goes directly into that edge connector's slot on the motherboard, which then distributes electricity where it needs to go at the proper voltage and current. While the Quadro has its own cabling, it actually draws power from the motherboard, not the power supply directly.

The ThinkStation P620 came to us running Windows 10 Pro with minimal extra software installed. Everything that appeared in the Windows control panel's list was related to drivers or was installed as a part of Windows. We've always appreciated fresh installations of Windows without a bunch of bloatware, and there's no doubt that Lenovo focused on this with these ThinkStation systems since they're heavy-duty productivity machines.

On the other hand, the ThinkStation P620 carries a bevy of independent software vendor (ISV) certifications for all kinds of media and content creation software. Adobe, AVID, Autodesk, PTC, and Siemens have all certified this workstation to work with their software products. Lenovo has an ISV website set up so that interested buyers can check that their software will work with the system. Select the appropriate system and software package and certified drivers are available for download directly from Lenovo.

It's time to dive into system benchmarks to see how this behemoth runs on a host of productivity software...
NEXT PAGE