NVIDIA GeForce RTX 3060: The Most Affordable Ampere GPU Yet 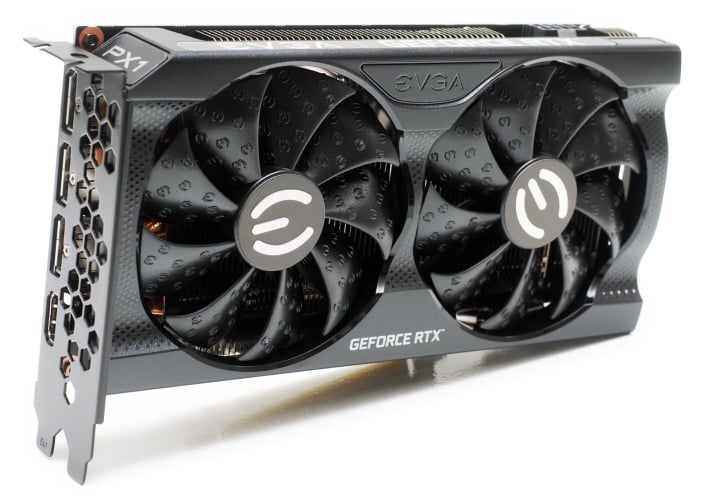 NVIDIA is launching its latest Ampere-based GPU today, targeting the sweet-spot of the PC gaming market, the GeForce RTX 3060. The GeForce RTX 3060 was announced post-CES 2021, all the way back in mid-January, but cards are going on sale today.

In addition to the relatively early initial reveal, NVIDIA is doing a few other things a bit differently with this launch. For one, we’d be remiss if we didn’t mention last week’s announcements regarding specialized CMP HX mining GPUs and the GeForce RTX 3060’s intentionally gimped mining hash rash rate, when it comes to the Ethereum algo at least. On top of those two things, which have been the source of much debate, NVIDIA has also chosen to eschew a Founder’s Edition this time around. All of the GeForce RTX 3060 series cards that hit store shelves today will come by way of NVIDIA’s board partners. And of course, there’s the card’s 12GB of memory, which is 50% more than a higher-end GeForce RTX 3060 Ti memory configuration.

Needless to say, despite being brand new, the GeForce RTX 3060 has plenty of back-story. But we’re here today to see how the card fits in the current gaming GPU landscape. To that end, we’ve got one of EVGA’s GeForce RTX 3060 XC Black Gaming cards on hand, which we’ll put through its paces in a just a bit. First up, we’ve got some specs and features to cover... 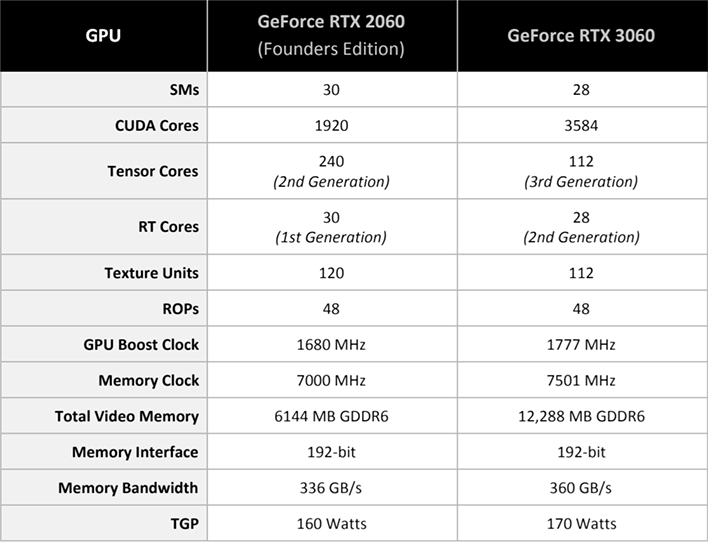 If you somehow missed all of those articles and want the full scoop on Ampere and its many features, now's the time to pause and go check them out. In them, we explain the enhancements NVIDIA introduced with Ampere, from its new internal data paths, fresh CUDA, RT, and Tensor cores, and discuss many new features, like NVIDIA RTX IO, NVIDIA Broadcast, NVIDIA Reflex, Omniverse Machinima, and more. 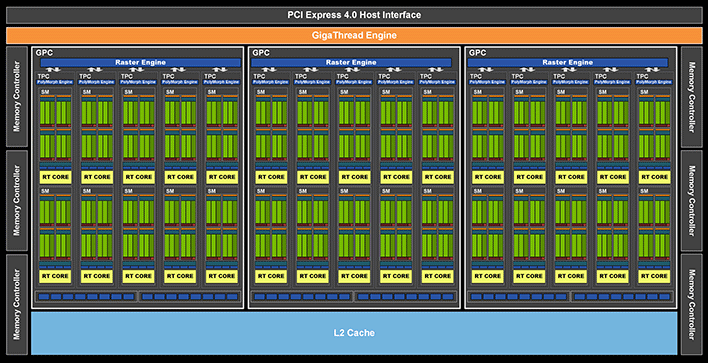 The GA106 is fabricated on Samsung’s 8nm NVIDIA custom process and is comprised of approximately 12 billion transistors. Although the GPU in its full configuration has 30 Streaming Multiprocessors (SM), 28 are enabled on the desktop GeForce RTX 3060, which is actually less than the mobile variant that packs the full complement of SMs.

There are 128 CUDA cores per SM, for a total of 3,584, four Third-Gen Tensor cores per SM (112 total), and 28 Second-Gen RT cores enabled on the desktop RTX 3060. Complementing all of those cores are 48 ROPs and 112 Texture Units. The GPU has a typical Boost clock of 1,777MHz and it is linked to 128GB of standard GDDR6 memory (not the GDDR6X of the RTX 3080/3090) via a 192-bit memory interface, with an effective data rate of 15Gbps (7.5GHz memory clock), which results in up to 360GB/s of peak bandwidth. Efficiencies in the new Ampere architecture allow the GA106 GPU at the heart of the RTX 3060 to make better use of that bandwidth as well, versus previous-gen architectures.

At NVIDIA's rated specifications, the GeForce RTX 3060 offers up 12.7 shader TFLOPs, 24.9 RT TFLOPs, and 102 Tensor TFLOPs of compute performance. Versus the previous-gen GeForce RTX 2060 (non-Super), the new GeForce RTX 3060 is an across-the-board upgrade. 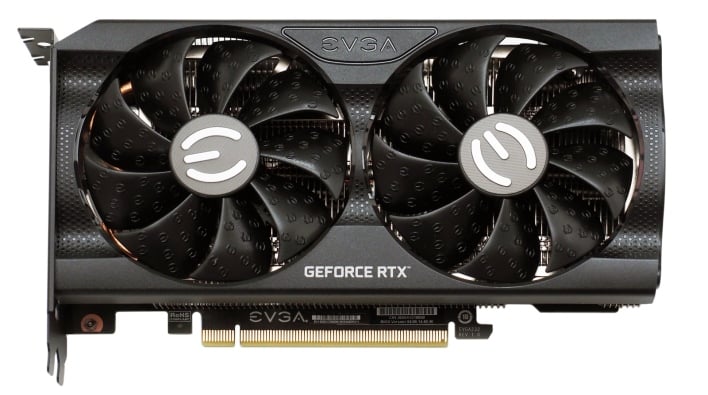 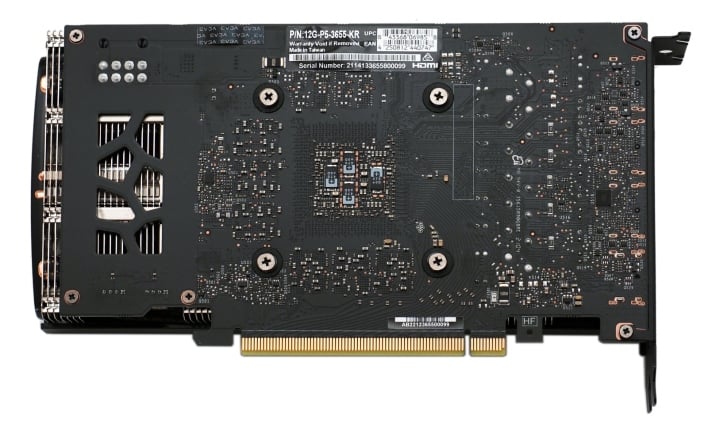 The EVGA GeForce RTX 3060 XC Black Gaming sticks to NVIDIA’s reference specifications, but it has some of EVGA’s distinctive flavor. The card is just shy of 8” long, though the PCB is somewhat shorter overall and is only 7.5”.

Aesthetically, the EVGA GeForce RTX 3060 XC Black Gaming resembles many of EVGA’s current-generation cards. It has a similar design language, with the angular front fan shroud, and dual axial-fans with “E” logos scattered about all of the fan blades. This particular card is only 2 slots wide (not 2.5 slots) and features a densely-packed cooler, with an anodized aluminum heatsink assembly, and copper heat pipes that extends over the GPU and back around atop the VRM. EVGA also outfits the card with a stylized back-plate, with hexagonal ventilation cut outs. We should also mention, that the backside of the PCB has some cut-outs as well, to allow air to completely pass-through the card. 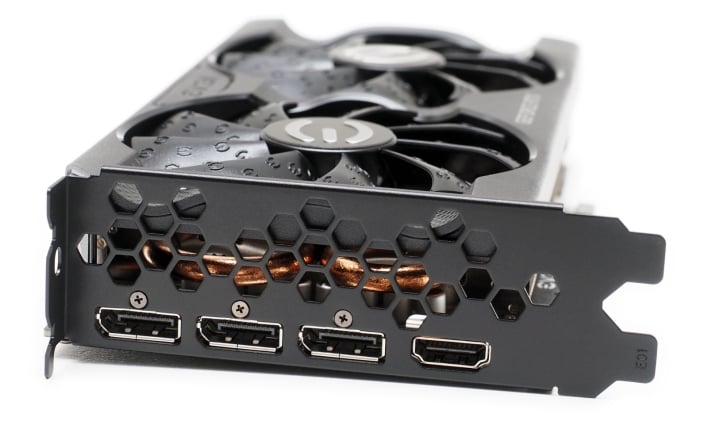 The GeForce RTX 3060 has a 170W TDP (600W PSU recommended) and a single 8-pin PCI Express power connector, though some of NVIDIA’s partners that push the out-of-box overclocks may stick some additional power connectors on-board. In terms of display outputs, the GeForce RTX 3060 has triple full-sized DisplayPorts (1.4a) and a single HDMI 2.1 output.

That about does it for the particulars, let’s get to some numbers...