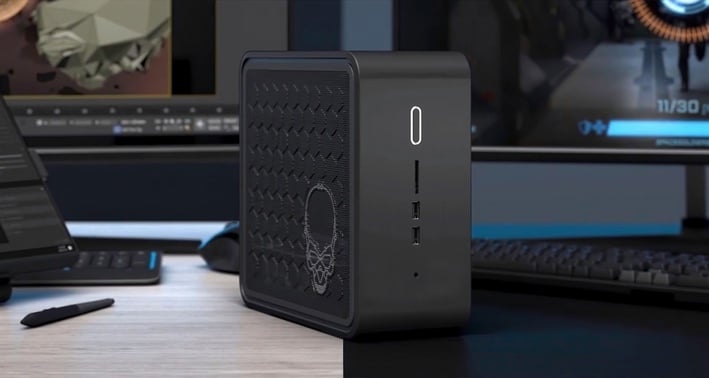 We got our first taste of Intel's new NUC 9 Extreme, codenamed Ghost Canyon, back at CES 2020 earlier this year. Like previous Intel NUCs, the NUC 9 is a small form factor system that will be sold in a variety of flavors. The NUC 9 extreme will be offered in barebones configurations, where customers must purchase memory, storage, and an OS on their own, or as fully configured systems, with a mix of CPU options. This time around, though, Intel is leveraging its innovative Compute Element to enable future CPU and IO upgrades, and is also empowering ecosystem partners to offer customized versions of the Compute Element platform as well.

The Intel NUC 9 Extreme Ghost Canyon is somewhat larger than previous-generation NUC systems, including the relatively powerful Hades Canyon that featured discrete Radeon Vega graphics. The chassis has a volume of 5 liters, with an internal power supply, a couple of expansion slots, multiple M.2 slots, and even a couple of chassis fans to assist the active cooler on the Compute Element. We’ll dive in deeper shortly, but for now let’s get some of the particulars out of the way – check out the specs below, then we’ll rip the NUC 9 open, before putting in through an array of benchmarks... 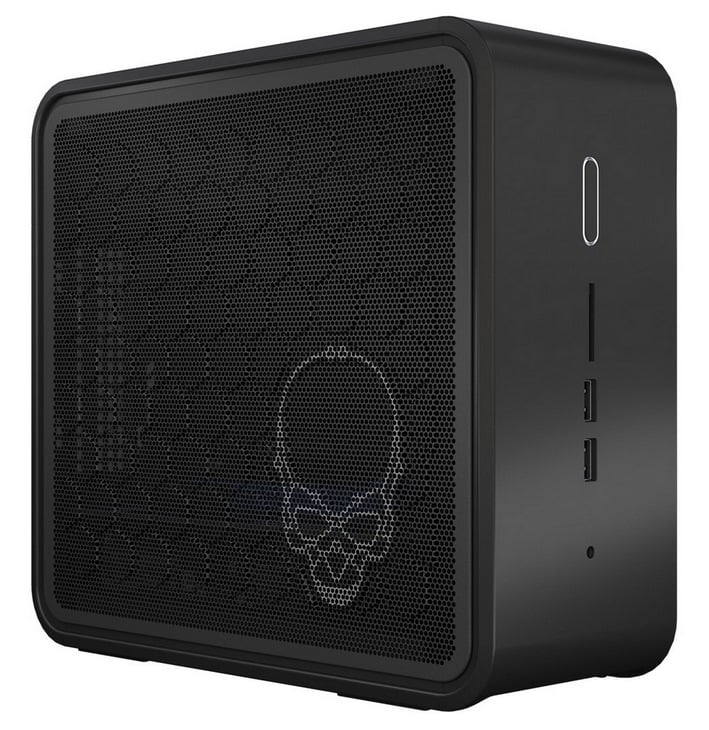 Find The Intel NUC 9 Extreme @ Amazon
The Intel NUC 9 Extreme will be offered in Core i5, Core i7, and Core i9-based versions. The particular system we’re looking at is the NUC9i9QNX, outfitted with an Intel Core i9 CPU, 16GB of RAM, an Intel Optane 905P boot drive, a secondary Kingston SSD, and an ASUS GeForce RTX 2070 discrete GPU.

The NUC 9 is built around Intel’s NUC Compute Element, which is essentially places the CPU, chipset, IO, and cooler onto a removable add-in card. The first wave of NUC Compute Elements are based on 9th Gen Comet Lake-H processors, similar to what can currently be found in some high-end gaming notebooks and mobile workstations. So, while it's not based on Intel’s latest processor architecture, it's still relatively powerful nonetheless. The particular system we have on-hand for evaluation features a Core i9-9980HK 8-core processor (16-threads), with a base clock of 2.4GHz and a max turbo boost up to 5GHz, which is well-equipped for lightly-threaded and more heavily-threaded workloads. 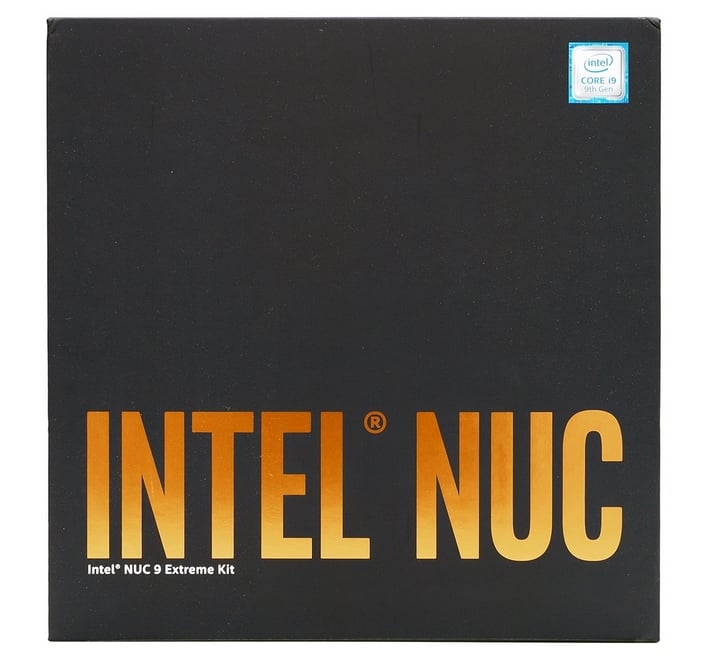 The Intel NUC 9 Extreme ships in some wild packaging. There is a relatively non-descript cardboard outer shell, with some simple branding on the front and system specification on the rear. Unwrap that outer shell, however, and you’ll find a hard, composite enclosure held closed by a nylon belt with a heavy-duty metal buckle. 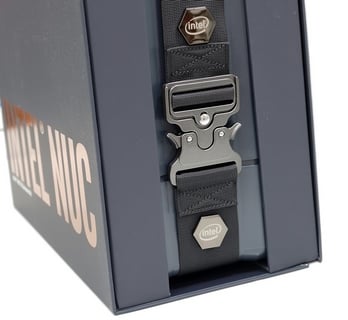 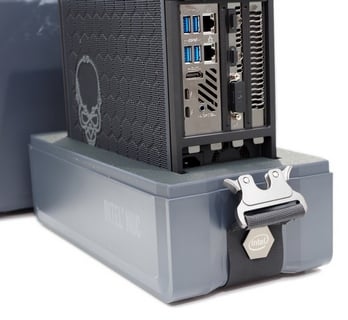 Disengage the buckle, and the top of the enclosure can be removed to reveal the NUC 9 inside. The system is held securely in place by form-fitting foam with the documentation and power cord hidden beneath the system itself. Unlike previous-gen NUCs though, there is no power-brick in the box. The PSU is inside the chassis this time around, so a standard power cord is included. 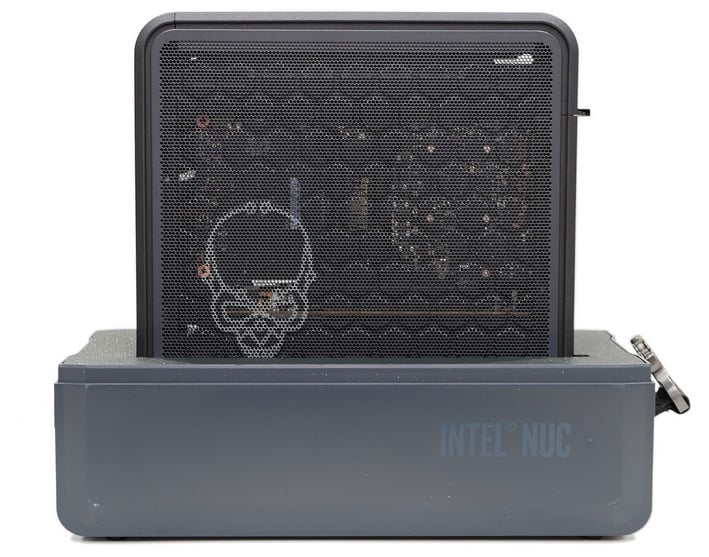 The NUC 9 Extreme’s 9.37 x 8.5 x 3.78" chassis looks clean and assuming from the front, but the sides and top are effectively large air vents. The side panels are comprised solely of hexagon-shaped honeycombs, with circular perforations, and the top and bottom have linear vents that cover most of their surfaces. To keep powerful hardware cool in a chassis this small, plenty of air is required and Intel clearly designed this chassis with air-flow in mind. 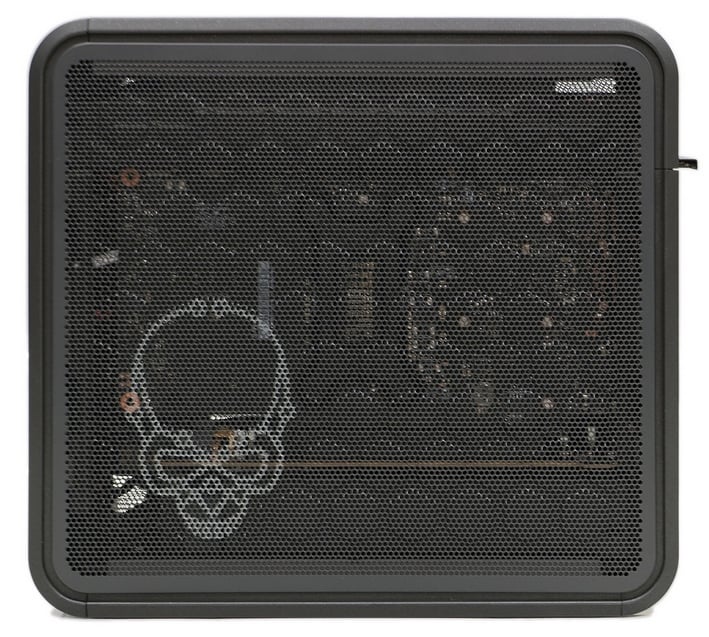 With a graphics card installed, its fan can draw cool air in from outside the system, which has obvious cooling benefits (assuming a reasonable ambient room temp). But dust can also freely flow into the system with is current design – it would be nice for some fabric cloth dust filters to be incorporated in a future revision. 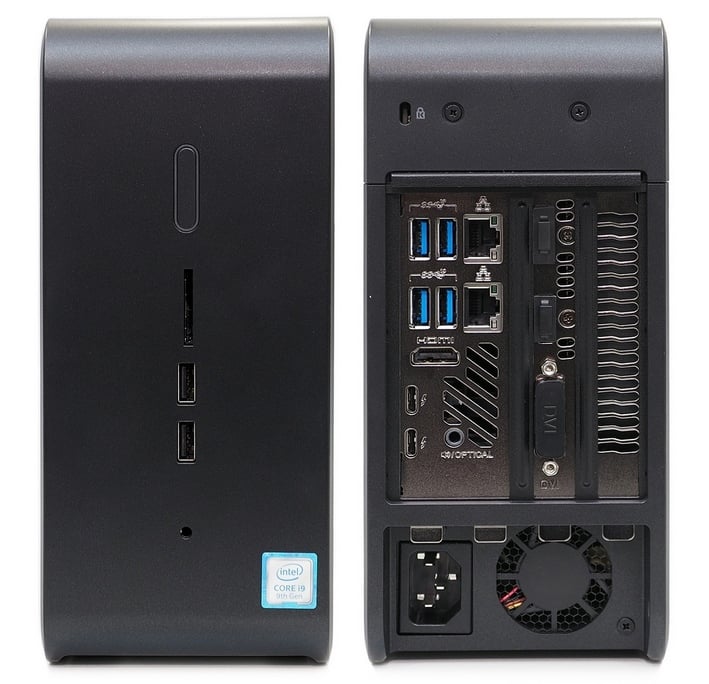 In terms of IO, the front of the NUC 9 features a pair of full-sized USB ports and an SD card reader, adjacent to the power button. The rear IO panel is home to a pair of RJ45 LAN jacks, a 3.5mm audio jack, a lock port, four more full-sized USB ports, an HDMI output, and two USB-C Thunderbolt 3 ports. Our particular system is outfitted with an ASUS GeForce RTX 2070 GPU as well – its ports are on the right in the image above, but those will obviously change based on the GPU installed. 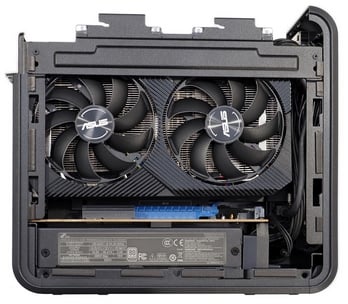 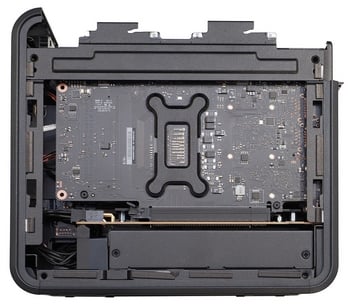 The design of the NUC 9 and Compute Element platform allow the Element to be plugged into an I/O expansion board. In the NUC 9 Extreme, two PCIe Expansion slots are available – one x16 and one x4 – along with a trio of M.2 slots. The system can accommodate two-slot wide graphics cards, up to 8” in length, like the ASUS GeForce RTX 2070 featured here. 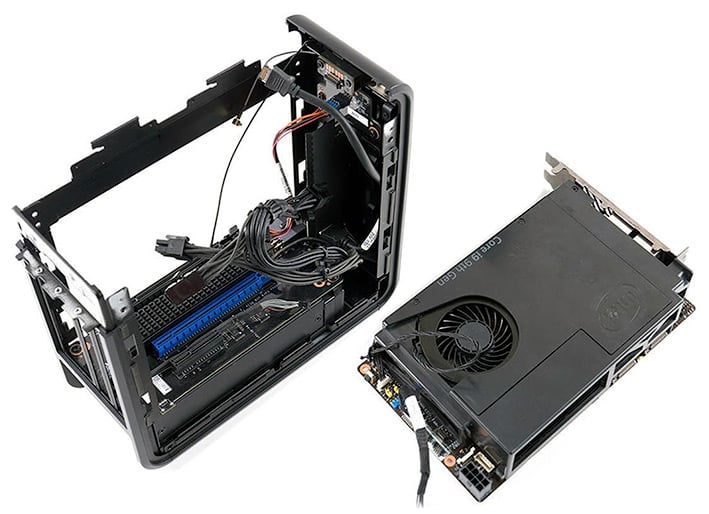 The Compute Element resides in the black slot on the far side of the board. The Compute Element houses the processor, chipset, memory, and IO and is designed to be upgradeable down the line. Due to the modular nature of the setup, Intel’s ecosystem partners are also able to design different chassis and expansion module, but leverage the same Compute Elements. The idea is to allow for quicker and simpler system integration, but also enable easier upgrades down the line that don't require replacing the entire chassis and power supply.

But there is still more to see, and we're sure you all want to know how the system performs...so let's move on...
NEXT PAGE